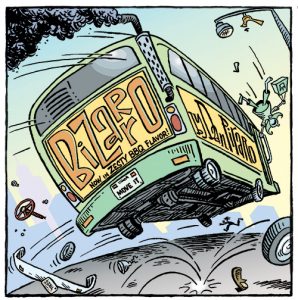 (Click any rectangular object in any cartoon to embiggenate it.) 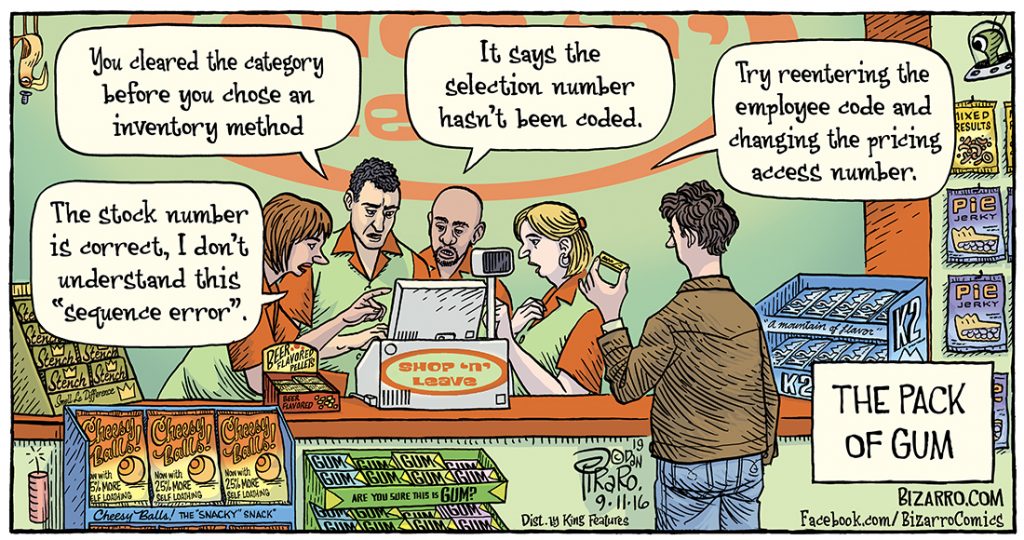 Bizarro is brought to you today by The Strange Girl Next Door.

Today’s big Sunday cartoon is about the mixed bag of convenience we get from technology. Historically speaking, each generation witnesses more change than the ones before it. A couple of thousand years ago, a person was lucky to come across a single new invention in their entire lifetime. Five hundred years ago, you might see two or three in a lifetime. A hundred years ago, during the Industrial Revolution, things really heated up and people’s heads were spinning with new inventions coming at them at the alarming speed of one every five years or so. Today, in the time it has taken me to type this paragraph, there have been as many new inventions as there are letters typed. How do I know this? Because of a little invention called lying with authority. I made all these figures up, but I’m guessing they’re more-or-less historically true up to that last one about each letter of this paragraph.

The larger point is that we tend to incorporate these inventions into our lives and then can’t live without them. Imagine if smart phones suddenly stopped working all over the world. Everyone would have to walk around shouting what we would normally be tweeting, and carry our food plates through the streets to show people what we ordered instead of just posting it on FacadeBook. It would be chaos.

Lastly, I recommend embiggenating the cartoon above so you can see all of the small jokes I incorporated into the product labels. I’m certain you will find and extra smile or two hidden on the shelves of the “Shop ‘n’ Leave”. 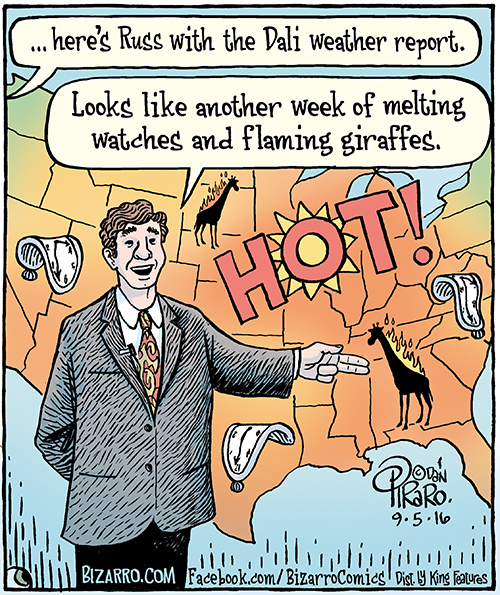 When I drew and submitted this cartoon (several weeks ago) I wondered if the weather would be hot when it published, but with the record heat worldwide in recent years, it wasn’t much of a gamble. Thanks and a shout-out to my email friend in Canada named Russell who suggested I do a pun on “daily weather report” using the name of the famous surrealist painter, Salvador Dali. Sadly, I’m afraid we’re all in for flaming giraffes and melting clocks for most of the rest of our lives––even the climate change deniers, who sweat at the same rate the rest of us do. 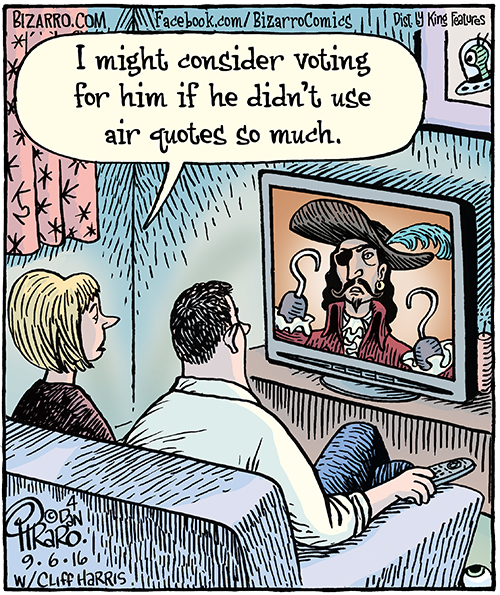 This pirate cartoon was suggested by my good friend, Cliff Harris the King of Wordplay. This isn’t wordplay, really, but I thought the hooks being mistaken for air quotes was amusing. And, since here in the U.S. the ultimate corporate pirate is shamefully close to the most powerful office in the world, it’s also fairly timely. (For those of you tempted to write something predictable about Hillary being a pirate, note that I said “corporate” pirate and her misdeeds have been in the world of politics, not business.) (For those of you tempted to say something predictable like “what’s the difference between politics and business?”, okay, you got me.)

Cliff has a book of clever wordplay and illustrations that makes a fun gift and is also fun to just have lying around your house. Snag one here while it’s still in its first edition! 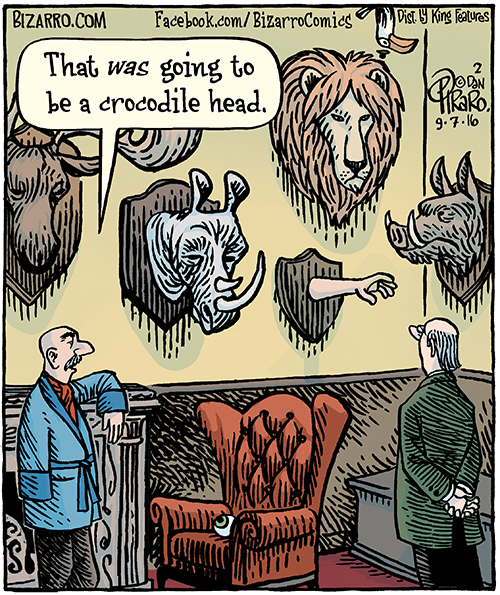 This hunter cartoon has a fun story behind it. The day that it published, several people contacted me via the Interwebs to tell me that there was a mistake in the picture, and they were right. Have you spotted it yet? I’m a stickler for details and so I had a good laugh at myself that I had not noticed it until readers pointed it out. I then posted it on FB and Twitter asking who else could catch it and most people responded accurately, but a few got lost in my Secret Symbols, like the eyeball in the chair, which are not mistakes and appear in most of my cartoons. The mistake I’m talking about has been corrected in the cartoon posted below and an explanation of it follows. So don’t scroll down yet if you want to see if you can find the mistake in the original first. 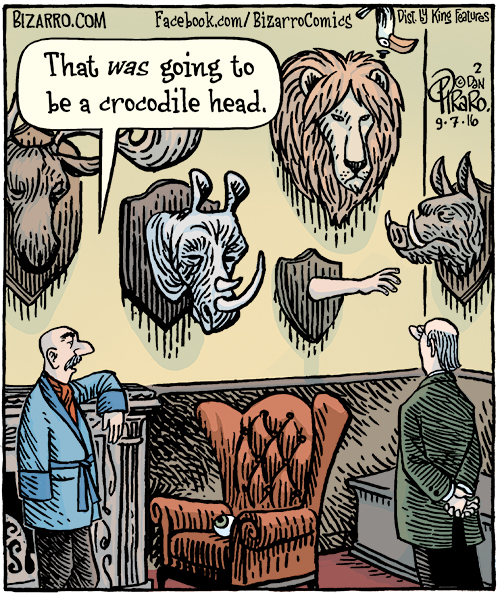 Observant readers will have noticed that in my original drawing, the hand the hunter mounted in the crocodile’s stead is a left hand, but the hand the hunter is missing is his right. In the second cartoon posted here I corrected the drawing. I’m not sure why I didn’t notice it when I drew it, I guess I was sleepwalking through my work that day and just drew the hand without thinking about which hand he was missing. I’m glad people caught it and told me so I could get a good laugh, though. As I am known to say, if you can’t laugh at yourself, you’re not allowed to laugh at others, either.

Several posters attempting to answer the question got lost in other kinds of arcane details, like the fact that if a crocodile had bitten off the man’s arm he would not have been able to get it back for his trophy room, but that’s easily remedied by imagining that the crocodile is highly allergic to human flesh and sneezed heartily before he could swallow. 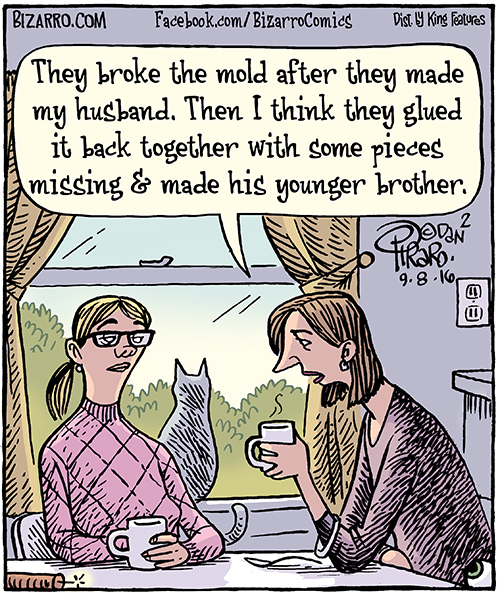 This brother-in-law gag is about an old expression “When they made him(her) they broke the mold”, meaning that a person is unique, and also about something we’ve all experienced where siblings within the same family can be very alike and yet utterly dissimilar. I could list examples from my own life but then people might get embarrassed. 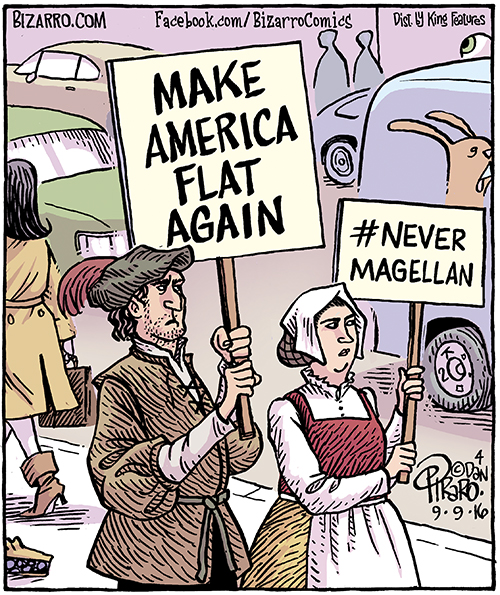 If I may be immodest for a moment, I’d like to say that this cartoon about #NeverMagellan is one of my favorites in forever. It’s strange and funny and sad and true. And it says something about the Trump campaign and its followers that isn’t often addressed: Going backward in time with protectionism, tough-talk, racial innuendo, insults, pride in ignorance, denial of science, big walls that keep “bad guys” out, etc., is something that has been tried again and again in times of heightened fear but never works. Is the world a dangerous place and are there bad guys who mean you harm? Yes––always has been, always will be. Can a tough guy protect you? Not in a democracy. You need a ruthless dictator and closed borders for that kind of “protection”. Are the people who live in countries like that happy? Ask people who lived behind the Iron Curtain or any number of other countries with ass-kicking “strongmen” in their front office.

“If you want total security, go to prison. There you’re fed, clothed, given medical care and so on. The only thing lacking… is freedom.” ––Dwight D. Eisenhower 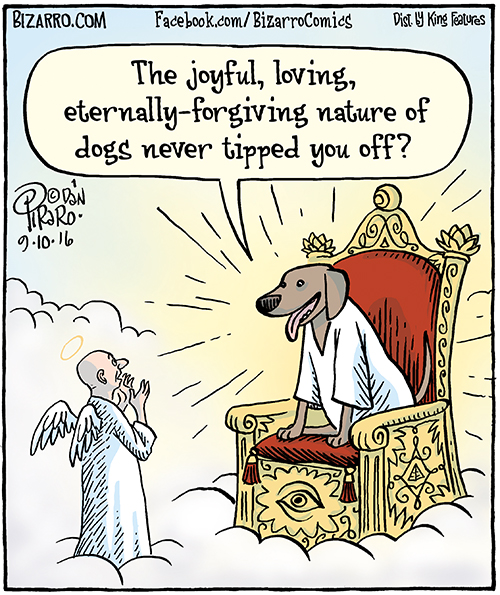 I’ve long thought that dogs more often exhibit the kinds of traits we attribute to gods than do humans. I think the popular bumper sticker says it brilliantly––“Dear God, please help me to be the kind of person my dog thinks I am.” And of course, none of us are.

I got lots of positive messages about how much people liked this dog cartoon, one predictable comment from someone who thought I was insulting their Christian god, and one cliche comment right out of the scripts at Fox News which I’ve gotten each time I poke fun at Christian mythology, asking if I would dare do this cartoon about “the Muslim god”. In response to this comment I always hasten to point out that Christianity and Islam are offshoots of ancient Judaism (itself an evolution of previous mythologies) and that historically speaking, all three of those religions worship the same “God of Abraham,” even though many of their modern followers have long forgotten that fact. My favorite oddball comment was someone who asked me if I was a member of the Illuminati because I had put an eyeball and a pyramid on god’s throne. No, I’m not. Cartoonists deal in cliches to get ideas across and those seemed to fit.

If you’ve read this far I deeply appreciate your effort and hope you found it enjoyable. As the newspaper industry dwindles, most of my readers receive it for free on the Internet. If you’re one of those folks, I humbly ask that you consider a monthly contribution to my efforts or a one-time donation, which you can accomplish by going here. Much appreciated, Jazz Pickles!

Another way to support me and Olive Oyl is to purchase a signed and numbered, limited edition, color, framed, fine art print of one of my favorite Bizarro cartoons from this site. They also have a small number of original black and white ink drawings from Bizarro. Thanks!