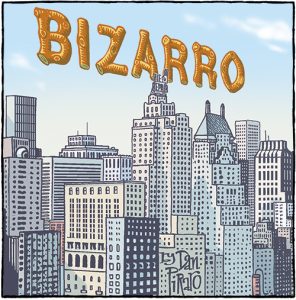 (To embiggenate any image, click on your favorite color in that cartoon.) 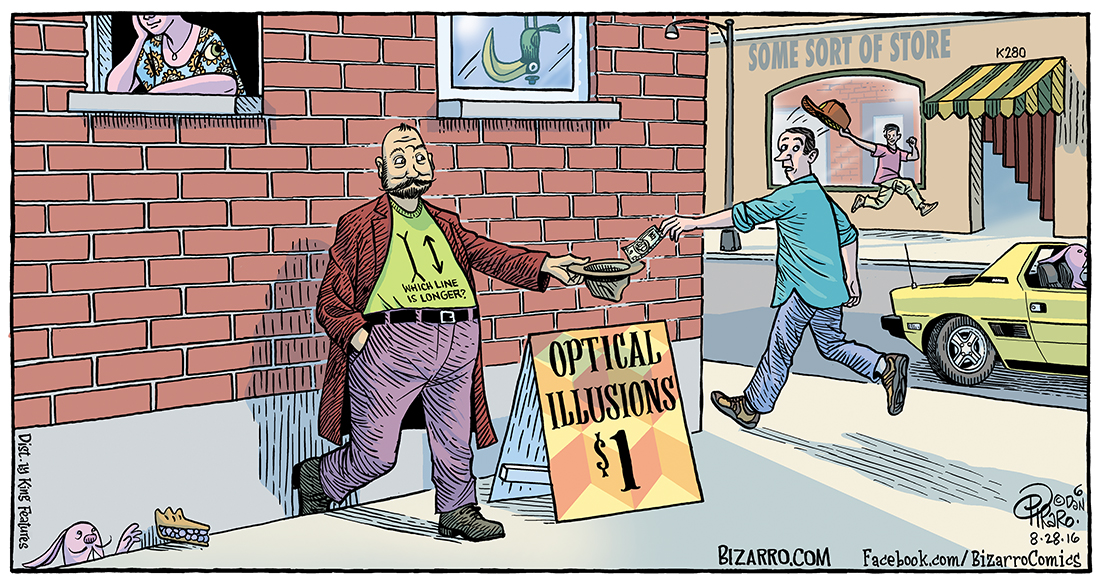 Bizarro is brought to you today by A Reason To Look Forward To Mondays. Or Not.

I’ve enjoyed optical illusions since childhood, so this cartoon about them was fun to draw. Unfortunately, you can’t incorporate most optical illusions into a street scene (like this one, which only appears to be moving), so I had to rely on tricks of perspective and such, most of which were inspired by the great draftsman, M. C. Escher. I don’t know how many illusions there are in this picture, but here’s a list of the ones I can see. 1) Window at top left is the wrong perspective for that wall 2) Pie in lower left corner is too far back not to hit wall (which also makes it look like it’s floating) 3) Man’s foot disappears behind line where sidewalk joins the wall 4) Same man has classic optical illusion on T-shirt (both lines are the same length) 5) Same man’s face looks like a different man’s face if you turn it upside down (an ancient classic illusion) 6) Stick inside folded sign is wrong perspective 7) Man giving money could not reach hat from where he stands 8) Street lamp across street crosses in front of wall in foreground 9) Boy stealing hat from across street 10) Stairs inside doorway across the street are sideways 11) Tire on sports car (1971 Fiat X1/9, by request from a reader) is wrong perspective. 12) background colors on sign is the classic box illusion, seen here. That’s all I can find, let me know if you find more. I didn’t list the two bunnies or the upside-down bird because those things could exist in that space. 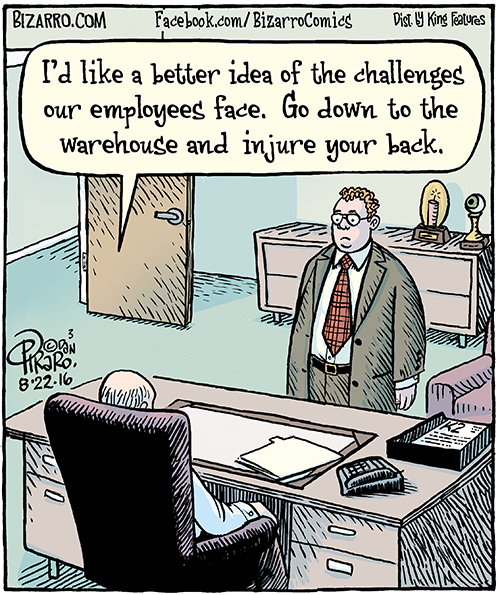 Have you ever worked for a boss who seemed to care about his employees but didn’t quite “get it”? I haven’t, but I’m guessing other people have so here’s a cartoon sort of kind of about that. 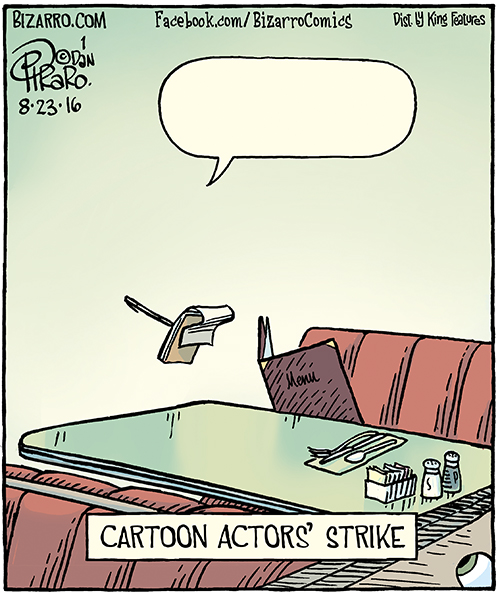 I’ve complained before about people taking my cartoons and changing them for their own purposes and it would seem that with this cartoon I’ve given them the perfect template to do just that. But I’ve also found that most people who do that kind of thing have very little imagination or creativity (hence their need to steal other people’s work) so I suspect I’m fairly safe with this one since the thief would have to add characters to the image to make it mean something other than what it already means. 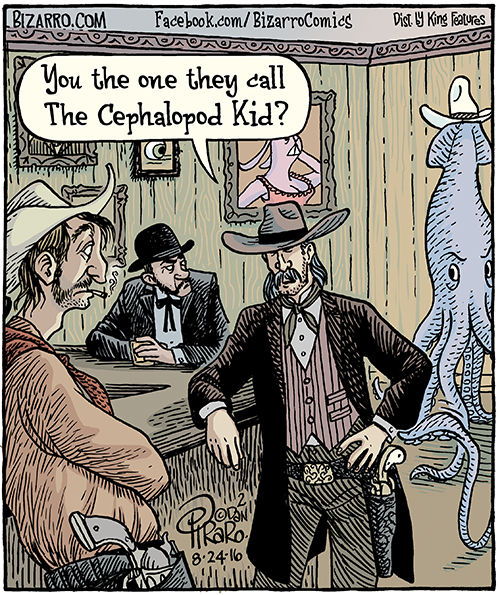 This cowboy cartoon had a different caption when I published it in newspapers worldwide last week. It said, “You the one they call The Amarillo Squid?” As I began to post it here just now, I thought of this new caption and think it’s better, so I changed it. Only folks who read this blog will see this version so I hope that makes you feel special in some small way. 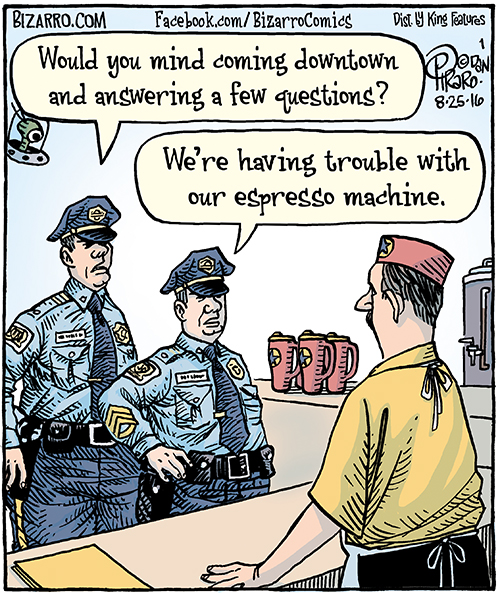 One thing nobody can ever say about me without lying is “Dan Piraro didn’t put enough effort into drawing wrinkly clothing on public servants.”

This cartoon about the pollster elicited another political donnybrook on my Bizarro Facadebook page this week. Polls over many years consistently show that an alarming number of Americans are woefully ignorant of simple facts about our government and current events in the news. They just follow the elephant or the donkey, no matter who’s leading it.  (Not unlike the hordes of people in the UK who voted for “Brexit” then after it passed, googled it to find out what it means.) It’s no wonder that Faux News and Trump can get away with what they do. 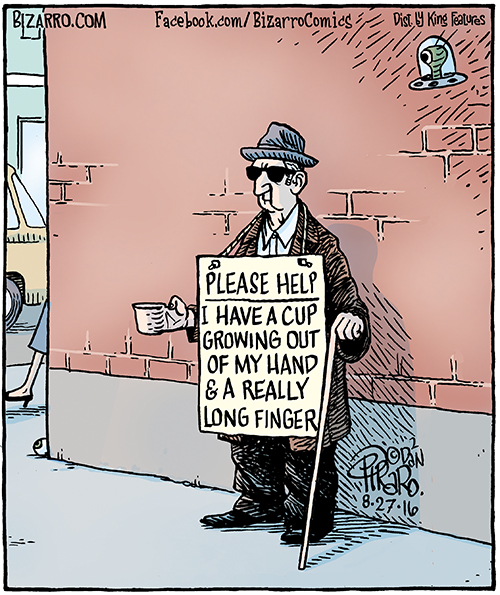 Do you feel sorry for this guy or are you creeped out by him? Or both? If you want to explore the subject more deeply, imagine how he manages various daily tasks with his unusual anatomical challenges.

Bizarro Tip Jar (okay, it’s only a gift to me, but I’ve been entertaining you for years for free so maybe toss a few bucks my way from time to time? Options from $1 to $1million.)

Buy a print of your favorite Bizarro cartoon (Go to Bizarro.com, click on the calendar link below the cartoon image, find a Bizarro cartoon you like, click “Buy Prints” link below. (Options from $30 to $100.) (P.S. I’m hoping to make this function much simpler in the coming year.)

Buy an even nicer, larger, limited-edition, signed-and-numbered, color print of one of my favorite cartoons ($200) or an original ink drawing of one of my Bizarro cartoons ($1000 to $1200) from an LA art gallery. Those things happen here.

Thanks for paying attention, Jazz Pickles. You make life worth posting about!