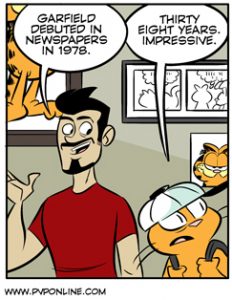 I make an appearance in PVP today with scratch!

My great friend Scott Kurtz and his great crew came to visit me and Jim Davis at the Garfield studio a few weeks ago (my day job) and it inspired a super-fun storyline – come see! And many thanks to my very great friend Scott – you nailed it, buddy!

After being such great friends with Scott for 10 years now, we finally met in person on his recent trip, and it was just fantastic. What a genuine, honest and real guy, every bit as much in person as online (Not to mention meeting Scott’s wife and great team, all of whom are just fantastic human beings and represent an entire vibe of positivity and genuine warmth).

Thank you, Scott, Angela, Cory, Steve, Jenny and Eric. The pleasure was all mine.