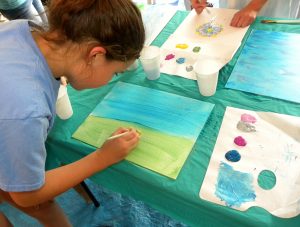 This has been a looong time coming. Almost a year and a half, to be exact. Bet you’re wondering what I’m talking about. Well, let me provide the back story…

Last October, my younger daughter celebrated a Bat Mitzvah. Part of reaching this milestone included performing a charitable service of her choice. She chose to gather a large group of friends and paint small canvases (with cheerful, “outdoorsy” themes) to give to patients at Cleveland’s renowned Rainbow Babies and Children’s Hospital. In addition, each friend also contributed a new stuffed animal to accompany these paintings. The party was a big success.

(above: our daughter, Nikki, painting away last June)

(above: a few results from the party)

In addition, my husband, Mike, suggested we do an adjoining project for the hospital. We would ask professional cartoonists to donate small character sketches that we’d collect together to form a large, collaborative “collage.” This could be hung in the hospital for patients and visitors to enjoy.

I agreed it was a great idea. I put a call out for b/w 5″ x 5″ character sketches, and over the next few months we received a steady stream of contributions. The artwork included a variety of media, from Sharpie drawings, to pencil sketches, to ink washes, to a full-on painting.

The collage mainly features work by professional comic strip and panel cartoonists. I tried to include local cartoonists as well as those whose work appears in the comics section of the Cleveland Plain Dealer newspaper; we thought these would be readily recognizable to local families.

Here is the list of contributing artists, whose work is hung in alphabetical order:

And here is our fantastic result (unframed)! So much thanks goes to all the wonderful creators who contributed. 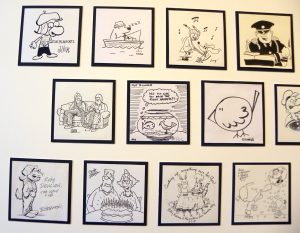 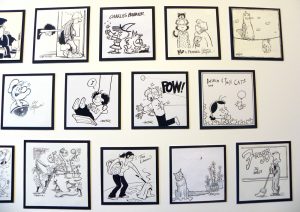 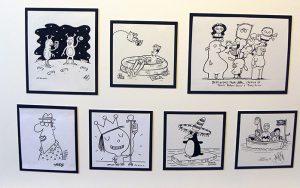 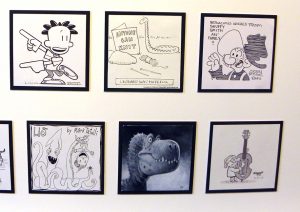 Here is a photo of the final piece, beautifully framed and ready to hang soon in the hospital. [Couldn’t get a straight on image because of the glass]. I can honestly tell you that photos don’t do it justice.

Finally, here is our Nikki, who did us proud on her Bat Mitzvah. Mazel Tov, kiddo. Look what you started. 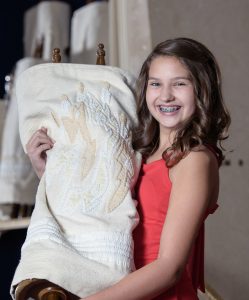