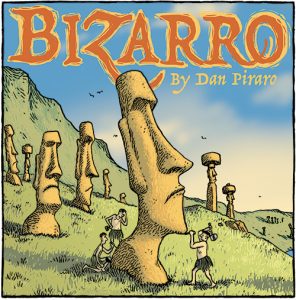 (To create an embiggenated version of any cartoon, click the exact right spot in that cartoon.) 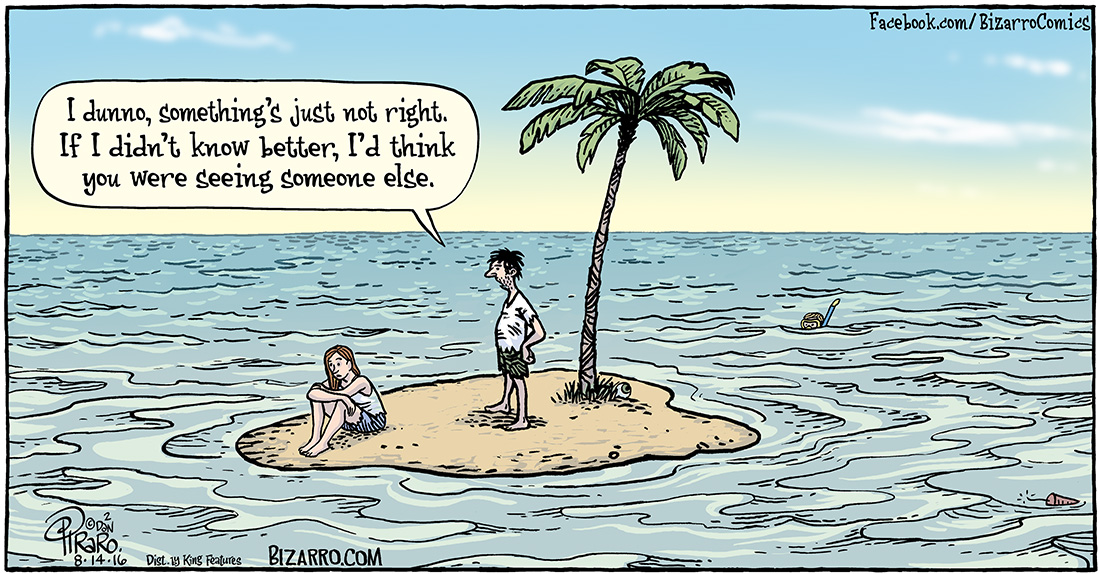 Bizarro is brought to you today by How Have I Lived Without These?

To properly understand the Sunday cartoon above, you may need to enlarge it. (You can do that by placing your cursor over any letter in the balloon that has a right angle, and then clicking.)

Sexual infidelity isn’t inherently funny but this kind of cartoon can be a good way of “whistling past the graveyard,” as the saying goes. Both of my marriages ended with sexual infidelity on my wives’ parts (pun intended) so I know full well how insanely painful it is. But in most cases, “cheating” is merely a symptom of what’s wrong with a relationship or a person’s life, and is not the actual disease. After the sting wears off, it is easier to see that it isn’t the sex but the lying and false promises that do the real damage.

In recent years I’ve become aware of the growing polyamory movement––people who are capable of being sexually intimate and “in love” with more than one person at a time without lying and hurting each other’s feelings. Of course, in these relationships, everybody involved has to be onboard with the fact that nobody is being monogamous. Since human beings are not a naturally monogamous species and are not particularly good at long-term monogamy, it seems a brilliant solution. It certainly alleviates the need for lying to cover one’s misdeeds. I’m not fascinated with it because I want more relationships, but because I wonder if changing my philosophy could protect me from future pain should I be cheated on again. But in the end I could never do it. I’m a person for whom monogamy is deeply important and comforting and I have no choice but to pursue it. But I honestly do not know why. As hard as I’ve thought about it and tried to analyze it, I’ve come up empty.

I long ago gave up any kind of religious belief that monogamy is a higher moral state of being, so that’s not why. I don’t care anything about social standards or what my family might think, so that’s a dead end.  I’d love to be invulnerable to the pain caused by my partner having sex with someone else so I’d give that fear up if I could––but I can’t. No matter how I look at it, I cannot contain the intense jealousy and betrayal I feel when my partner strays. So I’m left wondering if it is a genetic disposition, the way I was raised, or a combination of both. I’m guessing I’ll never know for sure. (I’ve effectively renounced other ideas I was raised with when they no longer served a purpose, but this one won’t budge.)

Happily, my beloved Olive Oyl and I are on the same page regarding sexual fidelity and she regards honesty in relationships as highly as I do, so everything’s swell in that department. 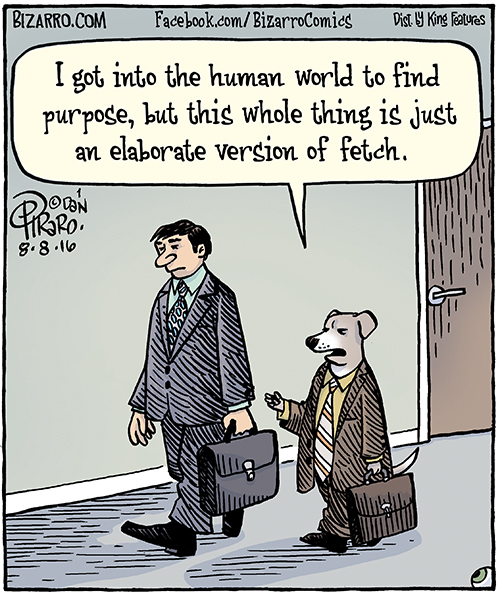 Here’s a cartoon I’m particularly proud of and which got a lot of Interweb play last week. It’s simple, to the point, and has a deep, philosophical theme if you care to plumb it. Few things depress me as much as the enormous percentage of each person’s life that they are required to spend working at a job they hate. In a natural world, we’d be spending all of our time finding food, securing shelter, and trying to stay alive. That’s hard work, but the difference is it means something. It’s what all animals are designed to do, so it feels instinctively gratifying and there is no room for a sense of futility. In modern life, on the other hand, most of us toil 3/4 of our lives behind counters or inside cubicles, slaving away at activities that don’t matter to us.  It is not lost on me how insanely lucky I am that I was able to quit meaningless jobs by the time I was about 36. (For the dozen years before that, I worked full time at a commercial art studio and did Bizarro nights and on weekends. In the years before that, I did a bunch of typical minimum-wage stuff.) I’ve not gotten rich off Bizarro, but it’s kept me out of offices and drive-in windows, and that’s invaluable! 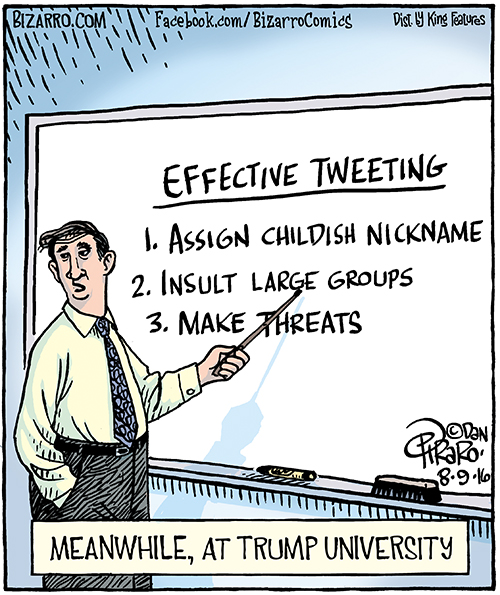 This cartoon got a lot of play in social media, too. Most of it was positive but I got a bit of the requisite “Hillary is worse” kind of comments. I’m not going to get into a political discussion here, though, as I’ve come to see it to be as pointless as arguing over which was the funniest “Golden Girl”.

Here’s one about the heat of summer. I’m not crazy about this cartoon but I am afraid of what lies ahead in the next 30 years regarding global temps. 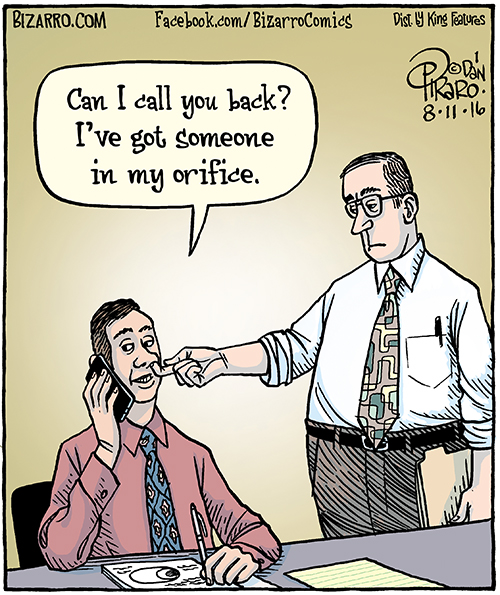 Here’s one I am crazy about because it is so stupid it makes me laugh. This guy has definitely got one of those jobs (and bosses) discussed above. 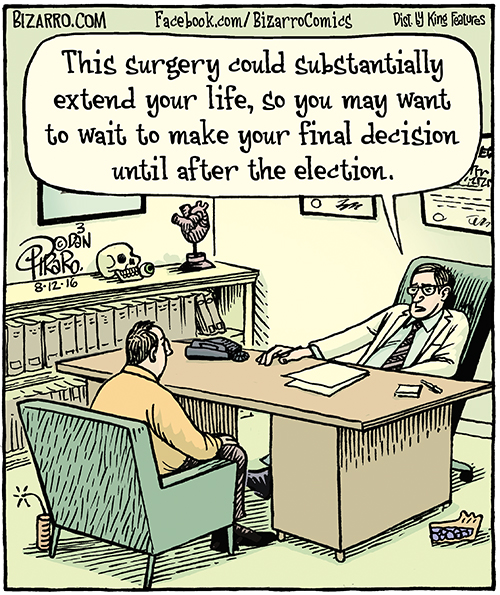 Here’s one that makes me chuckle a bit. It’s clearly about the presidential election but it works for people on either side of the issue. It seems appropriate given that the two major party candidates have never been so despised by voters. 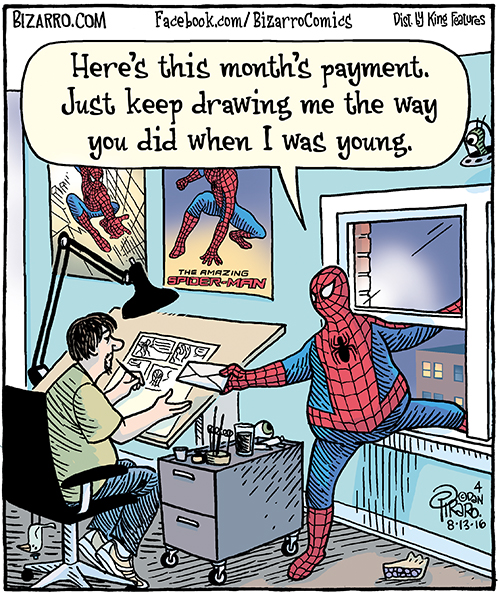 I didn’t know this when I dated and submitted this cartoon, but this week is Spider-man’s 54th anniversary. In fact, Stan Lee used one of my Spider-man cartoons on his Facebook page to announce it! I’m honored.

That’s this week’s cartoon nonsense, Jazz Pickles. Thanks for reading this far and may your week be full of meaningful career opportunities, trustworthy lovers, and super hero costumes that fit as well as they did when you were young!