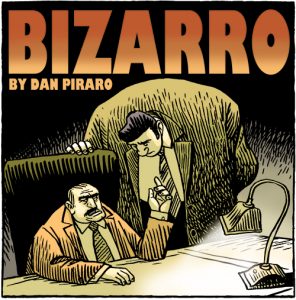 (Make any cartoon embiggenated by clicking an inanimate object in the cartoon.) 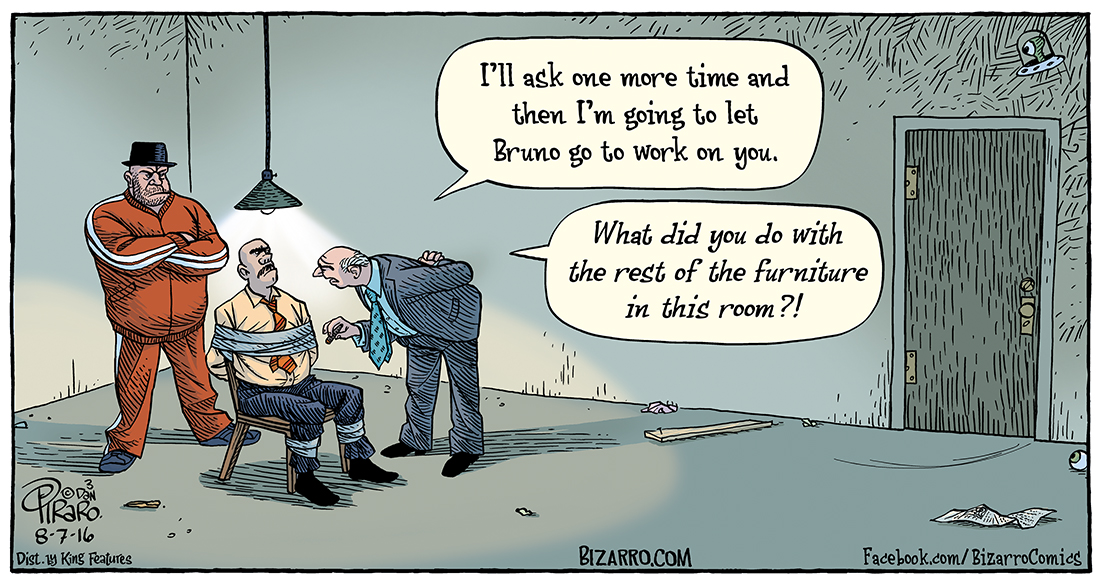 Bizarro is brought to you today by Advice.

Because my father’s family is Sicilian and The Godfather came out when I was in high school, I used to wish that my family had been involved in the Mafia because it seemed exciting and dramatic and an easy way to get ahead in life. But after having watched countless more TV series and movies about the Mob, I’m glad that the Piraros were unaffiliated. People who get involved with organized crime almost never have a happy ending, no matter how powerful they become within the organization. And, since my only tangible skill is art and humor, I have difficulty imagining what role I would play. Considering the kind of angry comments I get from certain cartoons, it would only be a matter of time before I pissed off a Joe Pesci type. Potential headline: “Dan Piraro, Cartoonist for the Mob, Found Dead––’Whose Laughing Now Funny Guy?’ Written Across His Face With an Icepick.” 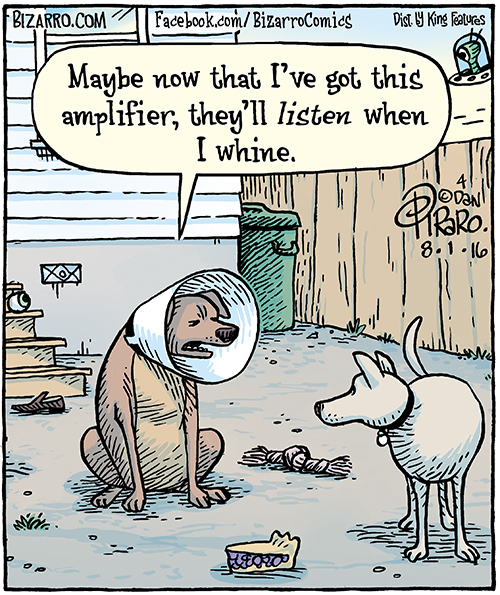 I’ve done jokes about these big medical collar things before. Here’s my favorite one, based on my own actual experience. 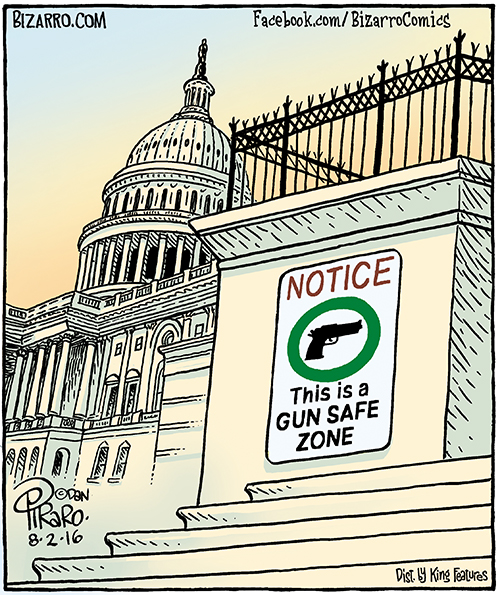 This gun cartoon got a lot of responses on my FB page this week. The comments were mostly pro gun control but there were a lot of the typical “guns don’t kill people, people do” types, as well. I don’t have the answer to the gun problem in the U.S. but this much I know: The American obsession with guns as compared to the rest of the world is insane and has led to an absurd amount of violence both intentional and accidental. No other country has this problem. There are so many guns in the U.S. now that I can’t imagine a time when it will be noticeably better than it is now, but the very least we can and should do is outlaw semi-automatic weapons. We’re not allowed to own anti-aircraft missiles or rocket launchers and that doesn’t seem to offend the NRA’s sense of the constitution (or maybe it does and I’m giving them too much credit), so why can’t we lower that bar to include other military-style weapons? If you’re happy with the current state of legal gun ownership in the U.S. (or wish there were even fewer restrictions than there are now) I’m not talking to you. Your fear has rendered you beyond the reach of reason. Just move on to the next paragraph or skip the commentary and just read the cartoons. 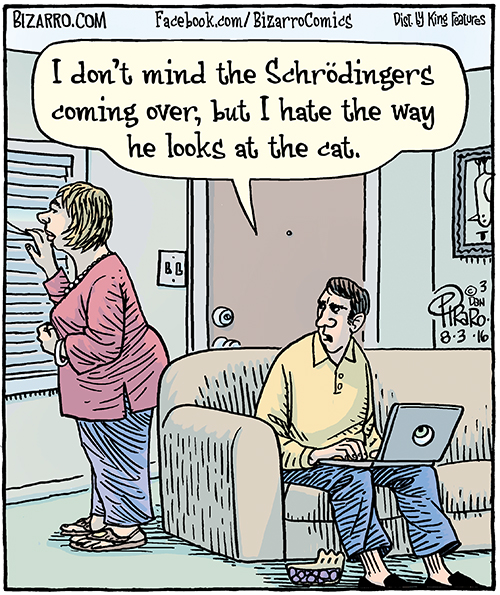 This cartoon has something to do with quantum mechanics, but I’m not smart enough to know what. 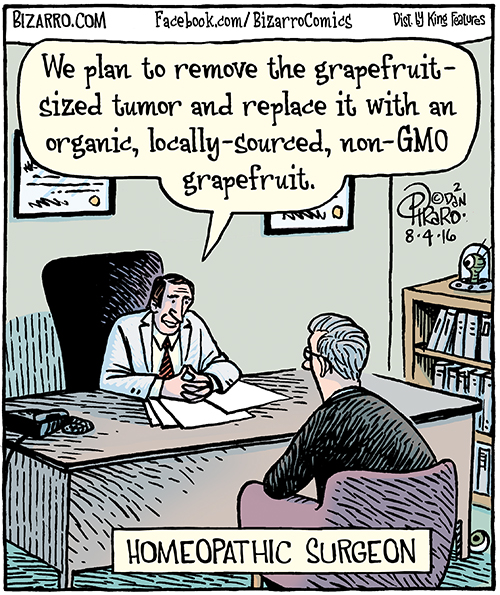 I got a couple of sentences of anger from a homeopathic physician about this cartoon. He wanted to remind me that homeopathic docs do not perform surgery and have nothing to do with organic food. I reminded him that therein lies the humor.  Someone else told me that it would have made more sense if this had been a “naturopath”. Perhaps that’s true, I really don’t know. Even though I live in California and know people who go to all kinds of non-traditional doctors, I’m not entirely sure what the specific differences are. Like the Schrodinger’s cat cartoon above, I’m only smart enough to write a cartoon about it. 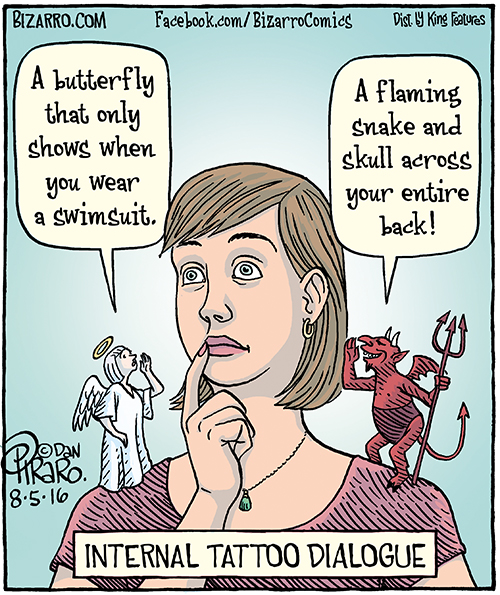 I have a handful of tattoos (though none are on my hands) and I have one that needs to be tattooed over because it represents a terrible person from my past. (Free advice: don’t get a tattoo of anything that represents a romantic partner unless you want to memorialize them because they’re dead.) So my problem is finding a good enough tattoo artist in LA to get the job done. Here’s why that’s a problem: the really talented tattoo artists don’t want to do other people’s designs, especially over the top of a crappy older tattoo. I’m super picky about art so I won’t accept a tattoo from the vast majority of tattoo artists because their hand skills aren’t up to my standards. There are so many tattoo artists in LA that going through them all to find someone whose skills are up to par but aren’t yet too famous to work on this for me is a major research project that I don’t really have time for. So the crappy tattoo lingers on year after year. I know; first-world problems. (Recommendations are welcome, by the way.) 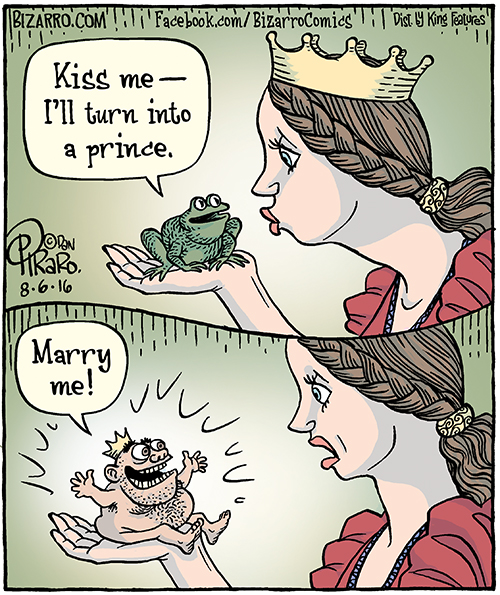 Finally this week, a grotesque twist on the Frog Prince fairytale. How many of you ladies thought you were marrying a prince be he turned out to be a disgusting disappointment? Yes, this can happen to men, too, and everyone in between. And some of us are stuck with foolish tattoos to remind us of our poor choices.

If you’re enjoying my comics but not subscribing to a newspaper, you’re getting all of this wit and wisdom for free. Accordingly, it gets harder each year to make a living as a cartoonist. So please consult your higher self and ask if you should make a one-time donation or a small monthly contribution to my efforts by clicking the Tip Jar and feeding the bunny!

Another great way to support me is to buy one of these super awesome, limited edition, signed and numbered, framed prints from an LA art gallery. These guys also sell some original art from Bizarro. OMG, what a great gift these would make!

Thanks, Jazz Pickles! Olive Oyl and I love you all and appreciate your support!