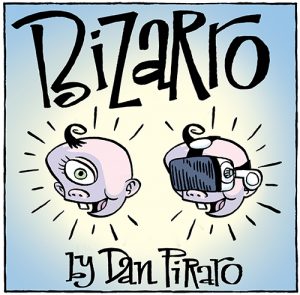 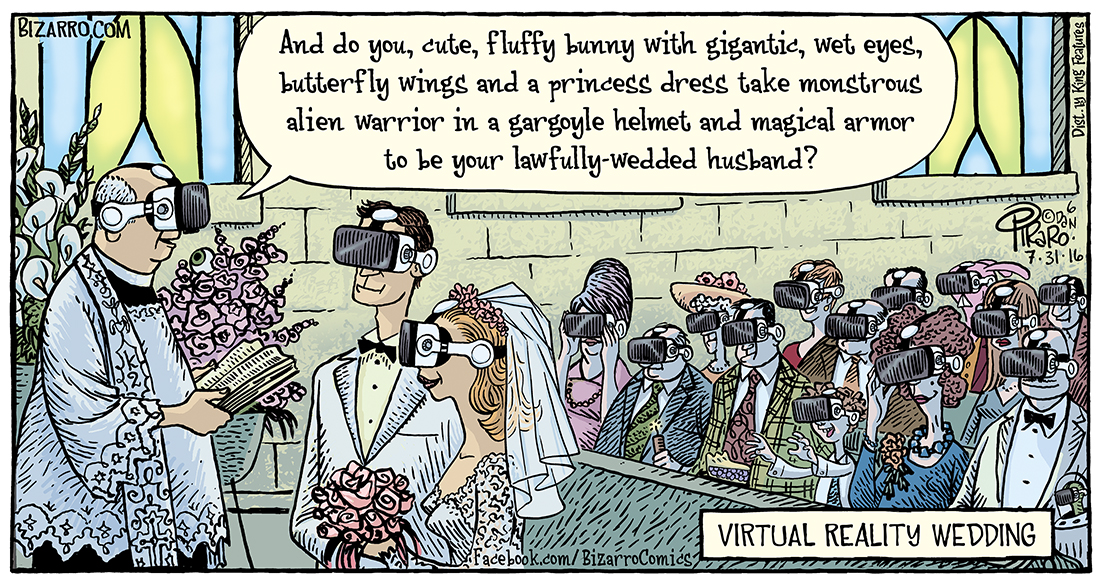 Bizarro is brought to you today by The Controllers of Medicine.

I recently tried one of those virtual reality (VR) goggle devices that the inventors have come up with and it was––as advertised––almost like reality. And reality, as those of you who have suffered through the mind-numbing dullness of everyday life for as long as I have know, is highly overrated. But now, for the price of a handful of hallucinogens, you can strap a cell phone onto your face and watch any number of animations and videos that will make you believe (not really) that you are in a world other than where you actually are, if you believe the traditional narrative about “reality” in the first place.

I found the experience only mildly interesting, but it did give me the idea for this cartoon. I don’t know if a live-action VR event like the one above is yet possible but if not, it will be soon and people will have VR weddings and when the audience looks at the celebrants they’ll see an awesome warrior and a bunny princess being married by a bullfrog in a space suit or something. I’m looking forward to it being an improvement on traditional weddings, during which I always have to fight not to audibly scoff when the bride and groom promise to remain sexually faithful and in deep love with each other for the rest of their lives. Especially if they are under forty years old. But, as the saying goes, your first couple of marriages are the ones with the greatest learning opportunities. 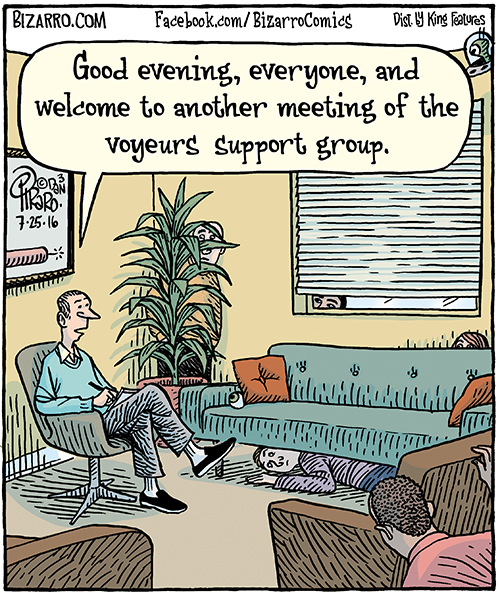 Now here’s a group that could benefit immensely from virtual reality goggles: voyeurs. Entire programs could be based on the peeping Tom concept and people could indulge in their hobby without infringing on the privacy of real people (again, assuming you believe in reality) or risking arrest. I’ve just been told this is already being done. Of course it is. 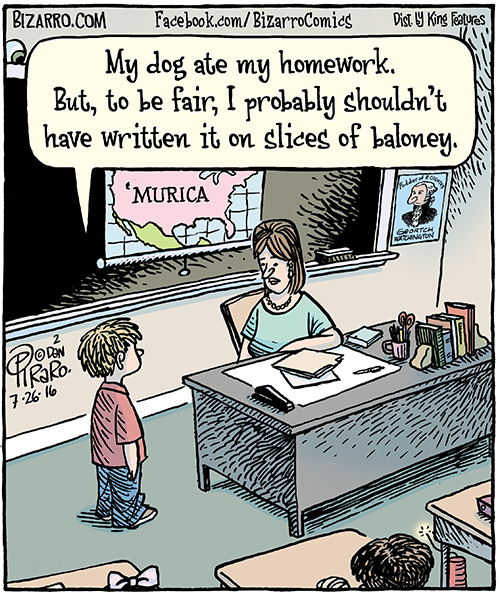 One of my buddies who makes up half of the cartooning team known as Mustard and Boloney asked me why I spelled the lunchmeat in question the way I did. The answer is that I don’t know. I might have been having a mental episode of some kind. And why my editor didn’t change it is another point of puzzlement. These are the kinds of events that make me question reality in the first place.

The popular pink meat-like goo is named for the town of Bologna, Italy, (pronounced buh-lone-ya) but Americans had trouble not pronouncing the “G” like an American, so it morphed into buh-lone-ee and eventually lunchmeat companies changed the spelling to match the pronunciation. Presumably. I didn’t look this up, I’m just guessing, but I’ve found that if you do that with enough sincerity, people will believe you. (See Donald Trump’s presidential campaign.) So, since it’s a recently made-up word, there seems to be an anything-goes attitude toward the spelling. You can find it on the Interwebs spelled a number of different ways, including “poloney”. What?! Yes. I know. It’s like “busketti” being an accepted spelling of “spaghetti,” just because three-year-olds sometimes pronounce it that way. 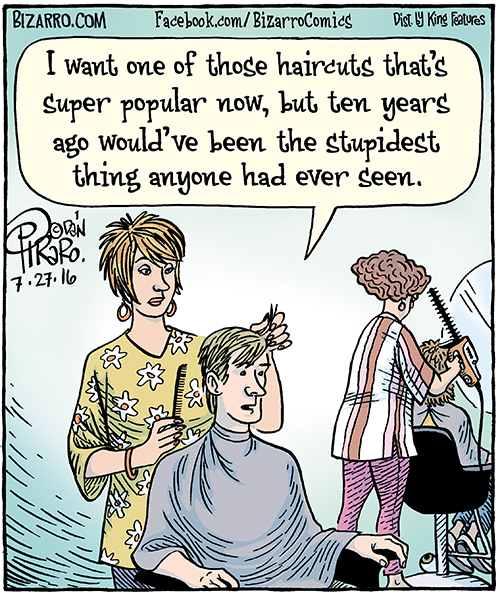 I mean, it’s fine. Definitely not the stupidest hairstyle in human history (because this one is) but it just looks too much like a napping mammal for my taste.

I love the simplicity of this UFO cartoon. This is a fully-realized version of my trademark Bizarro alien, the one who hides in the backgrounds and corners of many of my cartoons as one of my Secret Symbols. But that isn’t really his usual spaceship. 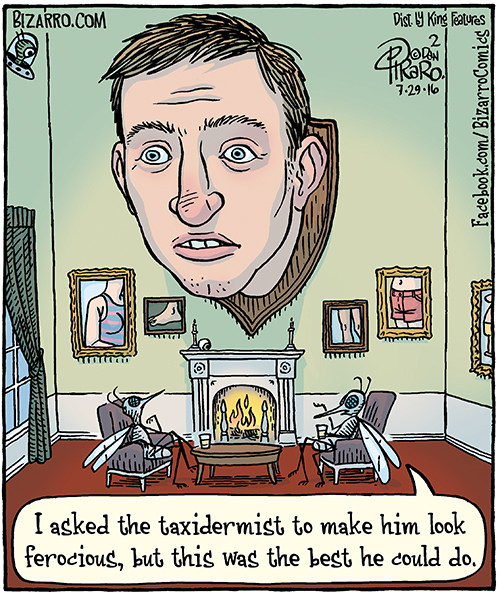 My favorite thing about this cartoon is the relative size of the trophy head to the mosquito’s den. Of course, those of you with more highly developed senses of spatial relationships will notice the scale is not accurate; the mosquitoes are too large in comparison to the human head. But this is what we call artistic license. Note also that the pictures on the walls are various human body parts that mosquitoes find delicious.

Since I started this blog post with a discussion of what “reality” is, let’s bookend it with this cartoon. Can a human being know things about a non-human animal (or another human) that they have not been told?  Psychics (pet and otherwise) and their customers (the human ones) believe they can. I am unconvinced. Which reality do you live in?

Thanks for reading this far, Jazz Pickles. If you enjoy my cartoons and commentary, please pass this link on to other smart people with a friendly recommendation. And please consider making a one-time donation or monthly contribution to my cartooning efforts since most people these days enjoy my hard work for free on the Internet. You’re the best!