Ask the Archivist: MAZIE THE MODEL

Today’s subject is a forgotten flapper strip of the 1920s that never made much of its short life, but may be of interest if you enjoy new old comics.

With the overnight success of the Chicago Tribune’s sister publication, The New York Daily News, (created in 1919), tabloid newspapers with lots of pictures and sensational headlines started popping up everywhere.  Magazine publisher Bernarr MacFadden produced  the over-the-top New York Evening Graphic starting in 1924.  Hearst added a photocentric tabloid extra edition of the New York American before the New York Mirror was launched, also in 1924. Many tabs were short-lived, among them the Philadelphia Sun, Tampa Globe, Detroit Mirror and the Merrimack Valley Sun. However, these papers all needed strips, and Hearst would be up to the task. MacFadden launched his own “M.P. syndicate” (for MacFadden Publications). We, of course, had King Features as well as secondary outlets like Premier Syndicate.

In building a roster of second-tier, daily-only strips designed for tabs and other (literally and figuratively) smaller papers, the Hearst corporation fielded several new titles, many debuting in the Mirror. Among them was Mazie The Model.

The strip was created by Larry Whittington (1903-42), whose specialty was girl gag strips, starting with Fritzi Ritz in 1922 at the New York World (Press Publishing.Co.). Fritzi was a glamorous type of working girl. Where Tillie the Toiler, Somebody’s Stenog and Winnie Winkle were office bound, Fritzi became a movie star. The strip lasted many years, with Fritzi eventually acquiring a niece name Nancy whose popularity outgrew her aunt’s, which led to her own title that exists to this day. But that all happened after Whittington left the strip in the hands of up-and-coming talent, Ernie Bushmiller, when he went over to King Features in 1925.

Mazie was a lookalike to Fritzi, another beautiful girl with an exciting, high profile job. She worked for Mr. Ginsberg, a fashion designer and dress shop entrepreneur. Her themes were mostly about demanding customers, pushy salesmen, and relations with other shop employees. She did get to wear beautiful gowns and meet lots of handsome fellows.

The strip lasted only until April, 1928, in the middle of a continuity. It would seem that the strip might have been abruptly cancelled, but I note that it was being resold as reruns in 1929-30, and it appears to me it was in more papers than in its first go-round.

According to an obituary for Whittington, (he was run down by a car in 1942), his right arm had been injured in another auto altercation “12 years ago,” which temporarily stopped his cartooning career. My guess is that the first accident occurred not in 1930, but in 1928, putting a halt to producing Mazie.

Whittington recovered, doing book illustrating and another girl strip from 1936-8, “Daisy Daily and Dotty Dawn,” which was put out by the lowly General Features Syndicate. 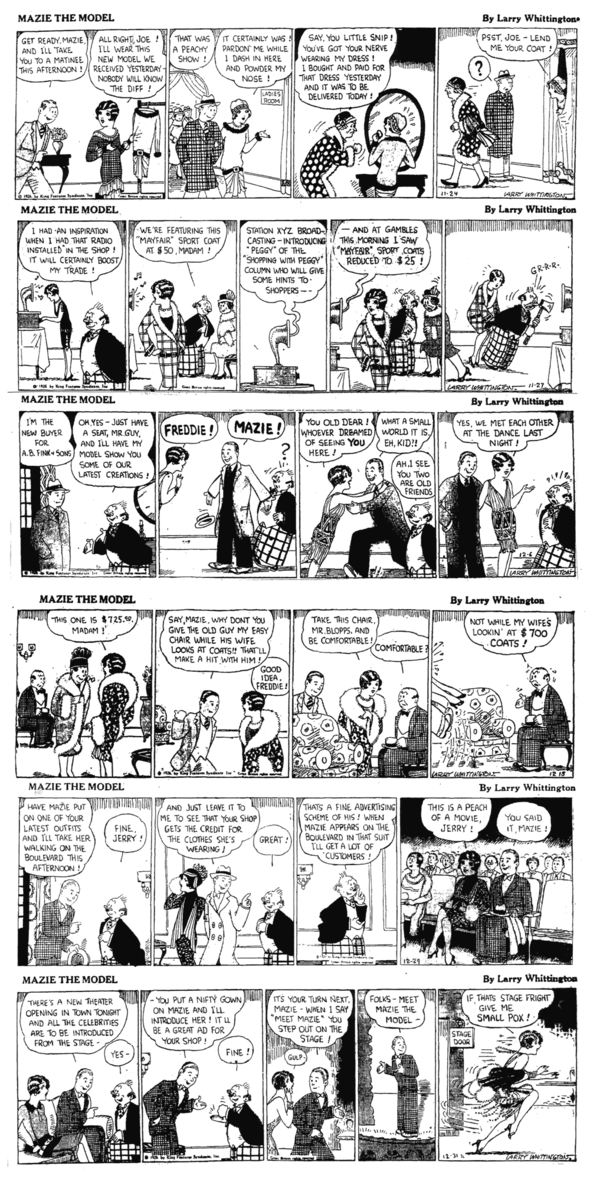 Now, last but certainly not least, our Mail Bag for this week.

Did Messmer actually invent Felix?  I see it this way: Though Sullivan was a repulsive human being, he really did have some talent, and had at least something to do with the cartoons he was producing, right? You can see the art style of Sullivan, a sort of stiff and plodding affair, in the early productions of his studio, right into the early 1920’s. About 1922-23, the style becomes totally different, that is, Messmer’s fanciful renditions of round and rubbery characters, and the bizarre landscapes beyond. That the comic strip and the animated shorts both change at the same time indicates to me the point where Sullivan’s active participation has ended. The stories themselves change also. The Felixes from 1919-1922 are most all about using his wits to fight off starvation and homelessness. When Messmer takes charge, that’s when the memorable storybook and science fiction fantasies start.

One thing about Messmer is, remember, that he outlived most of his contemporaries, and for that matter, most of the original documentation. He liked to give the impression he was amazingly meek and just let Sullivan and whoever else take advantage of him, though he was running the studio. I recall seeing him on an episode of an arts-themed news-feature series “Camera Three,” from 1973 or thereabouts. They interviewed him and, although (as I recall) he was coy about it, the producers postulated that he was the actual Felix creator. But even then, it seemed to me they were trying to make it a story about injustice for a man who was robbed of his proper due to make it more compelling than just about cartoon production. Well, that Messmer for many years worked on the comic strip, which outlived the film Felix, and he even used Felix in some of his renowned animated advertising signs in Times Square, maybe people assumed he created the cat, with Sullivan and his studio being long gone. But just exactly when did he, or anyone else, actually come right out and say yes, it was his idea from the start?  In Camera Three, he seemed rather obviously letting others describe the event. In the 1949 official King Features Biography of Messmer, it reports:

“Back in this country, (after serving in WWI) Otto went with the
Pat Sullivan Studios, who were exploring the animated cartoon field
and it was there that the mischievous Felix was created, first as a
movie feature and later as a comic strip.”

So I gather that though he was the Felix man in 1949, he was not (or not yet) taking credit for being his Daddy.  I give him all the credit in the world for making Felix the multi-media superstar, but the vagueness seen attached to the creation claim makes it seem shaky to me.

Sorry, gang, we did not save a file of Felix. There may be one reason or another for this, given that Felix’s legal status changed from time to time, but if you could see me right now, I’m holding up empty hands.

How could there be an extinct Cat species when they all have nine lives?

Mssrs. Bryan and Wendling are also responsible for the tune “Humoreskimo,” mentioned as well.

Times change. Very little of the fun stuff we had in our childhoods hold any attraction for kids today. Comic books can’t take the place of Facebook.

You have a good memory . Somehow, we never had a lot of clients for the Betty Boop and Felix strip. It only lasted from 1984 to 1988. Felix left the series in 1987, and it was rechristened Betty Boop and Friends. Maybe I’ll do a page on it coming up.