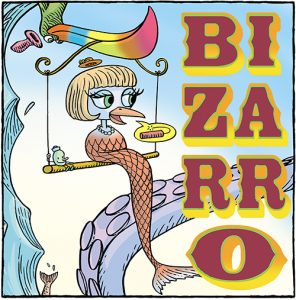 (To embiggenate any cartoon, click it with your embiggenation tool.) 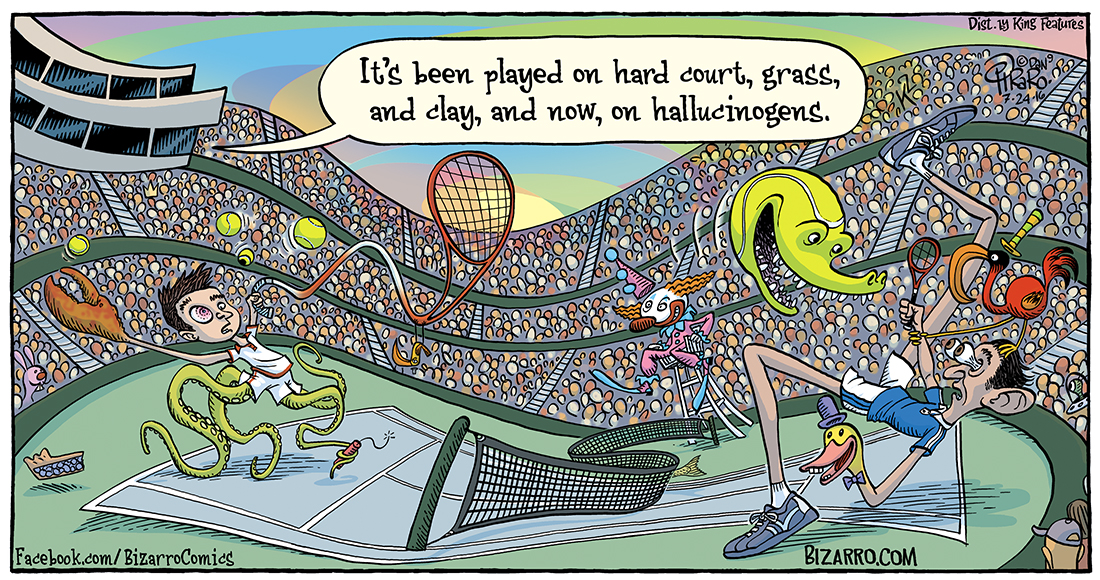 Bizarro is brought to you today by Hallucinations.

It’s been a shitstorm of a week here at Rancho Bizarro. I published a cartoon on Friday that a lot of people misconstrued so I posted an explanation and apology on my FB page, and that led to hundreds of comments and arguments. More on that later in this post.

The drawing itself is mildly reminiscent of the illustrations I did for my coloring book for grown-ups, which comes out this October. (You can pre-order it here, as a matter of fact. I guarantee you’ll not find a book at this price that has as much elaborate art to get lost in, so buy a dozen! In fact, this book is as close as you can get to a drug trip without actually taking any drugs, though the publisher opted against using that line in their publicity efforts.  Here’s one of the simpler images.) 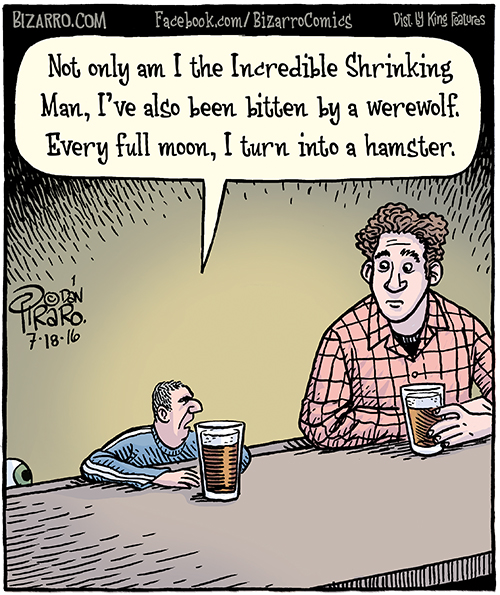 Monday’s cartoon was based on an experience I had in Europe when I was 20 years old. As it turns out I had not been bitten by a werehamster, I had unwittingly eaten a magic mushroom purchased by a friend legally and over-the-counter in Amsterdam. I did not attempt to play tennis. 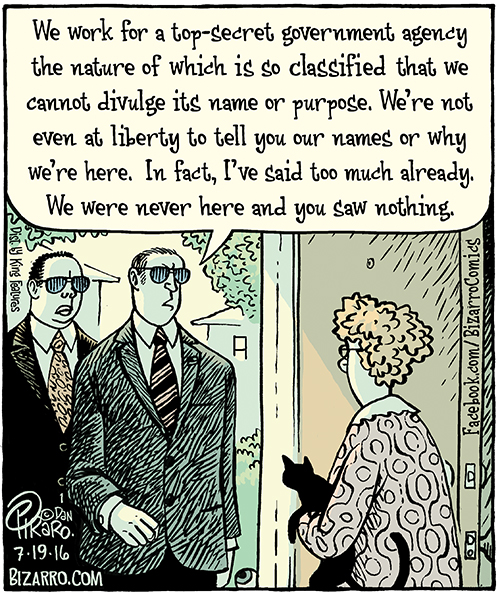 Human society has become such a ludicrous, complicated mess in the past 10,000 years that I’m sure things like the scene above happen all the time. 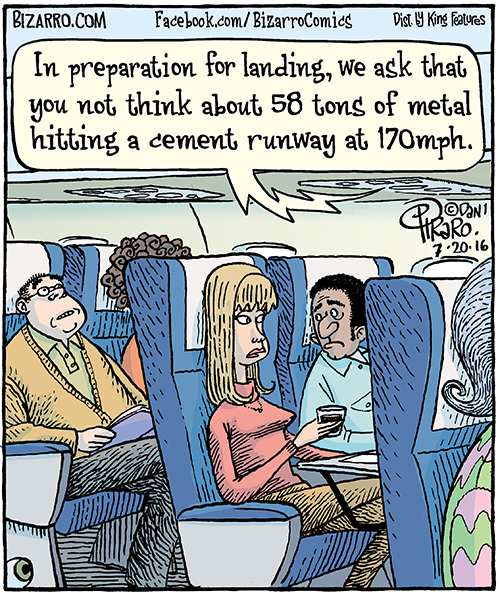 Thinking too much is something we humans do extremely well. Fear is like a heavy black sack over your head; it blinds you to common sense. Common sense would tell you that millions of people have flown all over the world every single day for many decades and only a very small percentage have died from it, so it must be safe. But it might also seem like common sense to be afraid of 58 tons of metal hitting the ground at 170 miles an hour. Here’s where you have to decide to vote with your intellect or with your emotions.

This is also how terrorism works. What terrorists want is for the rest of us to be afraid and make bad choices. It might seem like common sense to stop Muslims from immigrating to your country, to round them up, interrogate them, keep them under close watch or even deport them. But the vast majority of victims of terrorist attacks are Muslims, and the vast majority of Muslims are like you and me and don’t want any trouble. Terrorists know that when foreign governments persecute Muslims, or even just make them feel very unwelcome, it breeds more terrorists. Maybe only one or two in 100,000, will snap under pressure and join the cause, but that’s all they need to keep the cycle of fear and persecution going, which breeds more terrorists. 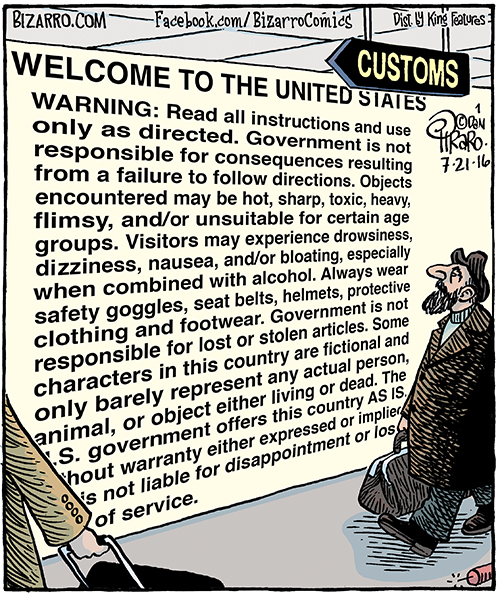 Speaking of immigrants, I thought a sign like this might be helpful at customs. Or, perhaps it should more correctly say “Anything bad that happens to you in this country, even if you were acting like an idiot and it was completely your fault, could result in a big payday if you get the right attorney.” 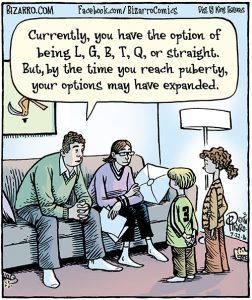 That brings us to this cartoon, which caused so much trouble last week. Many people thought that I was insinuating that sexual orientation is a choice, which is an argument that many bigots use to criticize non-heterosexuals for religious reasons. (They insist homosexuality is a sin and something has to be a “choice” to be a sin. You couldn’t call being freckled a sin, because you were born that way and had no choice.) This upsets me for a couple of reasons. 1) I do not believe sexual orientation is a choice and I am loathe to be mistaken for this kind of bigot, and 2) millions of non-heterosexual teens live in misery (and some even commit suicide) over the negative social pressure they endure for not being “normal,” and I do not want to add to their troubles.

The fault is mine, of course; I should have worded this cartoon differently to make my point more clear. Accordingly, I’ve changed the wording and posted the new one below so if you want to forward it or post it on FB or whatever, please use that one. 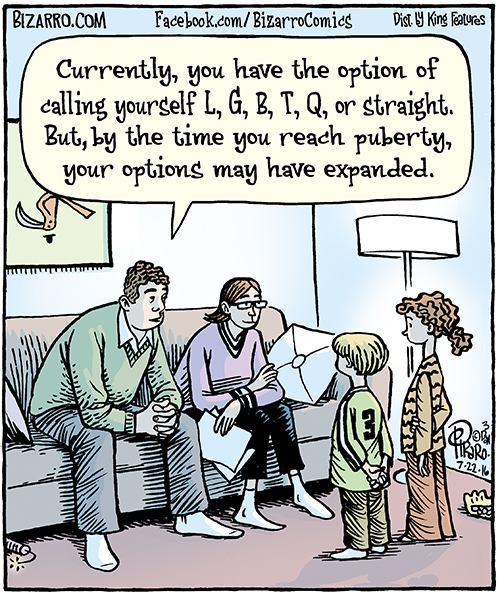 When I explained and apologized on my FB page last Friday, I got a lot of support from people, but mostly in the form of “F— ’em if they can’t take a joke” and “No apology necessary––if people don’t get it, screw ’em”. I understand that sentiment and agree, and I don’t usually apologize to people who are simply too thin-skinned to play with the big kids. But when vulnerable people like adolescents are involved, I prefer to err on the side of safety.

Others (from the right and the left) said that it is ridiculous that we have to label our sexual orientation in the first place and that it’s nobody’s business. I agree with that, too, but America isn’t there yet. After centuries of persecution for being different, people are hungry for the opportunity to stand up and say “I’m not a pervert or a freak and you’re a bigot for labeling me as such”. To do that, you’ve got to develop pride in who you are specifically and be able to talk about it publicly. The growing list of initials is a shorthand for that. I’m not immune to the ridiculous side of this growing list, however, and that’s what this cartoon was about in the first place. In fact, I’m told the list has already grown since I wrote this cartoon four weeks ago. (To my conservative readers who say that I only poke fun at the right wing, here’s an example of me laughing at my own side.) 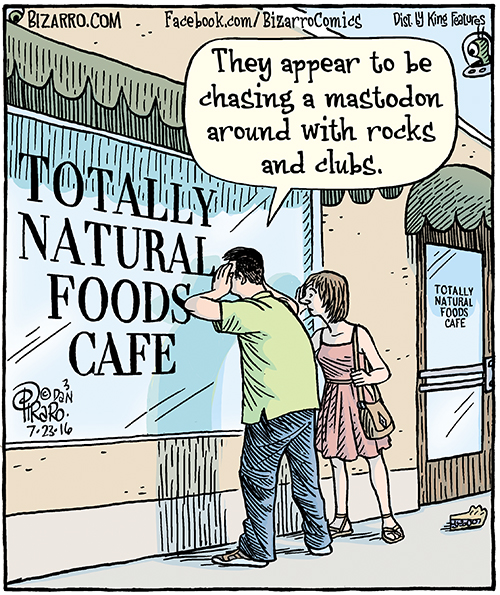 My last cartoon for the week is about another favorite subject of mine, anthropology. I’ve been reading some E. O. Wilson lately so my mind has been in the distant past.

If you’re looking for a super gift for that someone special or your own special self, please consider a beautiful, archival, limited-edition, signed and numbered, fine art print of one of my favorite Bizarro cartoons. OR an original drawing from a published Bizarro comic. Both can be found at this online art gallery.  (The color ones are prints, the b/w ones are original ink drawings.) It’s a great way to support me and a damn fine way to spruce up your trailer down by the river!

Another great way to support me is to drop a few monetary units into MY TIP JAR. Whether it’s a one-time donation or a small monthly contribution, it will help Olive Oyl and me continue to live indoors, which we have come to prefer!