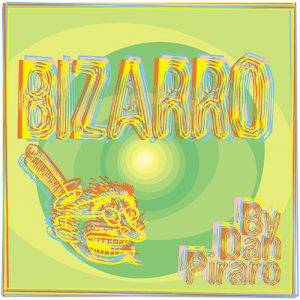 (If you seek to embiggenate this cartoon, click any athletic garment.) 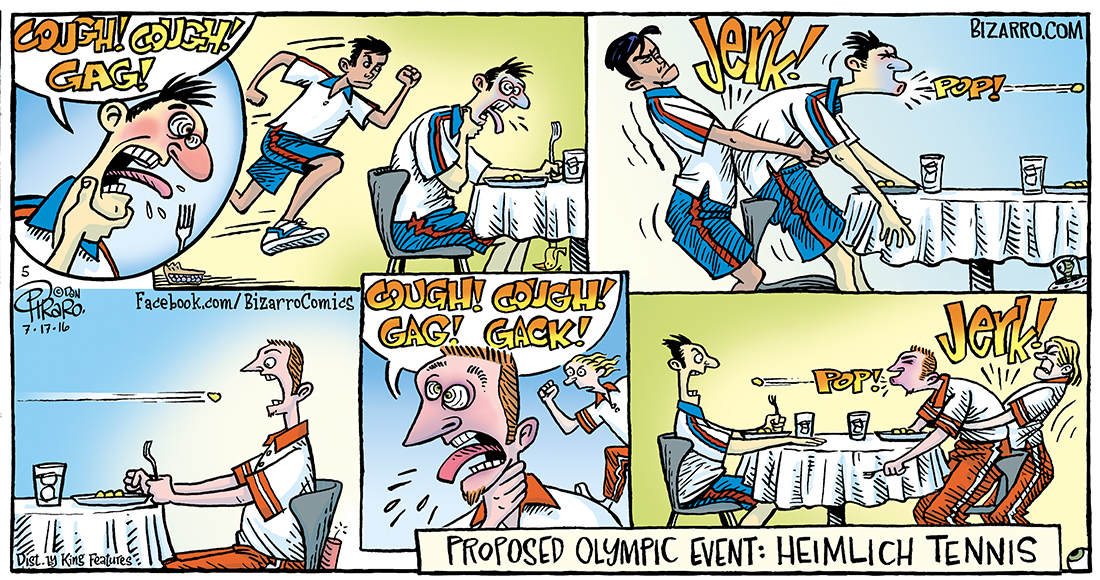 Bizarro is brought to you today by The Tiny Twins.

I often marvel at the sort of sports that get into the Olympics and the ones that don’t. I’m kind of a purist when it comes to the Olympics in that I prefer the old-fashioned, individual endeavors like track and field events over modern team sports like basketball. I can’t get behind things like golf in the Olympics at all. I don’t think golf is as much a sport as it is a game. If golf is in, how long before darts, horseshoes, and poker? Nonetheless, I think Heimlich tennis would be worth watching.

I’m going to move on to the week’s cartoons just as I usually do, but first, I’d like to present A SPECIAL STORY ABOUT ONE OF MY CARTOONS THIS WEEK.

In my first year of cartooning, 1985, I wrote the following gag and drew it in the hideous and amateurish style you see below. (Like many artists, I am very critical of my early work, but that’s beside the point.) I wrote the gag and made up the name because I thought it sounded like it might be the name of an award. 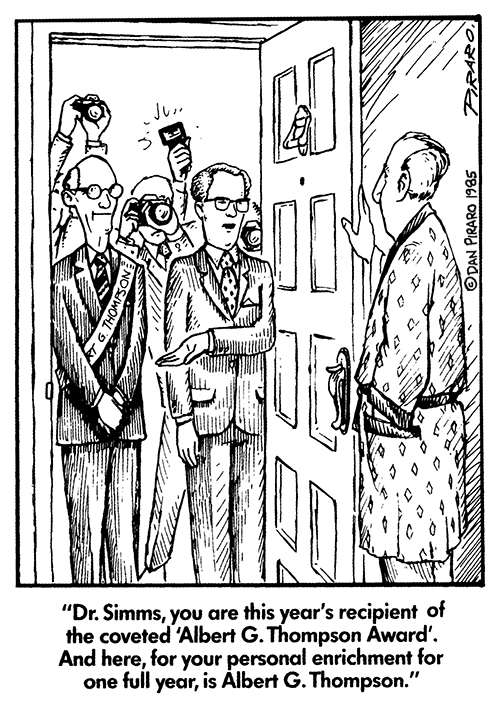 Not long after it published, I got a letter in the mail from an Albert G. Thompson who wondered if I might have been one of his former students. Mr. Thompson had been a teacher for many years, looked very much like the man in the cartoon, and had worked under a department head named Simms or Simpson. I can’t remember exactly which now. I convinced Mr. Thompson that the similarities were remarkable but entirely coincidental, and we both had a good laugh over it.

We exchanged a few letters back and forth and I could tell from these that he was smart and funny and a bit eccentric––in short; my kind of person––so I sent him the original art from the panel in thanks for letting me unwittingly borrow his name.

Flashing forward almost ten years to the mid-90s, I got an email from Albert’s adult son, Chris Thompson, who told me that his parents had since retired to a small coffee farm in the mountainous rural area outside of Antigua, Guatemala. They enjoyed a quiet but busy life creating small artisanal bags of coffee, selling them to shops in town, shipping them back to the U.S., and giving tours to tourists. A part of his tour was to show them my cartoon art which he had framed and hanging on the wall of the small building where he roasted the coffee. Chris told me that during a recent visit with his parents, he’d asked his father if he’d ever thought of contacting me and inviting me to visit. He said he had but thought it unlikely I would come. So Chris offered to email me and extend their invitation, and his father agreed.

I was excited by their offer and, after researching the situation enough to convince myself they were not going to lure me into the mountains and rob me, I decided to go. Sensing that this could be a grand adventure worth sharing, I took my two daughters, ages 10 and 15, with me. The week we spent there and my subsequent years of friendship with Albert and his wife, Carolyn, are among the best things that have come of my cartoon career.

“Doc,” which is what his friends and family have always called him, was a truly inspiring man who dedicated his life to getting the most out of every moment in life and sharing it with anyone who would listen. He spent his professional career teaching––mostly in the U.S. but also a lot in Central America with his wife and five children in tow––and after his retirement in Guatemala, continued to learn and teach and experience new things until he could no longer physically manage it. He and Carolyn became a valuable and cherished part of the rural community in which they lived, sent many Guatemalan girls to college, employed the local teens, and generally became a cherished part of their community and were considered family by many of the locals.

I visited them four times in the subsequent years and Doc and I spent countless hours making each other think and laugh. He painted, was a silversmith, became a coffee farmer, and, together with Carolyn, designed their home and hired local people to build it. He also became something of an expert on local plants and created a veritable Garden of Eden out of their property. The numerous orchids on their property were the envy of many.

Doc died in his sleep on May 29th of this year. He was one of the most interesting and inspiring people I’ve ever known and I have vowed many times to be more like him. I deeply regret not having visited them more often. As a tribute to him and his wonderful family, I’ve redrawn the original cartoon that brought us together, as you can see below. This version looks even more like Doc, but I still could not capture the look of wonder at life and the universe that he often exhibited when he wasn’t mugging for a camera to make his grandkids laugh. He was a brilliant and ridiculous man who changed my life in profound ways and whom I loved dearly. Here’s a fairly recent photo of Doc and Carolyn and their son, Chris, who was instrumental in our meeting.

(Note: Using this post and several other references, a reader has built a Wikipedia page for Doc. I think that’s wonderful.) 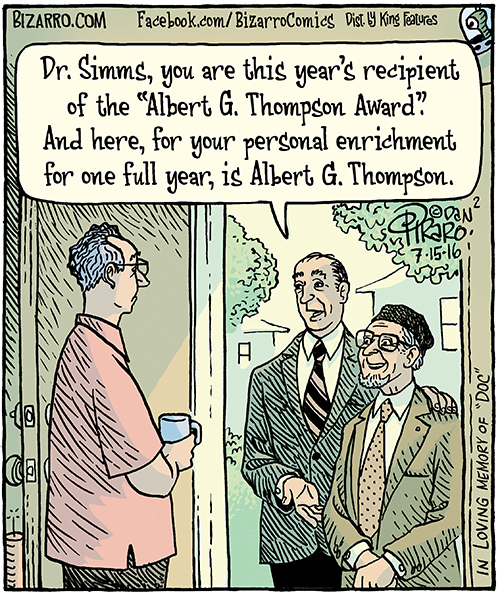 And now, back to the rest of the cartoons from this week. 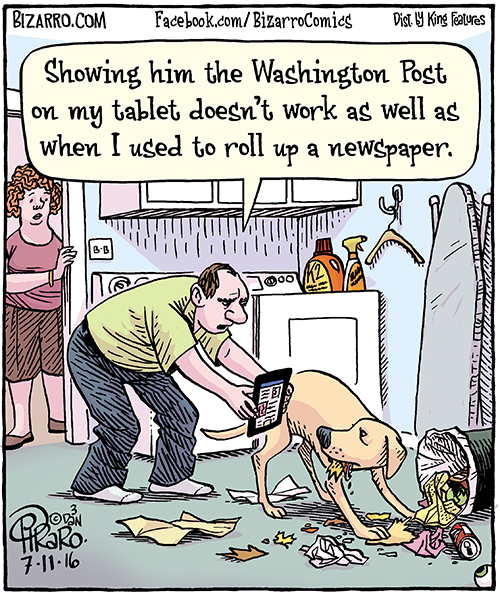 For a few years I was reading on Kindles and those kinds of electronic doo-dads, but then recently I switched back to reading on printed pages and find that I like it SO much more. Thinking about that reminded me of yet another advantage of an actual newspaper over computers and tablets: if you smack a dog lightly once or twice on the butt with a rolled-up newspaper, you never have to hit them again. Just the sight of you rolling a newspaper will put them back on the straight and narrow. 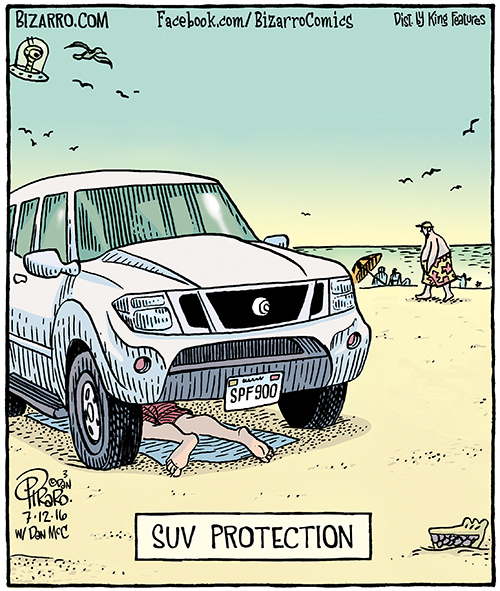 A buddy of mine and cartoonist colleague, Dan McConnell, wrote the above gag for me a long time ago and I forgot to use it. Found it recently and decided to throw it into this week’s mix for summer. 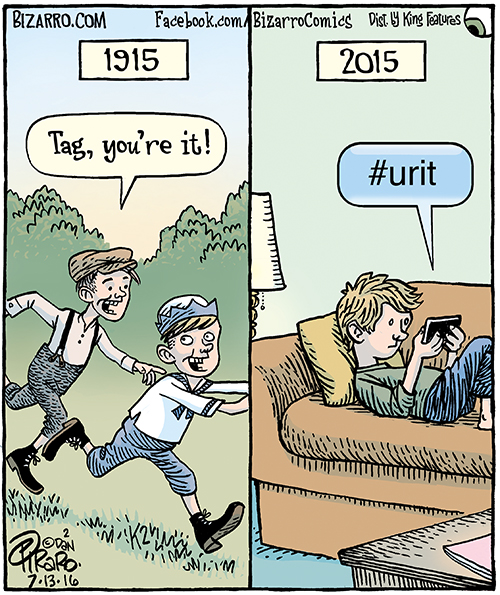 “Tag, you’re it,” versus “hashtag, you’re it.” I know this makes me an old geezer but I don’t care: I think living any substantial part of your life inside of an electronic screen is a recipe for depression. Get outside. Meet humans and other animals. Touch trees. Marvel at mountains. Be chased by a large carnivore. There’s so much more to life than technology. 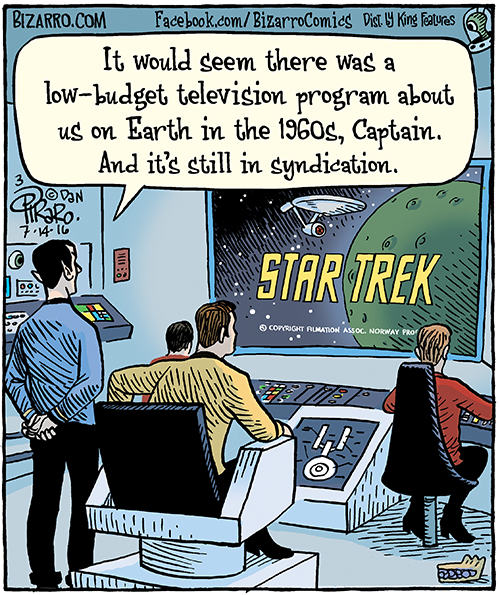 I was hooked on Star Trek the first time around in the 60s and in syndication in the 70s. In researching the image for the screen these characters are looking at, I found the picture this one was drawn from, thinking it was from the original 60s TV show. But a reader told me that the copyright line at the bottom shows it was from some later incarnation, an animated version made in Norway in the 70s. I think that’s what he was saying, anyway. Any trekkies out there know the answer to this? 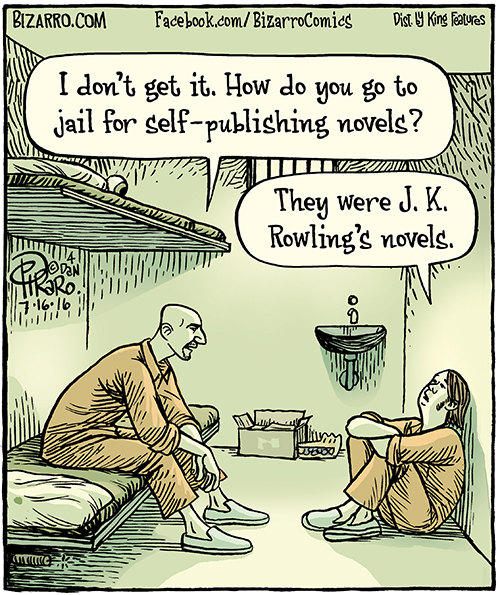 I hear about tons of people who are self publishing novels these days and it gave birth to this cartoon about a small corner of the crime world.

Thanks for your eyeball attention, Jazz Pickles. You guys are great and without you, I’d have much less motivation to write and draw comics.