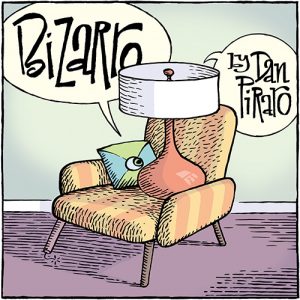 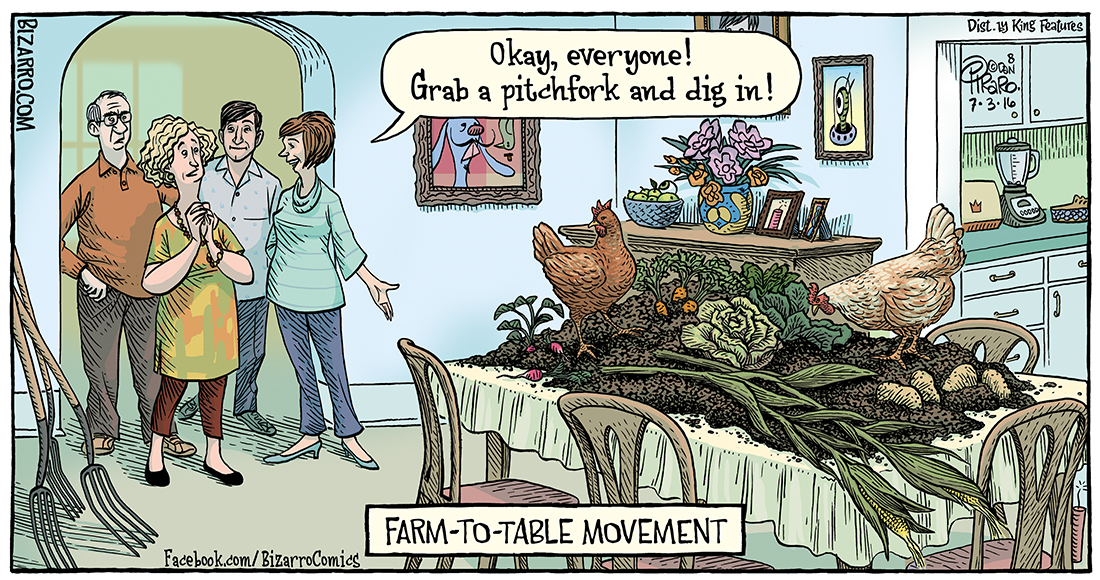 Bizarro is brought to you today by Staying Cool.

The “farm to table” movement is one that big city hipsters have been concerned about in recent years; I have no idea how it’s playing in small towns or rural areas. You can read the definition of it here.  I think it’s a good thing because it favors local growers and small farms and businesses who care more about their process and products than do the practitioners of the industrial food complex that America has built since WWII. The industrial way of growing plants and animals for food has been a nightmare for human health, the environment, and the treatment of animals. Michael Pollan has had a lot of important things to say about our food system in recent years, in my opinion. So all I did here was take it to an absurd extreme, which gave me a chance to draw some realistic crops and chickens on a dining room table. In my early adulthood I made a living drawing realistic food products for advertising, so this was kind of a nostalgic process for me. I did so much of that in the old days that I can actually draw things like this without any reference.

Speaking of things I drew one time, I have a limited-edition Bizarro T-shirt for sale right now, but only until July 13th. That’s the “limited” part. I offered this shirt for two weeks back in 2014 and it sold pretty well. Since then, the Jazz Pickles that didn’t get one then have been asking me to bring it back, so here it is. Many of those who did buy it back then have reported magical powers and large amounts of cash coming their way. I can’t vouch for the authenticity of those claims but, really, why would a person lie about a thing like that?

And now, more cartoons for your chuckleness… 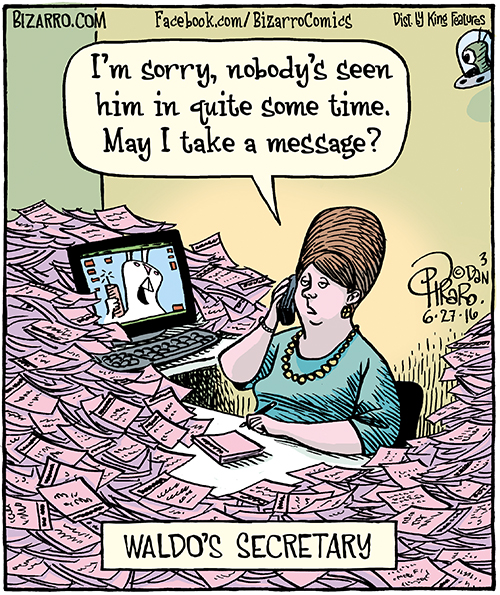 Waldo has been missing for decades now and his “While You Were Out” messages are starting to stack up. His secretary’s hair is stacking up pretty nicely, too. This character is modeled after my memory of a 7th grade English teacher I had in Tulsa, Oklahoma. I can’t remember her name right now but I think it was something like Mrs. IDon’tThinkYou’reFunnyYouArrogantLittleShitNowSitDownAndShutUp. 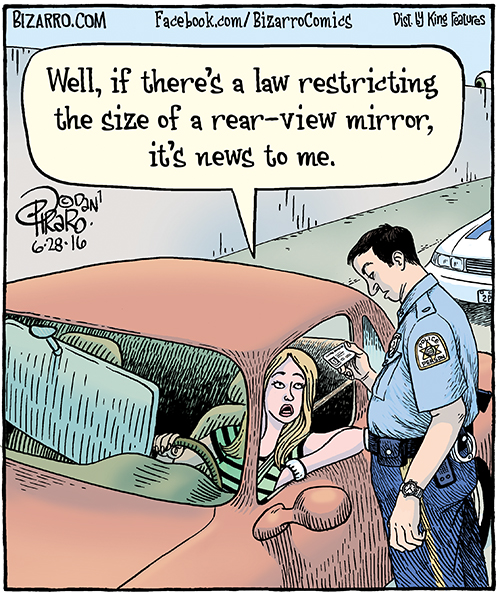 As an avid motorcyclist, I am always acutely aware of what other drivers are doing and it scares the hell out of me when I see people on their cell phones or primping in their rearview mirror. This idea came from that terror. 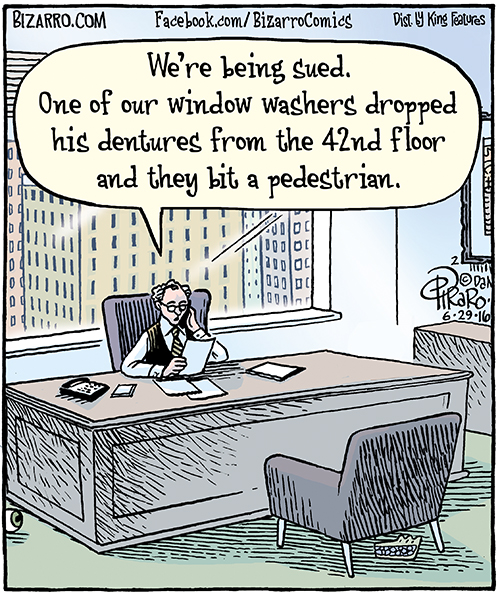 Here’s a strange thought that occurred to me one day. A set of dentures dropped from 42 flights up would do a lot more damage than a “bite,” but you get the idea. 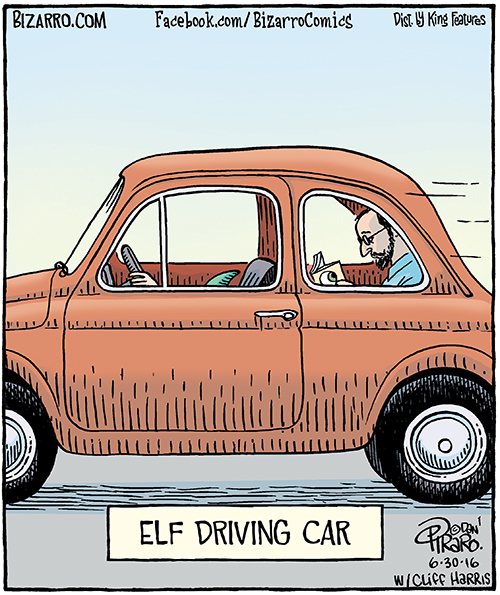 Here’s one of my favorite cartoons in a good while. The idea came from my good buddy, Cliff Harris The King Of Wordplay. Like so many of Cliff’s ideas, it is simple, unexpected, and hilarious. That’s me in the back seat reading, doing another one of my homages to Alfred Hitchcock, who used to appear as background characters in his films. Cliff and a couple of his lifelong buddies have put out a pretty funny book of silliness which you may find amusing.

Folks who follow the news might think I published this cartoon in response to the story this week about the first fatality arising from a person using the enhanced auto pilot feature of a Tesla. It was not and I would not do that. My cartoons are submitted for publication four weeks before they appear online and in newspapers, so I can’t predict these kinds of coincidences. I think it is worth noting that Tesla’s cars are not advertised as “self-driving” and the person who died in that crash was not paying attention, expecting the car to do more than it was designed to do. Tesla’s feature is basically a cruise control with advanced features and is not intended to be self-driving. I think self-driving cars will be safer than human-operated cars one day but that hasn’t happened just yet and the Tesla that crashed was not designed to be one of those cars. 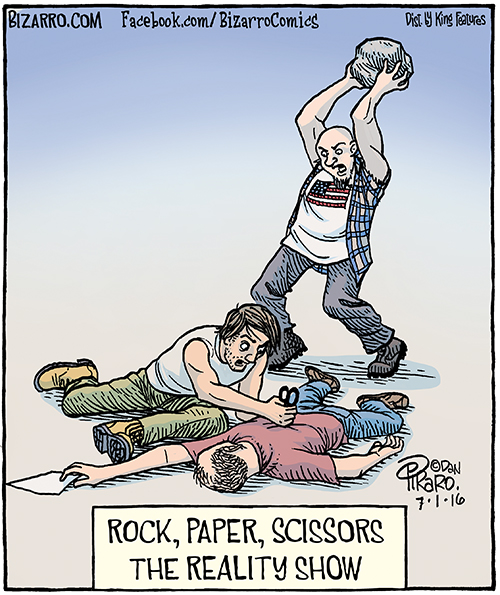 One reader chastised me for this cartoon about “reality” TV as being too violent in light of all the violence in the news lately. My response was the same as it always is in these cases: Humor is a time-honored way of dealing with life’s inevitable tragedies; cartoons like this one do not incite more violence; the human world has always been an exceedingly violent one on a daily basis, it only seems more so in recent years because of the efficiency of news media. It is my belief that, since for the vast majority of our species’ time on earth we lived in relatively small villages, we’ve only evolved to process the amount of tragedy that befalls a small group. With the advent of highly-efficient, international journalism and the 24-hour news cycle, we are exposed to many more tragedies daily than our ancestors had knowledge of in a year. We’re not biologically equipped to know this much, so, quite understandably, it becomes a great source of fear and anxiety for many and the world seems like an increasingly dangerous place. Humans are dangerous, yes, but the notion that we are getting worse is mostly an illusion. 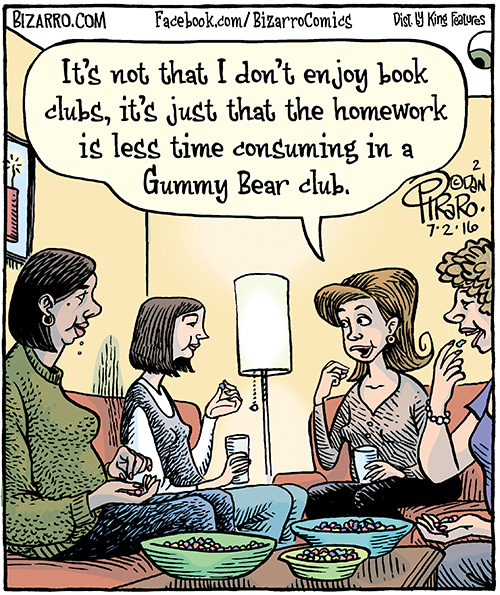 I got a big kick out of this cartoon when I first wrote it. I’ve never joined a book club but I’m an avid reader and sometimes I bite into books that are so lofty that they become hard work. I’ve known people who never read because it reminds them of homework and thought perhaps some of us would be happier in a club like the one above.

That’s the week in Bizarro cartoons, thanks for reading along, Jazz Pickles. If you would forward my T-shirt offer to anyone you think might be a Bizarro fan, Olive Oyl and I would be most appreciative! Facebook recently changed their methods so my posts on there don’t reach nearly as many people as they used to. The Interwebs continue to conspire to make it easier for artists to get their work in front of eyes, but much harder for us to get paid for our efforts.

I hope my American readers have a dandy 4th of July tomorrow and will remember to let go of the firecracker before the sparkles on the string get to the paper part.