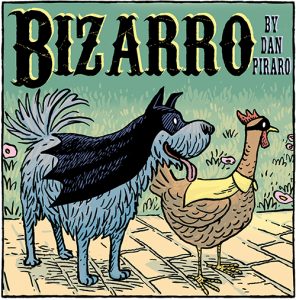 (View an embiggenated version by clicking the “R” on Robin’s chest.)

Bizarro is brought to you today by The Men Behind the Legend.

If you’ve ever attended a party with a romantic partner, you’ve had a moment like this. One of you objects to the way the other was behaving at the party and it leads to a late night argument. Often it is about jealousy but sometimes it’s about something one of you said that was perhaps a bit too honest for polite company.  I’ve been on both sides of this equation so when I thought of this scenario between Batman and Robin, I got a chuckle out of it, but more importantly, I sympathized with both of them. Batman just thought he was being funny and didn’t know he was embarrassing Robin, Robin felt forced to politely play along with his partner’s pathetic pandering for laughs. I’m not the first to suggest the ambiguously gay relationship between the two. The comic books themselves had many unusual moments between them, like these two, and then humorists over the years have taken the ball and run with it. (pun half intended) 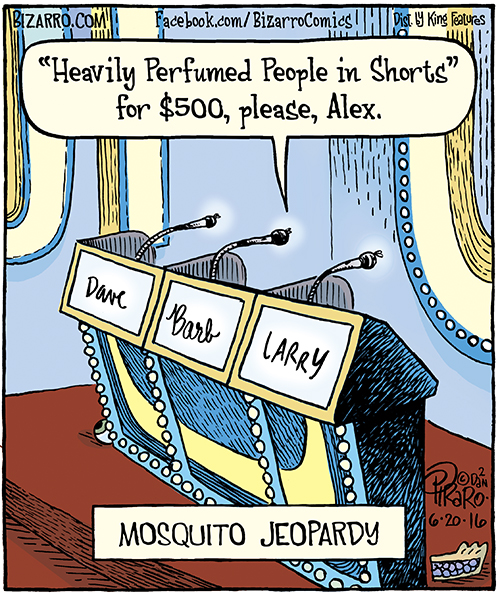 Olive Oyl and I watch Jeopardy every weeknight for three reasons: 1) So that we can feel smart when we answer questions correctly 2) So we can learn new things 3) For the innate humor in watching Alex Trebek try to navigate the impossible task of interviewing socially awkward people about utterly uninteresting details of their lives. Alex: I understand you asked your wife to marry you in an interesting way. Contestant: Yes, I, um, wrote “will you marry me” on a watermelon and then I, um, waited for her to find it in the refrigerator. Alex: Good for you.

The Zika virus potentially using this year’s Summer Olympics as a vehicle to more quickly spread to every country around the globe (other than Russia whose team was banned for doping) inspired this cartoon. 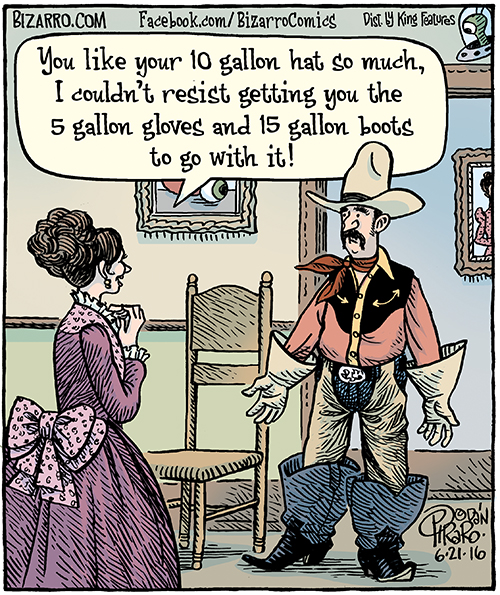 I enjoy cartoons about people making themselves look ridiculous but thinking they look cool. Not that this guy is doing that and not that we don’t all do that to some degree. Here’s a picture of me in high school, when I thought I looked super cool. 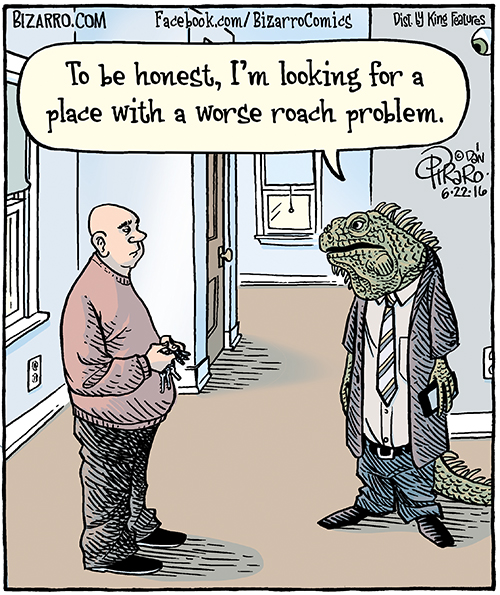 I don’t know what this cartoon with the apartment-hunting iguana is about. I just thought it was amusing and I felt like drawing an iguana. I nearly got an iguana as a pet back in the 90s, almost entirely just so I could name it “Fluffy”. 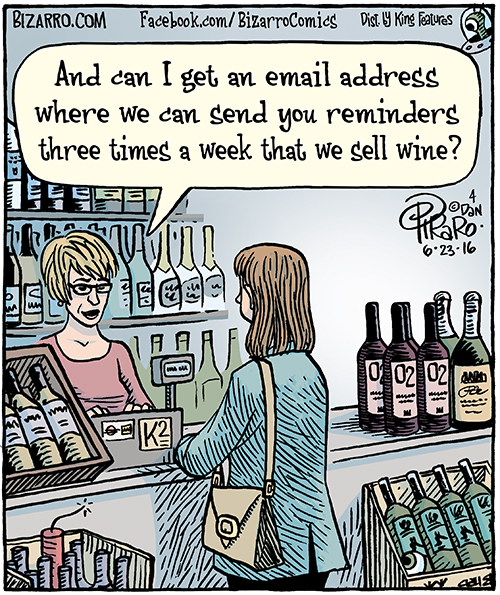 Here in Southern California, we have a chain of discount liquor stores called BevMo. I shop there regularly and enjoy it but I made the mistake of giving them my email address and now I get emails two or three times a week reminding me to buy more booze. This also happens with CVS, a drug store chain. No wonder this country has a drug and alcohol problem. 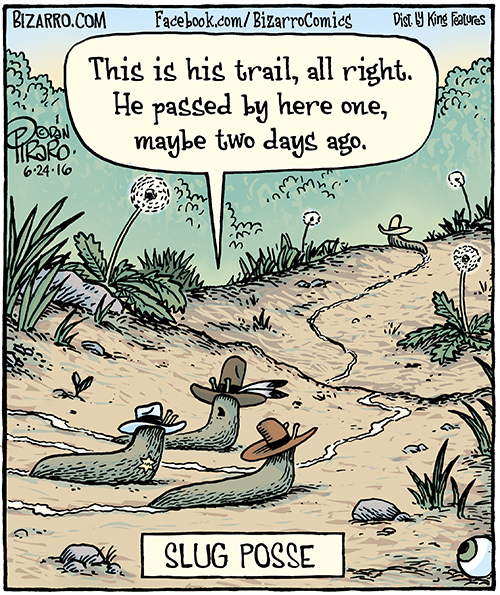 A reader very helpfully reminded me via a FB comment or something that slugs are hermaphroditic and so are neither “he” nor “she”. Another told me that snails don’t actually travel as slowly as I depicted here. Gee, thanks. Does anyone care to remind me that gastropods don’t wear hats? 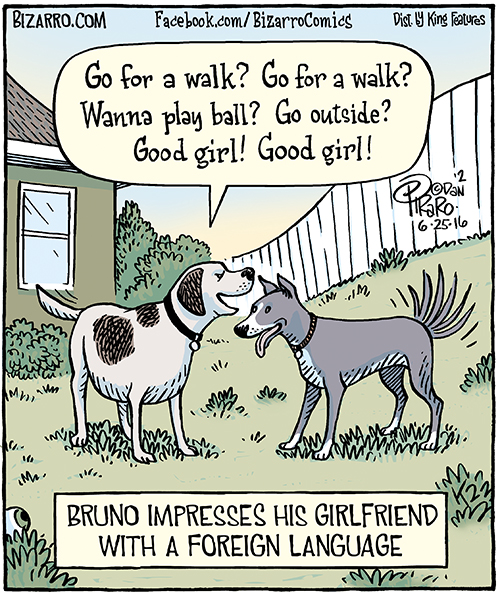 Our dog ran away from home this week. Olive Oyl and I stepped out for one hour and when we returned, Jemima was gone from our backyard. We have a tall, wooden fence with two gates and both were still closed and latched. We were dumbfounded about how she got out and worried sick, and, to make matters worse, because she had been given a bath that morning before we left, she was not wearing her collar. We got in our cars and trolled the neighborhood hoping to spot her. We made posters and plastered them at intersections. We did some stuff online at various lost pet sites. It was a sad afternoon and evening and neither of us slept well that night. The next morning, still laboring under a dark cloud, we checked the local shelters’ websites and spotted her mugshot at the local Humane Society. Eureka! She had a hangover and a bad tattoo but other than that, she seemed fine. We had them give her an electronic chip in case something like this happens again and we’re never going to take her collar off again. We also fitted her with a helmet with a GoPro camera on it so we can find out how she got out of our yard if she manages another escape.

Last thing: some friends celebrated their 33rd wedding anniversary last week and the female half commissioned me to do a cartoon as a gift to her hubby. They (and I) were all raised Catholic and got to joking recently how since the communion wafer is supposed to be the “body of Christ,” would vegans allow themselves to eat it? She asked for a cartoon about it so I came up with this one. I think it’s pretty funny but it might be problematic to publish it in the papers as a Bizarro cartoon, so I’ll share it with you here. 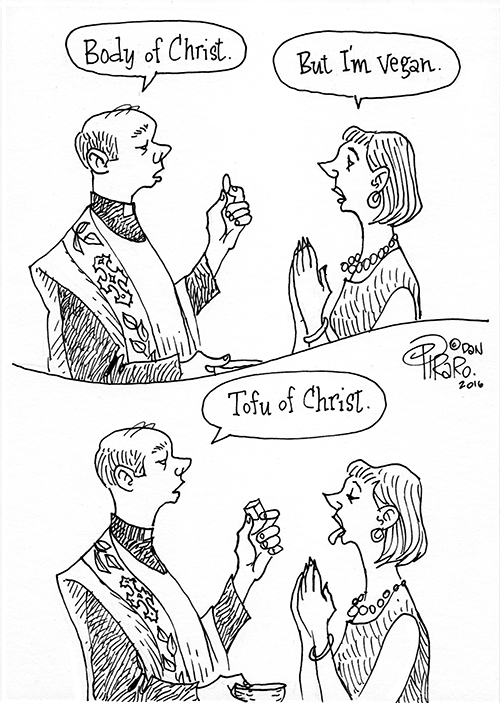 That’s it for this week, Jazz Pickles. As newspaper readership shrinks and more people read my work online for free, I deeply appreciate you folks who have made one-time donations or set up a small monthly patronage to keep me going. If you’d like to help me and Olive Oyl continue to afford poster board and markers for our Lost Dog signs, please do so by clicking Bunny and the “Tip Jar” logo in the margin of this blog! Or click here!