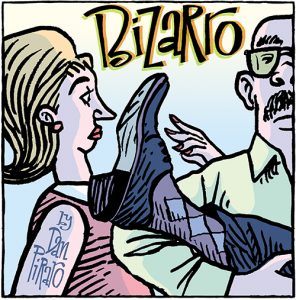 (To find all 13 of the Secret Symbols, you may want to embiggenate the cartoon, which can be achieved by clicking either of the woman’s knees.) 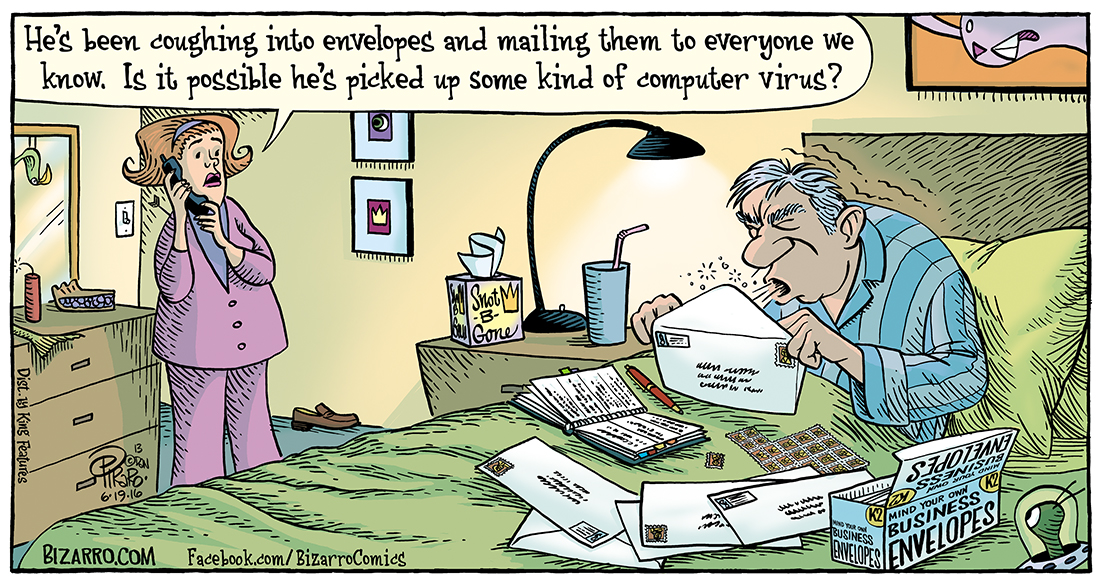 Bizarro is brought to you today by An Open Letter To God.

Whether you’re liberal or conservative, you’ve likely noticed we Americans are in the middle of the strangest presidential election since Cookie Monster ran against a talking bullfrog back in the late 19th century. Which, for those of you who have no knowledge of history and will believe anything someone tells you in an authoritative voice, never happened. This strange race taking place in front of us now IS happening, however. I recommend fastening your safety harness, strapping on a helmet, and grabbing a barf bag. This could get messy and dangerous.

Though I can’t offer you a solution to the heinous position we’ve put ourselves in, I can offer these cartoons for a few moments of distraction.  Why not begin by embiggenating the Sunday cartoon above and having some fun with the background jokes and Secret Symbols? 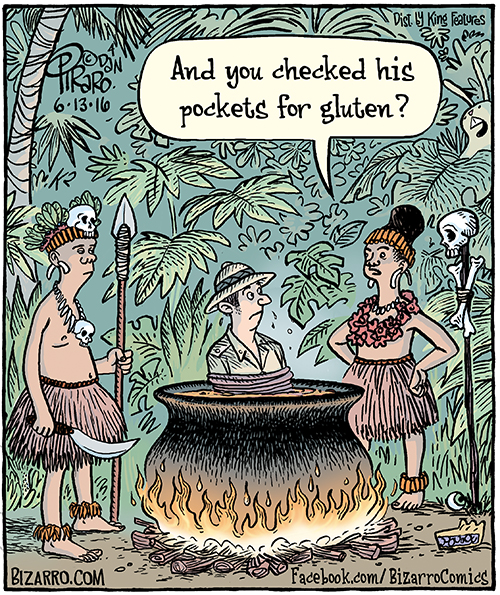 I posted this gluten gag on my various social media sites with this tagline: “I have a theory that all trends eventually make their way to every corner of the planet.” Most people thought the cartoon was funny, but a few people who suffer from celiac disease scolded me for making fun of a serious disease. I know a person with celiac disease and I know it is awful. But does that mean that no one can ever make a joke about it again? Especially since the overwhelming majority of people who avoid gluten these days do not have CD, and, in the absence of any science that backs up their suspicions of the evils of gluten, are mostly just following a fad? No, I don’t think it does. (And yes, I know you have all kinds of good reasons not to eat gluten and are not just a mindless fad follower. I’m not talking about YOU. I’m talking bout other people.)

Another person said this cartoon was racist. I disagree on the grounds of the definition of racism. Depicting people who existed historically in a manner which is not a judgement about them is not racist. Racism has to intentionally attach negative attributes to a person because of their race. Like Donald Trump does every time he talks about Mexicans or Muslims. (I know that Muslim is a religion, not a race, but I’m not sure Donald does.)  This cartoon says nothing about any race. It says something about food trends. 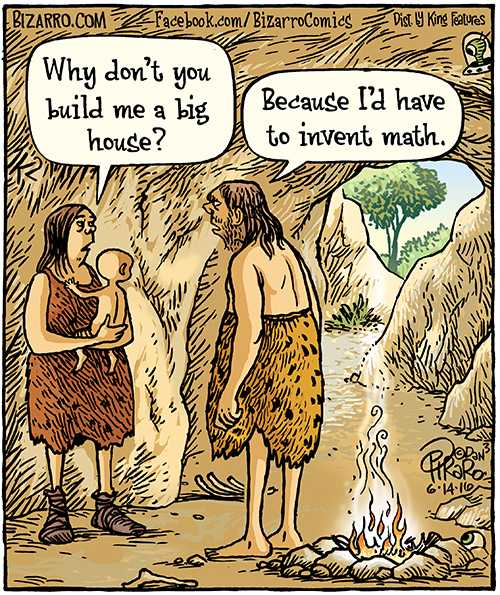 I have a love/hate relationship with math. I hated it in school because I was never particularly good at it––except for Geometry, which I could visualize––but I’m fascinated by the majesty and magic of it. I saw a NOVA episode recently called “The Great Math Mystery” and it blew my mind. I often wish I could get really deep into high-level math but I think it’s a genetic skill like being a good artist. My brain just won’t do math beyond what the average 12-year-old learns. Attempts to force it to have resulted in tears. 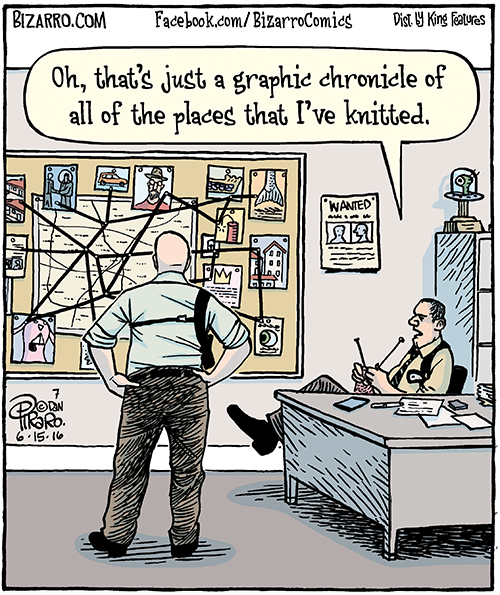 If I knew how to knit and wanted to spend some time doing it, it would be fun to knit giant, ten-feet-tall sweaters for multi-armed monster aliens. I’m guessing some artist has already done this, though. Here’s my favorite knitting cartoon I’ve ever seen in my life by anyone. It is a coincidence that I happen to be the one who did it. (Yes, I am aware that there isn’t a great deal of competition in this category.) 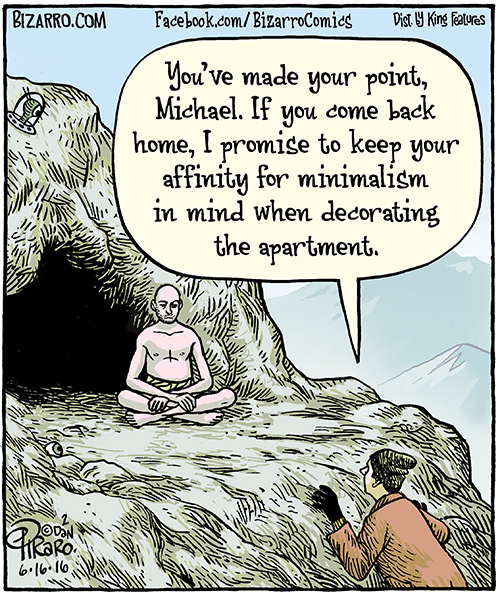 This guru gag was about me looking for a surprising caption for a cliche picture. We’ve all seen hundreds of cartoons about the climber asking the guru in the high-mountain cave some secret to life or whatever. Here, it’s a gay couple who are arguing about how to decorate their apartment. I thought it was sort of surprising and funny. When I submitted it for publication four weeks ago, I did not realize that a massacre of LGBTQ people would occur just a few days before it appeared in newspapers worldwide. I was worried some people might think I was making fun of gay people in response to the Orlando tragedy, as sometimes happens, but I’ve not heard from anyone. To be clear, I’m not making fun of anyone here, gay or otherwise.

On a related note, I simply cannot believe I live in a country where politicians are debating whether or not a person on a terrorism watch list should be allowed to legally buy an assault weapon, which they now are and have been for a long time. It’s like debating whether you should allow a convicted pedophile to operate a daycare center out of an underground bomb shelter in the woods. Polls show most Americans favor a ban on assault weapons yet our politicians pander to the minority. It’s disgraceful. 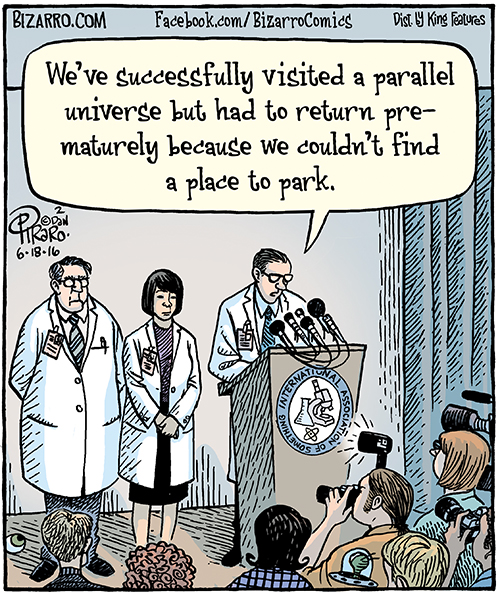 Here’s a cartoon in which I attempt to draw a parallel between parallel universes and parallel parking. I don’t think it is very successful. Let’s move on.

This was my most popular cartoon of the week, which is no surprise. It isn’t surprising that liberals think that the Republican party nominee for president is dangerous; that always happens. What is surprising, however, is that such a large number of Republicans think their own nominee is dangerous. That’s never happened before. They are right, of course, and anyone who knows much at all about the political history of the West knows what a catastrophe it would be for Trump to be elected. He is, quite literally, the definition of an authoritarian fascist. These guys often get elected but they never turn out to be a good idea. Countries who do so invariably pay a high price and regret their foolishness profoundly and for decades. I’m trying to be optimistic and believe that there are enough Americans who see this to prevent it. It’s still a bit terrifying, though.

Thanks for reading this far, Jazz Pickles. If you’d like to become a patron of my efforts in the field of comedy and art, please consider clicking on the Tip Jar in the margin of this blog and making a small monthly contribution or a one-time donation. Since cartoons are routinely given away on the Internet for free, it is becoming more difficult for guys like me to keep doing what we do. Your support is deeply appreciated!

Another way to support my work is to nab one or more of these really super wonderfully nice, limited-edition, signed-and-numbered-on-my-own-kitchen-table, framed art prints. Neither you nor a person you gift one of these to will be disappointed. Have a look at these babies here.