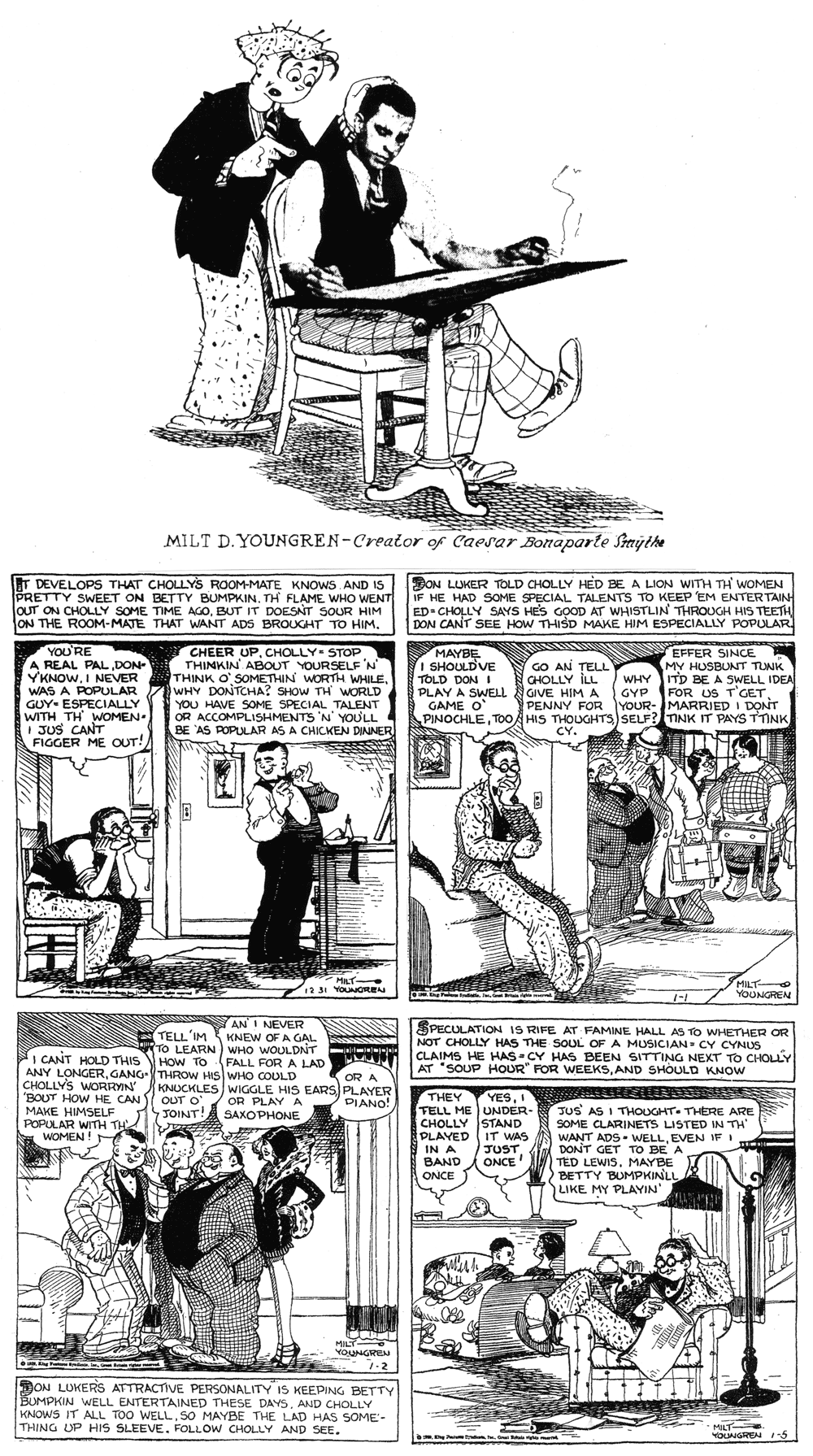 Today’s blog features a most unusual and highly insignificant KFS panel that you might help your old Archivist with.

During the past two weeks, we looked at the two versions of a KFS panel known as Room and Board, the first being the little-known panel that had been created by Sals Bostwick that went through five cartoonists and two syndicates in its short run of 1928-32. The second was the warmly recalled Gene Ahern classic of 1936 to 1958.

At the same time as the Bostwick creation, King Features also fielded a very similar-appearing  panel complete with a boarding house full of oddball characters and an old prune landlady. But instead of blustery cigar-chomping Windy Wicket or Judge Puffle as the lead, it’s instead young, go-getting, bespeckled “Cholly.”

This was a highly specialized panel, though, and the similarities end at the point of the material, the sense of humor, if you will. Cholly and company are selling something. Want ads, in fact. He wants you to buy, read, use and to love, want ads. To demonstrate just how life-enriching they can be, every day he or his cohorts somehow engage in want ad usage.

Milt D. Youngren (1899-1969) was a bull pen guy for the Chicago Tribune syndicate in the 1920s, a sometime ghost for Ferd Johnson on “Texas Slim.” He was also doing want ad page art, where he must have found such things fascinating. It apparently was a longstanding passion. He did a strip called “Caesar Bonaparte Smythe” for Editor’s Feature Service that lasted for less than a year in 1926-7, but in late 1928 he had a new approach for something to do with want ads, and King Features took him up on it with a contract deal.  His brainstorm was our little venture today. According to Comics scholar Allan Holtz, the panel was referred to as Cholly the Classified Kid in Editor& Publisher, but as Classified Cholly in Who’s Who. No actual examples ever have been reprinted until now, as I have located it, some of it anyway, in one paper, the Witchita Daily Times (Witchita Falls, Texas).

The frugal Texans ran them amongst their classified ads, as they were intended to be, but didn’t waste any unnecessary ink running the feature with a title! Anyone able to put the exact name to this panel?

It’s just there one day, (31 December 1928), and appeared daily for almost two months, and vanishes, midweek, after the 27 February 1929 episode. Both the beginning and ending of this interval have it in the middle of their feeble stories, so I can’t tell when it precisely began or ended. Not much longer than this, as I’m assuming it was a resounding dud. Want ad pages usually had stock ads that a paper would only have to alternate between for years, though there have been other special want ad page strips and panels before and after this. Youngren himself even did another, ‘Fair Exchange,” in the late 1930s for McNaught Syndicate, though that was a gag-a-day panel without continuing characters. Youngren also contributed to a want ad writing contest called “Want Ad Wanda” in 1930. Obviously, his soul had been sucked into the dark want ad vortex. 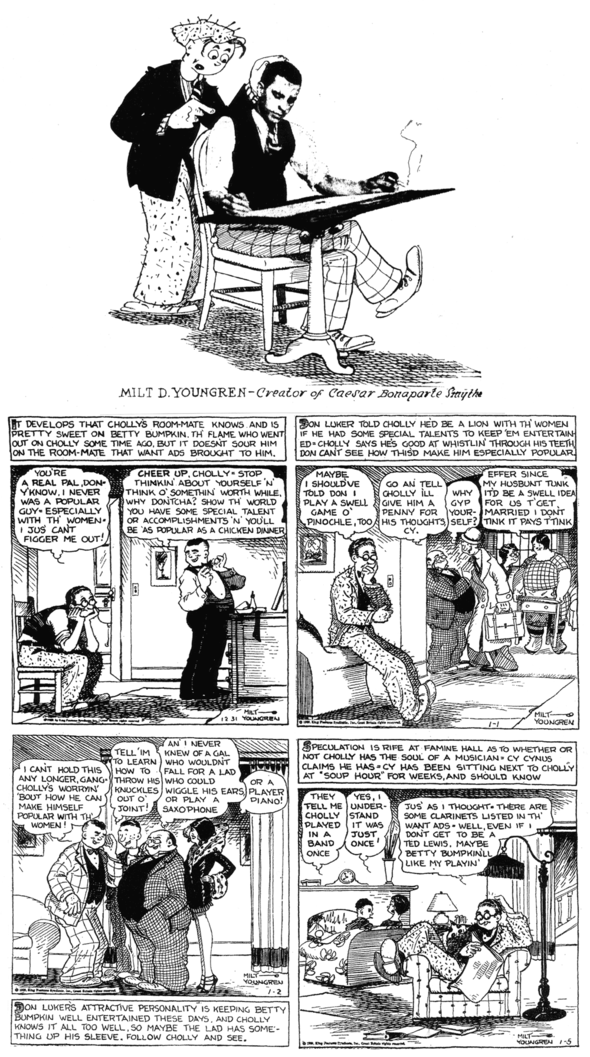 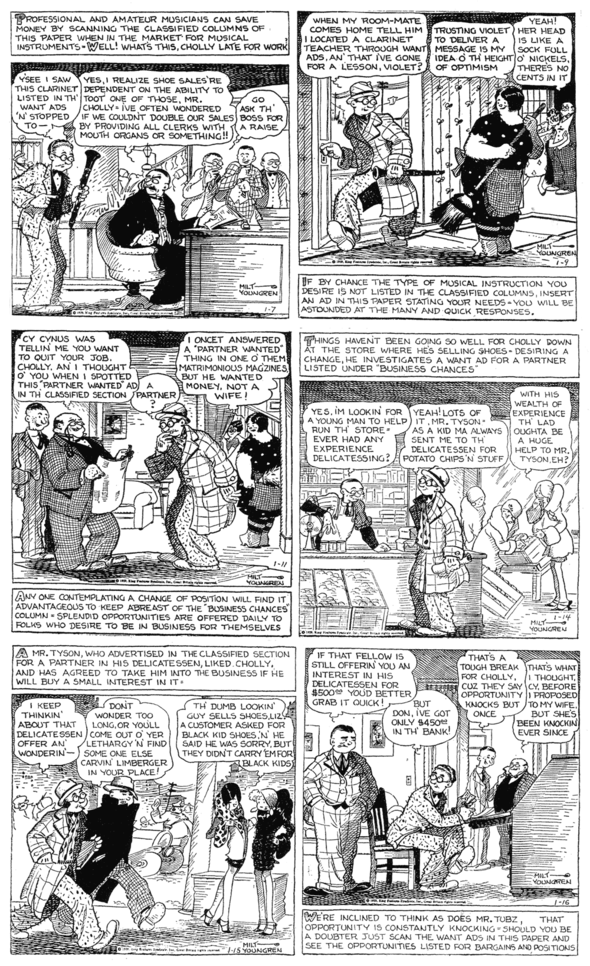 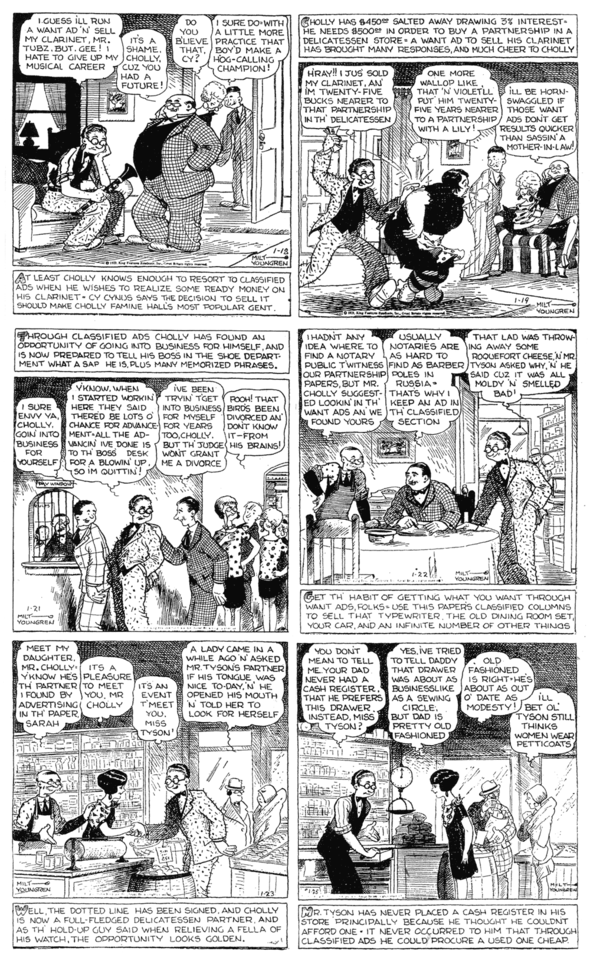 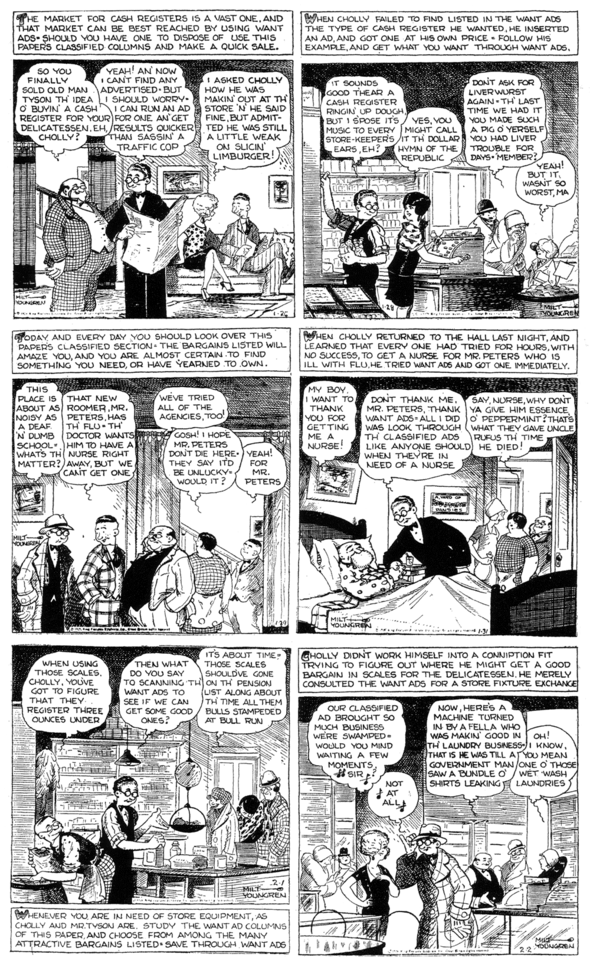 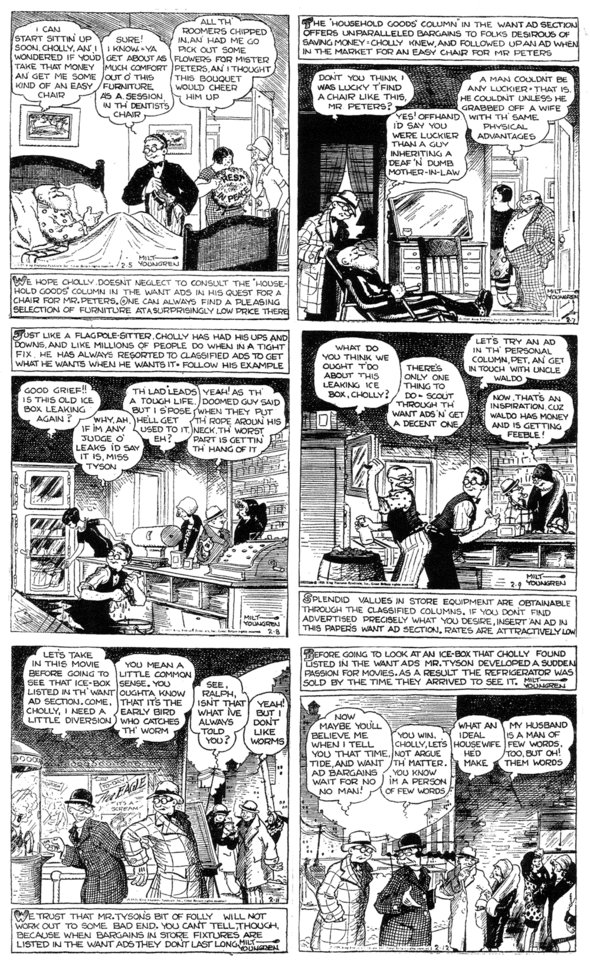 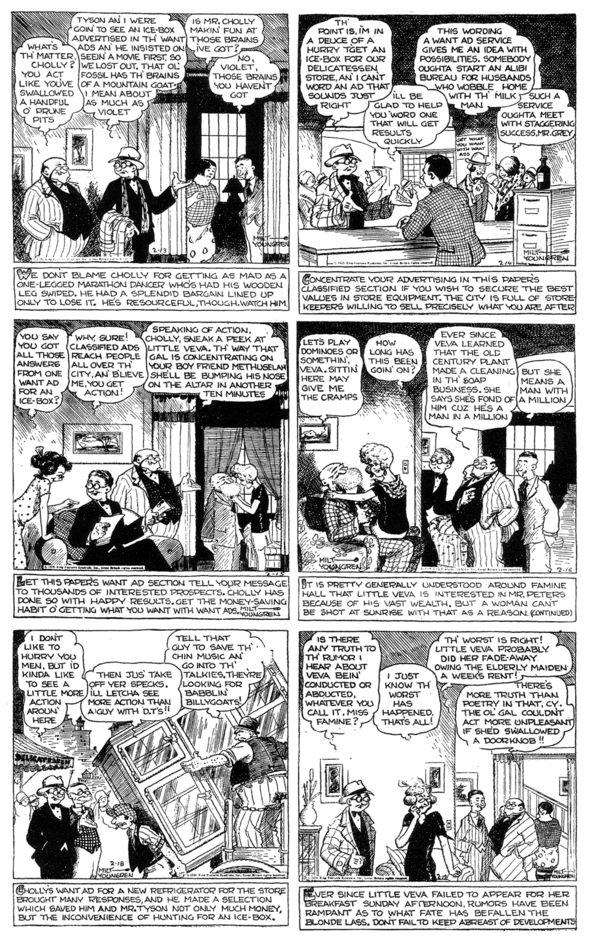 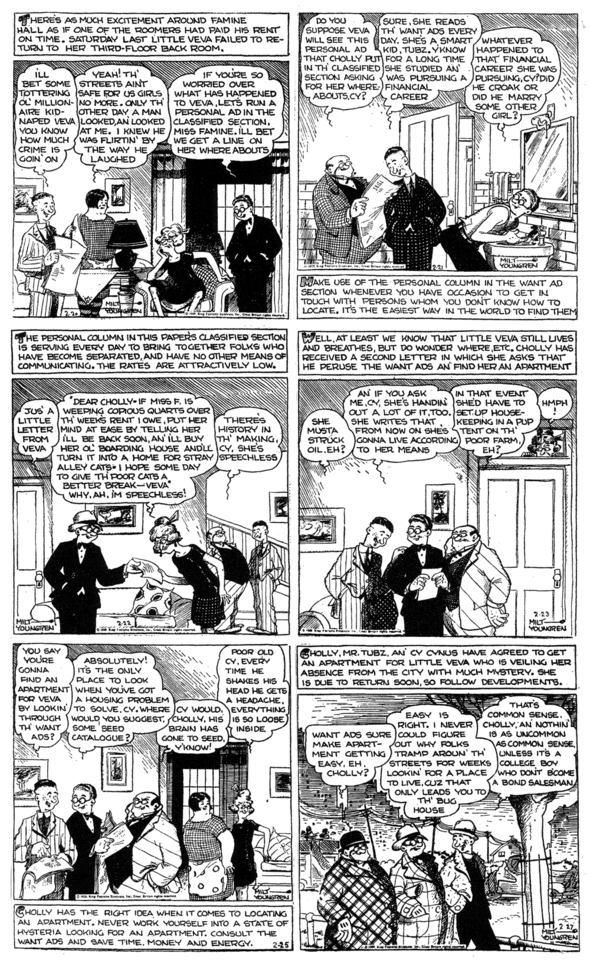 The most famous of this subgenre was “Quickies” by Ken Reynolds, which lasted more than forty years from the forties to eighties. Though that self-syndicated panel featured an older couple, every gag/ad stood alone. Cholly had all the trappings of a full-fledged comedy series. It even looked good, with well delineated characters, but it seems a waste, like you feel you’ve been cheated out of a real effort because of the sales message.

Youngren went on to do nothing that is remembered today. At the end of his life, he was designing gags on the back of Kool-Aid packets. He never really meant a lot to me, but I can tell you another factoid about him, that in 1919, in the army, he was stationed in Bremen, Germany as part of the post-war occupation forces. Somehow, I fell into possession of a small scrapbook he kept of his time there. Too bad it couldn’t have been Walt Disney’s!