My dad is a pretty great guy, and he’s one of the reasons that I love comics!  This weekend, we’ll be celebrating all the amazing fathers and father figures in our lives, so I wanted to get a head start by asking our cartoonists to share their thoughts on dads, father figures, and fatherhood.

Happy Father’s Day to all the great dads out there!

My father was a career Army man. He volunteered for service the day after Pearl Harbor was attacked in 1941. In my graphic memoir about my family, “Invisible Ink”, I included a section where I came upon a box of letters he wrote to my Uncle Al in 1943, when they were both training for overseas duty. The letters were a revelation to me. My old man and I had a difficult relationship, with much arguing and anger. But his voice in these letters was one I’d never heard —confident, supportive, funny. Though I wasn’t born yet, this is the father I’d prefer to remember now. 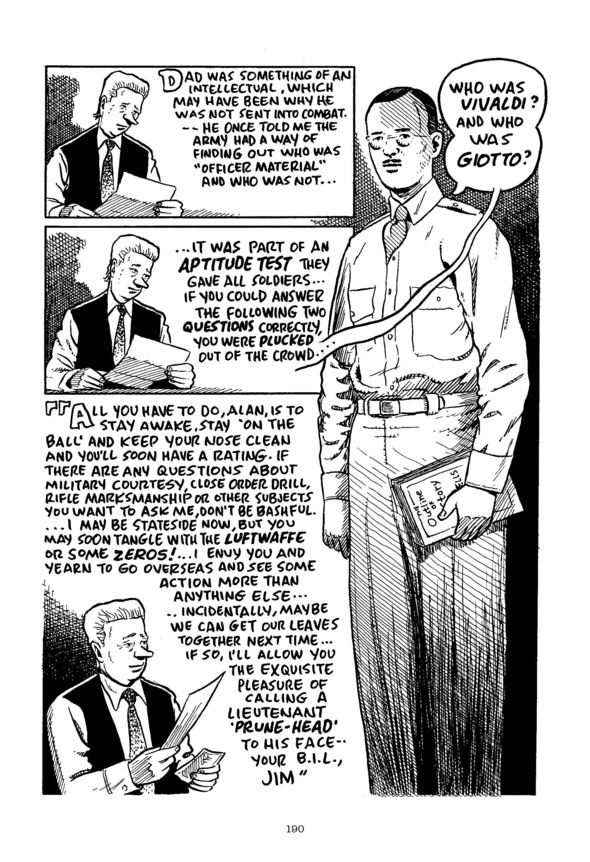 Snuffy Smith is a father to his son Tater and a father-figure to his nephew Jughaid. Here is one of my favorite Father’s Day themed comic strips from the archives! Bodacious Father’s Day wishes to all the Dads out there in our readership!

Hey! Not all fathers are founts of strength, wisdom and paternal comfort. There are a few out there like Grandpa Fernwilter. (The whole story is in this week’s edition of my blog.)

My dad is a big fan of drawing for fun. He introduced me to Betty Edward’s book, “Drawing on the Right Side of the Brain”, which revolutionised the way I approached drawing. I can actually feel when my brain shifts from a logical, left-handed mode, to a creative, right-handed mode. My drawing always improves when that happens.

This will be my third Fathers Day without a father, stepfather, and father-in-law to celebrate with.

I’ll sorely be missing them on Sunday. All three of my dads were forever my biggest fans — and I theirs. But one thought brings me a sniffly smile, they all proudly saw “Dustin” make it to “the show,” living long enough to see my name alongside Steve’s on a syndicated daily comic strip after decades of watching me pitch comic strip idea after comic strip idea.

Ever-encouraging me to pursue my dream of being a cartoonist, my dad, Jim, had been a draftsman in his younger days and not an artist, but he was a creative genius when it came to fixing and building things. Don’t know how he did it, but he managed to build, hide, and surprise my brothers and me with a giant, remarkably detailed table slot car track one long-ago Christmas morning. For later Christmases he made an amazing miniature castle for us boys, and a beautiful doll house for our sister. Most notably, he built a pair of sturdy, indestructible ranch-style bunk beds for us one year. We used to always joke the safest place in the house in case of a nuclear attack was underneath them.

Dad made my first drawing table too, it was a gift for my 14th birthday.

My dad worked his retirement years at Home Depot. As I say, the guy could build and fix anything. So when Steve wrote up a Home Depot gag for a Sunday “Dustin” a couple of years back, I just HAD to draw Dad as the associate helping Helen. He would have SO loved seeing himself in the funny pages… (You have to imagine his word balloons read in a soft, Alabama accent.)

Here’s a favorite photo of my cartoonist-at-heart dad, taken at my drawing table during a visit about 15 years ago when I was an assistant on “Blondie.” He got such a kick out of inking-in Dagwood’s black suit for fun one day in my old studio.

I’ll always be missing you, Dad, Big Bill, and Da… but know I’ll keep you close through Dustin’s dad, Ed.

Hello from the Borgman family, Christmas 1956! Those are my sisters and me astride my dad, widely known and loved as Big Jim. Dad was no stranger to carrying a load on his back. A kid through the Great Depression, and a WWII veteran, he put his four kids through college on a sign painter’s wages. And yet his eyes twinkle in every photo I have of him. Happy Father’s Day, Dad! 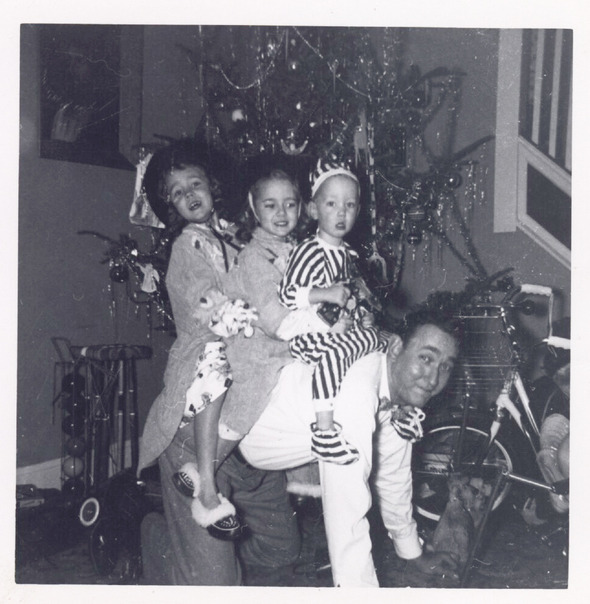 I’ve had many important father figures in my life. For starters, there was my own dad, who died way too soon. I named my newest character, Ben, after him. My dad was my constant champion, and I was definitely a daddy’s girl growing up. He was quiet, sweet, warm and corny in the best way. I miss him every day.

The other father figure in my life is my husband, Mike (to my kids, not to me!). He’s a strong role model for our girls… hard-working, loyal, and funny (very important). I respect him to no end. He’s also taken over the role of being my number one supporter in work and life. That’s a priceless thing for my kids to see.

Dennis is ALWAYS lookin’ out for Mr. Wilson……even on Fathers’s Day. 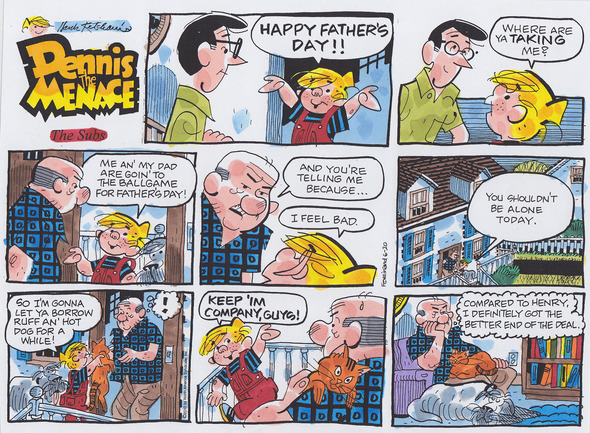