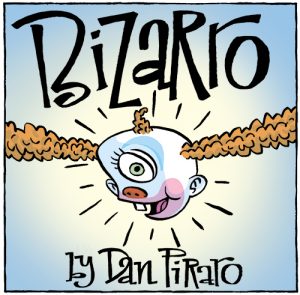 (You, too, can achieve cartoon embiggenation by clicking any of these images.) 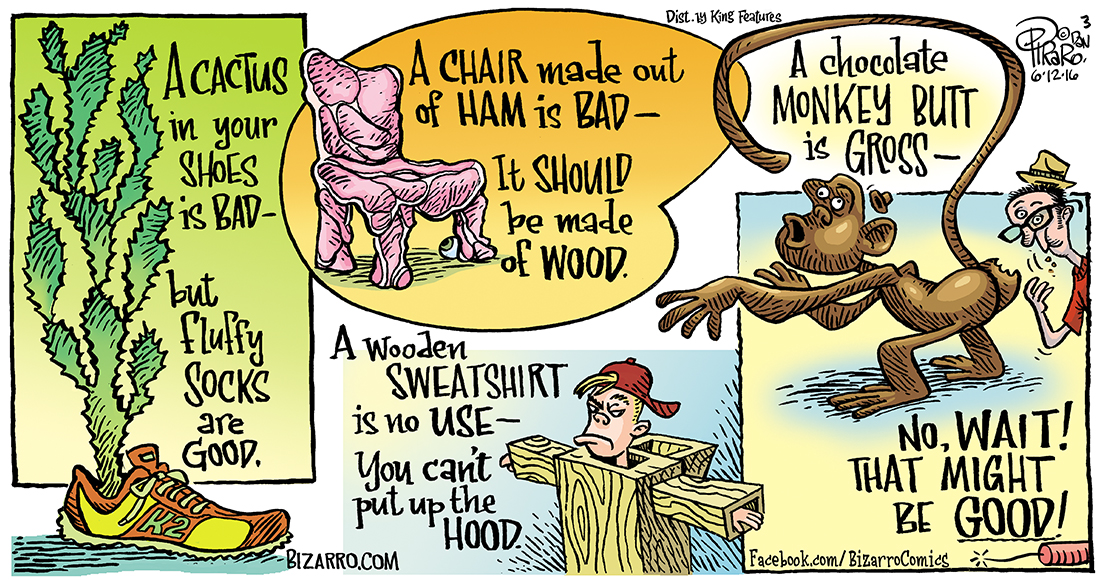 Bizarro is brought to you today by Bathroom I.D. Issues.

At various times in my adult life I have gone through periods where oddball children’s rhymes occur to me. I write them down with the intention of someday publishing a book of them but I’ve never gotten around to it. Here is one converted into a Sunday comic instead. 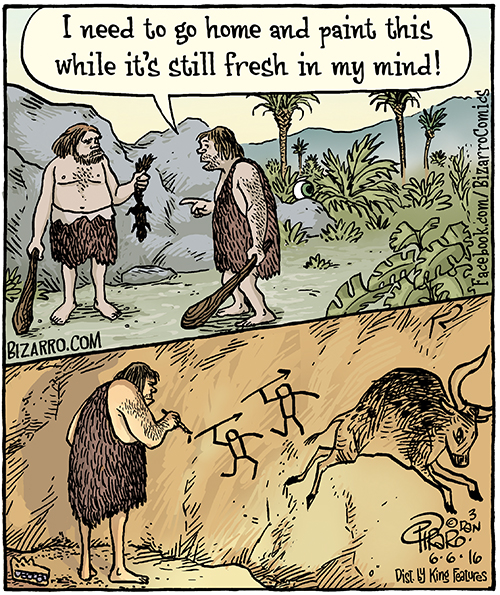 Monday’s cartoon about the primitive man misrepresenting his hunting skills with cave art led a Jazz Pickle to send me a link to an article on National Geographic’s site, which I’ve linked to below. As you may know, some ancient cave artists put their hand on the wall and sprayed paint around it by blowing it out of their mouths to create a kind of stencil of their hand. Recently, a scientist decided to measure the proportion of the fingers in those stencils and discovered that many cave artists were likely women, which has not been the traditional belief.

Which brings up another interesting fact you may not be aware of: men’s and women’s fingers have different proportions to each other––men’s ring fingers tend to be longer than their index fingers, women’s are about the same length. Another fascinating study was done a few years ago showing that both male and female homosexuals tend to have finger lengths that match the opposite sex. Sorry, homophobic religious bigots (as distinguished from the many believers who are not discriminatory homophobics) but this is physiological evidence of what people with common sense have known for ages: Our sexual orientation is not a conscious “choice” and therefore cannot be a sin. Why not take a step out of the Dark Ages and join the enlightenment.

Here’s the story about the cave art. 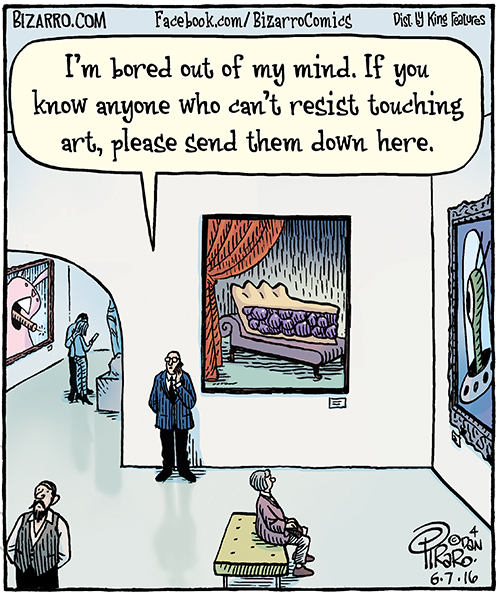 I am a person who lives in terror of being bored against my will, so I tend to take note of jobs that I think would be the most horrible. Toll booth operators are at the top of my list as well as museum guards. As a museum guard, the most exciting thing you are likely to ever do is ask someone to step back away from something. Other jobs I could never tolerate for reasons of boredom include anything in a law office (including being a lawyer), accountant, long-haul truck driver, train driver, and traffic cop. There are millions more, of course. I count myself exceedingly lucky to have been able to cobble together a living as an artist. I’m not rich, but I’m not trapped behind the microphone of a drive-in window, either. 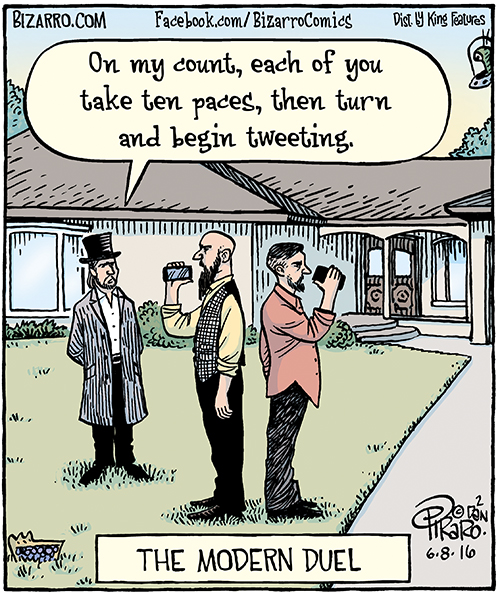 The current presidential campaign gave me this idea but it happens in all areas of life these days. A couple of hundred years ago, when Trump insulted Cruz, Cruz would have challenged him to a duel, they would have met at dawn in a field somewhere, and the world would be rid of one of them. With Trump’s penchant for childish insults, that field would quickly either include Trump’s yellow-orange corpse or, if he were an amazing shot, would be littered with bodies. My guess is that had he lived in those days, Trump would either have learned basic social etiquette, or would not have lived remotely long enough to qualify as a presidential candidate. (Minimum age being 35 years.) 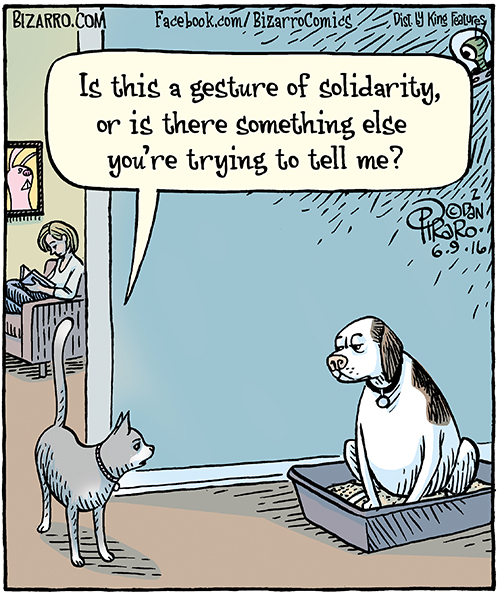 This cat/dog cartoon was inspired by the strange battles over public restrooms that so many people in our country are currently having conniption fits over. In my view, we should allow everyone to use whatever restroom they want because, guess what, they already do and it’s been no big deal. If someone wants to victimize someone in a public restroom, a law won’t stop them. And transgender folk are not looking to victimize people, they are looking to not be victimized by the same bigots who want to pass these laws. I saw a terrific meme somewhere on the Interwebs that said, “It wasn’t about water fountains in the 60s and it isn’t about bathrooms now”. It’s about bigotry and, like most of these campaigns to scare the shit out of so-called “decent” people, there’s nothing there to be afraid of. 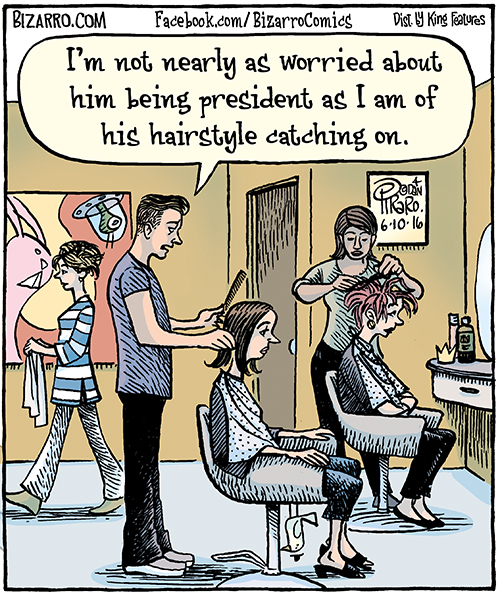 My latest cartoon about Trump got quite a lot of play on my Bizarro FB page this week, and sparked some heated political debate. I’m proud of this one because it’s about Trump without mentioning him by name, and it’s fairly non-partisan because everyone on both sides of the aisle can agree on one thing: Trump’s hair is a ridiculous hybrid of a 70s gameshow host, a TV evangelist, and a rodent dipped in orange paint. 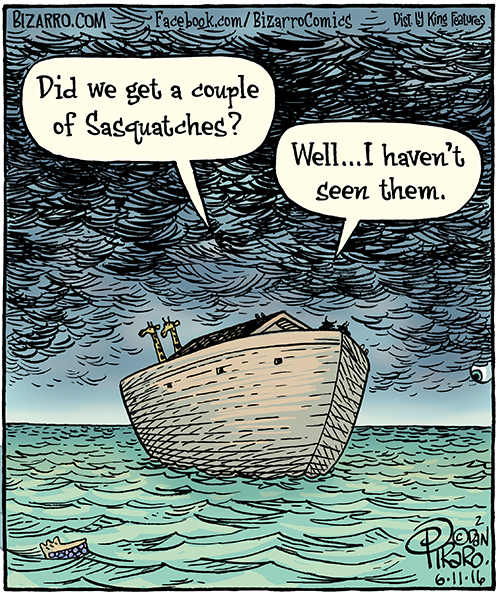 Yes, another Noah’s Ark joke. I’m sorry. For some reason I’ve been thinking of a lot of these lately. No idea why. But this concept amused me: a person who is likely to believe in Sasquatch (Bigfoot, et al) is also likely to believe that the myth of Noah’s Ark actually happened, which means that somewhere out there are any number of people who would think this cartoon is a logical, scientific explanation of how Sasquatches survived The Flood.

Thanks for reading, Jazz Pickles. If you’ve been enjoying Bizarro online and not in newspapers, I would ask you to keep in mind that I don’t get paid for cartoons online, so please consider becoming a patron of my cartoons by making a one-time or tiny monthly donation by using the Tip Jar in the righthand margin of this blog. Or find the Tip Jar here! It will help keep me out of a highway toll booth.

And one more fun thing: a fine art gallery in LA is selling some of my favorite Bizarro gags as super-nice, framed, limited-edition, signed and numbered prints. Talk about a cool, unique gift for that special someone, who may even just be yourself. Check them out here!