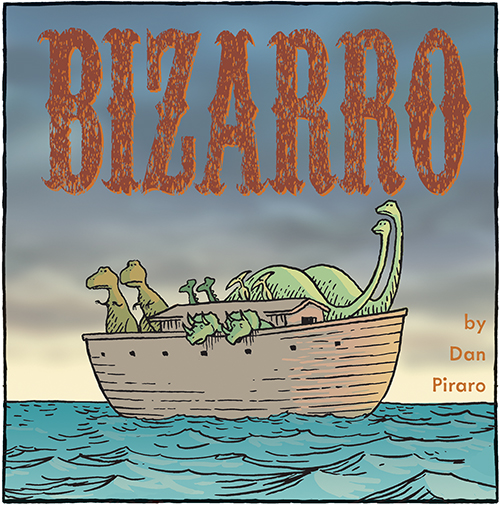 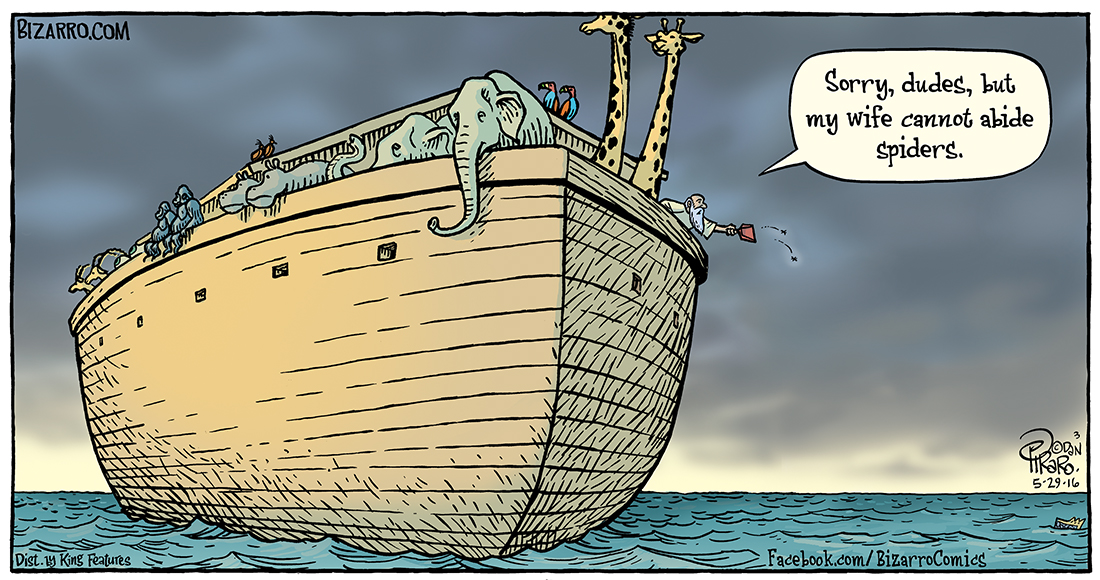 Bizarro is brought to you today by What We Do Now.

I’ve done a lot of Noah’s Ark cartoons and I think I’ve still got a few left in me. The same reason myths like these endure for centuries among the population is the reason they provide so much fodder for humor. These myths say something important about the human condition as we stumble through life on Earth.

The story of Noah’s Ark is in part about our desire to control our environment and our destiny. In my version above, Noah is controlling his environment in a small, seemingly insignificant way, by tossing out a couple of spiders. But while this seems small, it is enormous in an environmental sense. By destroying the last two spiders on earth, the delicate balance will be hopelessly thrown off center and cause who-knows-what-kind of chaos. As a species, we’ve done this kind of thing time and time again and it’s never good. I didn’t create this cartoon with that dour message in mind, it just occurred to me while I was writing about it this morning. (Also worth mentioning is that a friend of mine is a world-renowned spider expert and tells me that you should never kill spiders in your home or catch them and throw them outside. They aren’t interested in people and provide a valuable piece of your home’s ecosystem––mostly by eating other bugs that are after us!)

On a lighter note, here’s probably my favorite Noah’s Ark cartoon I’ve ever done. It’s one of the super-nice-high-quality-fine-art prints you can get from the LA art gallery that is offering them online here. Each one is signed and numbered by my own human hand on my own kitchen table while I use my other own hand to shoo away my own cat who wants to walk on them with her own feet. 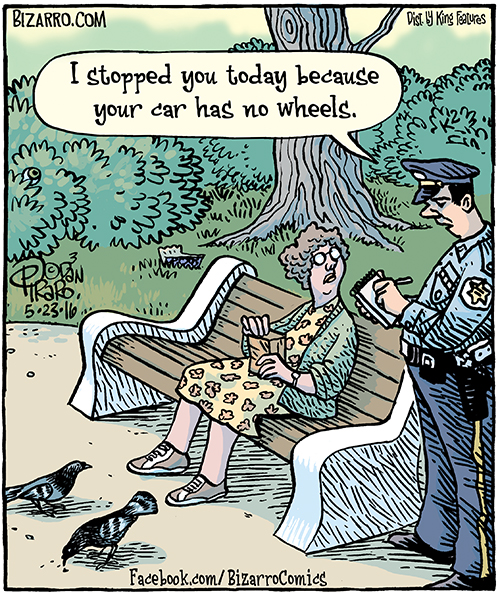 Here we have a cartoon that confused at least one reader who asked me what it meant. If you were similarly confused, it’s probably simpler than you think. The woman’s car has no wheels because it is not a car, it’s a park bench. 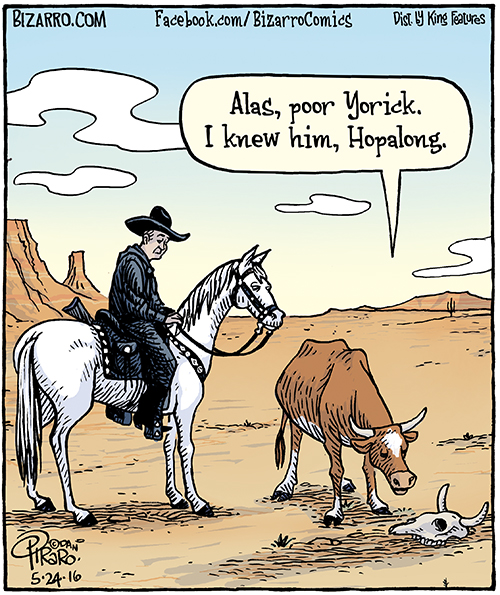 I got a couple of questions about this cowboy cartoon, too. If you are among the mystified, google this phrase: “Alas, poor Yorick. I knew him, Horatio.” Then google “Hopalong Cassidy.” Okay, you’re done. If you still don’t think it’s amusing, even in a vague, surreal kind of way, just move on to the next cartoon. 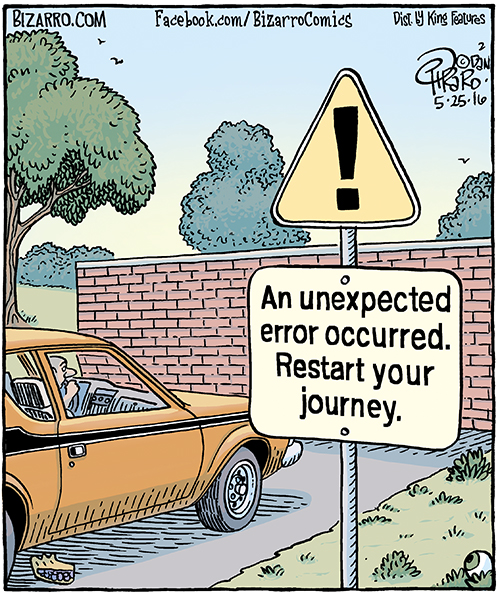 If you’ve ever had a computer freeze up on you and had to restart it and lost everything you’d done since you last saved, you have known utter despair. (The same might be true if you owned an AMC Gremlin, which is the sort of car I drew in this picture. I like vintage vehicles and drop them into my cartoons whenever I can. Especially goofy ones.) 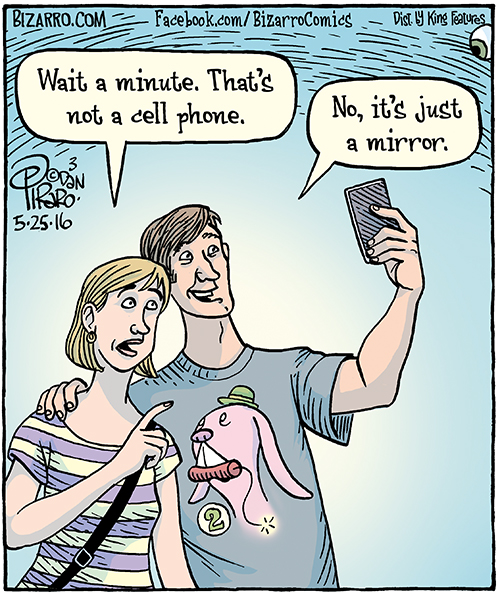 I think this is a fun cartoon about modern society’s narcissism. I say “modern,” but I honestly don’t know if the ubiquitous selfie is a sign that we are more egocentric than we used to be, or if it is just a visible expression of what we’ve always been. I remember back in the 80s when my children were small and I got my first video camera. It was the large, heavy kind, about the size and weight of a toolbox. (Yes, youngsters, the early days of technology were hell!) After a few years of video taping every moment of my children’s lives I realized I was experiencing important, one-of-a-kind events through a tiny eyepiece, instead of being present to the actual event. And I virtually never went back to watch the damn things. So I put the video camera away and found that life’s experiences were more meaningful if I viewed them with my own eyes, and my memories of them were better than a shaky video. Smartphones have only made this avoidance of being present to our surroundings even easier. I predict that one day, people will stop leaving their homes entirely and just live inside their tiny screens. Many have already begun. 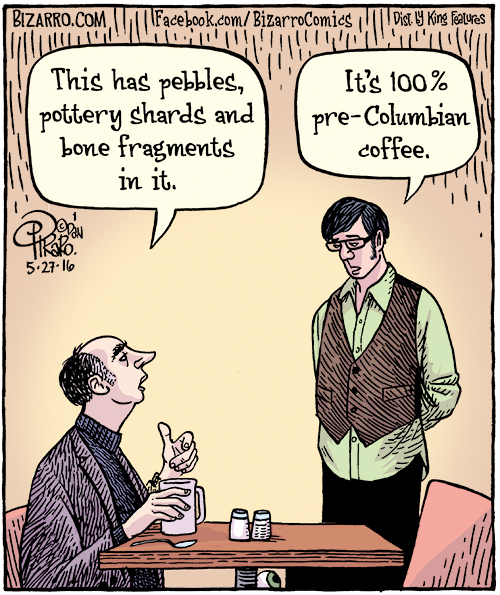 Yes, I got a couple of questions about this cartoon, too. This kind of humor is what attracts alternative thinkers to my work, and also what has kept me from getting rich. If you’re a regular fan of my work, you know that Bizarro isn’t for just every member of the herd. So congratulate yourself for being a Jazz Pickle.

I got this idea while making coffee one morning when I noticed the packaging said, “100% Columbian Coffee”. Then I thought of the archeological time period called “pre-Columbian”. Now that you know how it works, you can be a cartoonist, too. 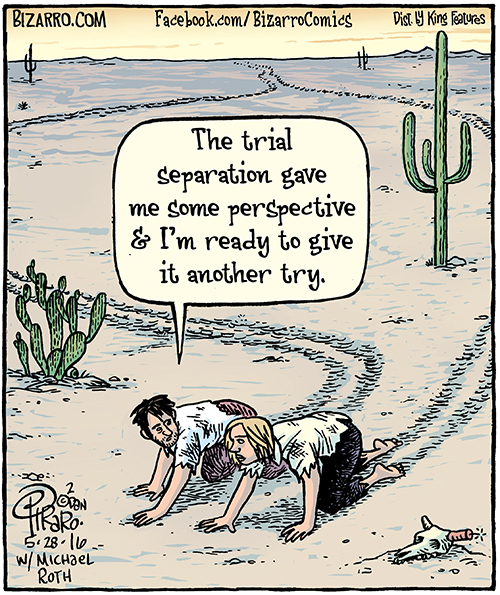 Finally today we visit this couple who find themselves in a common cartoon meme: crawling through a desert. A bit like Noah’s Ark, this meme is popular because it represents the struggles we all face while trying to make our way through life. It’s funny that these cartoons never feature people walking through a desert. I guess once you’ve lost your shoes, crawling is easier on the feet. This cartoon is a collaboration between myself and a writer in Hamburg, Germany named Michael Roth, who befriended me via the Interwebs a few years back. One day I hope to meet him in person, but I hope it isn’t as we crawl through a desert.

I deeply appreciate your readership, dear pickles. As fewer people subscribe to 3-dimensional newspapers and the industry shrinks, we cartoonists have to aim our creative energy at finding new ways to get paid for what we do. For those of you who’d like to help keep Bizarro going or just say “thanks for the chuckles,” I’ve installed a Tip Jar in the righthand margin of this blog. You can make a one-time donation, or scroll down to set up a small, monthly contribution. Anything is appreciated and none of it will be used to kill spiders.

P.S. My Tip Jar only works with PayPal, which I’ve found to be reliable, convenient, and trustworthy. But soon I’ll be opening an account with Patreon, which I believe will offer different payment methods.

P.P.S. Bizarro won an award last night and here’s an article from The Washington Post online about it!