A forgotten panel that began fifty years ago was Queenie by Phil Interlandi (1924-2002), one of the most popular magazine gag cartoonists ever.

His works appeared in most of the main general interest publications of the postwar era, including Esquire, Look, Mad, McCall’s, Parade, Saturday Evening Post and True. By far his most famous works were for Playboy, where he turned out many sexy gags for about twenty years. He became so associated with the genre, that it was an unlikely jump to syndicated newspaper cartooning. But in 1966, King Features tried him out, with a series that at the time would be considered perhaps not risqué, but maybe a bit more sophisticated than the usual panel-gag fare about kids and housewives. It debuted 11 April 1966.

Queenie was a big-business secretary. Her world centered around office work and dating. It was not a depiction of a claustrophobic collection of files and desks with a mob of white collar workers shuffling around like in “Office Hours.” Instead, readers saw Queenie spending most of her time was away from her typewriter. Lots of restaurant gags, going out on dates and vacations were seen.  If you’re familiar with Interlandi’s work, you’ll notice Queenie was one of his typical creations, very simple composition, her face is pretty much his standard pretty girl assembly, interchangeable with any other. He liked to give them buxom figures and tight clothes, and Queenie was no exception. Now this might have been fine for Playboy, but cautious editors objected, so a few weeks in, she was suddenly a lot less voluptuous. A crash diet, maybe.

Her adventures sometimes could be the same kind of gags that might appear in Playboy, toned down a bit, with situations like taking dictation while sitting in the boss’s lap or having him chasing her around the desk or exaggerated expressions of her blonde irresistibility. But nobody got rattled in 1966 – her panel was sometimes even featured on the women’s pages.

Interlandi liked to rely on standard panel gag situations, tried-and-true settings like the marriage proposal, the panhandler, the signboard-waving “doomsday” kook, the street corner peddler,  the psychiatrist with the gondola couch, etc.  He did have a fondness through the years for skiing gags. Toward the end of the series, the gags became less sexy, mainly bosses and secretary gags where Queenie would observe something quirky or confusing about him. After twenty years and one month, she retired on 10 May 1986. 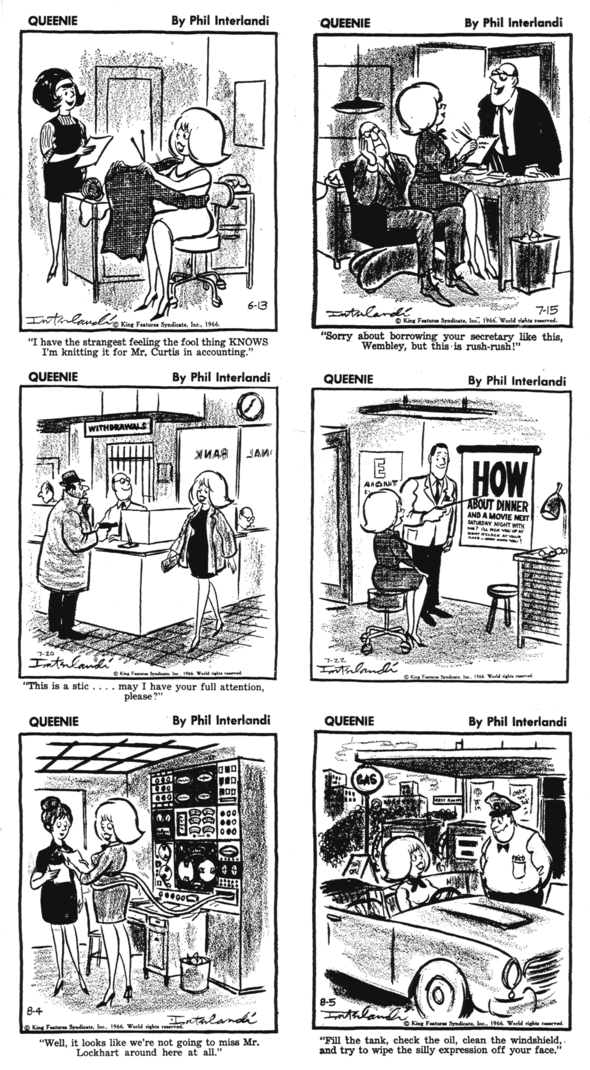 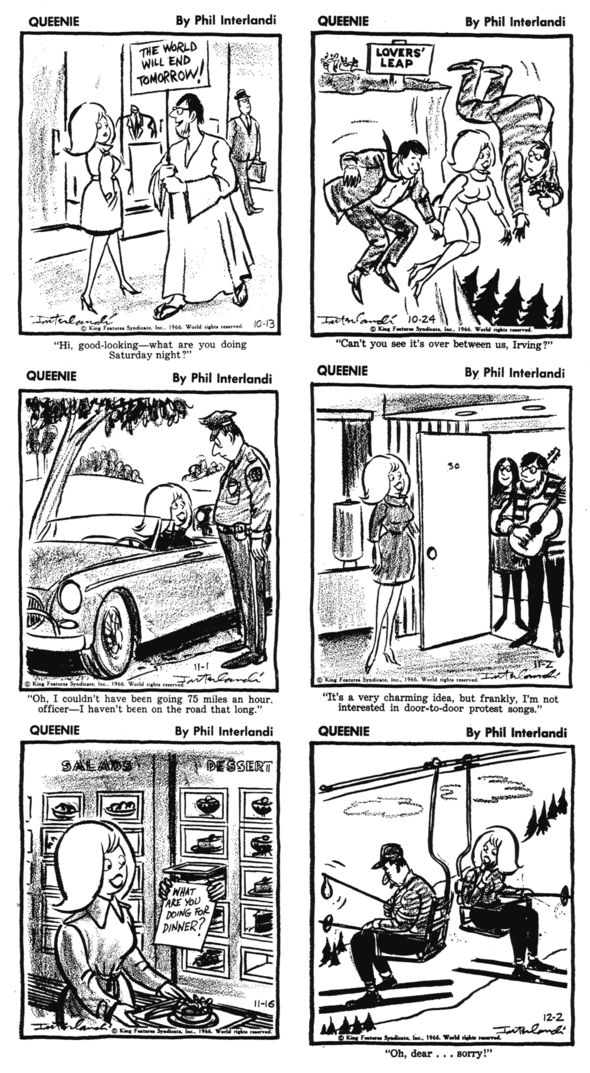 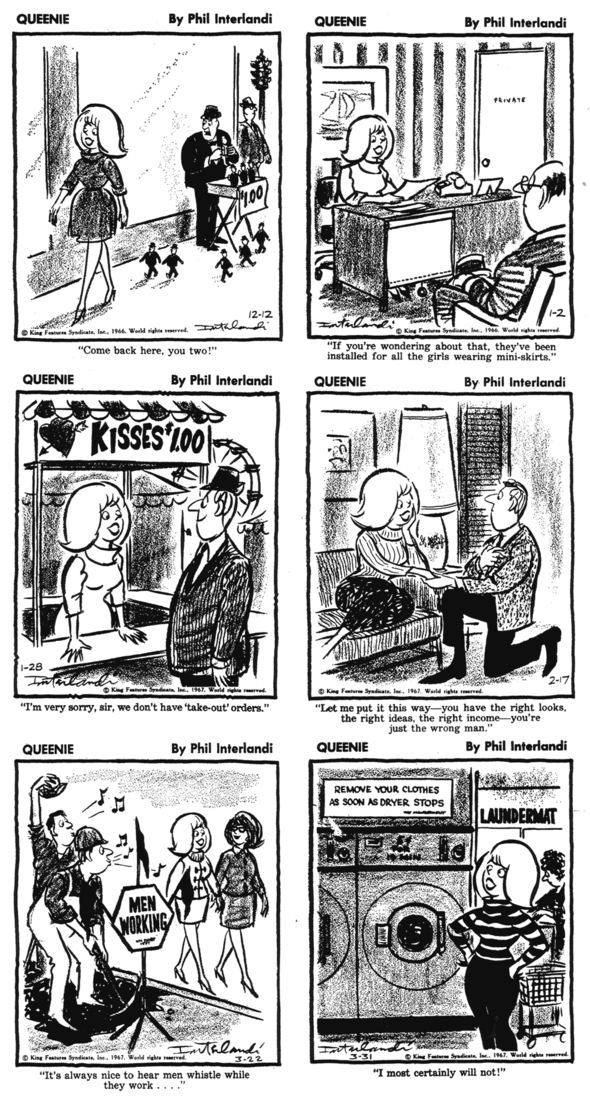 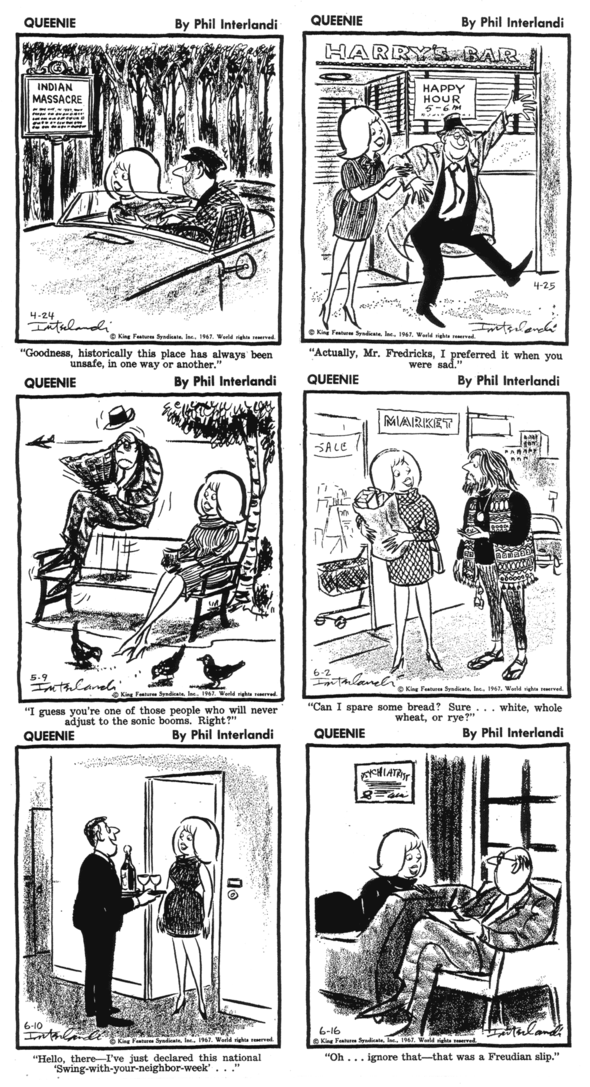 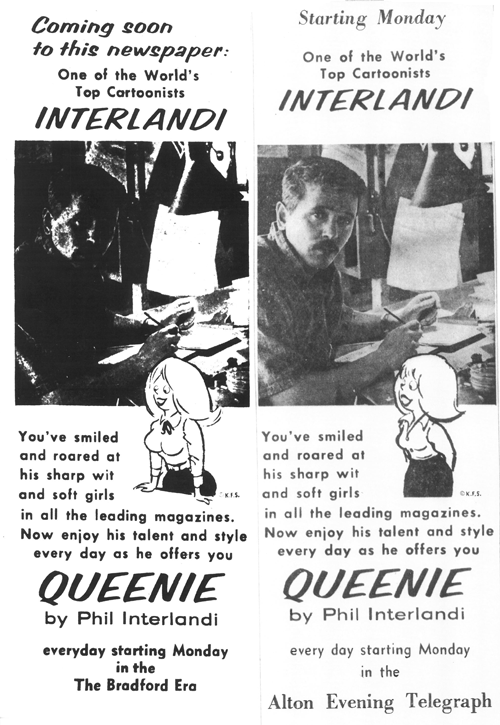 Queenie promotions: Two versions of the same ad showing Interlandi himself,
and the difference between the original version of Queenie and the “improved” one,
somewhat reduced in stature. (Excuse the dark microfilm source).

Thanks for enjoying the Ryatts. Maybe we’ll put them in the vintage section sometime in the future. As for the Brick Bradford and Rip Kirby files, they were only temporarily off line, and have been restored. We do appreciate your calling attention to problems. Sorry about the foul-ups, but glitches sometimes arise.

The only other “Doctor” cartoon of that time I can think of was Reamer Keller’s panel, which was sometimes called “Oh, Doctor”  or “Say Ah!” but more often “Medicare.” It ran from 1966-76 and started as an Adcox Syndicate item, but eventually went to Field.

And last, but certainly not least, an announcement you’ve all been waiting for:

The people spoke and we listened. My colleagues have been working behind the scenes and JUNGLE JIM will join our Vintage lineup starting THIS Sunday, May 29!
So be sure to ’Toon In!