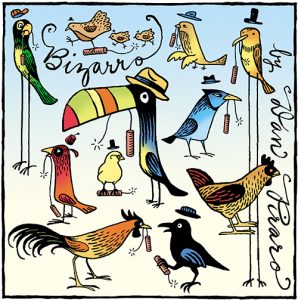 (A simple click of any illustration here will delightfully embiggenate it.)

Bizarro is brought to you today by Enduring Myths.

Today’s Sunday cartoon is a soft joke but one that made me smile. The mythical notion of humans just popping up in life as full-grown, modern adults and trying to negotiate the world around them is always amusing to me, but this is a wrinkle I’ve never thought of before. The utterly casual callousness of Adam and Eve as the quintessential “new parents” is devilishly delightful: “Sorry kid. We have no idea what we’re doing, and how could we?” I felt that way with my first daughter, who was born a full decade before I had any business being a parent.

I read an interesting article this week in The Washington Post about how little people care about the truth anymore. It was written in regards to how Trump makes things up on the fly, often contradicts himself within the same interview, ignores being shown wrong by fact checkers, and his followers don’t care in the least.  The theory is that because the Internet has barraged us with information from every angle at all times, perhaps most of which is far from true, that we have become desensitized and tend to believe that all sources of information are equal and if they disagree with what we want to believe, are lying.

People these days seem as likely to believe a highly partisan blogger working from his basement rec room as they are The New York Times. This matters because it opens the door to insanity in a remarkable way, and through that gaping chasm walk candidates like Donald Trump, who are demonstrably no more qualified to run a country than a thirteen-year-old schoolyard bully. (“Let’s elect Donny student council president and he’ll give the finger to the principal! Hahahahah!”) But the demonstrations of this are ignored by huge swaths of the public, no matter how many times it is shown that he simply does not know (or care) what he is talking about. Trump is not an anomaly, either. Fascists are gaining popularity in Europe now, too.

When I wrote that doctor cartoon above, I didn’t know it was about Trump, but I see now that it is. Some things are too important to trust to someone who claims they know what they’re doing but have no evidence or experience to back it up. 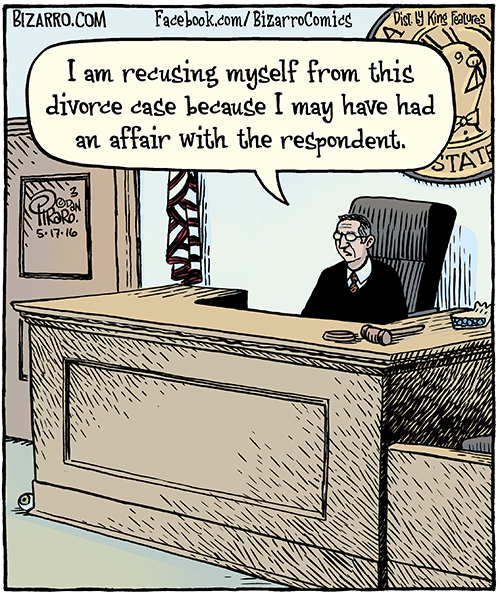 I’ve spent a fair amount of time in divorce court in my day, so the occasional divorce cartoon slithers out of the darker crevices of my brain. That’s all I’ll say about this cartoon, on advice from counsel.

Like many artists, I’m a big fan of the visual grandeur of Lucha Libre. I don’t care anything about the athletic competition, it’s the costumes that get me. 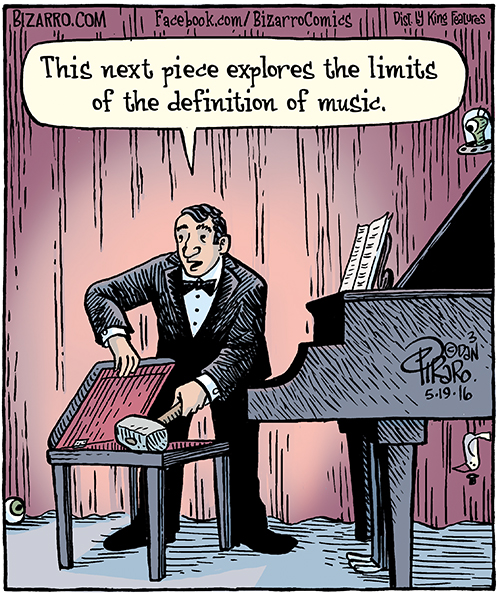 I live in a fairly quiet neighborhood in Pasadena, California, a few blocks from the mountains. After nearly ten years in the mindless and unceasing cacophony of Brooklyn, NY, I cherish the peace. But lately somebody on the street behind me has started playing the same goddam song over and over and over, from around 7:30am until well after dark. Because of the distance, all I can hear is the bass line, so I can’t tell what song it is but can tell it is the same one over and over. If you hear in the news that a prominent American cartoonist bludgeoned his neighbor to death then turned the hammer on himself, this will likely be why. Or, perhaps I didn’t kill anyone and the media will simply be lying because the corporations that own them like another cartoonist better. 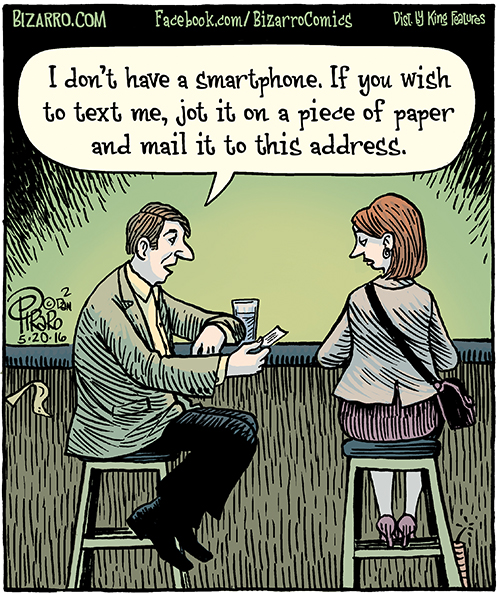 I like the convenience of texting but find myself annoyed by people who cannot pull their heads out of their smartphone screens long enough to participate in the actual world. Sometimes I want to abandon the entire world of technology and live in the woods. But that’s as far as my similarities with Ted Kaczynski go, I promise. 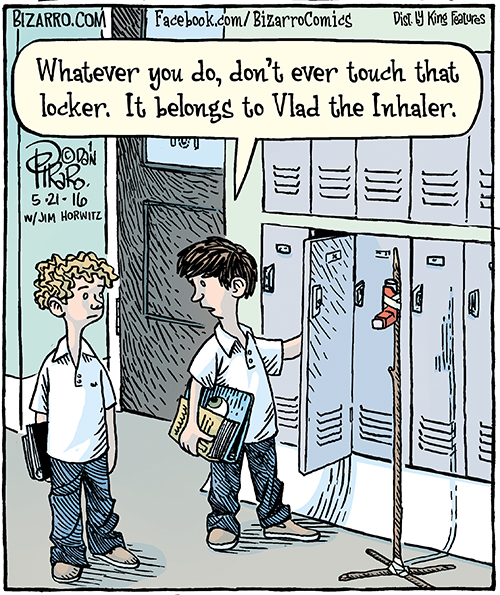 This joke has a story: A cartoonist colleague and buddy of mine, Jim Horwitz, suggested the pun “Vlad the Inhaler” to me and said I could use it for a cartoon if I liked. He had envisioned an older Vlad who “inhaled” from a bong, but that setup didn’t satisfy me somehow so I kept thinking about it. Eventually I arrived at the cartoon above and feel fairly good about it. For those who don’t get the pun or premise of an asthma inhaler on a stick, check out the historical Vlad here. For those interested in what kind of cartoons Mr. Horwitz does, have a look here.

If you enjoy my work and want to help me continue to do it indoors and on a relatively-full stomach, please consider making a one-time or monthly donation to the cause by clicking the bunny in the tip jar in the righthand margin of this page. All of us at Rancho Bizarro will be most appreciative!

If you want an awesome idea for a gift, check out my super-nice, archival, hoity-toity, limited-edition, signed and numbered prints of some of my favorite Bizarro gags here. A piece of your purchase will go toward ear plugs which I will use to attempt to block the repetitive bass lines I’m hearing from the next block and thus keep me from running afoul of the law.