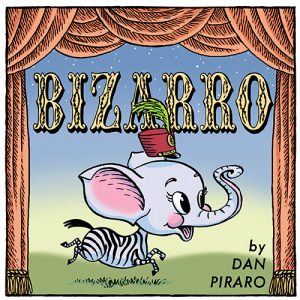 (To commence the embiggenation process, click any vowel on any image.)

Bizarro is brought to you today by Primitive North American Skeet Shooting.

I’ve confessed here before that I’m a bit of a grammar nazi. So I thought it might be fun to create some circus sideshow banners of people correctly using commonly misused phrases and words. The first one is an age-old pet peeve of mine. I’ve not done an in-depth study of it but I’d estimate that 95% of Americans say “I could care less” rather than the correct, “I couldn’t care less,” when they want to express indifference. Yes, people will know what you mean either way and that’s the main point of language, but it drives me a little bit nuts that “I could care less” means exactly the opposite of what you’re trying to say. I care about my mother (happy Mother’s Day, Mom!) and so it would be very possible for me to care less about her. It would not be possible for me to care more about her. On the other hand, if I care nothing at all about something, it would not be possible for me to care less because I already don’t care at all. And so, I “couldn’t” care less. Don’t think of it as a phrase, think of the literal meaning of the words you are saying.

The other two sideshow banners above are just common punctuation errors. Here’s a rhyme that will help you remember which is correct:

“You’re your reason for being vexed when it’s the wrong punctuation for its context.”

Okay, there are probably better rhymes for remembering that.

I was thinking about that thing people sometimes call a “perp walk” ––when a person accused of a crime doesn’t want to be seen on the news so they cover their heads with their jackets on the way into the courthouse––and was wondering what would happen if you tried that all by yourself, with no one accompanying you. You’d probably get arrested but it would be really funny.

The joke here is about how gigantic, long beards is now a fashion trend among young men. I believe they are sometimes called “lumbersexuals,” which I think is hilarious. I confess I’ve always loved outrageous beards and mustaches and have sported various types of my own for a long time. But still, a joke’s a joke, even if it’s on me. Of course, I’m not a young man anymore and my beard is mostly gray, so I guess I don’t fall into this category. I look less like a lumbersexual and more like a retired lumberjack. 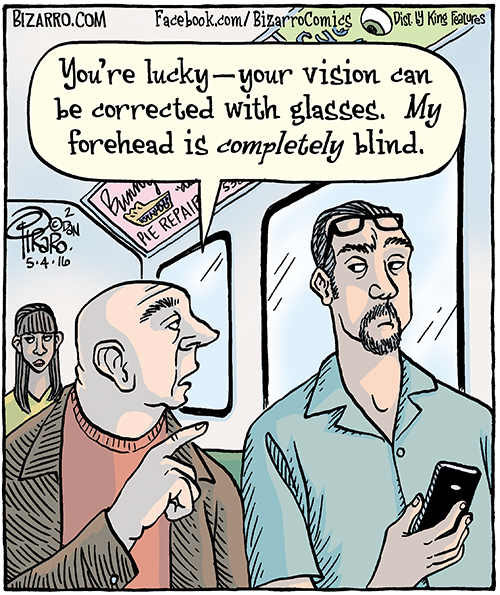 This gag about glasses is fun, I think. Since I was a child I’ve enjoyed coming up with alternative ways of viewing or saying things. I remember growing up in Oklahoma, where it gets HOT in the summer, and seeing my father leave for work in a suit and tie in August. I saw it as being required to wear a coat and scarf in the middle of summer and it seemed utterly ridiculous. On top of that, he did not work with the public; this was just a lot of people getting all dressed up to push papers around in an office together. I think I may have been born with an absurdity-spotting gene. 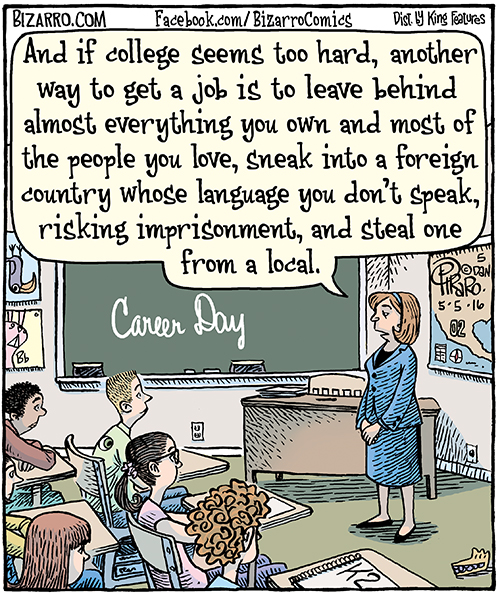 This week’s cartoons were not as controversial as ones from the last two weeks, but I got a few bits of hate mail about this one, accusing me of being one of the people I was attempting to skewer. That happens to satirists.

In fact, this cartoon was was my attempt to point out how incredibly dangerous sneaking into a country is and how very desperate you’d have to be to even try it. Charlatans and race-baiters like Trump like to shout that illegal immigrants are taking jobs from Americans and wreaking havoc on society, but the truth is actually the opposite. Here’s a smart person from Forbes’ website explaining that not only are they not stealing jobs from Americans, they improve local economies. Unscrupulous politicians and other people have been pointing fingers at the “others” (people of races, religions, lifestyles, ethnicities, or sexual orientations that are different from whatever mainstream they are attempting to persuade) for thousands of years and it works on a certain percentage of people every single time. Don’t buy into it. Be smarter than that. 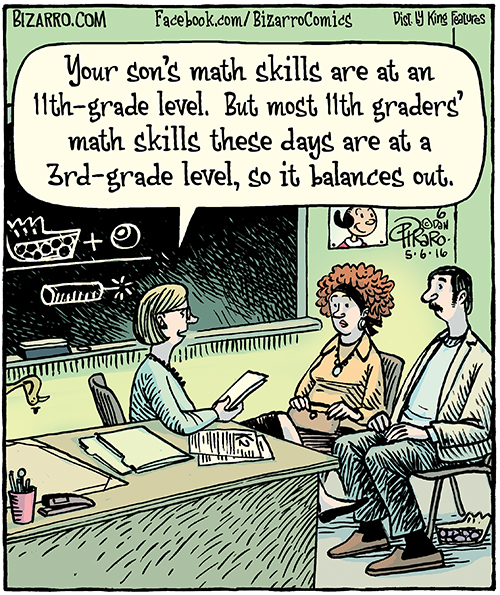 This joke about poor math skills isn’t based on anything I’ve read recently or anything, but I’m guessing there is probably some truth in it. Math was my worst subject, not so much because I couldn’t understand it but because it didn’t interest me. To a creative, artsy kid like me, math was like watching paint dry. I’m glad some people are into it, though, because apparently it is a very important and useful discipline that allows us to invent computers and stuff, which I’m using now to write this. I really don’t know much more about it than that.

This final gag is about a man who does not kill animals for fun and then display their mutilated bodies in his home, so he’s all right by me.

Hey, Jazz Pickles, here’s a new thing: I put a “Tip Jar” on this page in the form of a big, pink, hungry bunny in the right margin!  If you’re the kind of person who enjoys my cartoons online (for free!) and would like to show your appreciation, please consider tossing a piece of pie* into the bunny jar. If you click the bunny and scroll down, you can also schedule a monthly donation. Olive Oyl and I will be very appreciative and will think of you each day that we continue to live indoors!  THANKS!