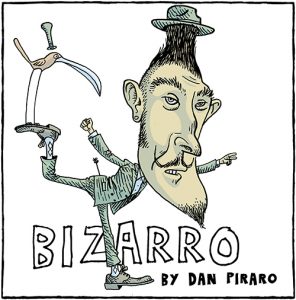 (A desire to embiggenate can be satisfied by clicking any of these cartoons.) 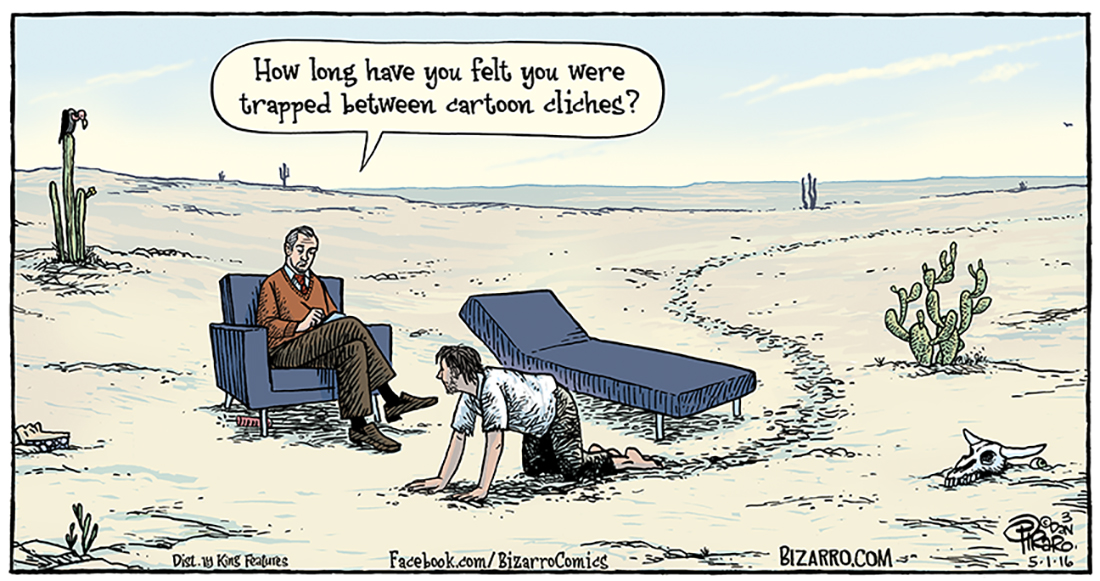 Bizarro is brought to you today by The Simpson’s Shout-Out to Jazz Pickles.

As I’ve said before on this blog, I enjoy doing cartoons within the canon of popular cartoon tropes like the desert island, the shrink’s couch, the man crawling through a desert, etc. Here I combine two of them and use another trope: the self-referential cartoon. Self-referential cartoons can be dangerous because if they’re too easy––a character simply noticing he is in a cartoon without anything more substantial to say about it––it can elicit a groan. I hope not too many people groaned at this one. I thought it was fun. 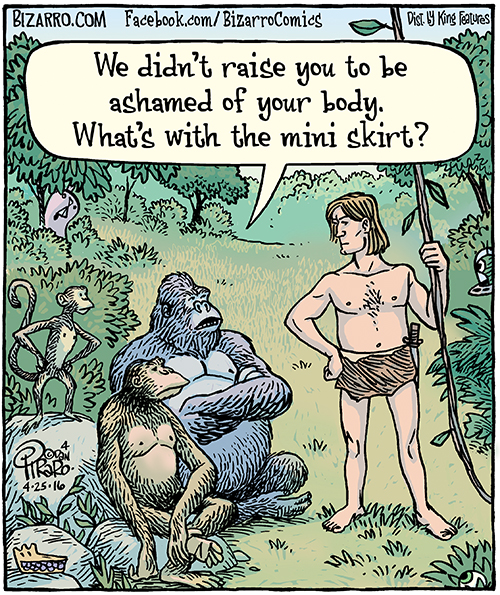 Tarzan was a pretty popular character in TV and film when I was a kid. I loved the weekly show starring Ron Ely, which aired from ’66 to ’68, and watched it religiously. But even though I was not yet ten years old, I wondered why he was so well-groomed and well-spoken. Many years later I learned that in the novels and stories by Edgar Rice Burroughs, Tarzan was raised in Africa by apes but traveled to England to be educated before returning to run around the jungle in a loincloth. That scenario still seriously stretches one’s belief, but at least it’s an attempt to explain why he was so gentrified. To the best of my recollection, most of the old movies and the 60s TV show never mentioned any of that. 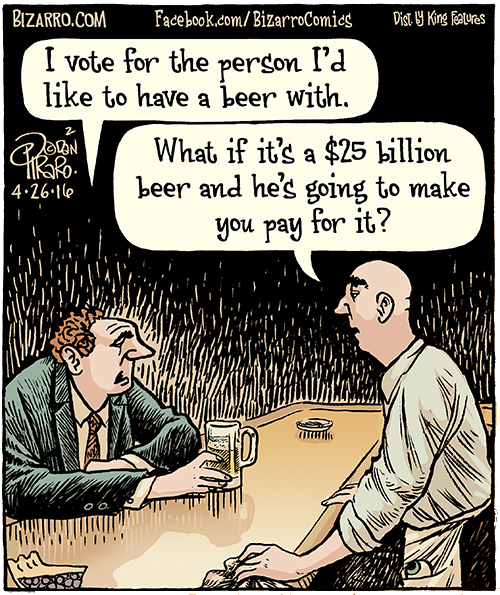 Yes, it’s another political cartoon. Sort of. I don’t do a lot of political cartoons because editorial and humor cartoons are sold separately, newspapers want to know which category you are in before they buy and publish your feature, and Bizarro is not sold as an editorial cartoon. But it’s fairly safe to do cartoons about Donald Trump no matter what kind of cartoon you have because he is––by his own design––more of a cartoon character than a politician. Anyone who will assure an audience at a nationally televised presidential candidate debate that his penis is plenty large enough not to be a cause for voter’s concern deserves a cartoon (or 2000) written about them.

This cartoon is also about the loathsome habit people have of voting for the person they “like” the most, regardless of their policies. If you were choosing someone to include in your carpool, that might be a good tactic, but being president of the most powerful country in the world is kind of more complex and important. If you needed a heart transplant, would you choose a surgeon based on their likability? George W. Bush was a president for whom a lot of people voted because they wanted to have a beer with him and we all know how that turned out. The world would have been better off if he’d just sat in a bar for 8 years having beers with people. 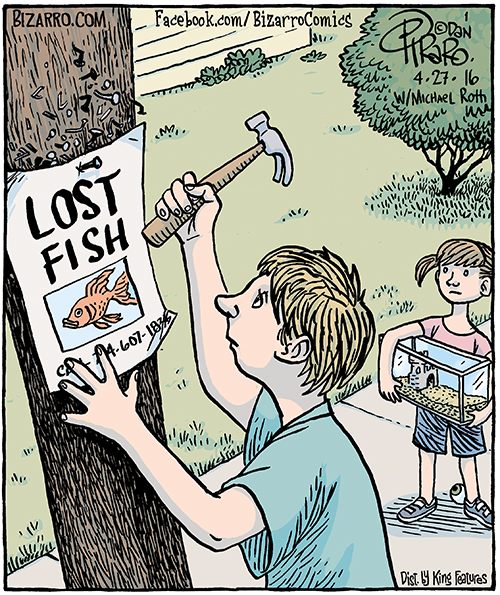 These poor children have lost their pet and are doing what people do when that happens. Chances are they’d have better luck if they flushed that flyer down the toilet. 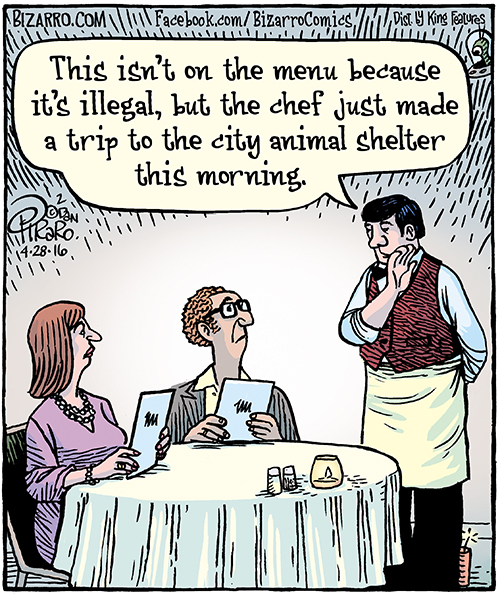 Okay, I know this restaurant gag is disturbing and wrong. I know because so many people wrote to me to tell me so. Most of those who wrote were the sort who work to save or better the lives of dogs and cats at local animal shelters; a truly admirable and important pursuit. To say they were angry about this cartoon would be like saying that Donald Trump is “a little prickly”. But read on; there are a couple of reasons I published this cartoon and neither of them is because I recommend the practice of eating former pets.

The first is that sometimes something can be funny simply because it is so wrong. It’s commonly called “dark humor” (or black humor) and is a time-honored technique for helping humans deal with the tragic and frightening realities of life on Earth. This is one of those cartoons that, for me, elicits a sort of nervous laughter. (If you laughed but it wasn’t because the inappropriateness made you nervous, you should probably be on some kind of a neighborhood watch list.)

The second reason behind this gag is that while I’ve never enjoyed having my own blindspots challenged, I often later really appreciate the new perspective it sometimes gives me. As a cartoonist, I enjoy pointing out inconsistencies in our behavior and belief systems as individuals or a society.  Specifically in this case, I’ve long thought it was interesting that most of us revere dogs and cats and are horrified by their mistreatment, but never give a second thought to what so-called “food animals” go through. Shocking people with something disturbing like this cartoon can sometimes cause them to rethink things they’d long ago filed away in their brains as resolved.

So, if you’re an animal rights activist who is horrified by this cartoon, I understand your anger but consider how many people it may have caused to think about something they don’t normally care anything about. Also consider that this is only a drawing and no actual animals were injured in its creation. 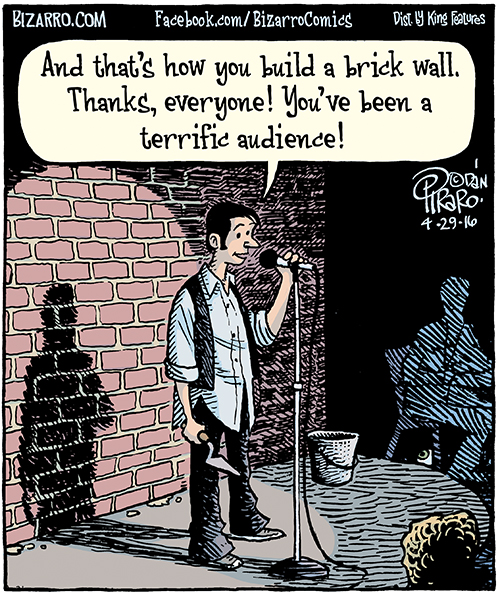 I’ve done a bit of stand-up at comedy clubs around the country over the years and it is amazing how many of them have brick walls behind the stage. I think The Improv started that trend but don’t quote me. 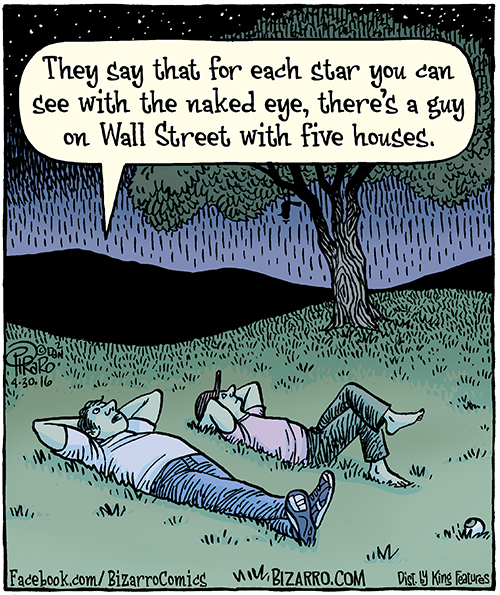 This cartoon isn’t political, per se, but it was inspired by the kind of campaign Bernie Sanders has been running. He regularly calls attention to income disparity in the U.S. and though I’m not a dedicated Sanders supporter, I am annoyed that rich crooks like the sort that caused the financial meltdown in 2008 virtually never go to jail. They casually destroy hundreds of thousands of lives with a few clicks of a computer keyboard and pay no price other than to make slightly less obscene amounts of money for a short period. I like the fact that Sanders is keeping that kind of topic on the table this election season.

That wraps it up for this week, Jazz Pickles. Remain awesome.