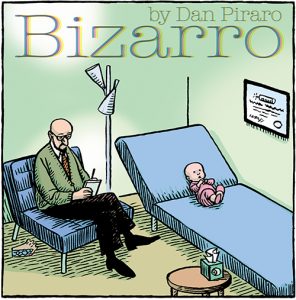 (To embiggenate any cartoon, hold down your breakfast and click any yellowish color thrice.) 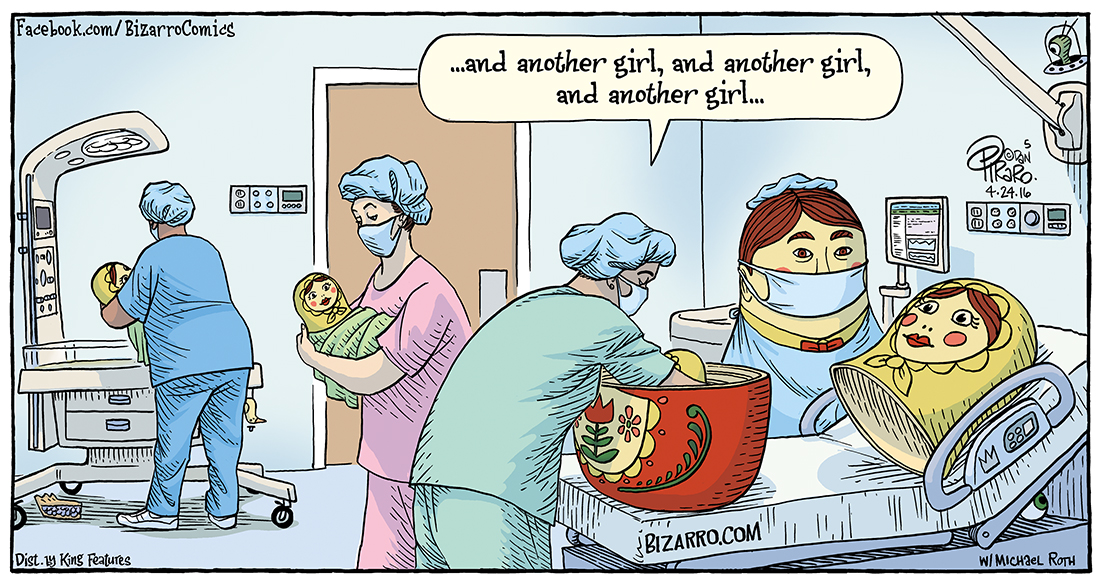 Bizarro is brought to you today by My Favorite Click Bait of the Week.

If you’re a person who is uncomfortable being honest about sex with your children, this cartoon is an excellent way to teach them about reproduction. It’s a bit more accurate than the old “stork” story, and in a court of law you could argue that it is technically true; babies come from inside the mother. Of course, if you do use this as a teaching tool for your children, prepare to be raising your grandchildren in a few years because their parents are still in middle school. 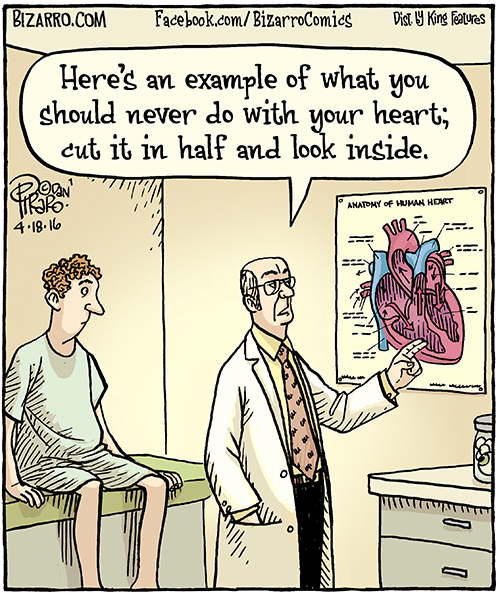 Doctors are full of good advice like this. Other good doctor advice: never get this naked. 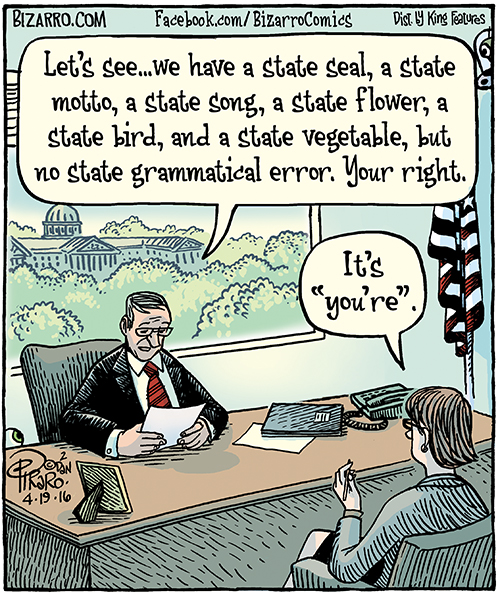 Here’s a lovely little cartoon for all my fellow “grammar nazis” out there. I actually hate being someone who has strong urges to correct people’s grammar, and so does everyone else who doesn’t share this compulsion. I’ve become good at not correcting people in social situations but as my domesticated partner, Olive Oyl, can attest, I’m not always good about resisting the urge at home. I honestly don’t know if it is genetic or learned behavior from having attended Catholic school, where they convinced me that if I could not speak and write well, others would think I was a moron.

I should mention that Olive Oyl writes and speaks very well and gives me precious little opportunity to correct her. That’s a prerequisite for me. Poor grammar and/or the inability to write a well email is a huge turnoff for me. I even pay attention to punctuation and capitalization when texting. Yes, I’m that far gone.

I should also mention that while my skills in this area are far superior to most people’s these days (which isn’t saying much) I am far from infallible and have been corrected many times by readers of this blog. Witch I appreciate because I hate to have eras in these posts. 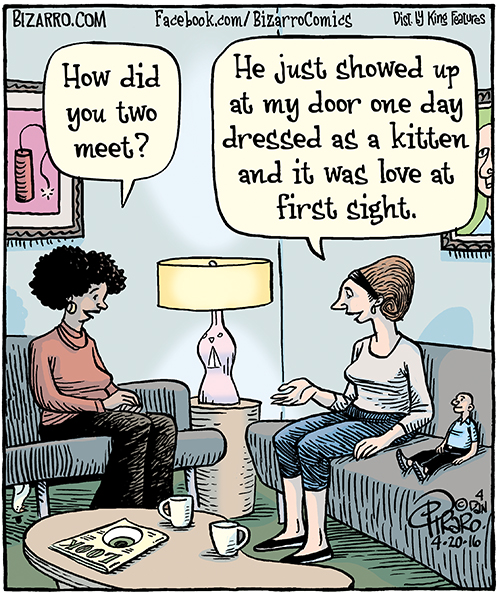 I have no idea where this weird little scenario above came from. I was thinking about what they call in the movie industry “meet cutes,” and then I thought about how women love kittens and there I was. Here’s another favorite cartoon of mine about a similar couple. 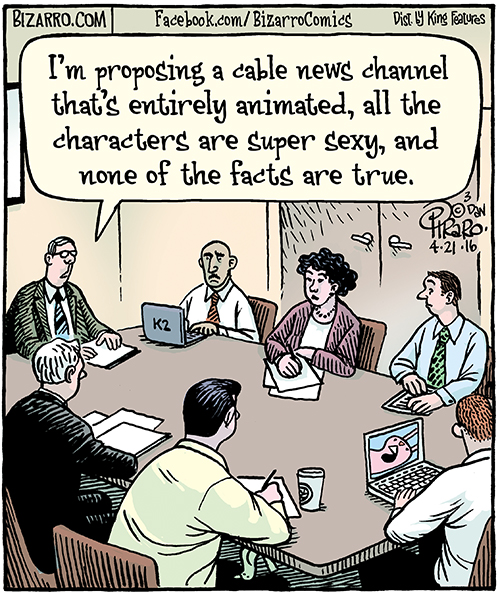 I like this cartoon because it bothers me how many Americans think that all media is biased. All media has some bias in it because humans are nearly incapable of operating without it, but some media prides itself on accuracy and openly identifies opinions and editorials as such, rather than disguising them as factual stories. That’s not to say they aren’t sometimes wrong, but when they are, it is truly inadvertent and corrections are made. Their business is built entirely on accuracy. A few examples of this kind of trustworthy news source are The New York Times, The Washington Post, and NPR.

The biggest example of a media outlet that knowingly misleads the public in an attempt to achieve the political goals of its owners and operatives is FOX News Channel. Their business is not built on being trustworthy, but on convincing their viewers that they are being lied to by everyone else. That’s an enormous and important difference. From inside that bubble, it can seem you’ve stumbled upon the only news source that’s really telling you the truth. But it bears noting that it would take a worldwide conspiracy of impossible proportions for FOX’s claims to be even close to true. It’s The Emperor’s New Clothes.

This cartoon also addresses the fact that as our attention spans get shorter, TV news necessarily has to pander to us in childish ways to compete in the ratings. I have no doubt that a news channel like the one described above would become extremely popular.

And, in grammar news, it should correctly read “…none of the facts is true” but since it’s a character talking, I can get away with using the common vernacular. (Take that, grammar nazis!) 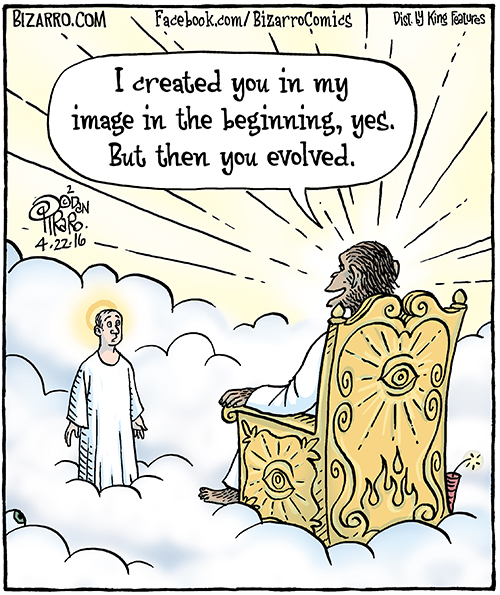 This cartoon about the traditional Judeo-Christian god got a lot of comments this week. The vast majority were very positive but, predictably, some were negative. The negative comments were mostly from people who found it offensive to depict god as an ape. (I am amused by the fact that humans are also apes, and nobody complains when you depict god as one of those. Also that so many people envision god as a male. Why would god need genitals?)

I was raised in a devout Catholic family and attended six years of Catholic school. I later spent a few years as a “born again” Christian and did the whole fundamentalist Bible study thing. Neither of these disciplines held up to my standards of “truth.”  But because I was raised to take religion seriously, I kept searching for answers.

As a young adult I did a lot of reading about a wide variety of religions from around the world and throughout history, as well as various mythologies. I’ve also studied the Bible both academically and as a believer. All of this exposure to the ways humans express their notions of the divine gave me a perspective that confining oneself within a single culture does not. Eventually I began to form my own conclusions and was finally able to regard any and all human religions as mythologies we’ve created to explain or comfort ourselves in a very complex universe. That’s not to say those comforts are not needed or are necessarily a bad thing. We all gotta do what we gotta do to get by.

But a few things jump out at you pretty quickly once you step outside of whatever cultural bubble you were raised in: Who wrote that god looks like a human male? Human males. Who wrote that Jews are god’s chosen people? Jews. Who wrote that women are to be subservient to men? Men. Who wrote that anyone who disrespects Islam should be severely punished? Etc. The list goes on and on.

My current perspective could be called atheist, but it does not rule out some kind of incomprehensible unifying force in the universe. It does, however, most certainly rule out the possibility of any one man-made religion being even remotely “true” in the sense that so many of us believe it is. It also rules out any possibility that a divine, omnipotent power in our incomprehensibly infinite universe looks like a human male. Or that such an incomprehensibly powerful entity could be insecure enough to be offended by my miserable little cartoon depicting it as the wrong species of ape.

I would also say that since humor is one of the most pleasurable, powerful, and beneficial forces in human life, it is impossible to believe that if there is a God, He/She/It was not responsible for creating it.

This cartoon grew from the controversy surrounding the Oscars earlier this year. It was posited that mainstream Hollywood films do not offer enough good roles for people who do not happen to be mostly Caucasian. I don’t pay close enough attention to the industry to have an opinion on that, but I would definitely be interested in the film mentioned in this cartoon.

Well, Jazz Pickles, I’m off for another week of cartoon-making. Since so many people read my cartoons online now (for free) instead of in newspapers (which is who pays me) it becomes increasingly difficult for guys like me to make a living. So we sell things. Here’s some stuff I’m selling now that help to bridge gaps and provide me with an uninterrupted stream of tequila, chips, and salsa. Thanks for your support!

Very nice, signed prints of one of my strange sketchbook images, soon to be a page of a book coming out this fall. $25 to $50 There are less than 20 of each of these sizes so you could call it a limited edition. Have a look!