(In the mood for embiggenation? Click any cartoon to begin.)

Bizarro is brought to you today by Trombone Secrets.

The mystery of The Great Sphinx is a great mystery. Nobody knows how that giant stone cat with a man’s head got onto that tiny island in the Pacific, or what happened to the people who built it. Were they decimated by disease or famine? Did a rival tribe from another island kill them off? Did they kill each other off in a civil war? And why do they call wars like that “civil”? I don’t think there’s anything civil about killing people. And lastly on the list of mysteries surrounding this big statue is that the kind of stone that The Great Sphinx is carved out of doesn’t even exist on that island! How did it get there?!

Actually, I may be thinking of the heads on Easter Island. The Great Sphinx is in Egypt, which is not an island unless you consider the continent of Africa to be an island. Which many American highschool students do, if the results of standardized testing are to be believed. But there are probably mysteries surrounding The Great Sphinx in Egypt, too. I hope that at least one of those mysteries can be solved by my suggestion in this cartoon. 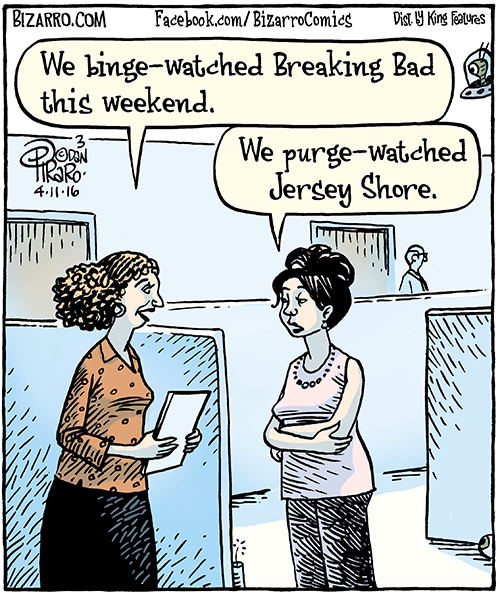 If binge-watching is viewing many episodes of a beloved series in a row, like Breaking Bad, then what is purge-watching? I suspect it is somehow getting rid of a terrible series that you’ve watched, perhaps accidentally while at someone else’s house, or perhaps unable to look away, like a collision involving a train full of ketchup and a truck full of mannequins. I once watched around four minutes of an episode of Jersey Shore just to see what the fuss was all about, and I’ve been wanting to purge the memory ever since. If any of you Jazz Pickles know how I might be able to achieve that, please give forth. 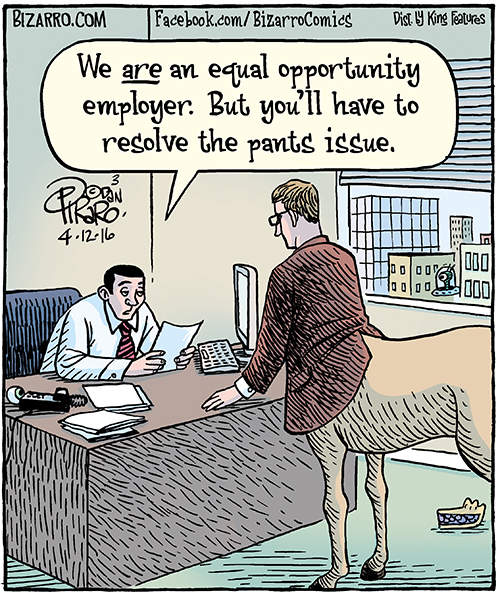 I enjoy the occasional centaur gag. Here’s one I did a few years back. And here’s maybe my favorite gag about mythological animals. For me, that last one is still laughoutloud funny. 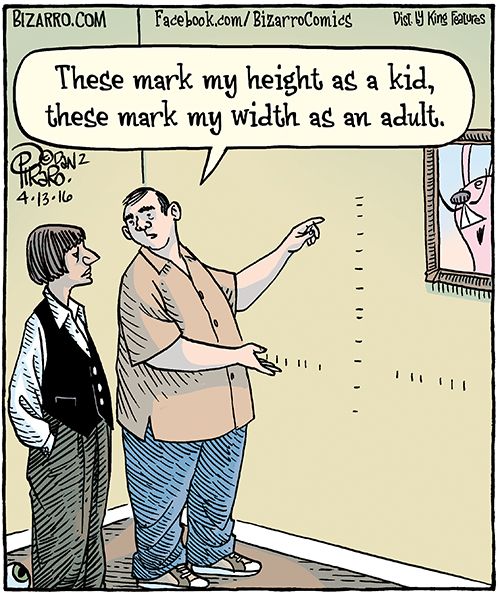 The thing I want to say about the above cartoon is not about the joke but about the character at the far left. Is it a chick or a dude? Young or middle aged? I don’t really know. It is an odd, ageless, androgynous character that just came out of my pen and I liked it so I kept it. 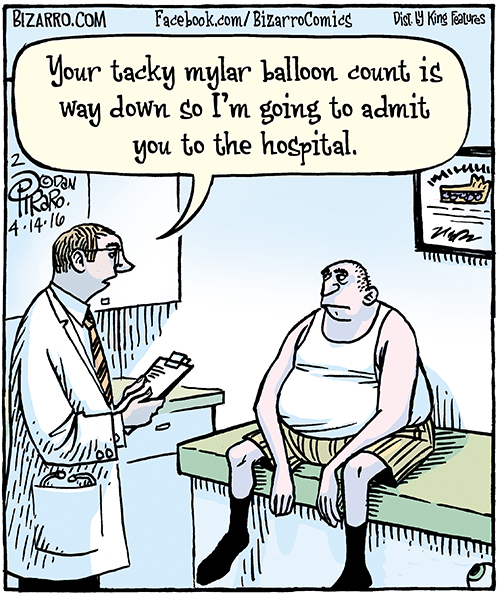 A couple of readers asked me what this mylar balloon cartoon means. Perhaps they were from outside the U.S. and perhaps in their country people don’t give mylar balloons to people in the hospital, but here in America, it’s pretty common. So that’s what this joke is about. (Note: If you visit me in the hospital, please do not bring me mylar balloons. They depress me for reasons as mysterious as how that gift shop near The Great Sphinx got there.) 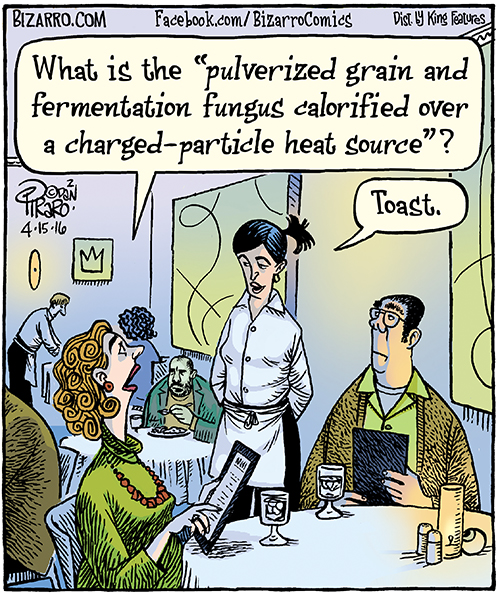 Here’s a fun bit of wordplay that comments on the pretentiousness of some restaurants. “Pulverized grain” is flour, “fermentation fungus” is yeast, to “calorify” is to heat, and a “charged-particle heat source” is an electric toaster. 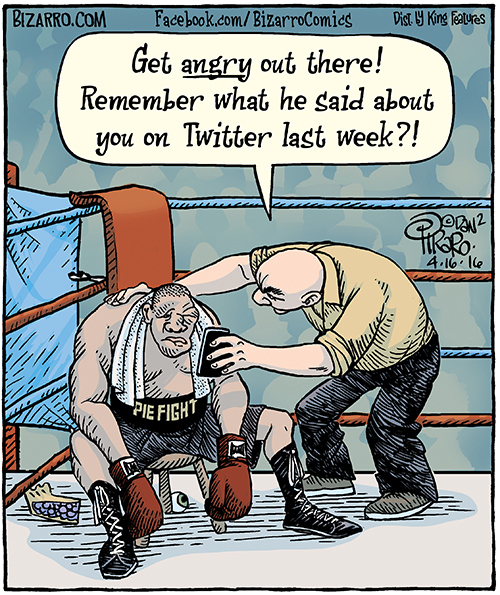 Unlike most artsy types, I’m also a sports fan. I never watch or read sports interviews because they are all the same and no one ever says anything interesting or surprising. I mean ever. But ignoring that field of journalism also helps me to ignore the fact that a disproportionate amount of pro athletes are immature idiots. Not all of them, just more than you might find in another profession, like, say, journalism, which is a field charged with reporting the immature, idiotic things pro athletes say on Twitter. I can’t imagine having to cover that kind of news. It would make my head explode. To me, sports is a form of mindless entertainment and I don’t care any more about what athletes have to say in their free time than I do what my favorite actors have to say about their grocery shopping experience. Yes, I realize I am in the minority. If most people didn’t care about the random, mundane thoughts of “celebrities,” things like Twitter would not exist. I come by this genetically, perhaps. As I’m writing this I suddenly remember that when I was a small child my grandfather used to complain that he could not understand how anyone could be interested in the stupid things celebrities said on The Tonight Show.

Hey, Jazz Pickles! Making a living as an artist in the 21st century isn’t as easy as I make it look. If you read my cartoons online, you’re enjoying my entire career for free, for instance. One way I continue my habit of eating daily and living indoors is side projects like this one: An LA art gallery is offering limited-edition, super-high-quality prints of a small list of my favorite Bizarro cartoons. What a cool, unique gift for that special someone you’re trying to impress for sexual, commercial, or mystical reasons. Get your smelly hands on them here!