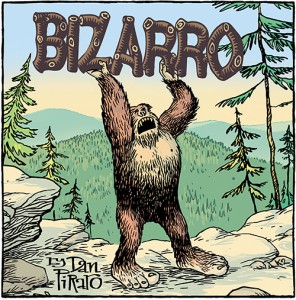 (For greater embiggenation, click any kind of fur in any image.) 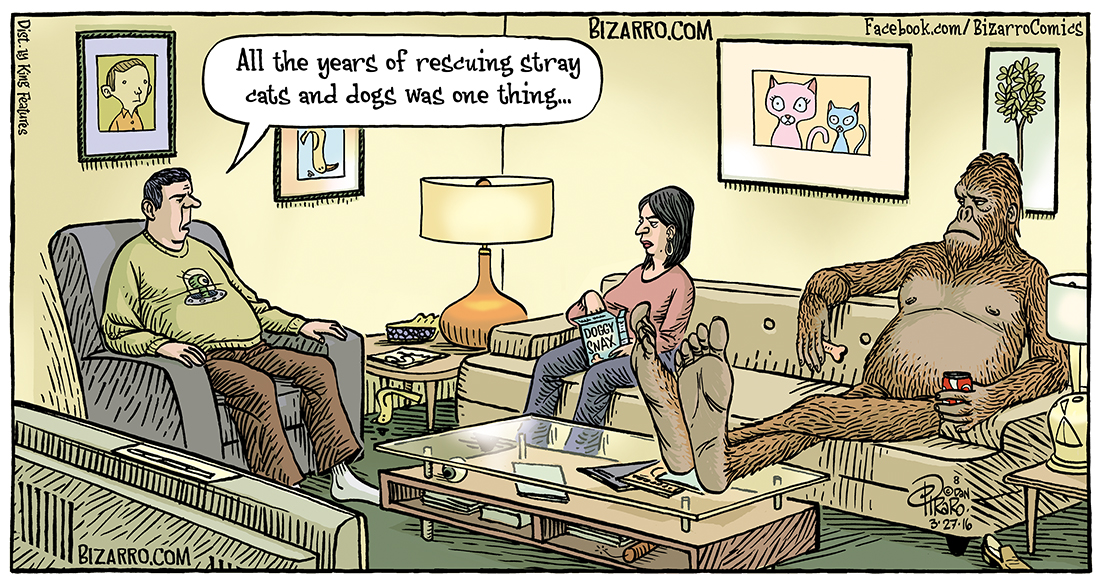 Bizarro is brought to you today by When Animals Think We’re Not Looking.

If you’ve ever lived with a person who habitually rescues animals, you get this cartoon. I think most people are compassionate to non-human animals but we each have our limits as to how much of our personal space and attention we’re willing to give to them. I used to hang out with a lot of animal rights activists (and lived with one for a while) whose homes were more like the petting zoo tent at the State Fair than what I would call a suitable human domicile. I have no doubt whatsoever that some of them would take in Bigfoot if the opportunity presented itself. No question. And they’d argue that BF was safer and happier as a prisoner of their small apartment than he would be in the wild.

My favorite aspect of this cartoon is the arrogant defiance in Bigfoot’s face and body language. I feel like I’ve seen that look from animals that my former roommate was fostering. And they weren’t all dogs and cats, believe me.

Sidenote: The title panel above was crafted from an old cartoon about Bigfoot that is my favorite of many I’ve done on the subject. See it here. 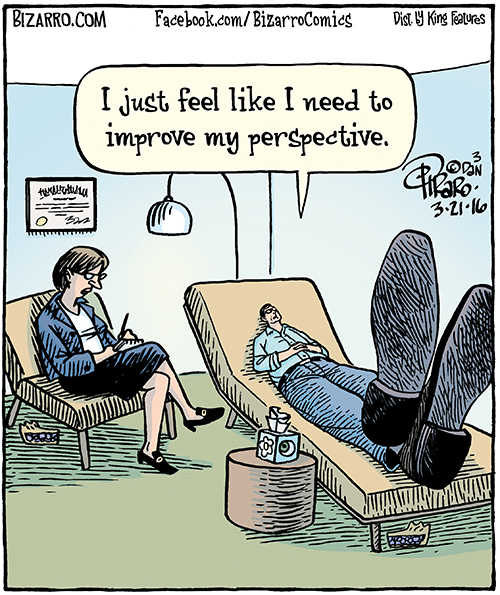 Some may think this gag is corny but I love it. I like puns (though not all of them) and this is a visual pun which makes me smile. I can’t remember where now, but this cartoon was posted somewhere on the Interwebs and someone left this comment: “Seems forced.” For a split second I was a little hurt by the insult, but then I realized the brilliance of it and laughed; “forced perspective” is an art term for the way this man is drawn. Whoever left that comment, thanks for the laugh! 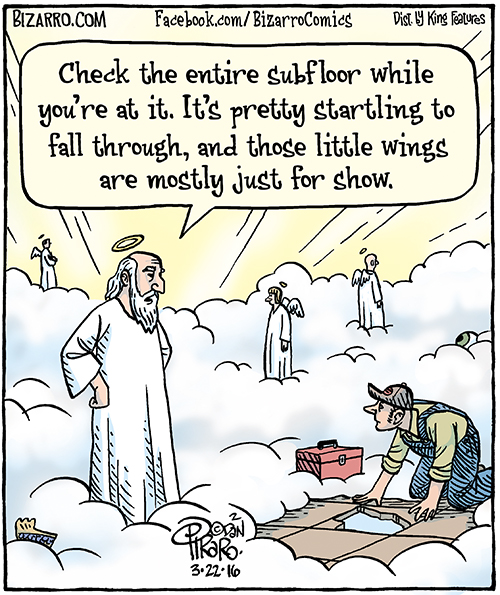 I like doing cartoons about the mythological version of heaven that we’ve all seen a million times. In this one, the ability to stand on clouds is explained. I have to wonder, though, if the repairman was already in heaven and just changed his clothes to repair the floor, or if god killed him just for this purpose.

As long as we’re on the topic, today is Easter which is one of the most peculiar holidays, in my opinion. A guy was tortured to death by his local government and came back from the dead to prove it could be done, and we celebrate it by looking for decorative eggs left by a giant, magic rabbit. Sure, makes perfect sense.

(P.S. I know all the theological reasoning behind the death/resurrection thing, and the historical reasons for the rabbit and eggs thing, so no need to leave detailed comments about that unless you just really want to. I still think it is peculiar and funny.) 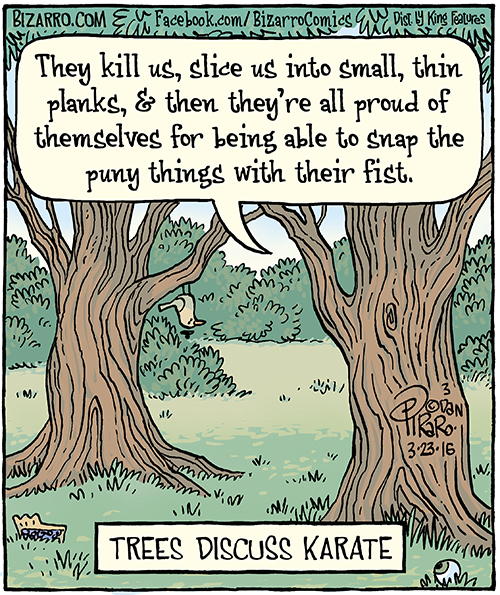 I suspect that those who practice the pajama arts would be quick to point out that breaking things in half with kicks and punches is not the real point of this ancient discipline, but it’s a well-known activity we’ve all seen somewhere and that’s what humor is often based on. When one considers the enormous strength of a large tree, it is a little silly to be proud that you can break a relatively tiny, thin piece of it with a body part. Everything is relative. 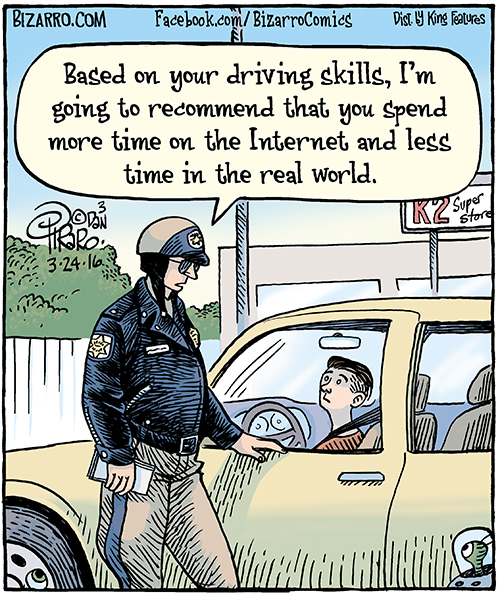 It came to my attention recently that modern American teenagers are not getting their driver’s licenses until they are much older, like around twenty or so. In my day (the late 1900s) it was typical to take the test on your 16th birthday or as soon after as could be managed. Kids these days live on the Internet, though, so leaving the house isn’t a big priority. It is said that teenagers’ brains are not finished developing and this causes them to be poor drivers, so one obvious benefit is that we’re all safer without them on the roads. But perhaps this is also how we will eventually solve the problems of increasing traffic and pollution; everyone will just stay home and experience the world through little screens. If you’re the sort who pays attention to your phone while you’re driving (in my estimate, 90% of everyone on the road) we’re all better off if you stay home anyway. 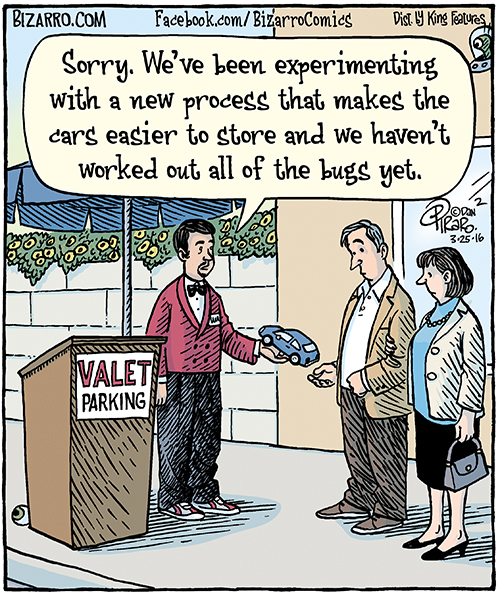 I use valet parking now and again, like most people, but it has always struck me how willing we are to hand the keys to a car that cost tens of thousands of dollars to a complete stranger to just drive off in. He may drive to Mexico in it and begin a new life, he may have the flu and sneeze dangerous germs all over your steering wheel, he may pick up drug addicts who may overdose and die in your back seat, or he may park it safely somewhere and give it back to you when you ask. Not great odds. 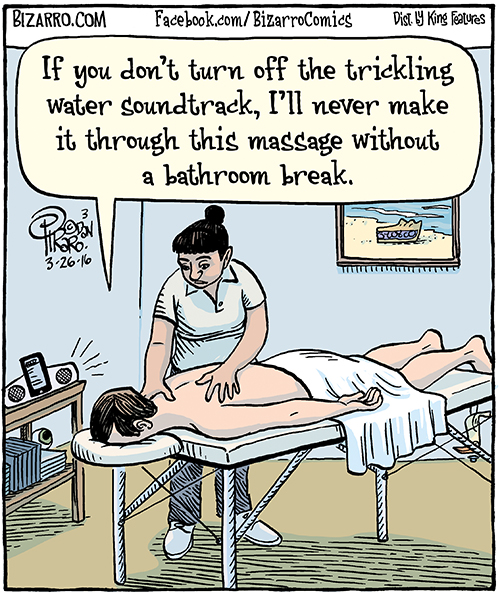 Lately I’ve been getting a massage every few weeks and the rubber-person plays those hippie-dippy tapes of nature sounds and stringed instruments from exotic lands––the sort that make me wonder if I’m about to have a sit-com flashback. One such tape had a lot of babbling brook water sounds in the background and I found it highly suggestive. A reader told me that he used to have the same problem with the trickling spit sink at his dentist’s office. That’s never been a problem for me because dental work always makes me lose control of my bladder and bowels, whether I can hear trickling water or not.

My latest limited-edition cartoon T-shirt will be for sale only until tomorrow afternoon, Monday, March 28, 2016. Grab one now before you can’t grab one later. I use the money from these sales to continue living indoors. Thanks, Jazz Pickles!