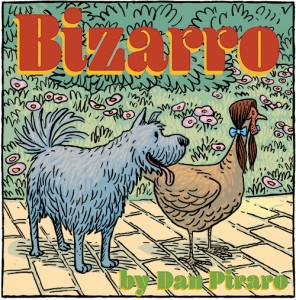 (For a more embigginated experience, click any redish color in any cartoon.) 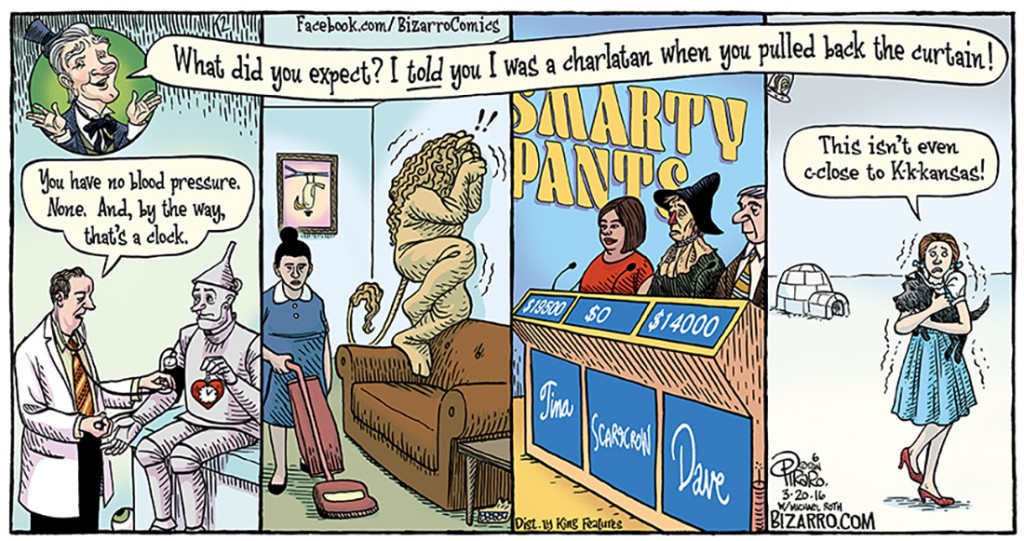 Bizarro is brought to you today by Walk This Way.

My cartoon today is about the disappointment one feels when they trust someone to fix things and that person turns out to be a charlatan. We’ve all experienced this with politicians and one can read that message as the subtext to the Wizard of Oz: The man at the top, the Great Wizard of Oz, is just a regular guy pulling switches and levers to make himself seem more powerful than he really is. A person can also easily see this as an allegory of Donald Trump’s current campaign.

Some of my readers hate it when I get political and I understand that, but the current presidential campaign is so remarkable that I can’t resist. Part of what humorists do, and cartoonists in particular, is comment on current events and society. Trump is remarkable not only because of his unorthodox style of campaigning––proudly using vulgarisms, insults, racism, xenophobia, and threats of violence –– but also because the mainstream of his own party doesn’t want him as their nominee. They know that his policies fall under two categories––unfeasible and dangerous––and more importantly that Trump himself knows that. Trump knows that immigrants are not negatively affecting crime or the economy, that all media outlets (other than FOX News) are not lying about everything, that terrorism is not much of a threat to the average American and that it cannot be defeated with a bigger military, and that America is not failing internationally and in need of being made “great again”. But he also knows that there are people who do believe those things and that if he shouts these things into microphones they will get excited. The facts simply don’t support anything Trump says and Trump knows that, but when people become frightened that things are changing too quickly, they want an authoritarian daddy figure to get tough and make things the way they used to be, whatever that means. Trump is quite simply a charlatan cashing in on the fear of the voters.

Meanwhile, the GOP is pretending to be surprised by Trump while they clearly created him. For years they’ve been telling their constituents that the entire worldwide media (other than FOX News) cannot be trusted, that ours is a scary world full of terrorists, that immigrants and non-whites are not to be trusted, that homosexuals are deviants, that liberals/progressives want to take your hard-earned money and possessions away from you and enslave you in a communist work camp. Trump is simply the first candidate to say these things in so many words. He is a predictable result of misleading the public and scaring the shit out of people.

I am happy to say that most Americans are not frightened enough to actually elect someone like Trump to the most powerful office in the world, but it remains to be seen how many people will get hurt in the process of his trying, and how much more damage his rhetoric will do to an already divided nation. I sincerely hope the majority of us have had our fill of the childish schoolyard bullying that FOX News and Trump promotes and America will now begin to embrace a wiser and more mature approach to politics.

Gee, I’m sorry I got so serious there. Even without all that political subtext, I think this is a pretty funny cartoon. I particularly like the Scarecrow getting creamed on the Jeopardy!-style gameshow. This cartoon was a collaboration with a friend of mine in Hamburg, Germany by the name of Michael Roth. Thanks, Michael! 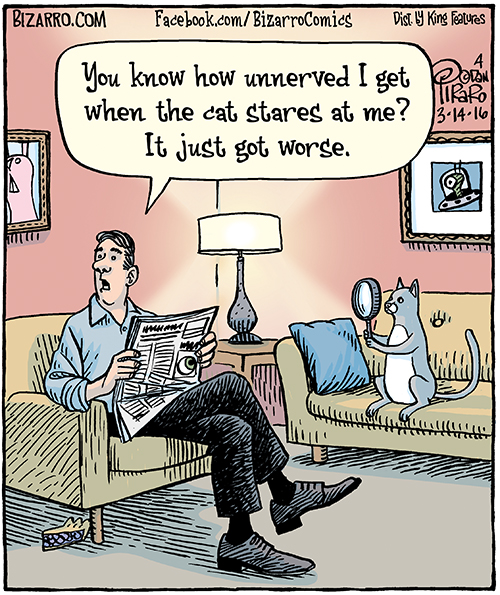 Here’s a cartoon about how cats stare at you sometimes. You’ll be happy to learn that I see no hidden political message here. 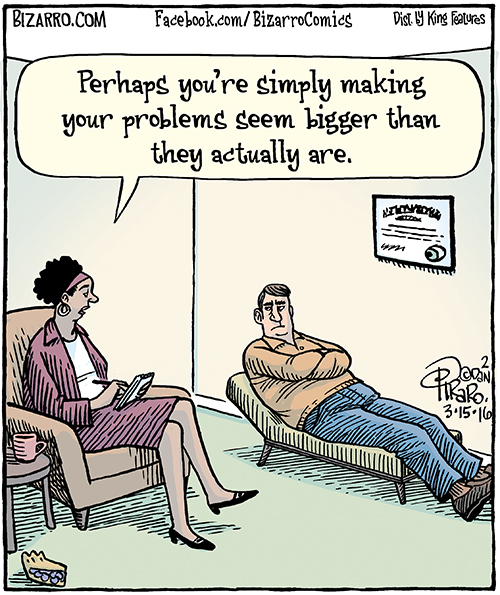 Will I ever get tired of doing therapy cartoons? Not likely. There is just an endless supply of humor to be found in this scenario. This one does have some hidden political content though, because Trump and FOX News love to pretend that America’s problems are way bigger than they actually are. Sorry, couldn’t resist. 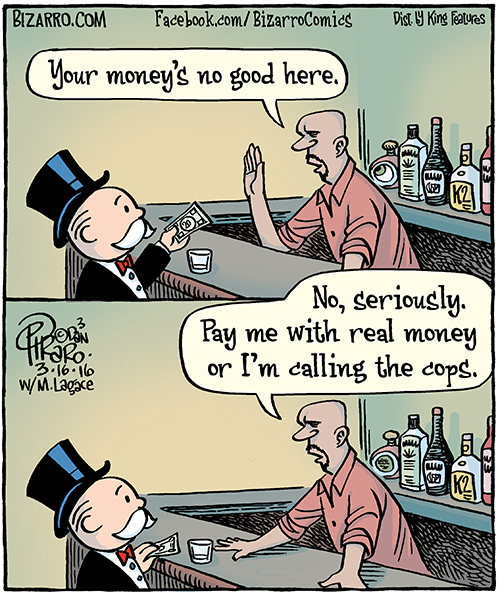 Did you know that the Monopoly man is named Rich Uncle Pennybags and that he was likely fashioned after J. P. Morgan? 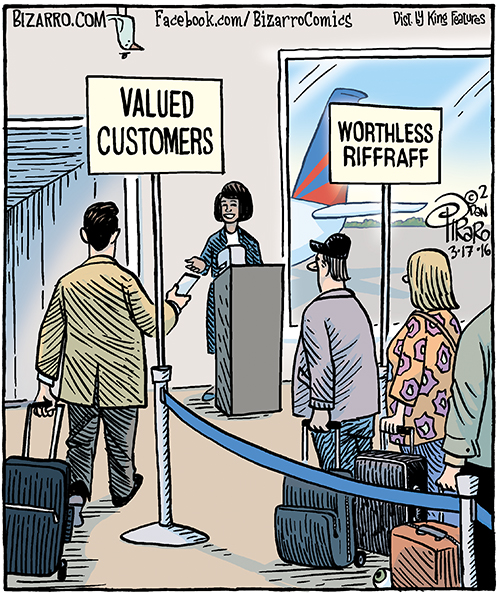 Lots of readers enjoyed this airport cartoon for obvious reasons. I wanted the sign on the right to read “Your Worthless Ass” but I couldn’t get away with that in newspapers so I went for this more civilized version. This is one of those rare cartoons that was born of personal experience because I can’t afford to fly first class and always battle feelings of self-loathing when in line at the airport. I’ve only flown first class twice in my life and both times it was because of some screw-up where they ran out of cheap seats and tossed me into first class with the fancy-pants folks. On both occasions I returned to steerage mid-flight to dance on hay bales while tattered country folk played the fiddle. 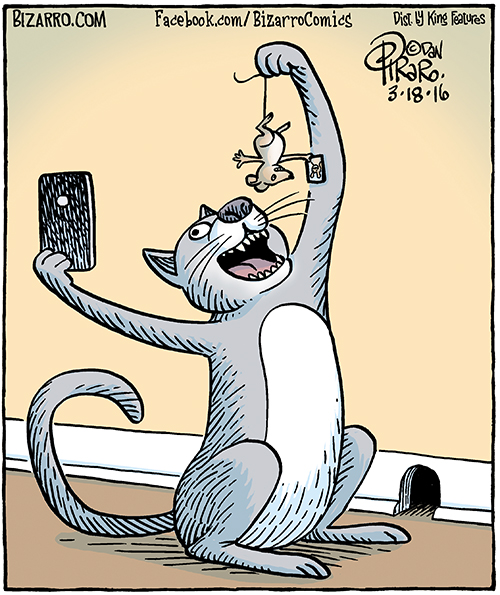 I’m kind of proud of this cat/mouse cartoon. It’s simple and says a lot about the current narcissistic trend of photographing ourselves doing literally everything every single day. 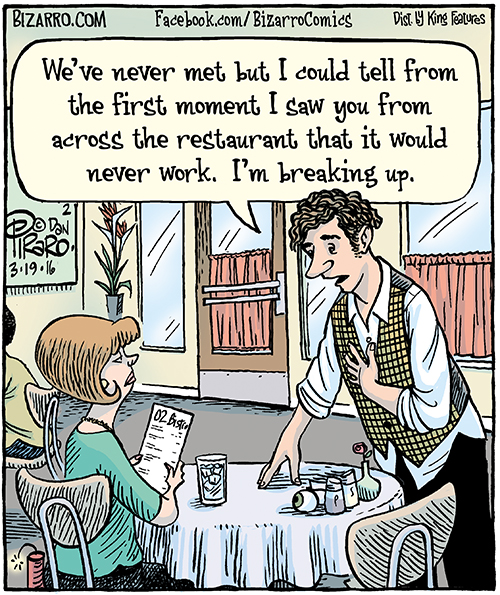 Here’s something super cool: Drew Carey, former standup comedian and possessor of his own sit-com, now gameshow host, tweeted about this cartoon! How cool is that? Here’s his tweet.

That’s it for this week, Jazz Pickles. I’ve got another one of my limited-time-only Bizarro cartoon T-shirts for sale right now so go grab one and give it to your friend or relative who is always complaining about politics. They’ll love you for it and so will I! Look at it here and now.