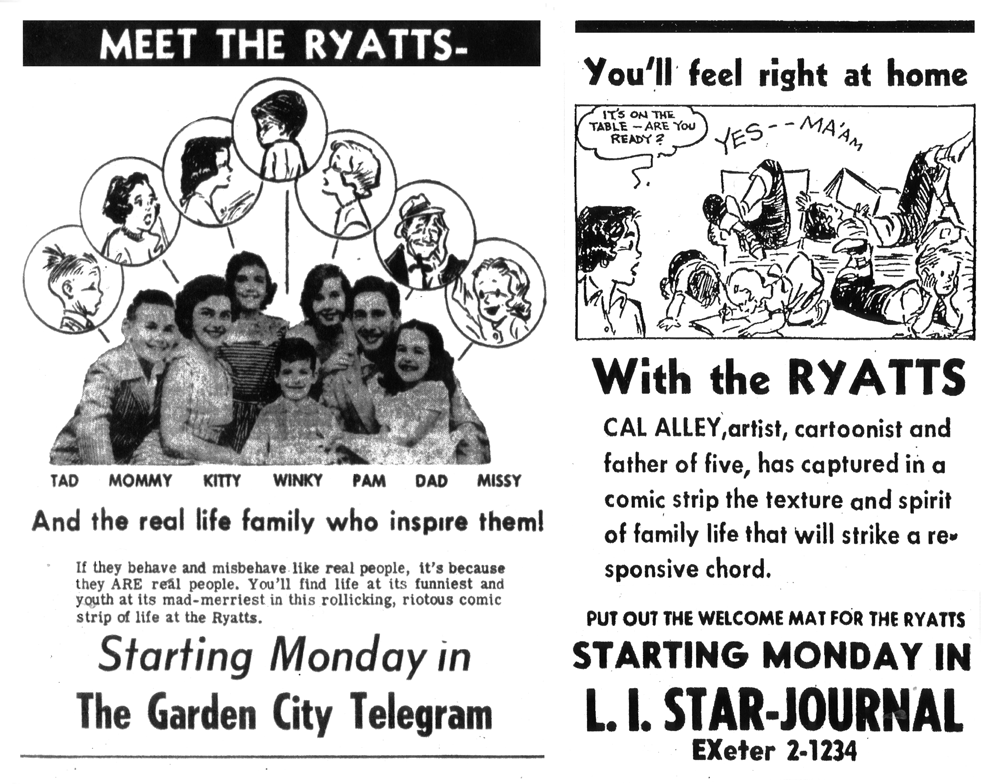 Do you like heartwarming moments? Break out the TUMS, as today’s strip will give you all you want. 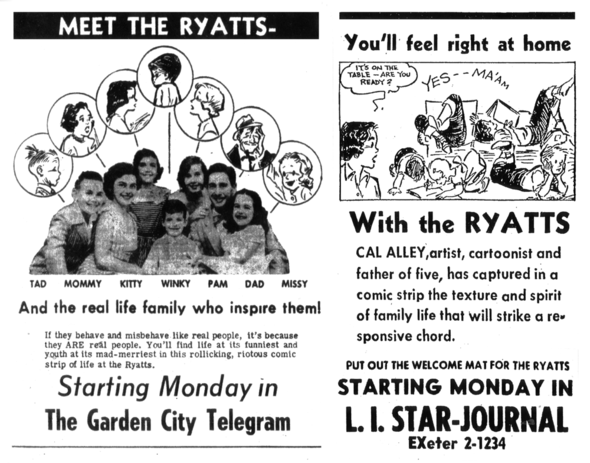 Two promos from when the strip began in 1954.

Cal Alley (1915-1970) was the son of Pulitzer Prize-winning cartoonist J. P. Alley, creator of a popular one-panel feature, “Hambone’s Meditations,” which featured a ragged old black guy who offered a wise bit of philosophy daily from 1915 to 1968. Mostly Southern newspapers took it. 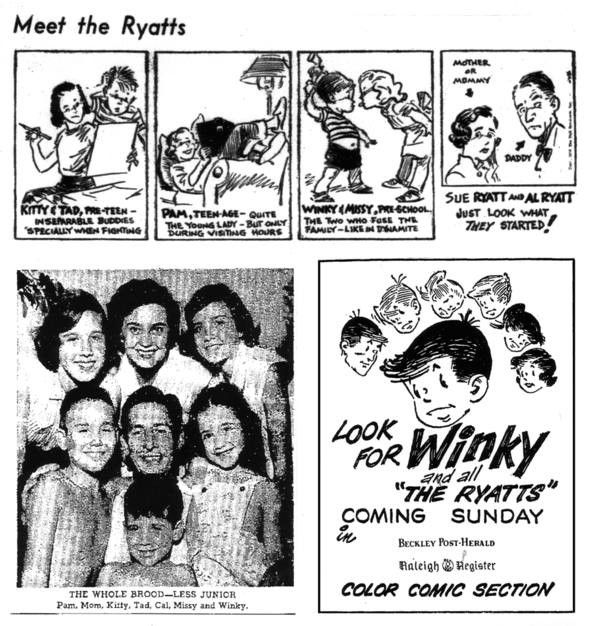 The Ryatts introduction strip, Cal Alley and his muses, and a promo for the Sunday version.

When J. P. died in 1934, Cal and his brother took over the feature, as well as doing editorial work for the Kansas City Journal and the Nashville Banner, and eventually joining the Memphis Commercial Appeal, his father’s old newspaper, in 1945. 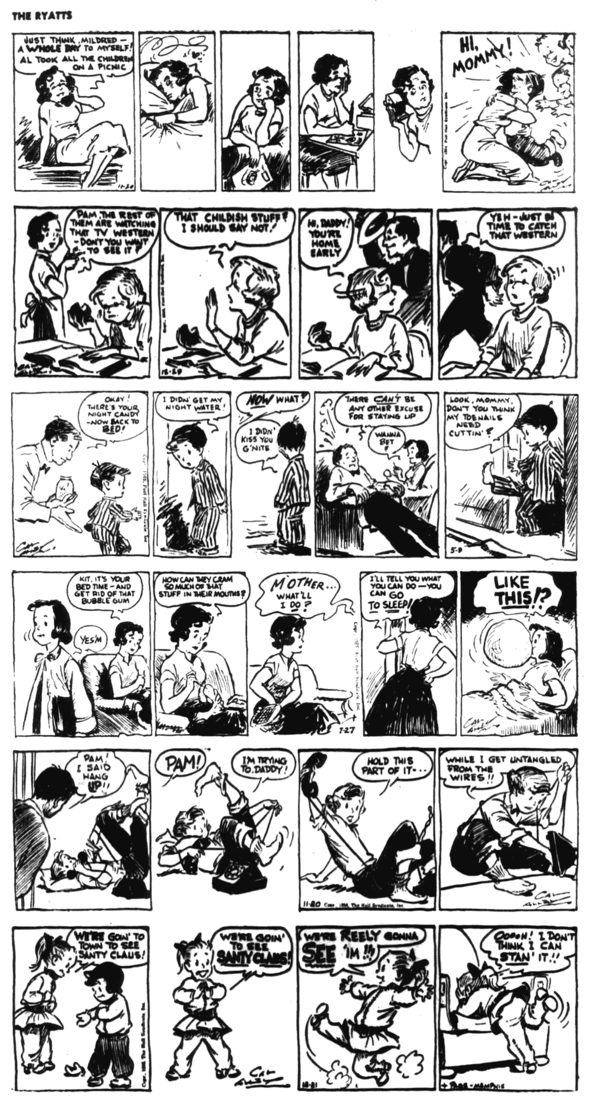 In 1954, he created a new strip for the Hall Syndicate based on his own family, their funny moments as well as bits of warm domestic routine. I’m sure this is what a lot of family strip cartoonists had in mind for years before, but this is pitched as a new idea in original publicity, with several pictures of the Alley family, and identifying the various members as the inspiration for their cartoon counterpart.  Bil Keane was a bit more subtle when his family strip debuted six years later, and a lot funnier. 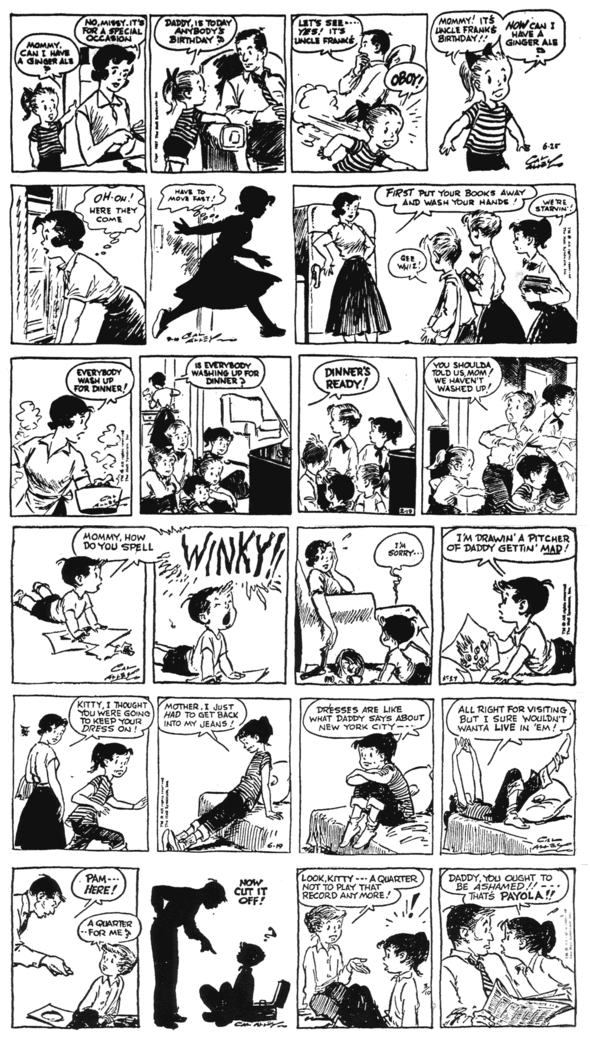 The Ryatts were the typically idealized family, albeit larger than usual, with Alter Egos of all seven of the Alleys (and their dog) being represented. The size of the brood meant that some material could be used with more than one character, for instance, young girl gags could be used with either of the teen agers Kitty or Pam, and boy gags could go to Winky or his slightly older brother Tad.

This tended to push out any individual personalities.  It was pretty light stuff after all,  but by giving more attention to Winky, he emerged as the lead character. In fact, when the Sunday strip was added in 1962, it was called “Winky Ryatt”. There were some papers that used “Winky Ryatt on 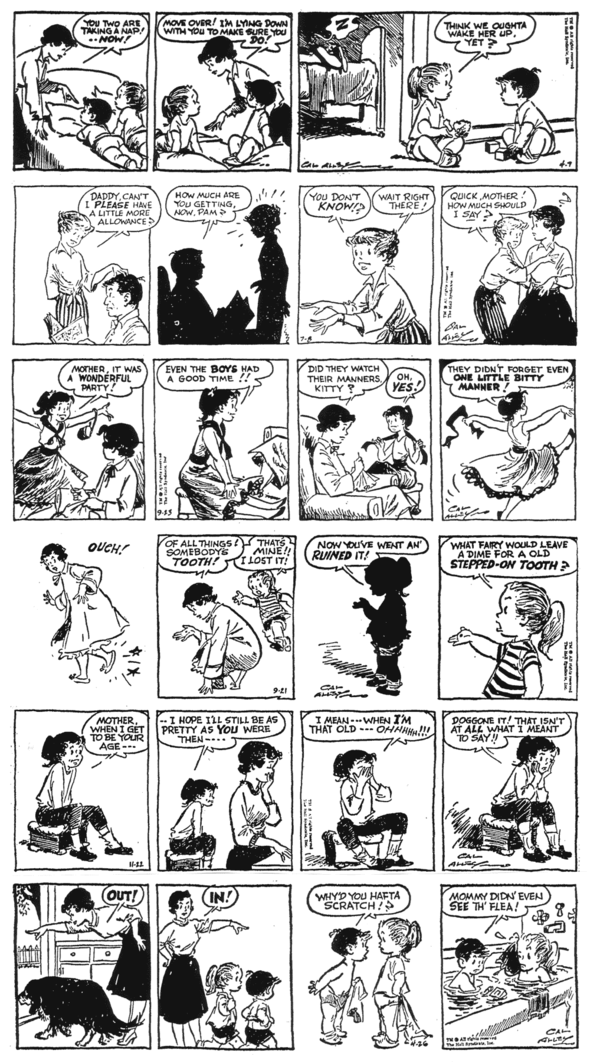 Reflecting Alley’s Tennessee roots, his cartoon parallels sometimes use regional words like “menfolk”, or phrases like “It surely is.”  As time went on, they all seem to have the same face. They all had those one-stroke eyes, even the dog. Reading it as a kid I never cared that much for the strip, as it seemed Winky was always blubbering about something. Maybe that’s a heart-tugger for feminine readers, but not much appeal for a little boy. Even the name “Winky” was irritating. I hope his real life equivalent had an offsetting sobriquet like “Cruncher.” 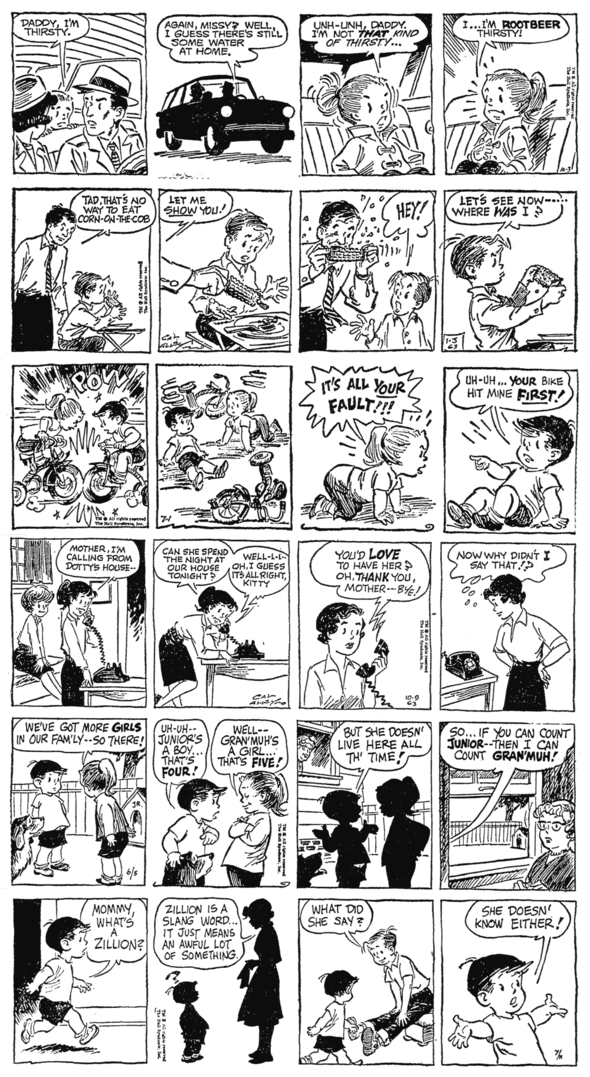 The Ryatts was a well-received series, and a common sight on many comic pages in the ’50s to ’70s, although Alley stopped drawing and writing in 1966 and was succeeded by Jack Elrod. The Sunday was never touched by Alley, being drawn by Paul Flannery and written by Gene Fawcette from 1962 to 1965, when those duties were also taken over by Elrod until it ended in 1980. The daily went on until 1994, finally being syndicated by NAS. 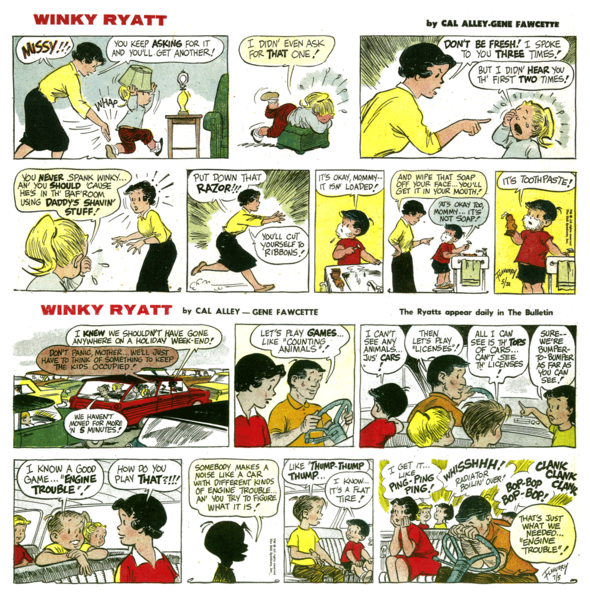 I knew John Prentice, slightly. Maybe I’ll do an entry on his start on Rip Kirby when his sixtieth anniversary takes place in the fall.  As for story authorship, Dickenson had his name on it for  a long time, but it could have been Eliot Caplin, too. He seemed to be able to write most anything.

I just hope that as systems change, we don’t start losing more material.

It might be so that the Flagg promo might have been done by a ghost, but the Rip Kirby sketch was famous. As a young man in 1965 I knew about the picture. It’s impressive that they got away with it.

My impression has always been that Alex Raymond was on the old-fashioned side.  Though one of the most brilliant cartoonists, his writing approach was influenced by past authors. His Flash Gordon was a little Jules Verne, a little Anthony Hope. Rip Kirby has similar influences, perhaps some Conan Doyle, and maybe more from Arthur B. Reeve.  Prentice was a younger man influenced by more modern story writing and cartooning. After all, he was doing comic book action stories before Rip Kirby.

The last Rip Kirby strip by Raymond is Saturday, 29 September 1956. The final words in the last strip are “I’m afraid my research work is ended!” Prentice’s first one was indeed October first.