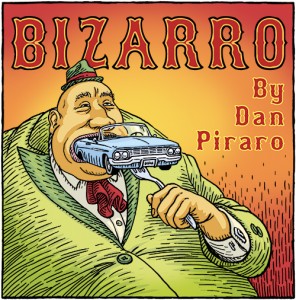 (To engage the embiggenation sequence count backwards from five to zero, then click any image.) 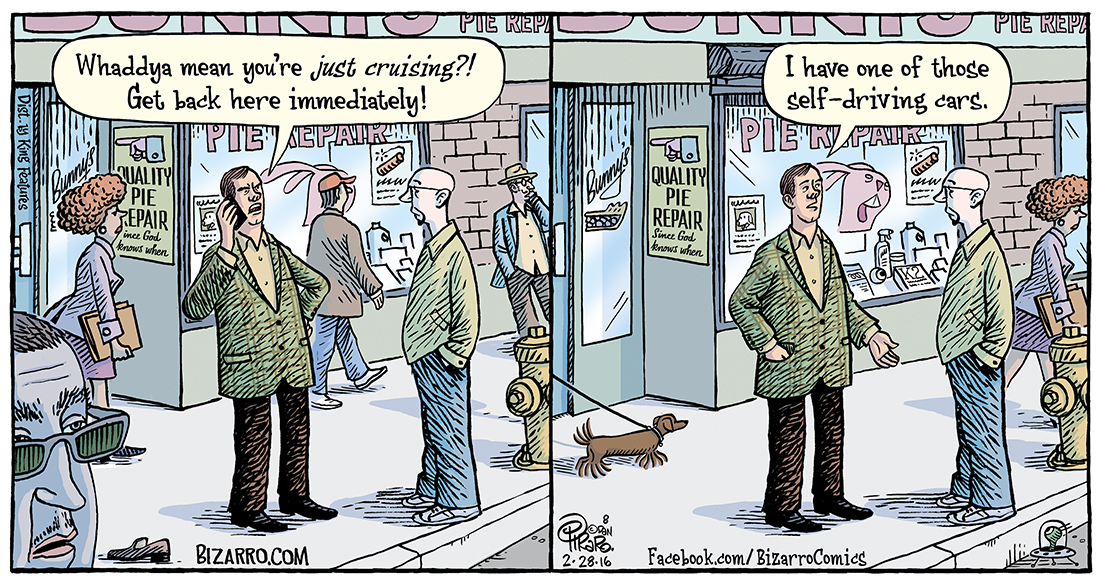 Bizarro is brought to you today by Relationship Advice.

When I was a boy in the 1960s it was widely believed that flying cars would be a standard feature of my adulthood. The Jetsons promised it and it seemed inevitable. But the lousy driving habits of most people (science has determined that the exact percentage of crappy drivers on the road is everyone but you) have kept that from becoming a reality. Strangers would be crashing into your upstairs bedroom or fifteenth-floor apartment living room.

What we did not see coming, however, is self-driving cars. Even a few years ago I would have thought this was further away than it turned out to be. But now it seems likely that in my lifetime, most cars might be self-piloted. As an avid motorcyclist, I can’t wait for that. Unlike humans, computers actually can update their Facebook status or read and send texts safely while driving. I’ll feel much safer when smartphone-obsessed drivers are safely in the back seat where they belong. Not to mention the alarmingly large number of horrible drivers (everyone but me) who aren’t on their phones, they just suck at driving. 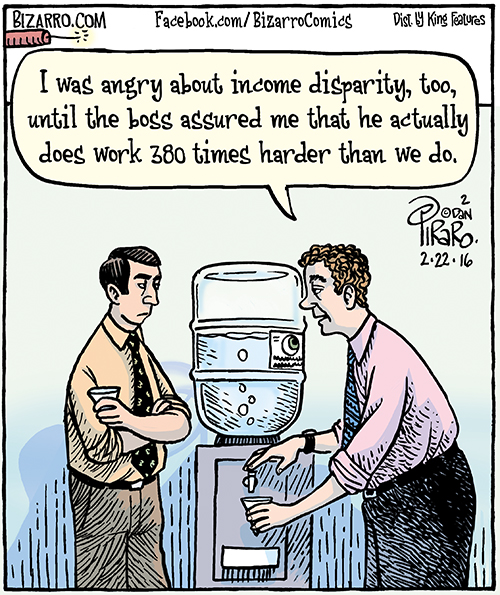 Thanks to Bernie Sanders, a lot of the talk on the Democrats’ side of the presidential campaign has been about income disparity, so this gag seemed timely. I’m told that “380 times” more is an average amount of disparity between CEOs and workers. I don’t know where that number came from, though, so don’t complain too vehemently if you heard differently. FOX News, which is a shill for big money and monster corporations, will tell you the number is much lower than that and give you a thousand reasons why the handful of folks at the top making enormously huge salaries is good for America and good for you, the little guy. Legitimate news organizations, on the other hand, will point out that wealth continues to move toward the top few percent of people and the rest of us in the middle class are sliding slowly toward the bottom. History tells us that’s not good for society in the long run. I don’t have an easy answer to this, I just think it is worth thinking about. (Sorry to offend those of my readers who trust FOX News but when one network says one thing and virtually everyone else in the world takes the opposite view, you have to wonder about that one network. A quick glance at who their friends are and you have the answer.) 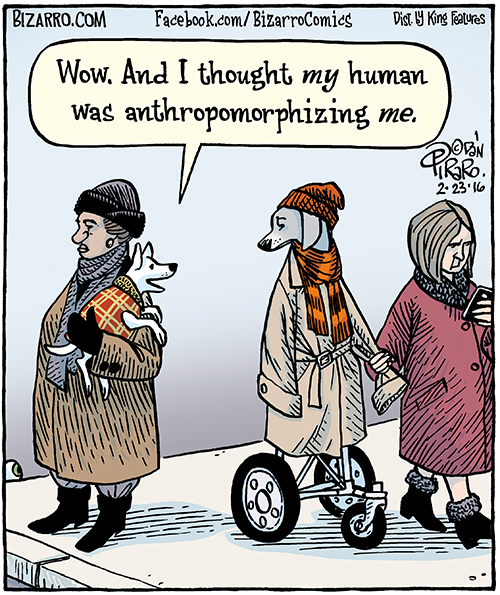 Here’s a simple gag about people who dress up their dogs. Relax, there’s no political message here. 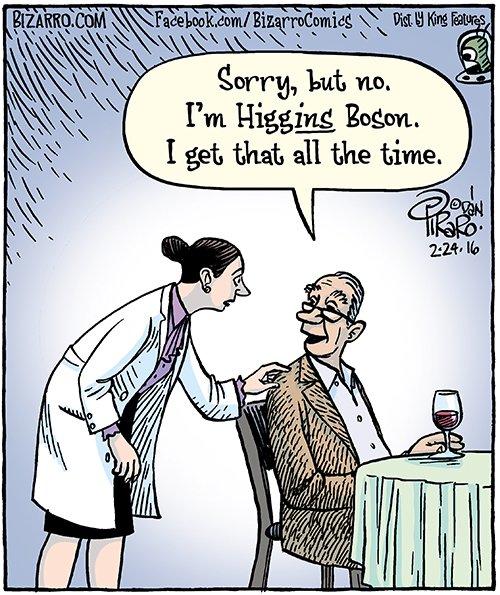 As I knew I would, I got a few emails and comments asking what this gag is about. Physicists have long been looking for something they call the “Higgs boson,” which is a particle that is fundamental to particle physics theory. It’s one of the reasons the Large Hadron Collider was built. To be honest, that’s as much as my tiny brain can fathom about it, but it was enough to stage the comic as though a person with a similar name could be mistaken for the particle. I knew when I wrote this gag that it would be hilarious to certain folks and a complete mystery to others. A good friend of mine is a super smart best-selling author of books about cool things that cool people read and he hired me to do some cartoons for his next book. This was one he liked very much but his editor didn’t think was quite right for the book, so I used it in Bizarro. My friend is Daniel Levitin, if you’re curious. 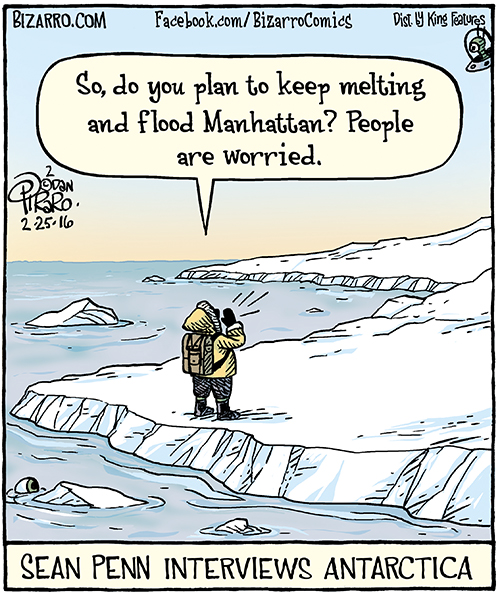 Lots of people liked this cartoon about Sean Penn’s proclivity for inserting himself into major news stories. One guy wrote to me to tell me that global warming is a myth that I should not be perpetuating. (sigh) 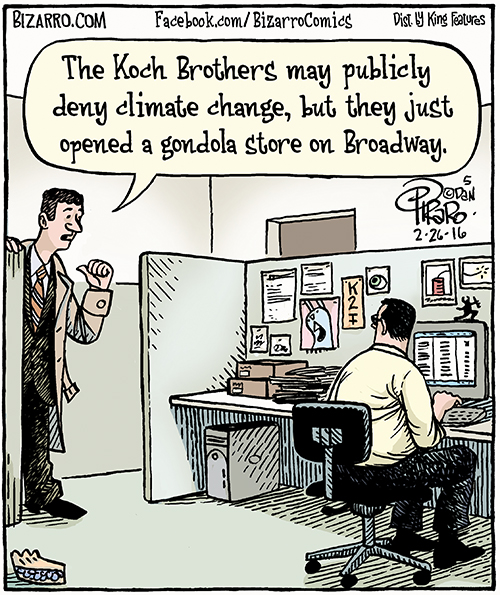 I’ve read a few things that say that the streets of Manhattan might well be under a few feet of water in the not-too-distant future. This fascinates me. How will they deal with it? I cannot imagine the city being abandoned. Will they build a dike around the island to keep the water out and just live below sea level? We saw how that worked out for New Orleans. Will they simply abandon the ground level, move everyone up one floor, and fill the canals with gondolas? Anyway, whatever happens and however much the Koch Brothers deny climate change, you can bet they are planning investment strategies to capitalize on it. They’re too smart (and greedy) not to. 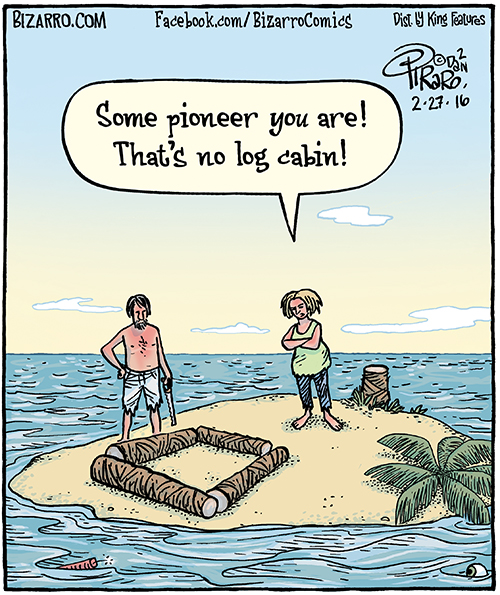 This last cartoon makes me smile. Hope it does the same for you.

That’s my cartoon roundup today so I’m off to my secret underground bunker for another week. But first I’d like to remind you that if you’re looking for a special and unique gift for someone who enjoys art and humor (perhaps that someone is you!) a limited-edition, signed and numbered, fancy-paper fine art print of one of my Bizarro cartoons might be perfect. I sign each one with my own pen, held in my own twisted claw as the print rests serenely on my kitchen table and I struggle to keep my cat from walking across it. What fun it would be to have something on your wall that was once in my modest home! Here’s where those things are being kept.