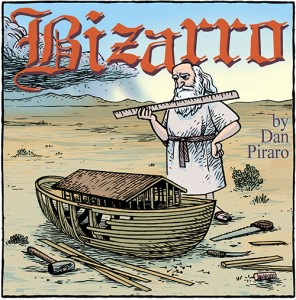 (To embiggenate the ark or any other cartoon, click it with your clickerator.) 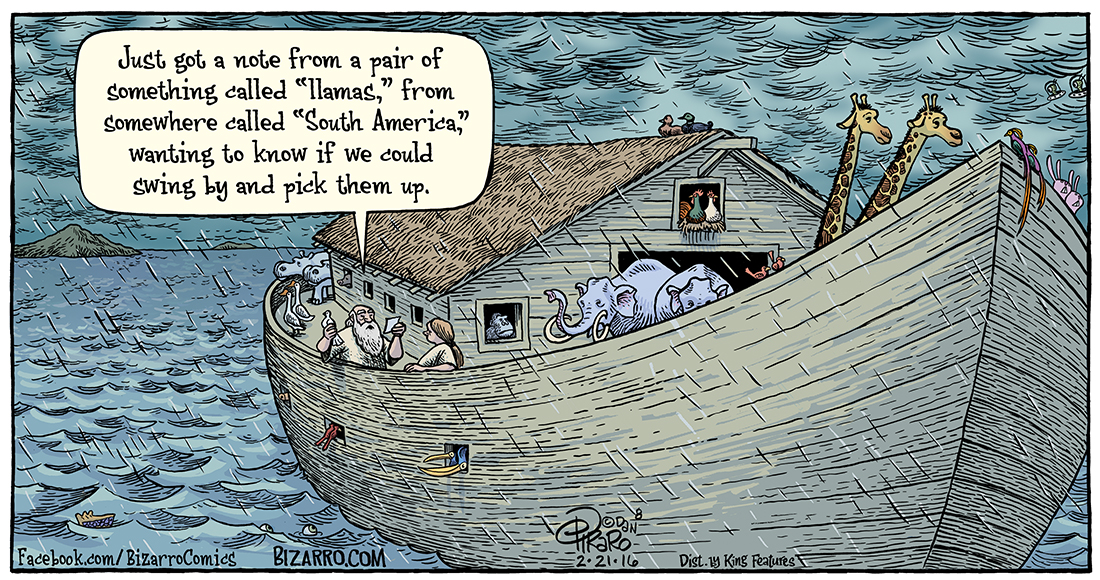 Bizarro is brought to you today by American Political Anomaly.

The meme behind those blue words above are not my attempt to campaign, I just thought it was a particularly clever and true anomaly of American voters. Polls consistently have shown that most Americans are Christian but most are also terrified of socialism, even though much of our country already incorporates socialist programs that most people love and have no wish to get rid of. And as far as developed nations go––Canada and virtually all of Europe––we’re way less socialist than the other countries we visit on holiday or consider livable. Personally, I’d not want to live in a completely socialist or completely capitalist country. Fundamentalism of any kind ruins everything. It takes a lot of wisdom and maturity to embrace people who believe differently than you do, but I think balance and diversity is the key to happiness and a peaceful society with anything resembling a fair chance for all to succeed.

The Noah cartoon above might be interpreted to illustrate this concept in a roundabout way in that it shows the sort of thing that can happen when we are myopically concerned with life inside our own tiny bubble of experience. It’s a stretch, but it’s there if you know where and how to look.

The title panel art above came from an old Bizarro cartoon that, unlike the paragraphs above, has no philosophical pomposity behind it. But I still think it’s kind of funny.

And now, here are the rest of the week’s cartoons… 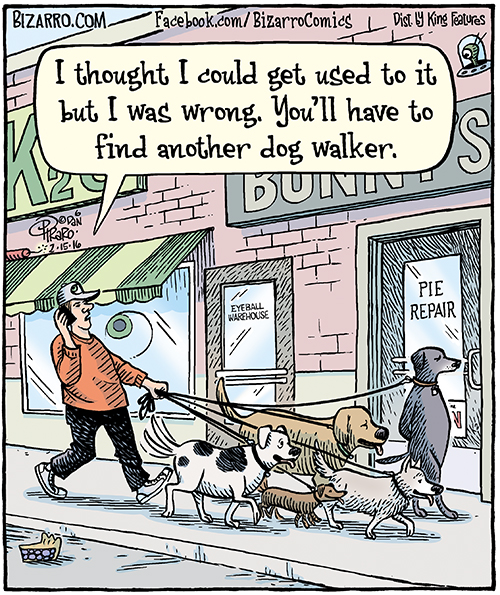 If you live in a big city you’ve likely seen professional dog walkers who have numerous dogs on leashes for big group walks. I’ve always thought it looked like a great way to dislocate your shoulder or maybe lose an arm, but I guess it works. The random thought above occurred to me recently when thinking about this practice. No idea why.

Here’s a wacky story I found myself in the middle of last week. A guy writes to me on FacadeBook and asks what my comments are on this image. Turns out he runs a FB page about cops (called The Habanero of Texas) and had created and published an extremely similar photo version of this cartoon the day before I published mine. I submit my cartoons three to four weeks ahead of publication, so mine was already in the pipeline, but he had no way of knowing that. At first he thought I’d stolen the idea from him and I can’t blame him since mine appeared the day after his and, as you can see, they’re almost identical. Seems otherworldly, but like most things that seem that way, there’s a logical explanation: Since Uber and Lyft are business models that incorporate cars that are not usually used as taxis, cop cars moonlighting as Uber or Lyft drivers is one of those ideas that is going to occur to lots of people independently. Those of us who write humor for a living find this kind of coincidence happens regularly. The compositional similarities are due to the fact that most car pictures are taken from this angle and he was using what was available; I used it because it is also the best angle to show the cops in the front, the passenger in the back, and a bit of the police sign on the side. Anyway, he and I had a chat about it and he was cool. Here’s his page about cops if you’re interested. 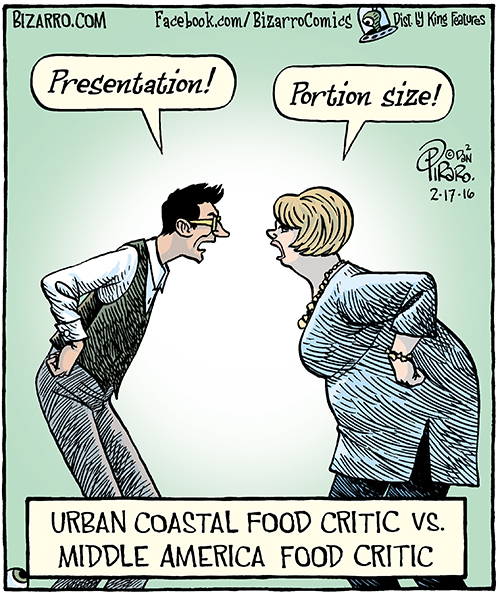 As a person born and raised in Middle America and who has spent a couple of decades in large coastal cities, I can attest to the truth of this cartoon. Not everyone in both areas reflects this concept, of course, but I have personally witnessed pretentious big-city “foodies” talking about the “look” of food at a given restaurant, and large midwesterners classifying restaurants purely by virtue of the relationship between portion size and price. I was raised in a small town in the middle of the country and still visit my family there yearly. When I do, it occurs to me that there aren’t very many independently owned restaurants with what would pass for good food in New York or LA, but there are an awful lot of all-you-can-eat buffets. And the parking lots of these places are usually full of cars. (And most of those cars are giant SUVs.) 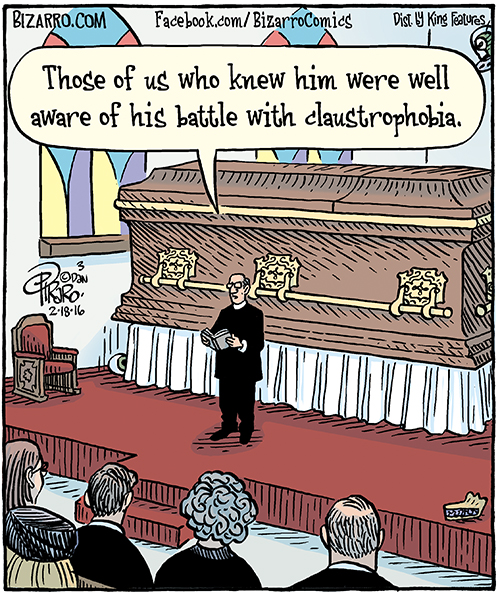 If you lost someone recently and are not ready for a funeral cartoon, my sincere apologies. On the other hand, I got a note from a funeral director this week who loved this cartoon. 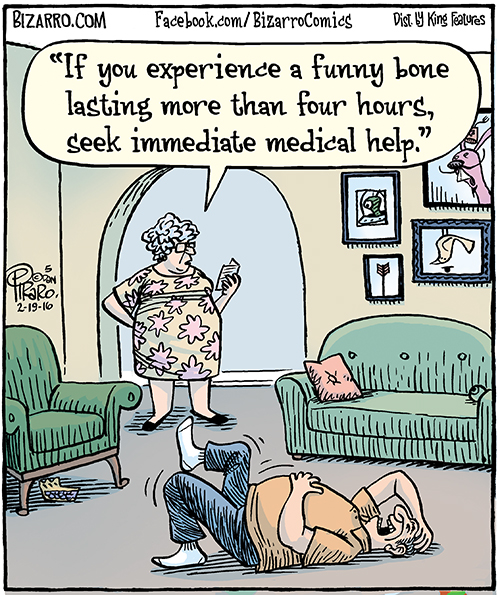 Here’s a spinoff of the erection drug TV commercials that I thought might raise the eyebrows of some of my client newspapers. As brutally honest as the rest of the content in newspapers can be, most try to keep the funny pages very victorian. To my surprise, I didn’t get a single complaint, however, and that makes me happy. It’s a harmless gag that I find amusing.

And my final cartoon for the week displays my cynicism toward young marriages. I got married the first time waaaaay too young (21) with predictable results. The second time I married before I had known the person well enough and the results were even swifter and more painful. As much as I try to be the good wedding guest, when the bride and/or groom are under 30ish, it makes it difficult for me to pretend they don’t have a very high probability of a bitter and expensive divorce ahead of them.

For a very long time I was cynical about romantic relationships in general but I’ve since reinvested my faith in partnerships. I’ve come to believe that beneficial romantic partnerships are possible but it takes a lot more than young love and lust to accomplish. A LOT more.

Which brings me to my final point: because of some houseguests, my sweetheart and I didn’t celebrate Valentines Day last weekend when everyone else did. So today I’d like to wish my beloved Olive Oyl a Happy Valentine’s Day. I don’t deserve a partner as wonderful as you but I’m going to keep my head down, my mouth shut, and ride my good fortune as long as it lasts! Here’s a fun VDay cartoon from the archives.