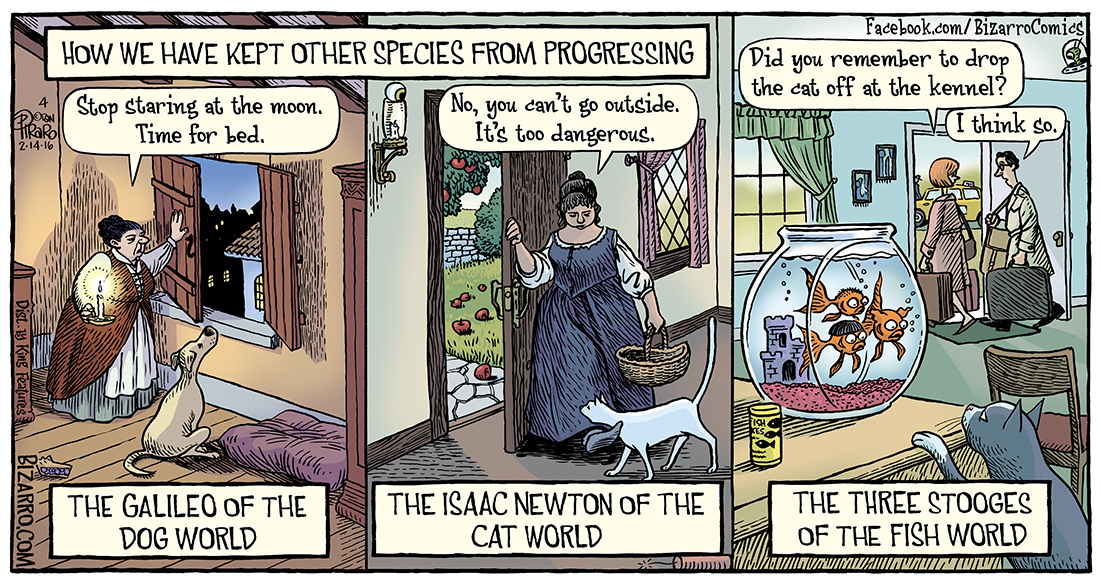 Bizarro is brought to you today by That Pesky Bursitis.

The concept at work in this cartoon is that an occasional member of another species might well have been a genius but because they lived under the control of humans, they might have been stopped from fulfilling their potential. It’s not meant literally, of course, nor am I holding the Three Stooges up to the level of Sir Isaac Newton. What it does bring to mind, though, is the way we as humans like to congratulate ourselves on all the amazing advances and inventions we have created over the relatively short course of our species’ existence. It always occurs to me, however, that all of those advances are due to a very tiny percentage of humans who happened to be brilliant in a certain way. The other 99.9% of us are (and have historically been) as dumb as a box of rocks and pretty much just consume, reproduce, and die, myself included. If all of humankind were like me, there might be some nice art on cave walls but we’d still be wondering what those tiny lights in the sky are and probably believe the moon was an eye in the sky that takes 30 days to blink. 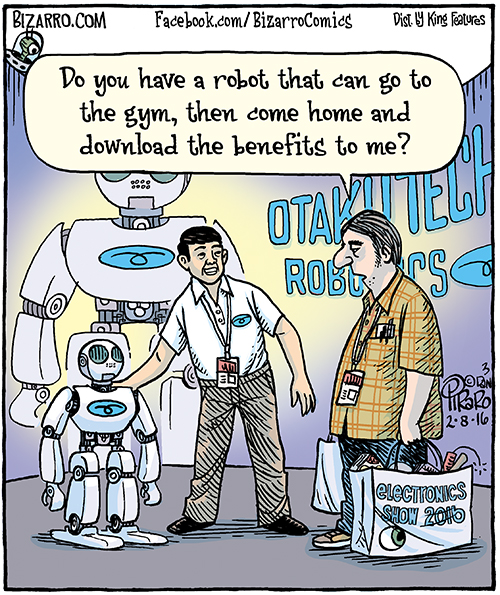 Speaking of technology, there was some big electronics show in Las Vegas not long ago and, as always, there was a lot of buzz about the latest robots. I’m one of those people who believes that artificial intelligence will eventually surpass us and be able to control us. It’s not hard to imagine us building a system that can think better than we can and independently from us once we turn it on.  And it is very difficult, for me at least, to imagine us keeping a lid on that possibility indefinitely. The “technological singularity” is what we’re calling it. It’s too late to stop it now––the robotic cat is out of the bag, as it were––but I strongly suspect it’s going to be a royal pain in the ass one day not too far into the future. My life already comes to a screeching halt when my laptop dies, which it did just a couple of weeks ago, and that’s nothing compared to “HAL” deciding to lock us out of everything. 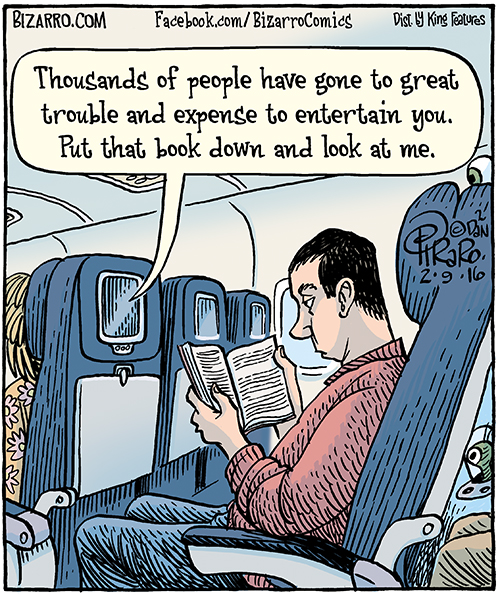 I love to read and virtually always do that on flights now, but I also rather enjoy vegging out in front of a TV screen. There have been times on flights where the temptation to put my book away and channel surf like a zombie has been not unlike the above cartoon, so I’m actually kind of relieved when I board a flight and see that it does not have TVs. 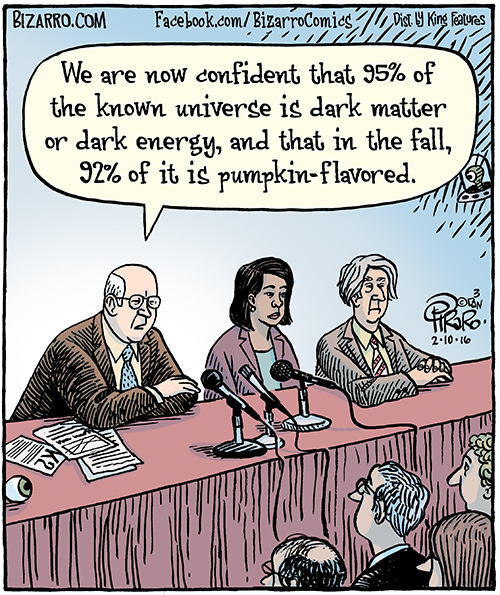 The size and contents of the universe is a fascinating subject and one far too deep for a nitwit like myself to properly understand. The absurdly complex nature of it is one thing that causes so many of us to believe in grade-school, mythological concepts like the ones in The Book of Genesis and any number of other creation stories. A kindly gray-haired grandpa in the sky is a lot easier to conceive of than quantum physics. And much more comforting in times of trouble, too. That debate aside, however, one thing I know for sure is that every fall, far too many things are pumpkin flavored, which I don’t care for at all. 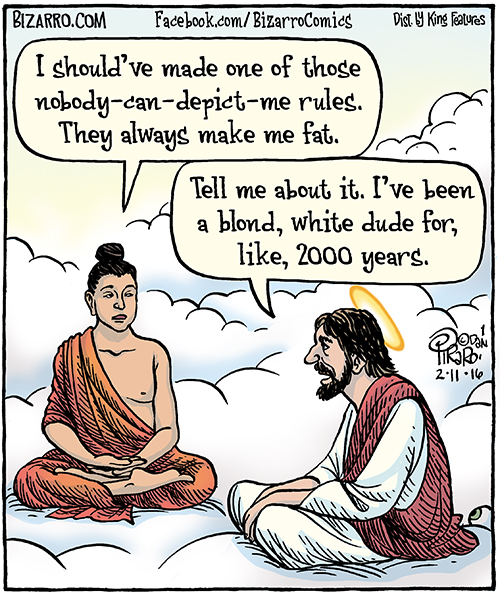 Here’s a cartoon that caused an avalanche of comments on my Bizarro Facebook page about who Jesus and Buddha actually were and what they looked like. Many people said they’d never seen Jesus depicted as blond, to which I offer these pictures of a couple of actors who played Jesus in two famous big-budget Hollywood movies. The concept behind this kind of thing is simple: people tend to make gods in their own image as opposed to the other way around, as many of us were taught. 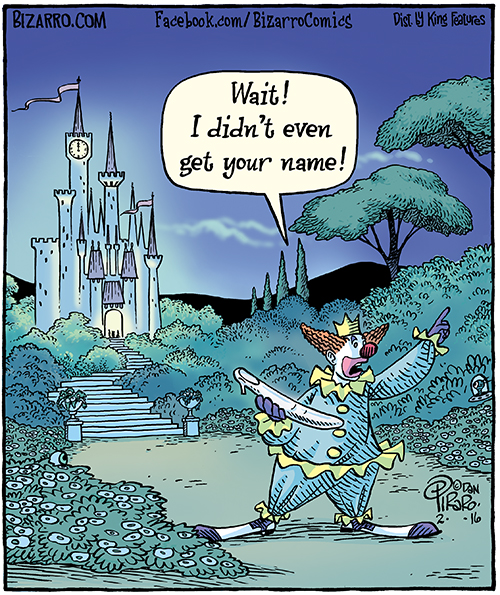 I got a few questions from readers asking what this clown cartoon was about. All of them were from readers who only see Bizarro in newspapers, which often print them so small these days that it’s hard to make out more complex art like mine. Sorry about that. Seeing it larger on this blog probably tells you what you need to know but if not, it’s a clown version of Prince Charming who has just witnessed a clown Cinderella run away from The Royal Ball at midnight, leaving only her gigantic, glass clown slipper behind. 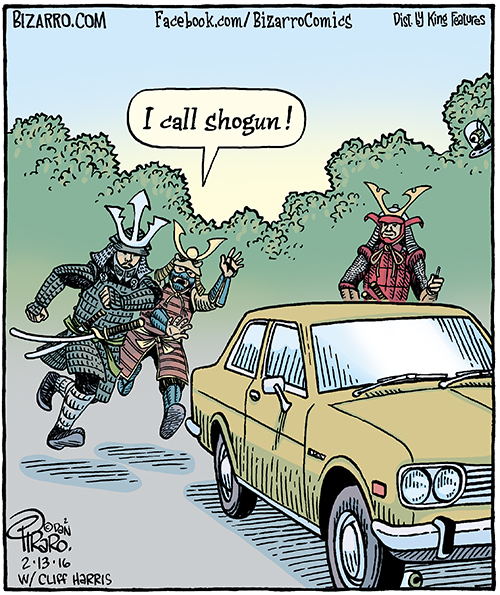 And finally, here’s a funny little notion from my good friend and occasional collaborator, Cliff Harris the King of Wordplay. In the U.S., children and teens who are not driving a car often compete for the front passenger seat by yelling “Shotgun!” which is a reference to stagecoaches in the Old West. The legend is that the person holding the reins of the horses would sit where automobile drivers sit now, and next to him was a guy with a shotgun at the ready to defend the coach against robbers. Here, we use Shogun warriors from Japan.

Cliff and a couple of his buddies are authors of a fun book of wordplay that you might enjoy. Give it a look and pick up a copy. I guarantee that your money could not go to a nicer, more deserving guy.

Unless you send me some of it and perhaps you should. If you read my cartoons online instead of in actual newspapers, you’re getting all of my hard work for free! Wouldn’t it be nice to toss me a buck or two now and then to keep me in the cartoon-writing business? One way to do that is to pick up one of my super nice, limited-edition, signed and numbered cartoon prints! They’re large and quite beautiful and every single one of them has been on my kitchen table where I do my signing! Looky here.