Today I invite your attention to The Phantom’s upcoming octodecennial  anniversary, which occurs next Wednesday. So I offer some Phantomcentric odds and ends from the treasure room.

If you are a Phantom Phan, you are probably already aware of the longevity of “The Ghost Who Walks,” the creation of the fertile mind of Lee Falk (1911-1999). The Phantom seemed to be inspired by the jungle adventures of the early twentieth century, by popular writers like Edgar Rice Burroughs and H. Rider Haggard. But some have pointed to a much more obscure influence, at least in some small way.

I don’t mean to stir up controversy, but it is a topic worth putting out there. Falk’s Phantom has been often called the first mask-and-costume superhero of the comics, but a nagging possible usurper to this title is the obscure “Phantom Magician” who appeared a year before Falk’s hero, in the series “The Adventures Of Patsy” by Mel Graff for the Associated Press’s vibrant but insignificant syndicate.

The flamboyantly attired “Phantom Magician” among other colorful cast mates in
The Adventures Of Patsy (29 April 1935) © 1935 A.P. All Rights Reserved.

The Phantom Magician was very unlike the Falk creation, though, outside of appearance. Falk’s character is a straightforward, two-fisted man of action, in high adventure stories. Graff’s  Phantom took little girl Patsy into the storybook world by first creating a princess getup for her by way of magic.

He wasn’t much of a Mandrake-style illusionist, either. Some small scale chasing/hiding stories followed, with standard bad guys from kiddie literature like a witch (see above) But after only about four months, The Phantom, heretofore a magic genie-like figure, revealed himself to be Patsy’s uncle Phil, and the locale of the strip changes from the make-believe of fairy tale land to the make-believe of Hollywood, and (now unmasked) uncle Phil becomes a screen writer. Coherency wasn’t a priority in the strip.

Of course, Graff would be a King Features asset years later when he worked on Secret Agent X-9. Perhaps it means nothing, but Uncle Phil’s full name was Phil Cardigan, and X-9’s was Phil Corrigan. 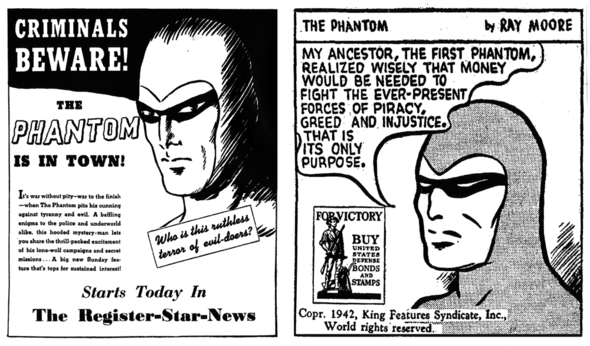 In 2012,  I commented on the debut Phantom comic book from Italy that the artist had made an error in presenting The Phantom with visible eyes looking out from the mask. SEE:

But since then, I’ve unearthed the above original promotional spot that was obviously a piece of art that was included in the material sent to the Florentine publishers. But very early on, Mr. Walker’s pupils vanished when the mask went on, just like all great superheroes. 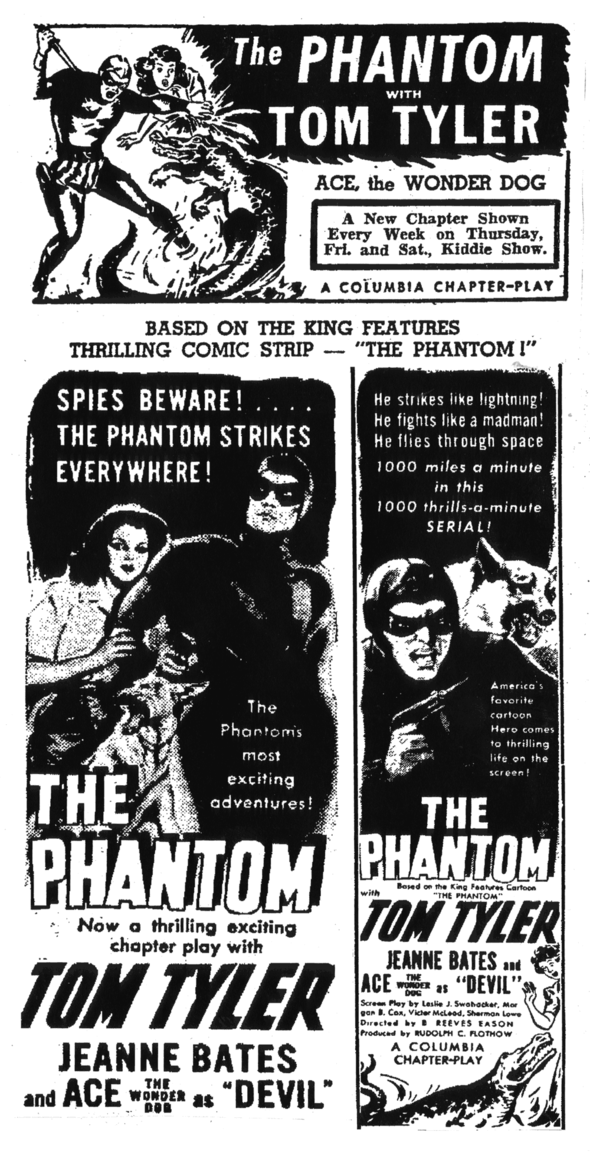 The Phantom’s first silver screen venture was in 1943.

Cowboy star Tom Tyler played The Phantom in a dreary Columbia serial during World War Two. I’ve seen it, thought it was very uninspired, the same sort of pith-helmeted escapades that had been done hundreds of times back to the days of The Perils of Pauline. Lee Falk thought it was so bad, he vowed never to allow Hollywood to get hold of one of his creations again. Maybe some real-life Phil Cardigan was involved. Though of course, Falk was lured back several more times. 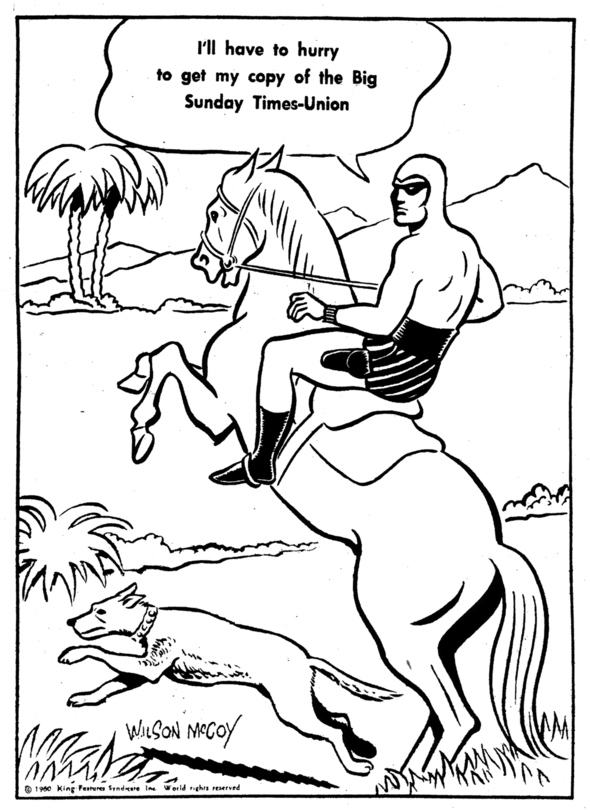 A specially created Wilson McCoy drawing for a 1960 coloring contest. Who’d have figured you could get the Albany papers in Bengalla? Be sure and stay inside the lines. 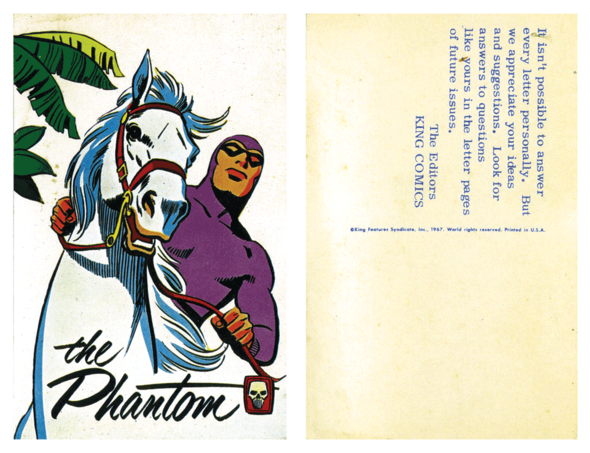 Fan mail reply post card for readers of the “King Comics” Phantom series, 1967.
Kind of hard to be satisfied with something like this. 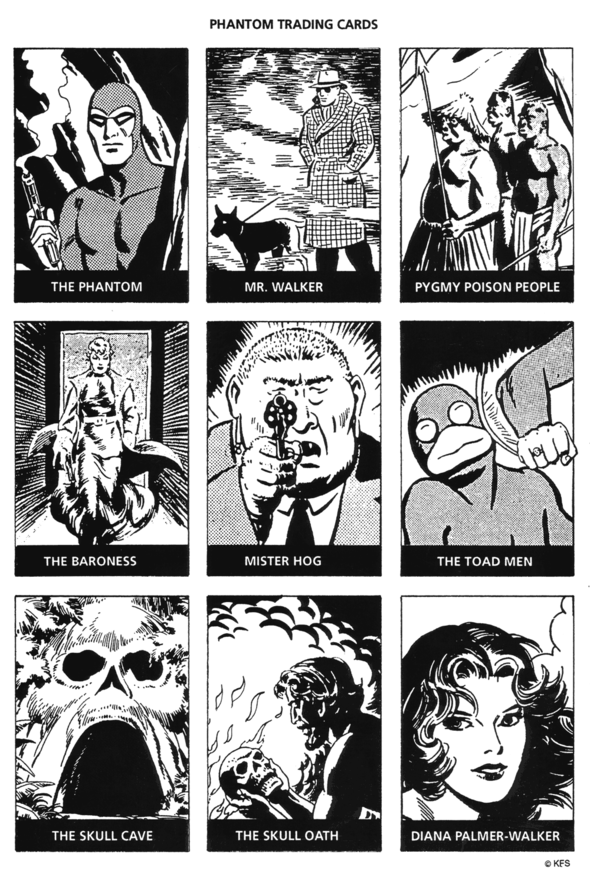 This is a sheet of proposed Phantom cards from about 1990. If memory serves, they had something to do with the Phantom fan club in Australia, where “Mr. Hogg” is always polled as a favorite Phantom Foe.
I guess they were rejected.

As you ponder these strange objects, raise the cup of Alexander (or any similar vessel you have on hand) in a heartfelt toast to The Ghost Who Walks on his long journey, and may he continue another eighty years.

Barney Google is a strip that changed several times. The first period, when he was just a working stiff, it was almost a continuation of DeBeck’s earlier “Married Life” series. See here:

Then there was the Spark plug era of long continuities about horse races won and lost;then Spark Plug was traded off for Snuffy and his hillbilly stories.

The “Unique Pull-A-Part Books” were made by Unique Industries in Philadelphia in 1978. They were extremely small books, as you describe, if they can be called books. The “Pull-A-Part” aspect is that one would  separate them along perforations between them. The titles included Beetle, Blondie, Dooley’s World, Hi & Lois, Katzenjammers, Popeye, Redeye, Snuffy Smith and Tiger.

They’d be seen at the supermarket, sold in packs of five, intended as cheap toys to occupy a bored young mind while Mom does the grocery shopping, at least I recall them being there.  The original packaging suggested they would be jolly party favors for kid parties.

If they’re worth anything, I don’t know. I didn’t see them listed in my (now aging) copy of Overstreet, so maybe you could suggest to them a new entry.

Glad to find something to do with these crumbling pages. Most of the pages I used last week came from a comic section (Milwaukee Sentinel) bought in Wisconsin almost forty years ago, and they hadn’t seen the light of day since.

The Archivist.
Skulking in his Skull Cave