Ask the Archivist: TOP COMICS OF 1926 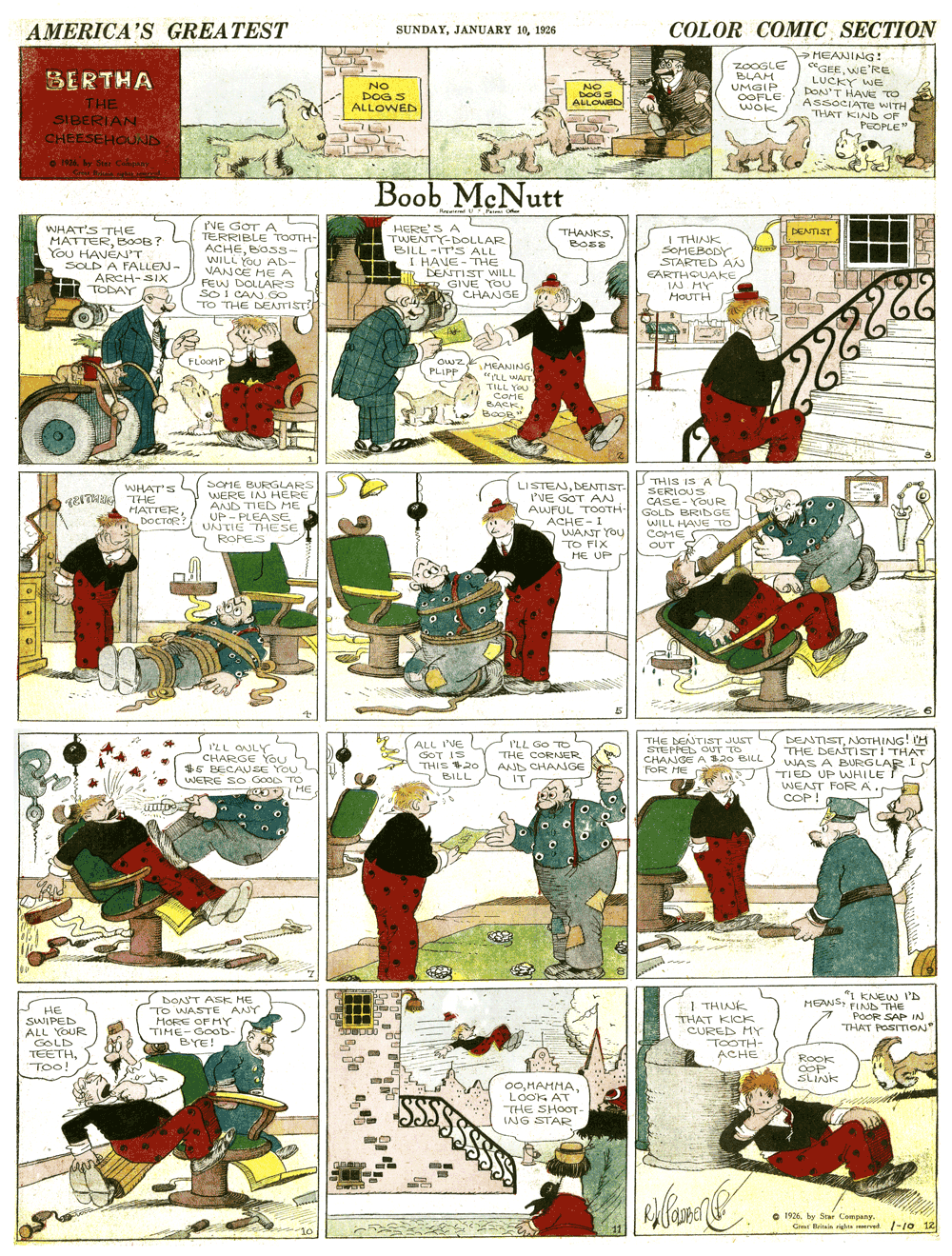 In today’s excursion into yesteryear’s yucks, we zero in on Sunday, 10 January 1926. On that date, the Hearst comics started an evolutionary change.

For many years, Hearst Sunday offerings would take up a full four-fifths of a page, with a long single panel striding the top, with a sort of editorial comment on the action below. On that day ninety years past, the space was converted into a second, smaller strip, so you’d actually have two for the price of one.  A long time ago, a cartoonist of those days, Franklin Osborne Alexander, who worked for one of our long-ago competitors (The Ledger Syndicate) told me that several years after the Hearst top comics made good, his feature (Hairbreadth Harry) had to start having a second feature on the Sunday page as well,  “So they could sell it to clients as two strips, and charge more. We still only were paid for one.” One would assume the talent was treated better at King Features, though the increase in actual titles was proudly marketed in the selling of our comics.

Since all of them only lasted a short time, it makes it seem the artists might have been rushed into it. Many eventually just settled on some tried-and-true earlier-created characters to fill the top space, like Swinnerton used Mr. Jack to adorn Little Jimmy, and Segar would bring back Sappo for Thimble Theatre. Only several of our top strips began the top comics that day, what could be regarded as the major titles that would be mainstays of the Hearst chain’s section. The secondary titles like Just Boy, Felix and Freddie the Sheik, would acquire their toppers in the months to follow. 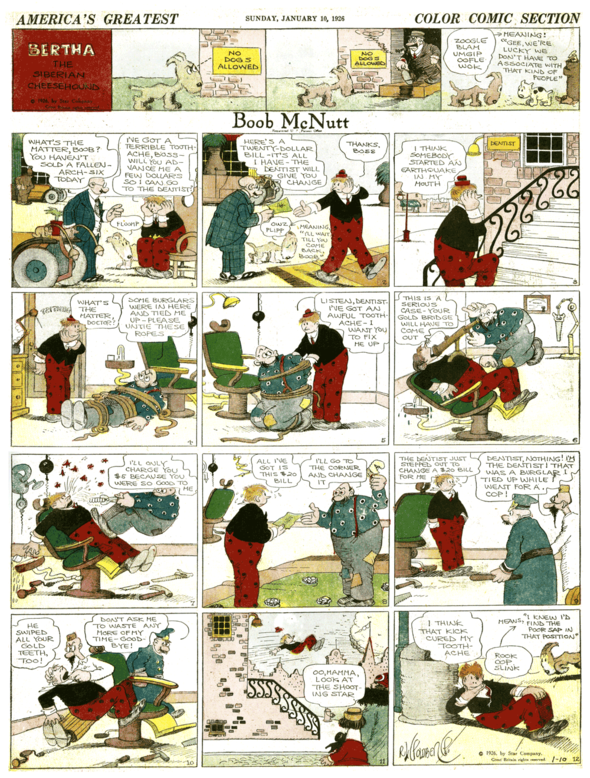 BERTHA THE SIBERIAN CHEESEHOUND hung around for a while until Bill kicked her out on 11 July. 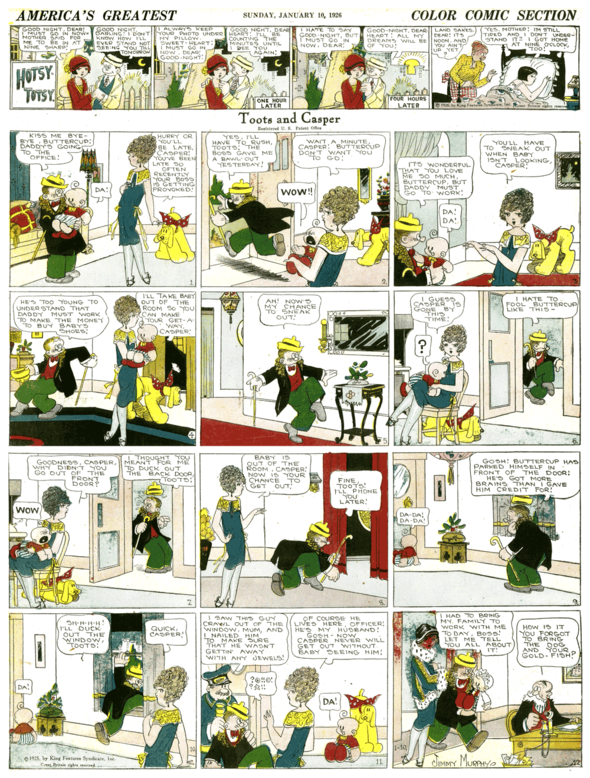 HOTSY-TOTSY was sort of a Dumb Dora knock-off, but was replaced by
the family comedy It’s Papa Who Pays on 25 April. 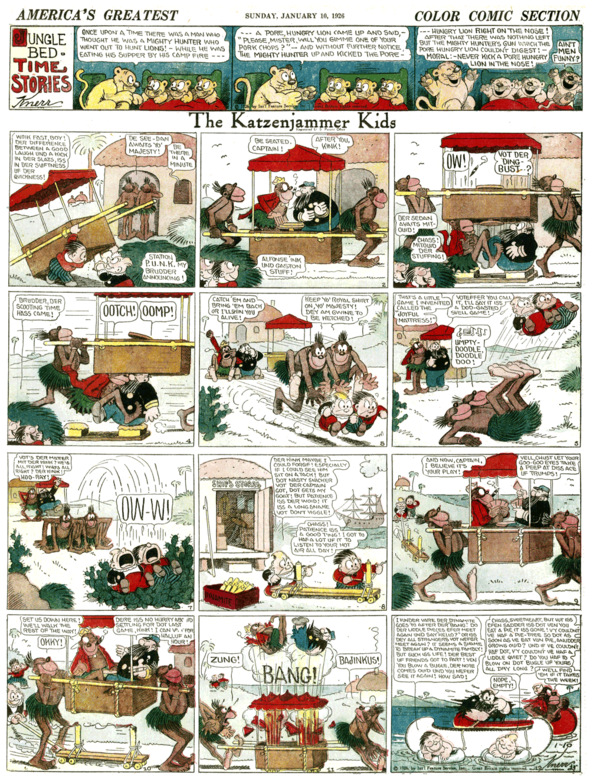 JUNGLE BED-TIME STORIES was a typically talky Knerr strip of the 1920s, replaced by Herr Dinglehoofer on 16 May, after a one-shot called “Naughty! Naughty! On 9 May. 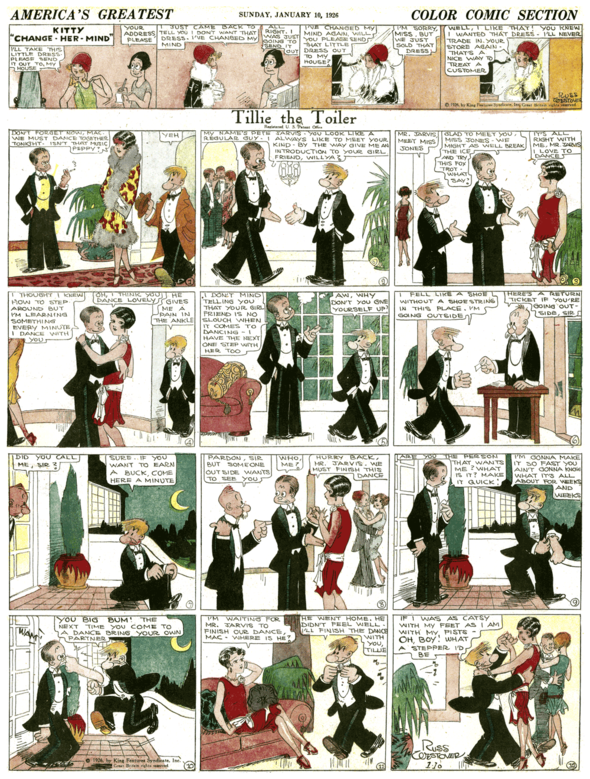 KITTY CHANGE-HER-MIND only lasted until 14 March. Tillie’s pagemates would more famously be
The Van Swaggers and Aunt Min later on. 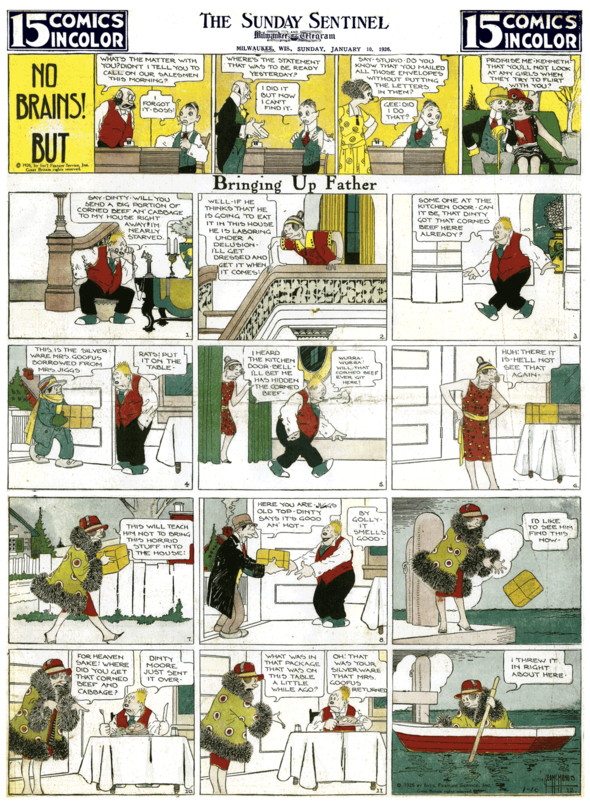 NO BRAINS, BUT- was an unusually unappealing McManus series, replaced by the even less memorable Good Morning, Boss from 16 May to 6 June, and finally
bringing back old favorite Rosie’s Beau on 13 June. 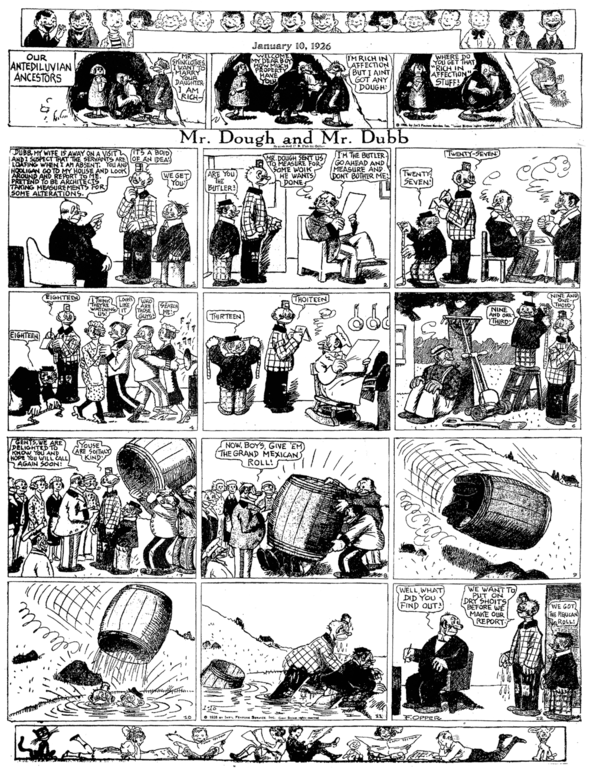 OUR ANTEDELLUVIAN ANCESTORS accompanied Opper’s page (which could go from
one of his stable of characters to another, or include combinations of them) until 16 May,
being replaced with a new “And her name was Maud” series. 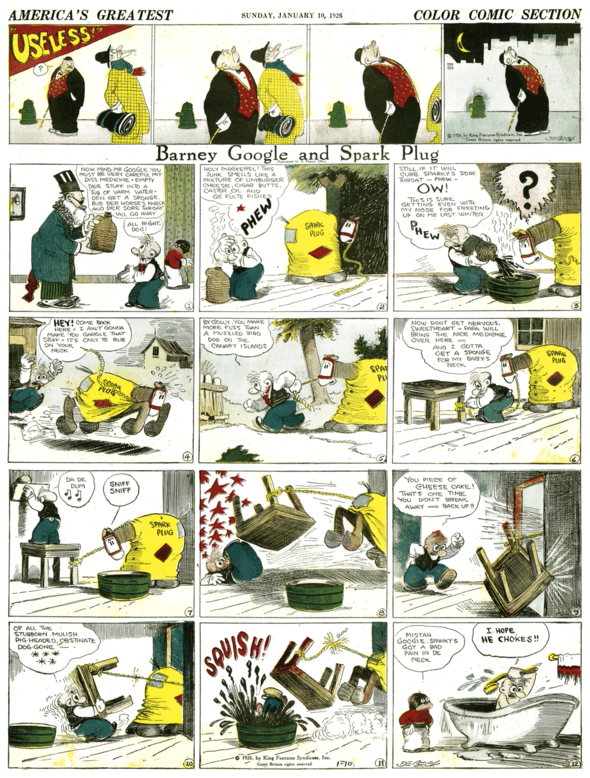 “USELESS” was one of the least useful of the top strips, having appeared once,
before being replaced by Bughouse Fables the following week.

Years ago, the Weekly Service didn’t much concern itself with comics; mainly there was a page or two of feature, or rather, non-hard-news photos, short stories and puzzles. Maybe an editorial style cartoon about high prices or the weather might be offered. There were lots of magazine-style items in the same vein as the Hearst chain’s American Weekly Sunday supplement. Same style artwork, same type fonts, etc. The papers I’ve seen that had “Here And There” were smaller city papers that used them without any special place inside.

I think an obvious drawback was that in those smaller venues you’d find such a large size cartoon took up too much space in a low page-count publication.

Yes, the prices for goods seen in old papers can sometimes be breathtaking. It’s hard to believe that once, a two-pound can of coffee went for 54¢, a new model Studebaker sedan went for $810, and postage was 3¢ a letter. But also remember that in 1941, a decent job might bring home only $50 a week.