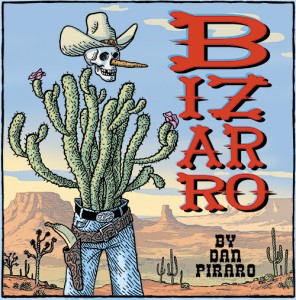 (Click any image to make your embiggenation dreams come true.) 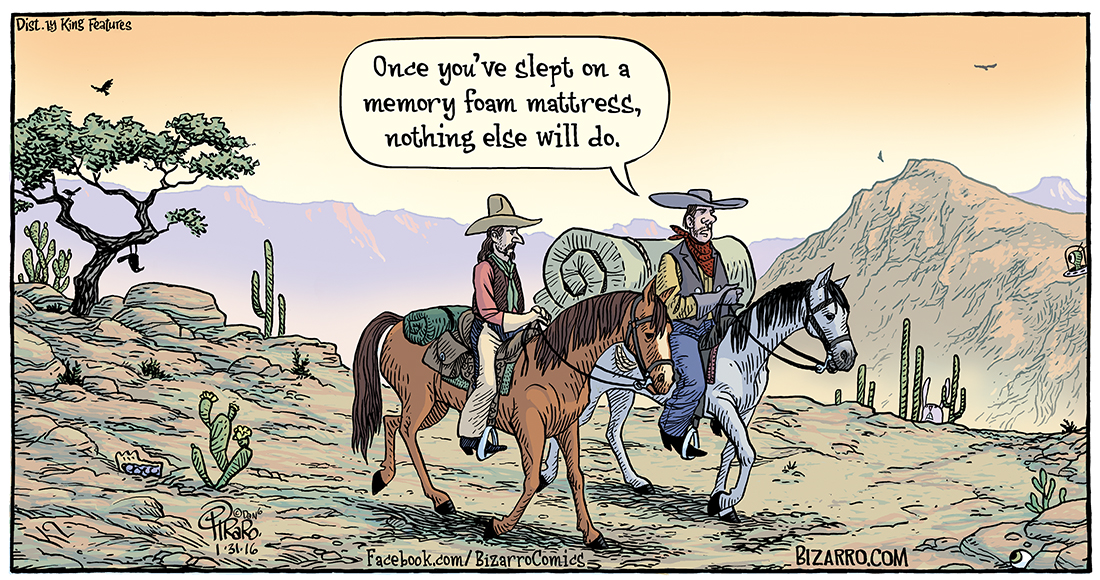 Bizarro is brought to you today by Remembrances.

I’m a big fan of memory foam mattresses. I’ve slept on all kinds of things and tend to have an achy back (because I am a male Homo sapiens past the age of 35) and memory foam is by far the best for me. They are very strange to try to pick up or move, however, because they are much heavier, floppier, and denser than a traditional mattress. Picking up a queen-size memory foam mattress is not unlike trying to move several adult human corpses stuffed into a gigantic sandwich bag. And the answer to your next question is yes. 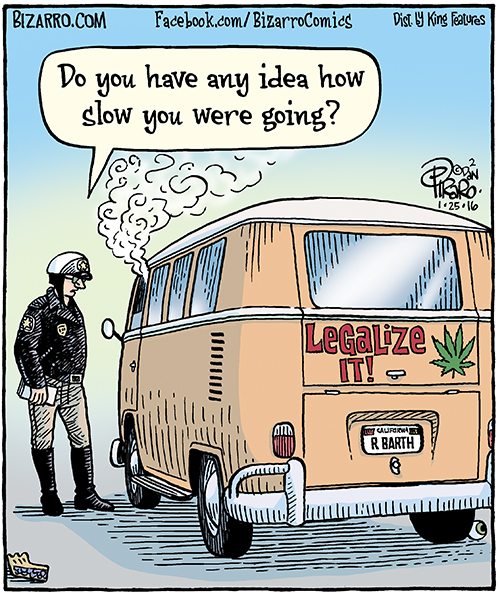 Here’s a cartoon that was suggested by a friend of mine in Canada by the name of Russell Barth. He’s been a prominent advocate for the legalization of marijuana for a long time and is seeing his vision come true bit by bit. If you’re still against it or on the fence about it, keep in mind that the overwhelming majority of bad things you’ve heard about marijuana has been propaganda. Unlike alcohol, it does not make people violent or give them false bravado (and the notion that they are capable of driving safely) nor is it a so-called “gateway drug” to harder substances. People who are programmed to become serious abusers of hard drugs abuse virtually everything, including chocolate and Cheetohs. Marijuana will not make the average person move on to meth or heroin, just as having a beer with dinner will not make the average person start drinking bourbon for breakfast and lunch. I say THANK GOD our society and government are finally beginning to mature enough to realize the absurdity of its categorization as a dangerous drug and are beginning to legalize it. I just pray we have the sense to let people who were caught in that idiotic web out of jail instantly and without a lot of red tape. 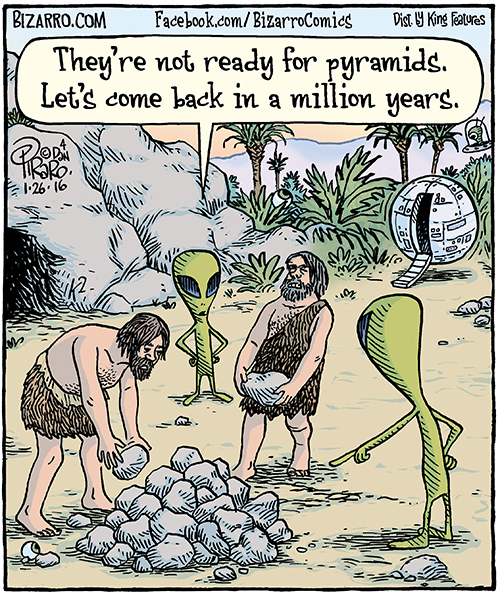 Perhaps you have heard the entertaining theory that aliens instigated the building of the great pyramids in Egypt. I wasn’t there and can’t claim to know the truth, but I do know that humans have an insatiable desire to explain things and we often don’t let an utter lack of plausibility stand in our way. 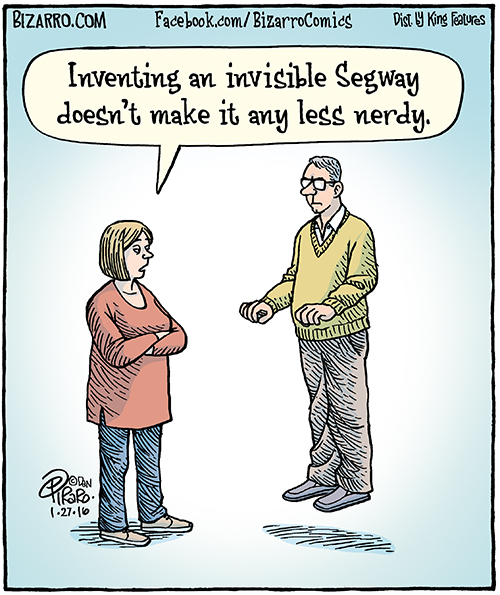 In spite of what this cartoon might lead one to believe, I’m a big fan of Segway scooters. I don’t own one––or even want to own one––but I’ve fooled around on them a few times over the years and they’re really fun. That doesn’t stop them from being undeniably nerdy, though. I can’t say why, exactly, but they just are. When they first came out, the New York Police Department bought a bunch for cops to use inside Central Park. Not too long after, however, they discontinued them and the word on the streets was that cops on Segways weren’t being taken seriously. I suspect they knew this because people were pointing and laughing. 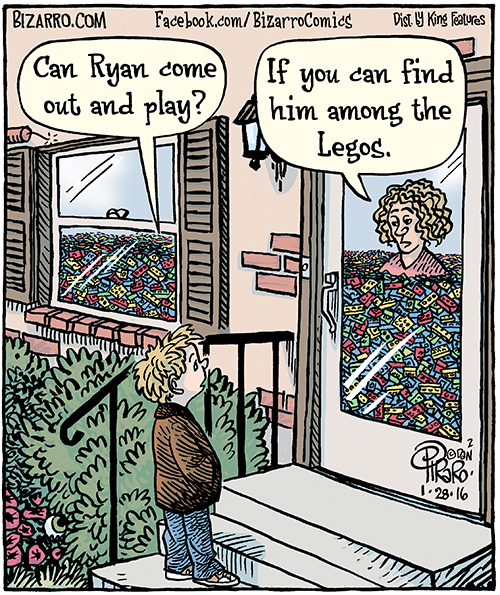 This cartoon came from the fact that I know a few kids who have so many Lego toys that their parents have dedicated what used to be the guest bedroom entirely to them. There isn’t even room for a bed anymore. It seems to me that kids these days have far and away more toys than kids did when I was young. Or, maybe I’m just hanging out with wealthier children now. 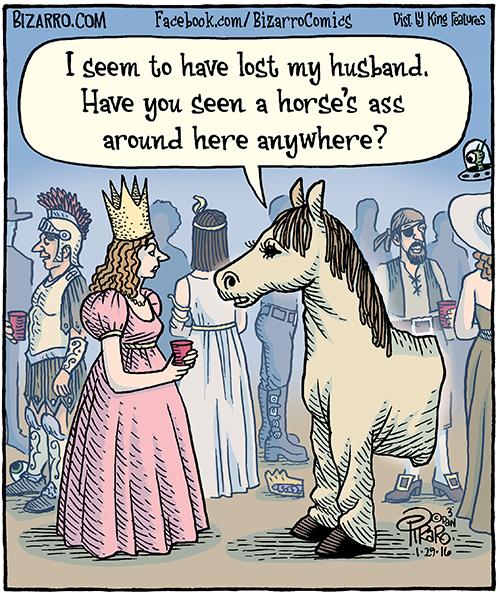 I’m still amazed that I got the term “horse’s ass” into the funny papers. American newspapers used to be so Victorian about language in the comics that this kind of joke would not have been published by all but a very liberal few newspapers. I’m thrilled to say that’s no longer true. Here’s another “racy” gag I published a few years ago. 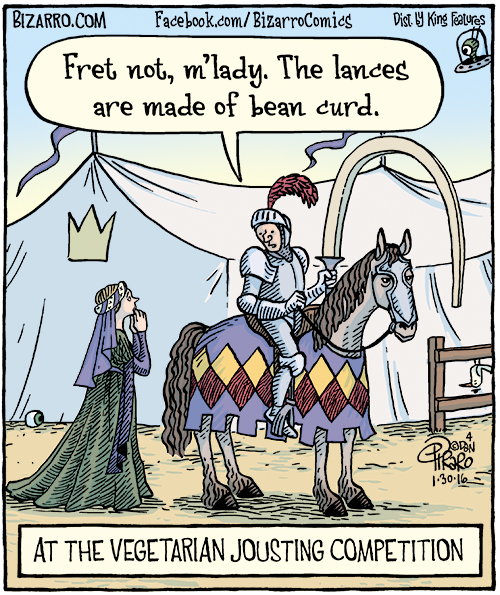 This final cartoon today was inspired by tofu, something I’ve never been overly fond of. Come to think of it, tofu is very reminiscent of the stuff memory foam mattresses are made of. Perhaps I should have said in the first part of this post that moving a memory foam mattress is like moving a gigantic slab of exceedingly dense tofu. Not that I’ve ever done that.

That’s all for this week’s cartoon cavalcade of crap. See you next Sunday, Jazz Pickles!

QUICK REMINDER: An art gallery in LA is offering signed, numbered, limited-edition prints of some of my favorite Bizarro cartoons. Talk about a unique gift! Holy Moses! Click these blue letters to see them now!