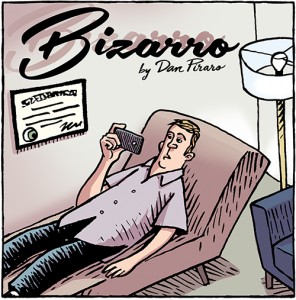 (To add embiggenation to these cartoons, click any pinkish color within any image.) 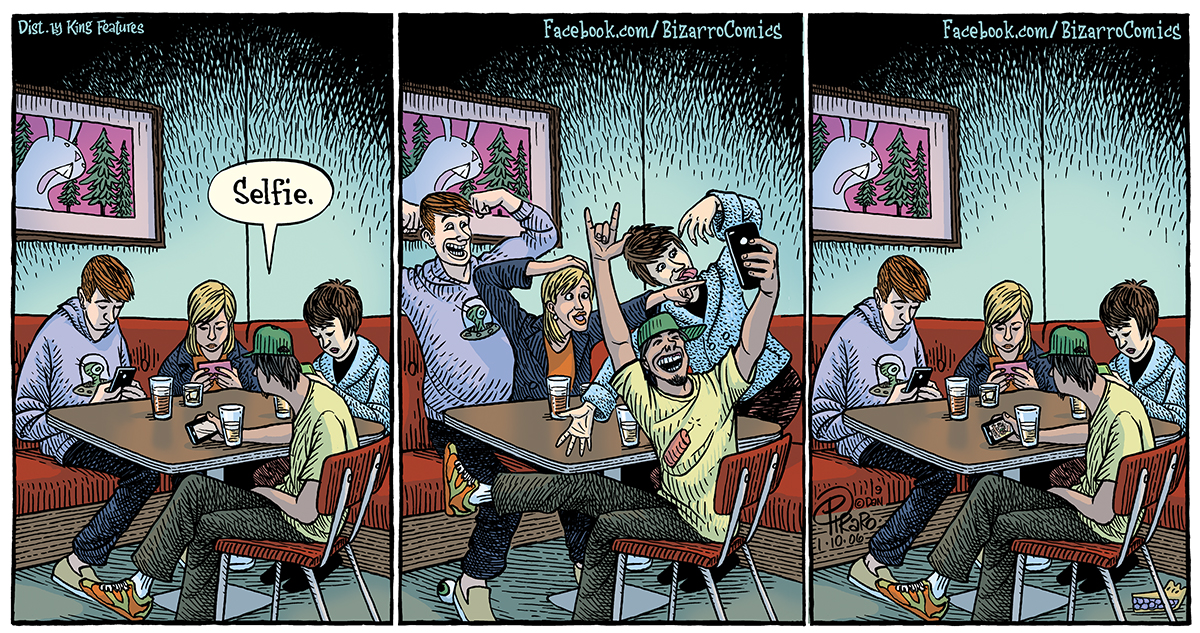 Bizarro is brought to you today by Precious Moments.

I almost never write cartoons based on actual experiences but this one is an exception. I was sitting in a cafe one day having lunch with my beloved Olive Oyl, and in a booth in the corner was a young millennial couple doing what young lovers that age do: staring into their cell phones and completely ignoring each other. (This is the new look of courting, and wow, is it hot.) Suddenly, the young man said quietly and blandly, “selfie,” and they both came to life like corpses hooked up to a generator. They posed as though they were having the wildest time two humans could muster without being arrested, held it for 2.4 seconds, then went back to their cell phone comas as though it had never happened. I don’t think they spoke another word to each other or moved more than a degree or two in either direction until they left. I whispered “thank you” to the universe for dropping such a perfect cartoon into my lap.

I’m also quite fond of the title panel above. It was cobbled together from an old cartoon that had a caption but I think it stands just as well by itself. The original cartoon is beneath the “Precious Moments” link above.

But what about the rest of the cartoons from last week? Let’s review: 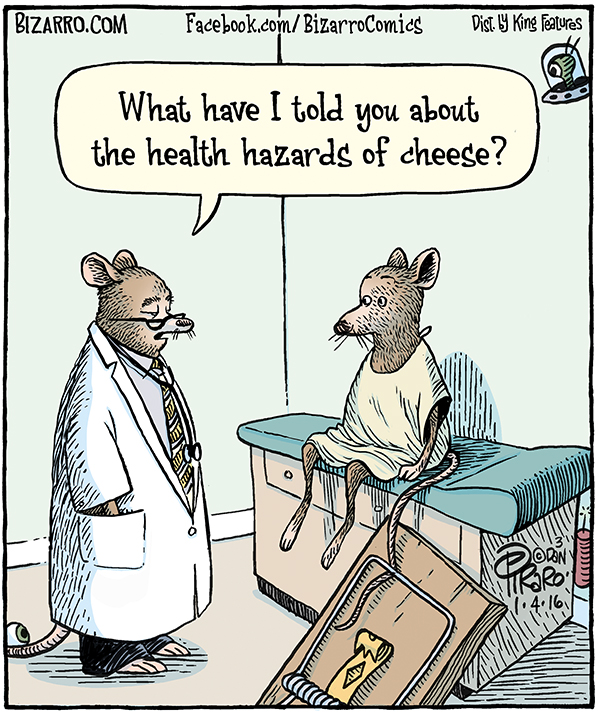 Here’s a cute little funny about a rodent who has fallen victim to a medieval boobytrap. Painful, yes, but it could’ve been worse. 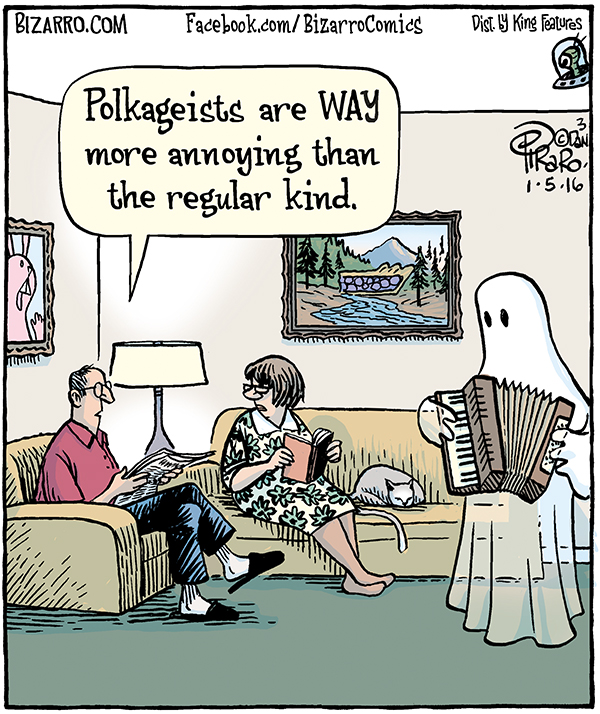 I actually like accordions and I don’t believe poltergeists (or poultrygeists) but having one of these things in your house would be a real inconvenience. After you’d showed it to all your friends and had a good laugh, that is. 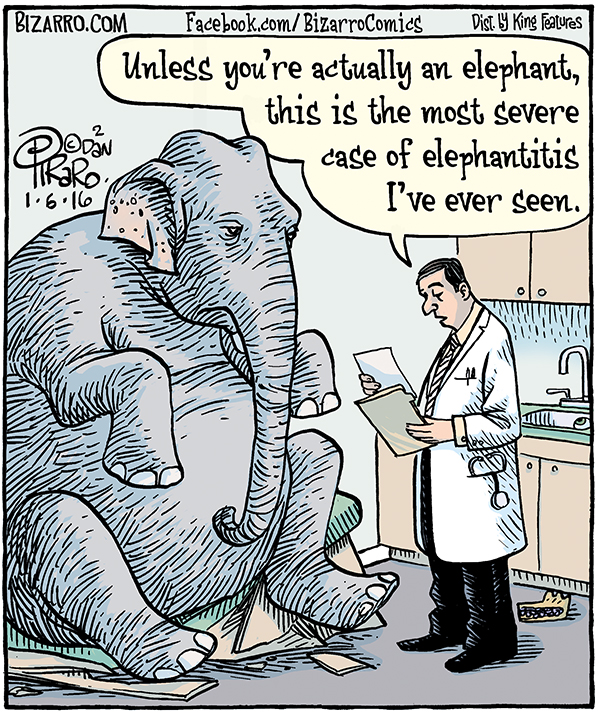 As a handful of good samaritans and a couple of sanctimonious oafs told me, there is no such thing as “elephantitis.” The correct term is “elephantiasis.” I admit I’ve never heard or read the correct term, I’ve only heard of elephantitis, so it was an honest mistake. However, even if I had known the correct term I’d likely have used the incorrect one because it is my belief that this is the common vernacular, and since I’m writing a cartoon and not a journalistic piece, I like to use the form most readily recognized by most people so they get the joke quickly and don’t have to wonder what it means. Here’s a favorite old cartoon of mine that also uses an incorrect medical term or two. This cartoon got a fair amount of attention on social media. It’s a truly brilliant pun and I wish I could take full credit for it. It was the brainchild of my good friend and occasional collaborator, Cliff Harris The King Of Wordplay. Puns can be an “easy” form of comedy and one that is widely disrespected as a result of that, but in my opinion a truly clever and surprising pun is a treat and Cliff’s are routinely the best I’ve come across. This one verges on genius. If you like wordplay, Cliff has recently published his first book and it makes an excellent little gift, coffee table accessory, or bathroom reader. Buying a handful of these will be doing a good turn for a wonderful guy! 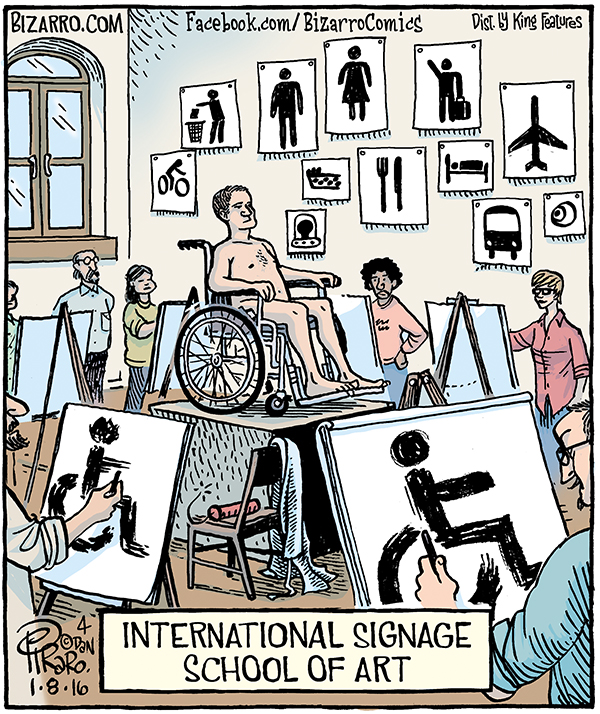 Anyone who has attended art school had been in a room like this with a naked person standing on the platform in the middle. I got to thinking about it one day and a stray neuron fired off in my noggin that combined those utterly sterile, graphic figures used on signage with my memories of college art classes. I like the result a lot. Here’s an older Bizarro cartoon about modeling class that I still love.  (Trivia buffs: I make a cameo appearance in this cartoon as the guy at the right border in a blue shirt, and my beloved Olive Oyl is the gal in pink, just under the eyeball on the wall. I have no idea who the rest of these people are.) 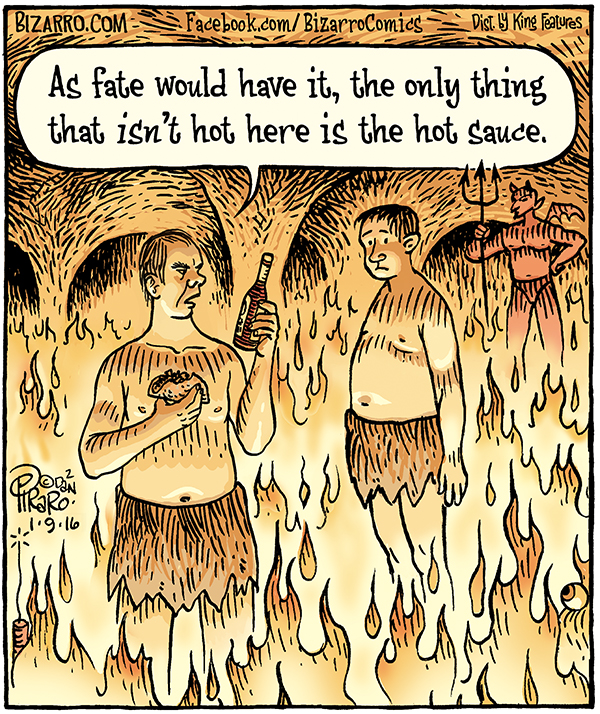 If you’re a big fan of spicy food, as I am, you are likely annoyed when you eat at a Mexican restaurant and everything is geared toward sissy tourists who buy “mild” hot sauce. Yes, that’s right, I called people who can’t stand spicy food sissies. Wanna make something of it?

That’s it for this week’s cartoon review, Jazz Pickles. I hope 2016 is rocking your Good Times van in a serious way.