(If you wish to embiggenate any of these images, use your clicky device.) 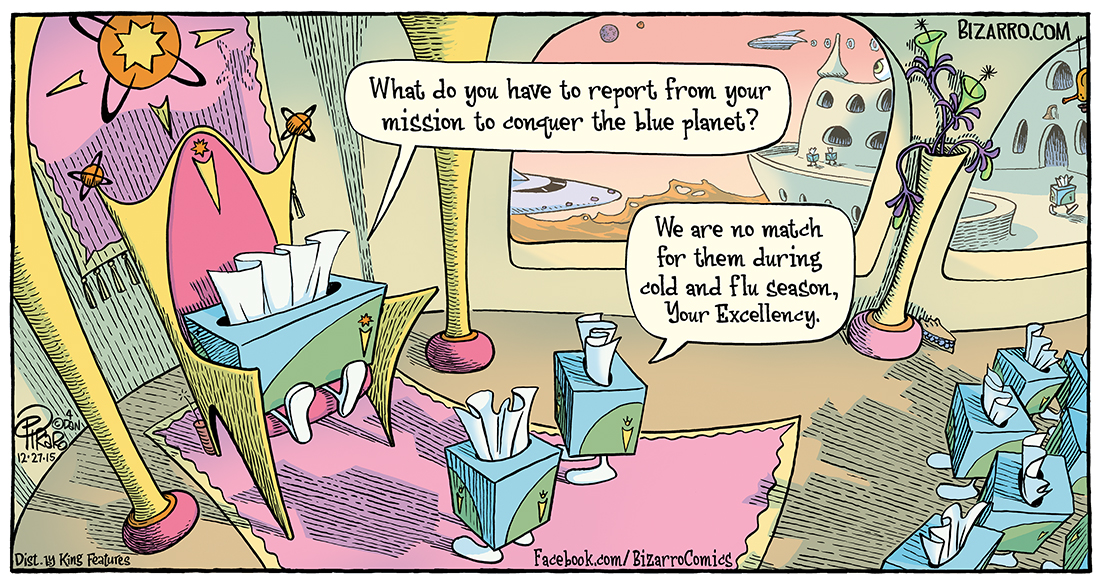 Bizarro is brought to you today by When Parking Lots Have No Lines Painted On Them.

Today’s cartoon is about a world in which the natives cover their nudity with boxes. You and I may think that naked tissue is not worth covering, but they consider it vulgar and who are we to judge? We consider the sight of human nipples to be a crime, but only if they are attached to a female. Doesn’t matter if they are attached to large breasts or ones as flat as sheetrock, if they’re attached to a female: illegal to expose in public. The Tissue People find this concept utterly ridiculous but then they’ve always tended to be a bit “judgy”. 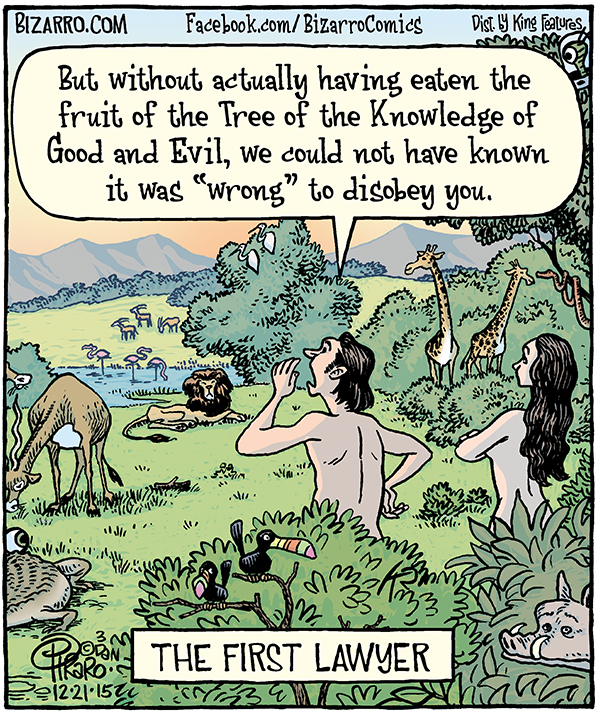 I am a lifelong student of religion, as it is differentiated from spirituality. “Religion” is the construct of rules, myths, and methods handed down through history, as opposed to the mystical experiences a person may have in their own mind or heart, so a person can be religious (the rules part) without being particularly spiritual (the mystical mind/heart part). Wars (and terrorism) are always about religion and never about spiritualism. This cartoon is about the creation myth in the Christian Bible’s Old Testament, the Torah, and the Koran or Quran, if you prefer.  (Yes, they are pretty much the same collection of writings with some minor differences here and there. The word “minor” in that last sentence refers to things that people have a long tradition of killing each other over.) Anyway, the particular bit of logic contained in the cartoon above occurred to me and I think it might well hold up in a court of law. If you don’t yet understand the difference between good and evil, how can you know it is “wrong” to do something? (I know this makes a few of you readers want to explain the theology behind this in the comments section. Go ahead if you must, but don’t expect me to be swayed.) Whatever your beliefs, I hope you got a smile out of this concept.

Here’s a cartoon that is a thinly veiled metaphor for life. When we are children we tend to think our problems will be solved simply by being an adult. Once we are adults, we find out over and over again how foolish that supposition was. 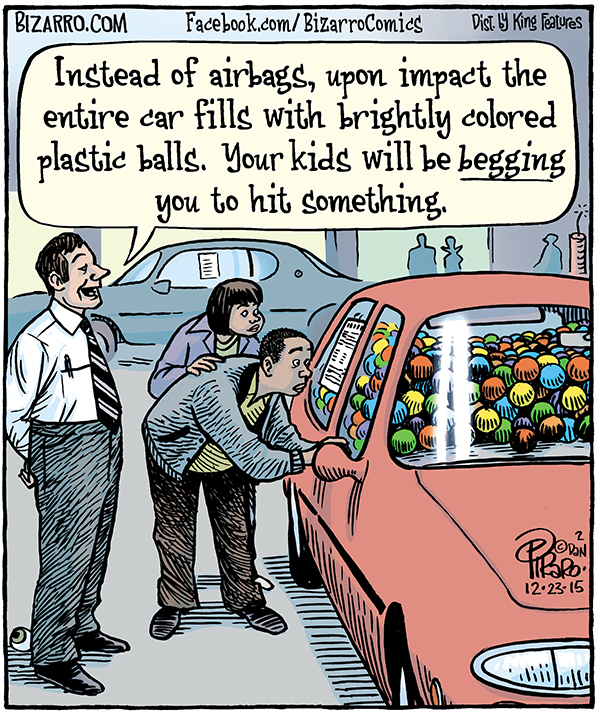 I know I have many readers in other countries and it occurs to me that some of you may not have what we in the US call “ball pits”. That does not refer to the rare medical condition of having your scrotum growing from your armpit (scrotusaxillariaus) but rather a small enclosure filled with plastic balls that small children play in. One almost always finds these at indoor play areas because an outdoor one would be impossible to keep clean and dry and it would be only a short time before badgers learned to hide at the bottom and rip into unsuspecting children. 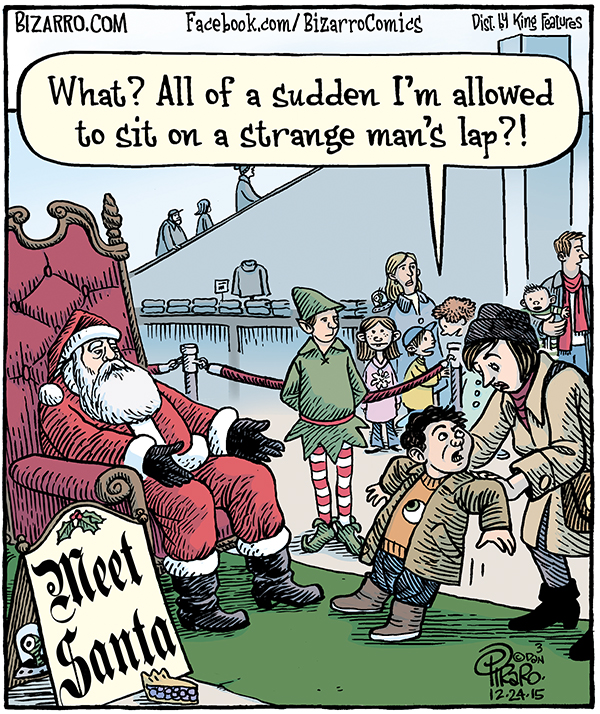 Department store Santas have always creeped me out. The first time my parents attempted to push me toward one, I screamed in terror and went home crying. Yes, I was one of those children. 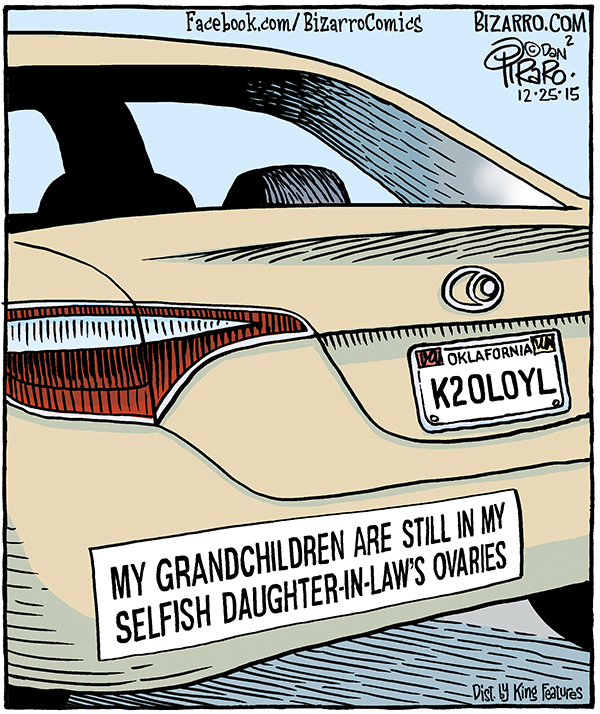 I got a few messages and emails about this cartoon. Two were from women who were offended by it because they believed I was siding with parents who pressure their children to give them grandkids. I appreciated their comments (both were polite about it) and I told them that I was actually lampooning overbearing parents. I have two adult daughters and neither thinks they want to reproduce, believing that the last thing this planet needs is more humans. I agree with that, though I will also support them if either decides to have a kid.

The other messages and emails I got about this cartoon were folks asking what the license plate means. K2 is for my two daughters, whose names both begin with K (Krapuzar and Krelspeth) and OLOYL stands for Olive Oyl, which is my nickname for my special ladywomanpartner. (We’re too old to feel comfortable with “girlfriend” and we’re not yet married.)  As for the state name, I was raised in Oklahoma but now live in California. Just having a little fun with insider “shoutouts”. 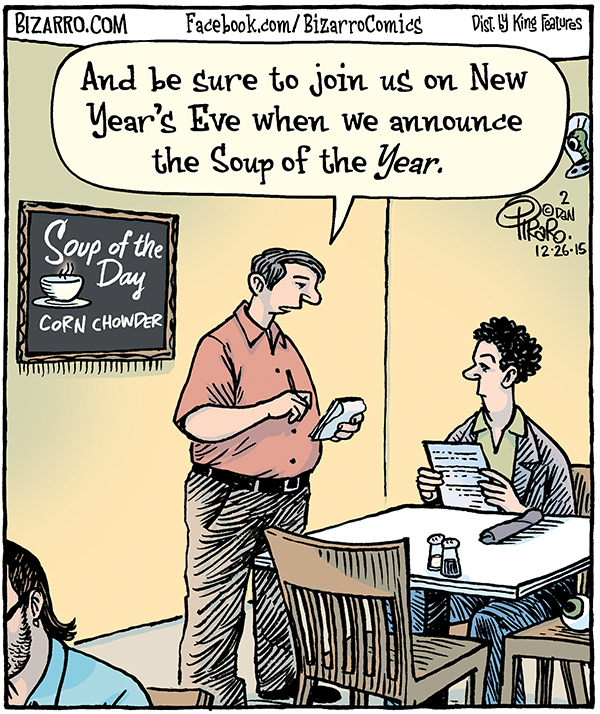 The abundance of end-of-year roundups and lists––as well as fabulous places to be on New Year’s Eve–– made me think of this cartoon. I asked myself what could be the most trivial end of year commemoration or place to spend NYE, and this came to mind. As for me, the best soup I had all year was an Italian wedding soup at Crossroads Kitchen in LA. It isn’t on their regular menu so don’t go storming in there today demanding a big to-go container of it and telling them I sent you. That would be embarrassing.

That’s the weekly round-up. I hope all of you Jazz Pickles had a low-impact holiday season with minimal casualties and don’t have to return to work until January. My boss is such an ass that I don’t even get New Year’s Day off. :^{