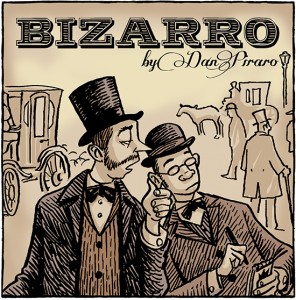 (To begin the enbiggenation process, click any article of footwear.) 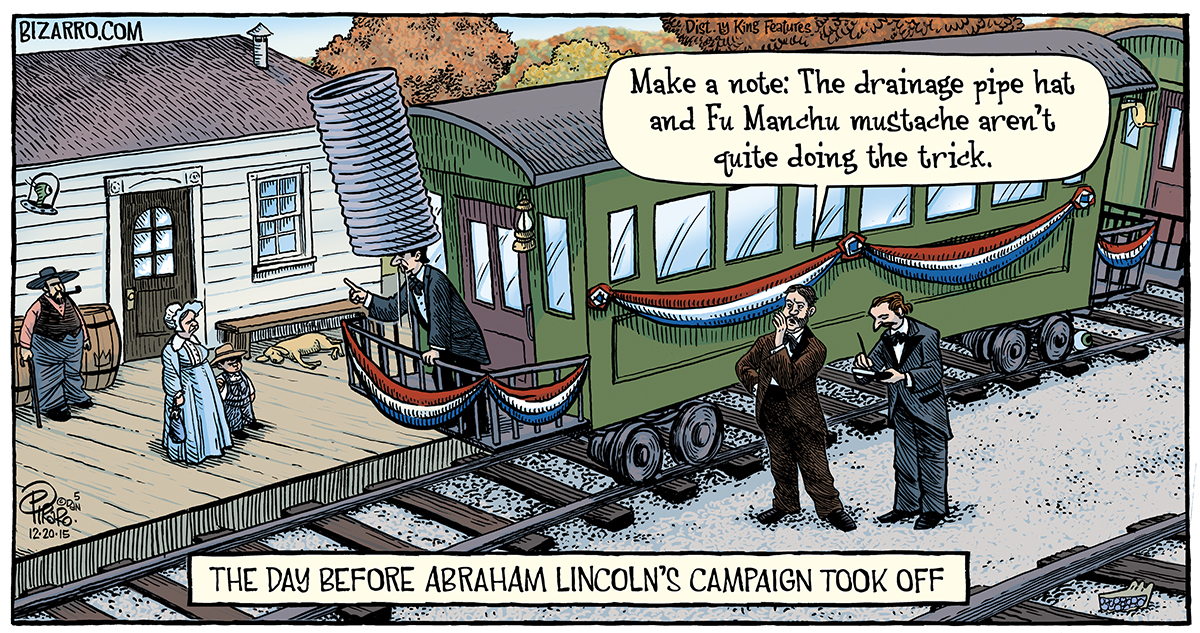 Bizarro is brought to you today by Religious Bizarro Christmas Cartoon.

Since we’re in the midst of another horrifying presidential campaign cycle here in the US, I thought a look back at our history might be in order. It is tempting to think that politics have only recently become more about good advertising than good policy, but I suspect that has always been the case. Most voters don’t have the time, education, or brains to research all angles of our current geopolitical situation and pick the candidate with the best ideas for moving the country forward, so we pick the one we “feel” best about. If Abraham Lincoln had worn the items depicted above instead of a normal beard and a stovepipe hat, he would almost certainly have lost the election and, who knows, human slavery might still be legal in the U.S.  I can think of at least one current candidate for president who might not object to that, and he has something on his head almost as ridiculous as a drainage pipe. Let’s hope that (and his unabashed bigotry) keep him out of the White House.

The rest of the cartoons for this past week looked very much like this: 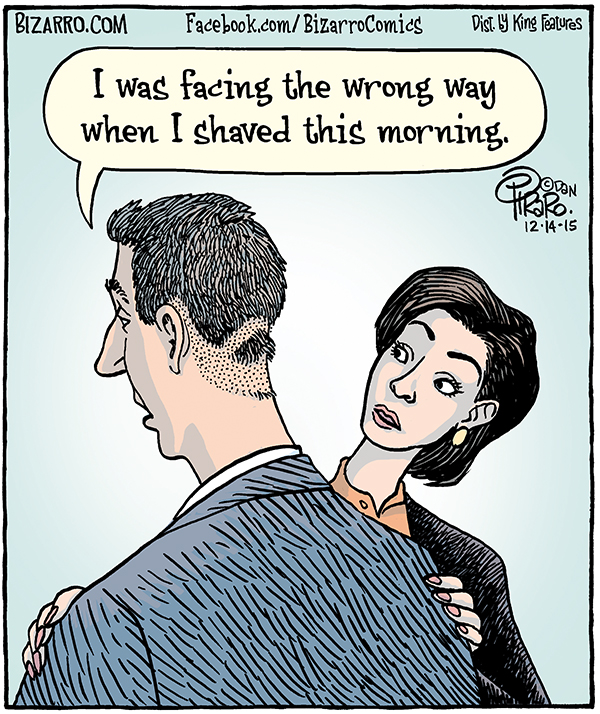 I love odd little ideas like this one. It’s not hilarious, I know, but it invites a certain surreal thought process that challenges the things we take for granted. At least that’s what it does for me. If I had to live in the world exactly as it is without any room for bizarre fantasies like this one, I’d go crazy from boredom. 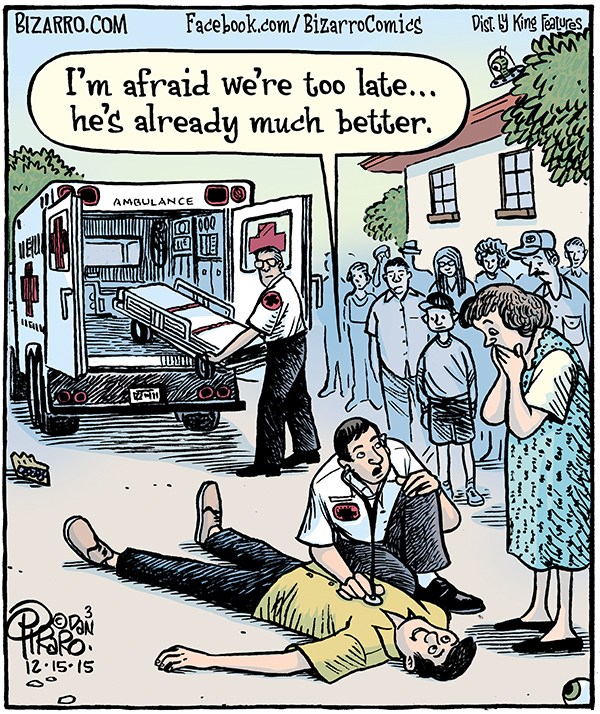 This cartoon simply challenges (and puts a positive spin on) the concept of an ambulance being “too late.” The older I get, the more I find that happiness in life is often more about perspective and context than events.

I got a respectful note this week from a firefighter who didn’t care for this cartoon because it reminded him of the unfortunate souls who jumped from the Twin Towers during the 9/11 incidents. I didn’t think of that when drawing it, I was just finding a humorous way to look at the big trampoline thing that firefighters used to use (does anyone still do this?) to catch people trapped on floors above a fire. It’s a dark topic, no doubt about it, and though I firmly believe in the effectiveness of dark humor to relieve our anxieties about life’s inevitable tragedies, I always regret it when one of my cartoons brings someone to a bad place. 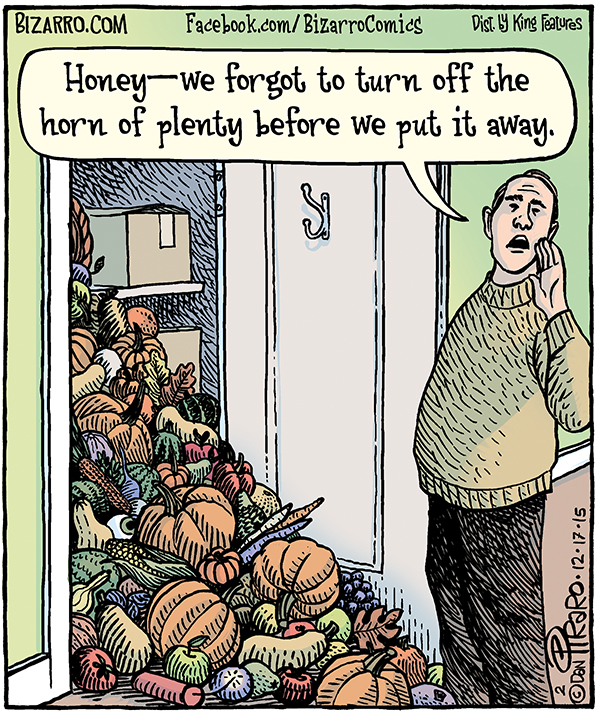 Cornucopias, sometimes called a “horn of plenty”, intrigued me as a kid. It seemed as though the cone-shaped thing was magically creating and spewing forth a wide variety of food. So here is the logical conclusion of that. It was, by the way, a giant pain in the ass to draw, for which I was not thankful. 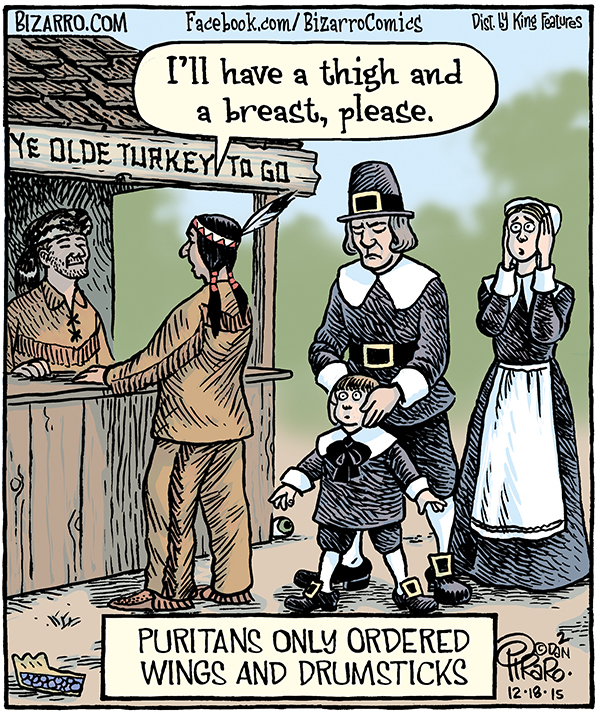 I am by no means a libertine––far from it––but I’ve always found the puritanical side of modern America both ridiculous and frustrating. I know from personal experience as a child and as an adult raising two daughters, the more kids are sheltered from the basic truths of sexuality (good and bad), the more likely they are to suffer the consequences of poor choices. Adding some strict, religious notions to the mix only make it worse. In the U.S., a split-second glimpse of a woman’s nipple on network television can start a controversy that lasts for weeks and result in people losing their jobs, but you can show almost any act of violence without raising an eyebrow. It is insanity and the results of this kind of a society play out in the headlines daily. 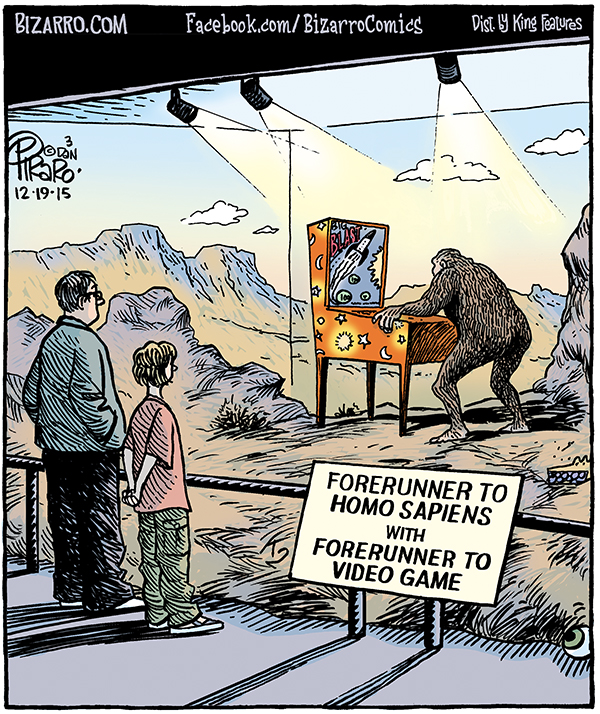 I was musing about those strange, unnatural exhibits in natural history museums and this occurred to me. I don’t know if it is funny.

I hope the holidays are not giving you too much trouble, Jazz Pickles. They can be fraught with peril, to be sure. As for me, I try to keep it simple and avoid as many decorations and annoying songs as I can. It’s a challenge, to be sure. I am not, however, above wishing all of you a lovely visit with friends and family, some enjoyable time off, and some good sex. See you next week, if I survive “the most wonderful time of the year”!