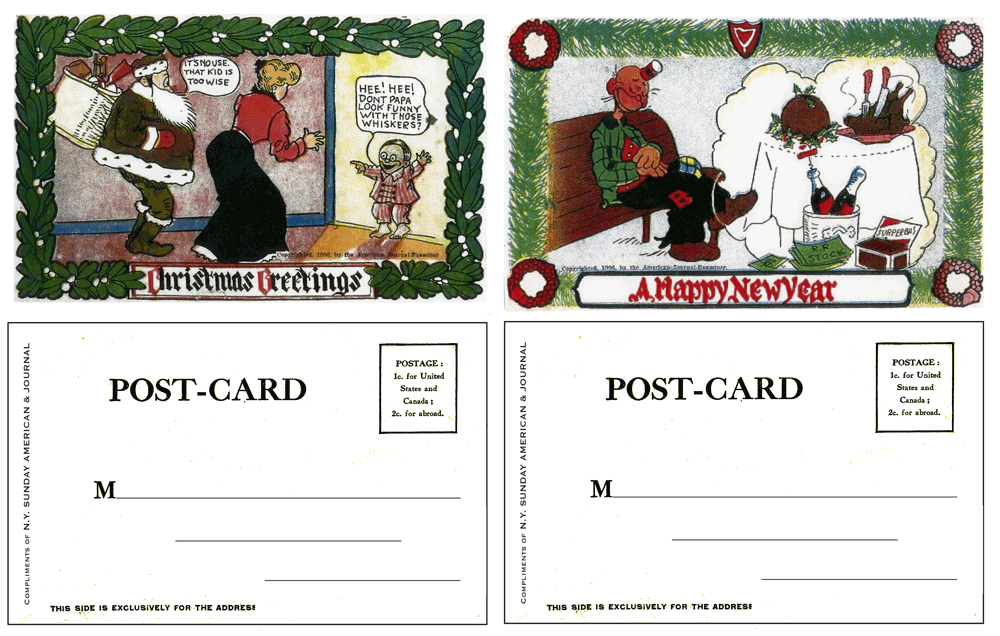 Just dropping you a line on a type of comics intended for your mailbox.  Perhaps you are unaware of the story of or the place of post cards in social history, but they were once a significant phenomenon.

In the later years of the nineteenth century, post cards were created, but these were at first only the government-printed variety, with a printed stamp and legend on an address side, and a blank message side on the obverse. In the late 1890s, some geniuses took said cards and printed an image on the blank side and the modern post card began. A cent was the going postal rate for a card, two cents for a letter. These cards would already cost one and a half or two cents, so they were considered expensive. In 1898, by an Act of Congress no less, non-government-produced cards to which the sender would apply a stamp instead were permitted.  And they became cheap and plentiful at a half or full cent to purchase in the first place, or even free as giveaways by advertisers.

Soon, post cards became very popular, with a vast array of designs to pick from, from ads to scenes, to gags.  By 1905 they were a national fad, or even obsession. The Europeans were no slouches either, and they were traded internationally with gusto before World War One.  Post cards were collected and saved often in albums.

Like old phonograph records or copies of the National Geographic magazine, through wars and depressions, those old cards that Aunt Bessie saved  when Taft was President weren’t really important, but they were just too good to throw away, and such things are, or at least used to be, in rich supply at flea markets and second hand stores.

Somewhere along the way, perhaps in need of an inexpensive and easily expanded hobby, the discipline of Deltiology was born. This is its ten dollar scientific name, but it might just as well be postcardology.

The Hearst presses, ever a part of popular trends in culture, made their contribution in 1906 and 1907 with several series of cards for readers, which featured their cartoon stars included in Sunday editions of the New York Journal, Chicago Examiner, Boston American and San Francisco Examiner, and possibly the Los Angeles Examiner as well. I present these cards with both sides of each.  You will notice they all have just an address side and no personal message other than short jottings along the edge of the image.  Post cards were about the same since 1898, and it took yet another Act of Congress in 1907 to allow the bifurcated address/message backs on cards we have today. 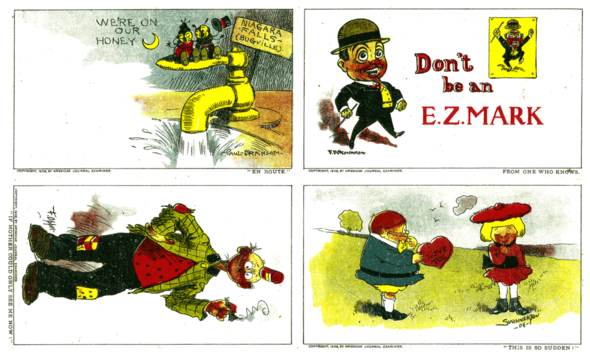 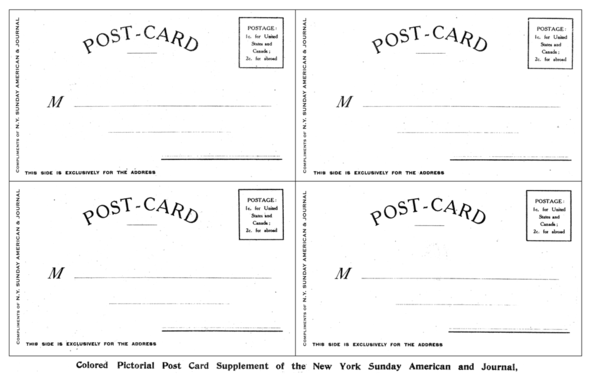 The four cards would be cut out by the reader. This set features (Clockwise) two residents of Bugville by Paul Bransom, F. M. Howarth’s E. Z. Mark, Katy by Jimmy Swinnerton and a characteristic pose by Happy Hooligan by Opper. Bugville and E. Z. Mark were weekday strips.

Maude the Mule kicks Uncle Si, and the Katzenjammer boys have it out with a schoolmate in these heat-sensitive cards that were offered later in 1906. You would at first see a blank space in half the cartoon, where a second figure would be revealed after you followed the instructions :
“Heat up this Post Card with Hot Flat-iron, gas jet or match (Don’t burn it.)”
Good advice indeed. Notice the edge of the second Katzenjammer card is singed!

In another set, this time with the images more sensibly drawn out by applying a little water, we see the characters reacting to their nemeses grimacing from the full Moon. Foxy Grandpa leers down on his frightened grandsons, and Si recoils in horror at how high Maude has gotten in the world, or off of it, in this case. Poor old Si is seen again in a 1907 series with a “magic slate” motif,
at his usual landing spot five miles from home, by way of mule kick. 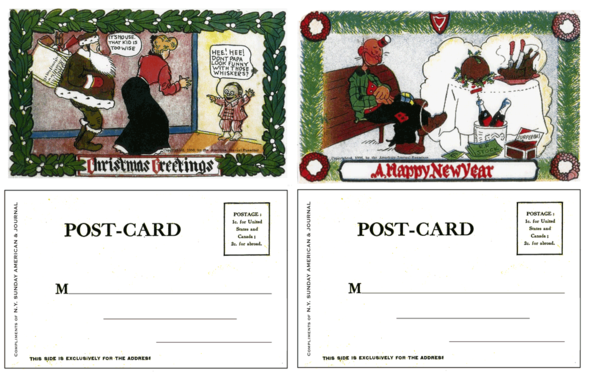 Because we’re in the season for it, I show here a Christmas set of 1906.
Above: Little Jimmy by Swinnerton, and Happy Hooligan by Opper.
Below: Buster Brown by Outcault and The Katzenjammer Kids by Dirks. 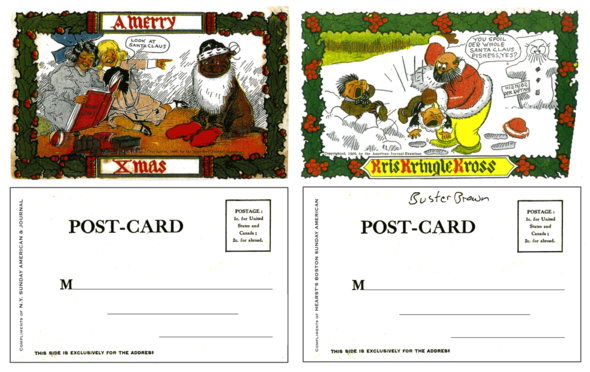 (It appears someone along the years strangely misidentified the last card).

I’ll scrape together more early cards for another session soon. Think good thoughts, and help Mother around the house, because Christmas is next week.

I will certainly ask if Glamor Girls can be added, we have a kind of choppy run, but enough to fill about a decade of entries. I’m surprised there weren’t more responses to this one, as I’d been asked a few times in the past for it, but there you are.