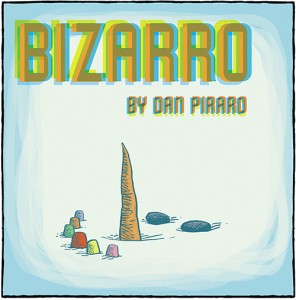 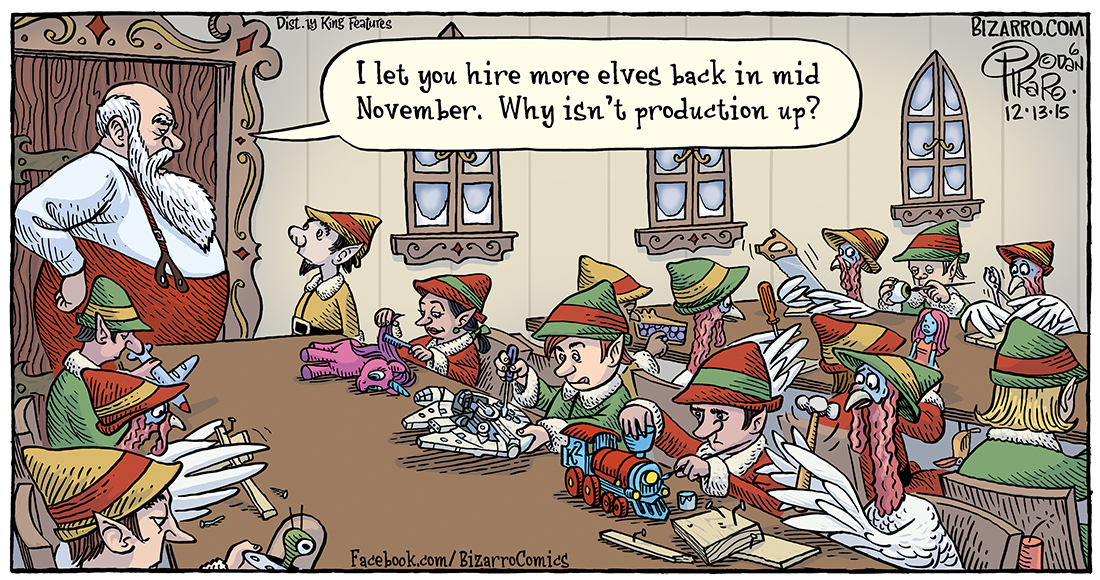 Bizarro is brought to you today by Poor Timing.

During the month of December, I’ll be featuring some of my favorite holiday Bizarro cartoons from years past under most of the blue links in my posts, so don’t miss them!

This cartoon glimpse inside Santa’s Workshop was based on a fleeting idea about turkeys posing as elves in an attempt to avoid being eaten on Thanksgiving. I’m not certain the concept is funny in and of itself, but I thought the drawing might be amusing enough to save it. I enjoyed drawing turkeys trying to manage tools with their cumbersome wings as hands. There are six of my “secret symbols” in this drawing, one of which is a toy one of the elves is working on, which is funny to me. If you’re not familiar with the Bizarro Secret Symbols, have a lookit this and be forever changed. (Sorry, that wasn’t a holiday BIzarro cartoon from the past but the next link will be.) 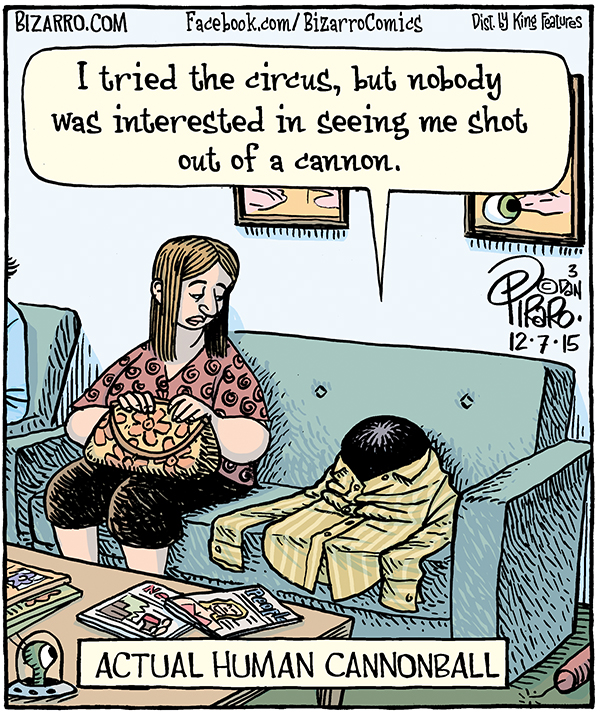 When I hear terms like “human cannonball” I often think it would be more interesting to see one like this than to see a human shot out of a cannon. When constructing this cartoon I chose to put them in a waiting room of some kind. I have no idea why. 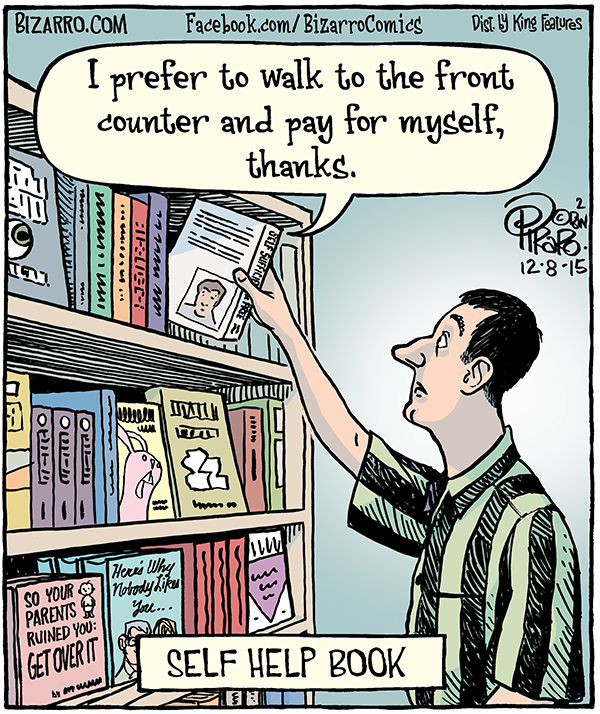 I confess I’ve read a few self help books in my day and found them to be very helpful. But if someone knowledgeable puts their wisdom in a book and it helps you change your thinking or behavior or whatever, then they are helping you. You’re not really helping yourself, right?  Perhaps I need a book that will help me let go of the literal inaccuracies of common expressions. On a side note, virtually all artists loathe drawing shelves full of products; one way I alleviate the tedium of it is to put some fun book (or product) titles in. Do you know anyone who could use the “So Your Parents Ruined You: Get Over It” book? I do. 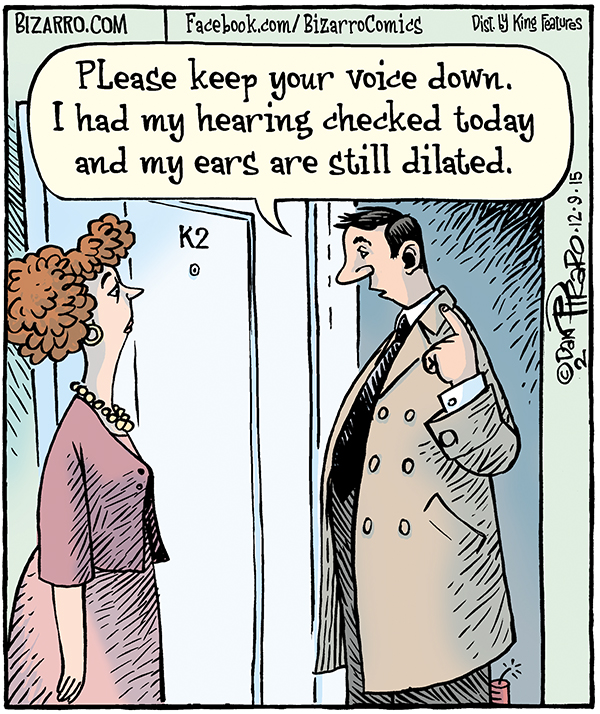 Here’s a simple gag that is a variation of getting your eyes dilated during a visit to an ophthalmologist. Since I’ve nothing brilliant to say about this one, here’s another Bizarro Holiday cartoon you may enjoy. 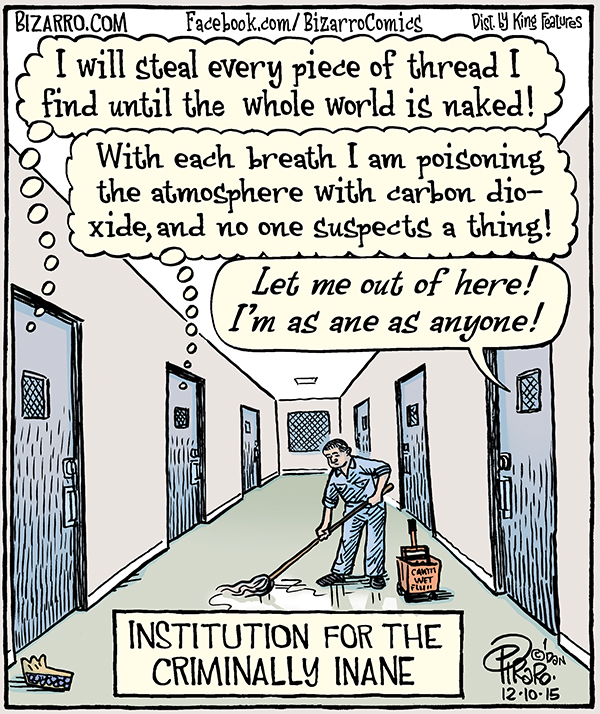 I’ve often mused over the similarity of the words “insane” and “inane,” so I wrote a cartoon about it. Coming up with inane things for the inmates to say was the most fun part. Do you consider yourself inane, or ane? I pride myself on being the former. 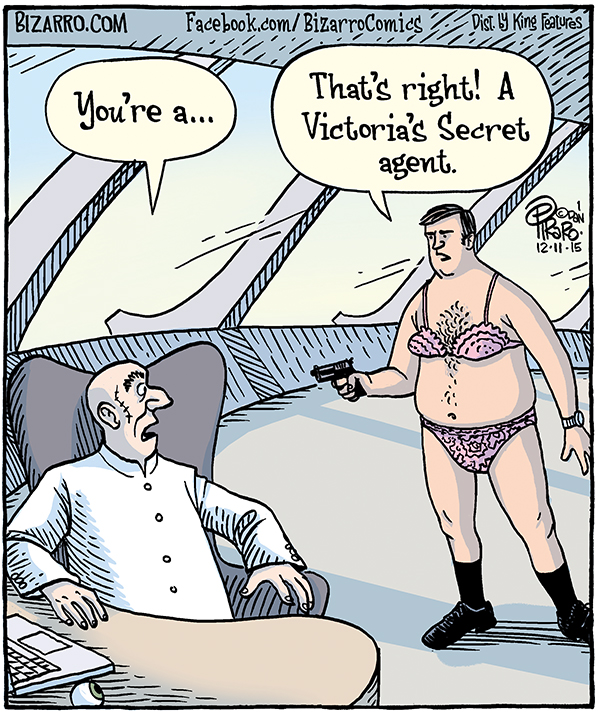 Speaking of ridiculocity, I just love my Victoria’s Secret Agent. I saw the new Bond film last week and it makes it all the more fun. 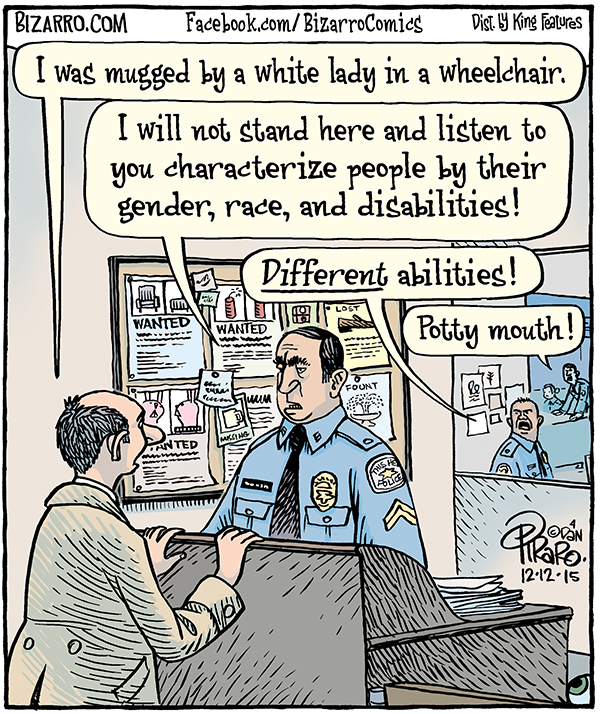 I’ve made no secret of the fact that I’m no fan of “politically correct” language. It isn’t that I want to go around using epithets or slurs, I most certainly do not. But I find the recent habit we have of taking an innocuous term that was never meant to be derogatory, like “oriental,” deciding that it is offensive and effectively outlawing and pressuring people in polite society to use a different, equally innocuous term a bit inane (callback!) Why do we fail to realize that after a certain number of years of hearing bigots use the new term, we will find it offensive, too, and move on to something else. The whole exercise, in my inane opinion (too many times!) is a red herring. I do not believe that forcing bigots to say a new word encourages them to abandon their racism. An Asian person can be denied an apartment by a racist landlord as easily as an oriental person could. The “N-word” (the word so dangerous no one as pale as I dare type it!) on the other hand, is different in that as far back as anyone can remember it has been used as an insult. I’m all for changing that. But the parade of “preferred” terms we’ve replaced it with in my lifetime alone (colored, negro, black, African American) is a bit of a red herring, too. Have members of the race in question found they are achieving income parity and that cops are treating them more fairly each time we announce a new favorite moniker? I doubt it. Plus, what do you call a person of this heritage who is from another country? African Frenchman? African Japanese? It verges on inane very quickly.

I have no doubt that some people will be offended by the paragraph above. But those are the people who think that speaking of race relations in any form other than those approved by (well-meaning) activists is racism. It is not. If we can’t use our critical thinking skills to discuss these things openly, I suspect we’ll make very little progress on what is a real problem in our increasingly claustrophobic world.

Enough of the serious!  Here’s another Bizarro holiday cartoon from days gone by!

And here is the perfect, unique, thoughtful gift for the Bizarro fan in your life. Signed, numbered, limited-edition fancy fine art prints of some of my favorite gags.