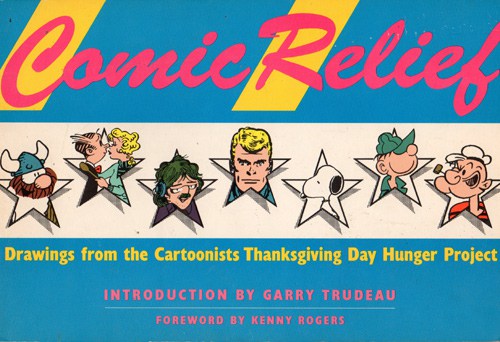 In the summer of 1985, Garry Trudeau sent a letter, which was co-signed by Milton Caniff and Charles Schulz, to 250 cartoonists inviting them to dedicate their features to the topic of world hunger on November 28, 1985. Initially worried about the response, Garry was delighted when he opened up the newspaper on Thanksgiving Day. “Over 175 artists, inspired by the impact of a concerted effort among their ranks, did something they had never attempted before – they worked together.”

Below is the Hi and Lois episode that appeared that day.

On February 22, 1986, fifty cartoonists attended the opening of an exhibit of original strips from that historic event at the Museum of Cartoon Art in Rye Brook, New York. In a four-hour session, they drew their characters holding hands on a fifty-foot mural to promote “Hands Across America,” a nationwide fundraising event scheduled for May 25, 1986. More than one hundred cartoonists from around the country also sent in drawings to add to the chain, which was reproduced in the June 1986 issue of Life magazine. The original art from the Cartoonists Thanksgiving Day Hunger Project, and the book collection of the strips (above), helped raise money for USA for Africa.

On Thanksgiving that year, we joined the nation’s cartoonists again to focus attention on world hunger.

In response to the September 11, 2001 terrorists attacks on America, National Cartoonists Society president Steve McGarry, at the suggestion of Patrick McDonnell, invited each of its members to create a special cartoon for Thanksgiving Day, November 22, 2001. More than 125 cartoonists participated in the event by providing graphic tributes to rescue workers, survivors, and those who lost their lives in the senseless acts of violence. The Network for Good website address was included in many of the strips and panels, which helped direct potential donors to relief organizations of their choice. The original artwork was also auctioned off on-line, raising close to $50,000 for the September 11th Fund. Once again, the nation’s cartoonists had used the power of their pens to focus attention on an issue of serious concern to readers.

We were grateful for the opportunity to participate in all of these event and wish our readers a Happy Thanksgiving!