In this edition, we’ll look at a strip that just passed its fortieth year last month, Crock.

In the world of parody comic strips,   Bill Rechin and Don Wilder’s was an unusual one, at least for an American comic: it was a send-up of the French Foreign Legion. Le Légion Etrangère, or “L. É.,” has been seen in Hollywood films back to the Ronald Coleman epic, Beau Geste (1926), which is still a great film ninety years later.

Since then, Percival Wren’s desperate band of men, exposed to the misery of an isolated fort in the desert, surrounded by enemy Arab cutthroats, and lead by a psychotically cruel commandant has turned into one of the great themes of twentieth century adventure stories.

The L. É. Is famed for being composed of the world’s criminals, misfits and men who need to forget, and be forgotten. The French deployed the Legionnaires in impossible places against hopeless odds like France’s disastrous adventures in 1860s Mexico, Indo-China in the 1950s, and Algeria in the 1960s.

The wretched excesses of Wren’s fictional Fort Zinderneuf is the obvious inspiration for Crock.  Other strips, both comic and adventure continuities, have done turns in the Legion, but outside of the London Star’s Beau Peep, another satire strip, I can’t think of any that has the L.É. as its permanent setting. 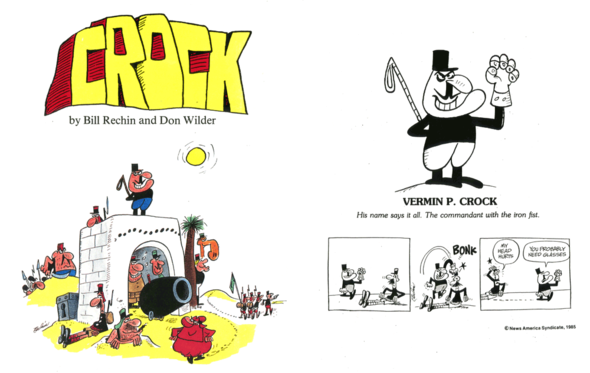 CROCK sales kit cover, 1985, and introduction to CROCK. Not keen on metaphors,
he literally had an “iron fist” that he would regularly slip on to inflict pain on his men. 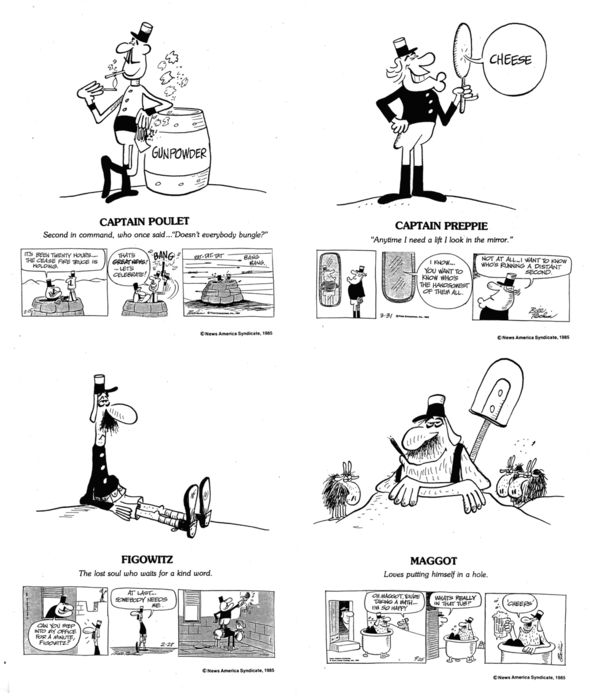 More dramatis personae: Poulet was incompetent but was of the right calibre of spinelessness
to serve as Crock’s flunkie. Figowitz was most often seen sitting on the ground
and having Crock walk over his kneecaps. 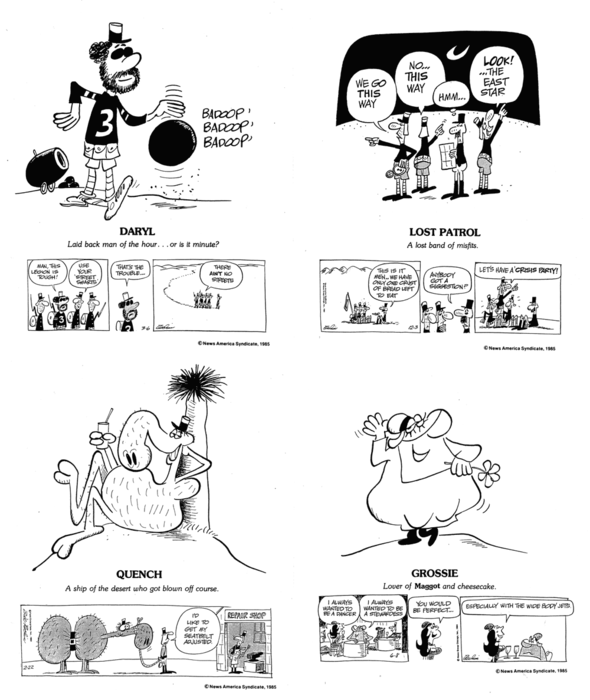 Daryl was the Lt. Flap of CROCK. The Lost Patrol never found its way out of the endless desert sands.

The characters often seem to be locked into one particular Beau Geste-type scene, endlessly  replaying it with different punchlines. Other characters include Schmeese, a spy perpetually saying his last words in front of a firing squad; two prisoners in steel hot boxes; Nebookaneezzer, a giant stone idol resembling an Easter Island head that dispenses wisdom or threats to the Arabs; two men in a forward observation tower where nothing ever is observed, etc. 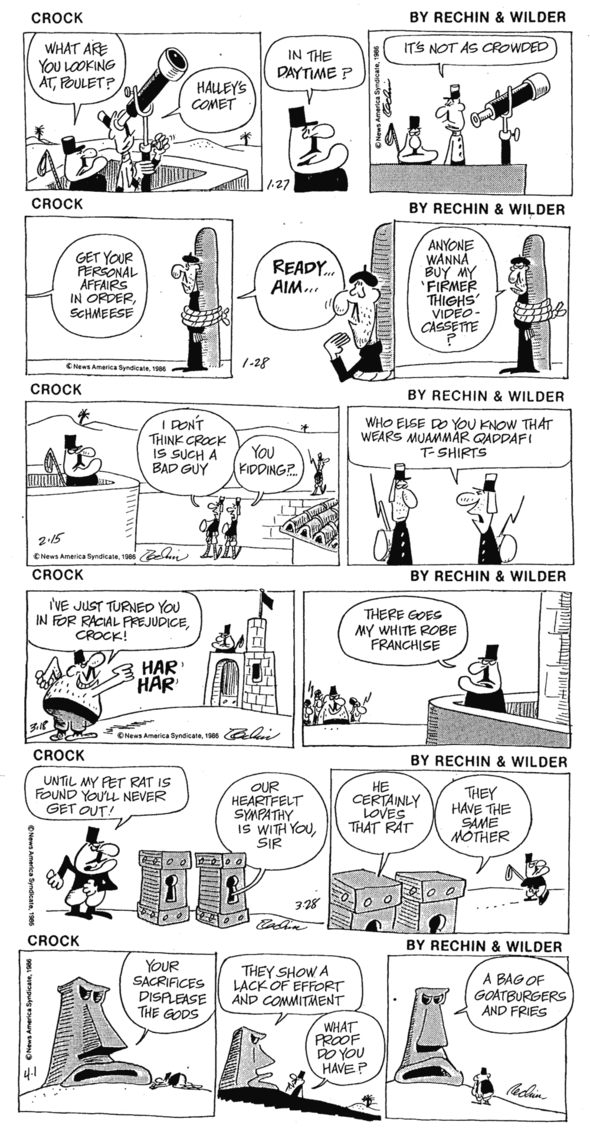 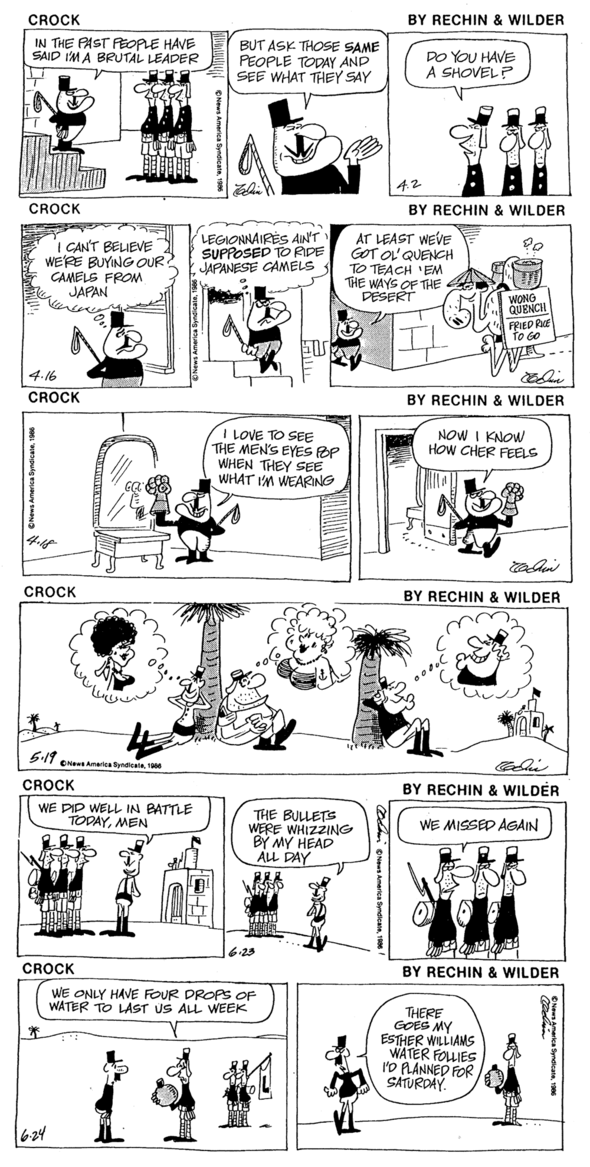 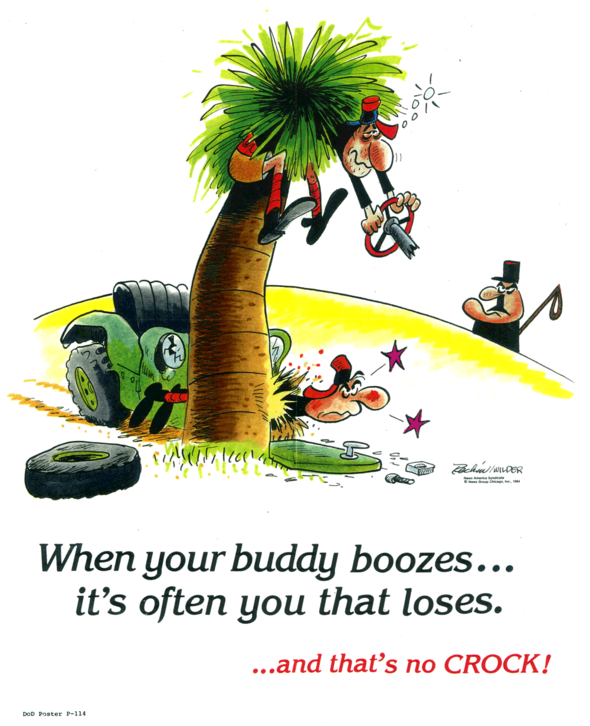 CROCK safety poster made for the Department of Defense in 1984. What’s odd is that there never were any motor vehicles in the strip–but your tax dollars paid for it, so take pleasure in the humorous inconsistency and soberly consider its wise advice.

Dimples resembles the “Campbell Kids” because she IS one. Well, in the same family, anyway. Both came from the pen of Grace (nee Wiederseim) Drayton (1877-1936), one of the first female cartoonists, who worked for us and smaller syndicates in the early years of comics. She also did lots of licensing and advertising art, where her adorable moppets became familiar images. Her most famous creations were the cutout paper doll star Dolly Dingle in the long ago women’s fashion magazine Pictorial Review and the Campbell Soup kids.

See some more about her, and I see now, I used the same Dimples strip last year! – sorry about that.

Thanks for your kind words. There’s a lot of good material that can be found from the fun makers now deep in the past. The trouble is,  a hundred years on, there’s nobody around who lived through the original experience to actually remember it and sing its praises.  To get anything out of the early twentieth century, one has to make the effort to rediscover it.