(Some have found the embiggenation process gratifying. Try it for yourself by clicking moose # 3) 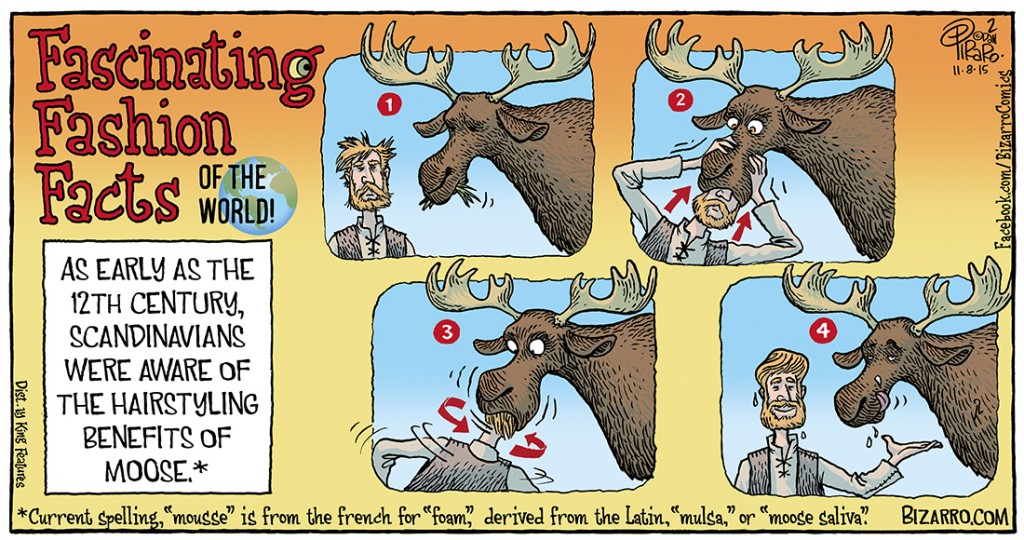 Bizarro is brought to you today by Interpretive Math.

Most of the cartoons I do are meant simply to give the reader a smile or chuckle, but every now and then I like to do one that teaches a little-known historical fact. This is one such cartoon. I got this information from Republican presidential front-runner Ben Carson’s book, “Lightening Bolts of Knowledge from My Genius Brain”. I also learned from that book that the pyramids in ancient Egypt were used as grain silos and that the four classical elements of the ancient world were water, fire, unicorns, and pinecones. He learned these things in brain surgery school so they must be true.

Speaking of wearing clothes I wore “back in the day”, I was recently wearing a jean jacket that I’ve had since middle school––around 1970, I guess––as I passed by a lady setting up a vintage denim booth on a sidewalk in Venice, California. She stopped me to admire it and told me it would be worth around $500 IF I hadn’t snipped off the tiny Levis label hanging off the side of the pocket. As far as I could tell, that tiny label didn’t make the jacket any warmer or more waterproof so I fail to see why it is worth so much money, but then I’ve never pretended to understand the highly complex world of fashion.

Maybe the media doesn’t do this anymore (and maybe they do, I really don’t pay much attention) but there was a time when they liked to give clever names to serial criminals, be they robbers, rapists or murderers. A fearful person might worry that people would begin committing heinous crimes just so they can be famous in the media as “The Ninja Rapist” or whatever. I suppose they might, but if a person is of the sort to be a serial rapist or murderer, or even a bank robber, they’re probably going to do it whether they get called a cute name or not. Every now and then I get emails admonishing me for hiding a lit stick of dynamite in the backgrounds of some of my cartoons because, “You don’t need to be giving terrorists any ideas!” These people are undoubtedly addicted to Fox News Channel. For my part, I think if all terrorists used cartoons as inspiration, it would be a much funnier and safer world. 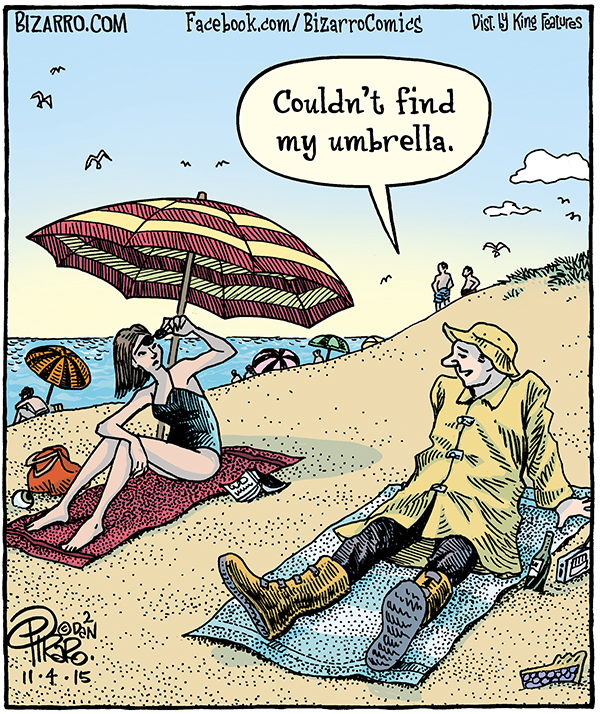 Since umbrellas can be used to fend off rain or shine, I like to call them weather barriers. Seriously, though, for my entire adult life thus far, when I go to say “umbrella” I almost always will say “elevator” first. I can, however, say “elevator” without saying “umbrella”. It’s just those two words, I don’t have this problem with anything else. Does anyone know if there is a name for this? 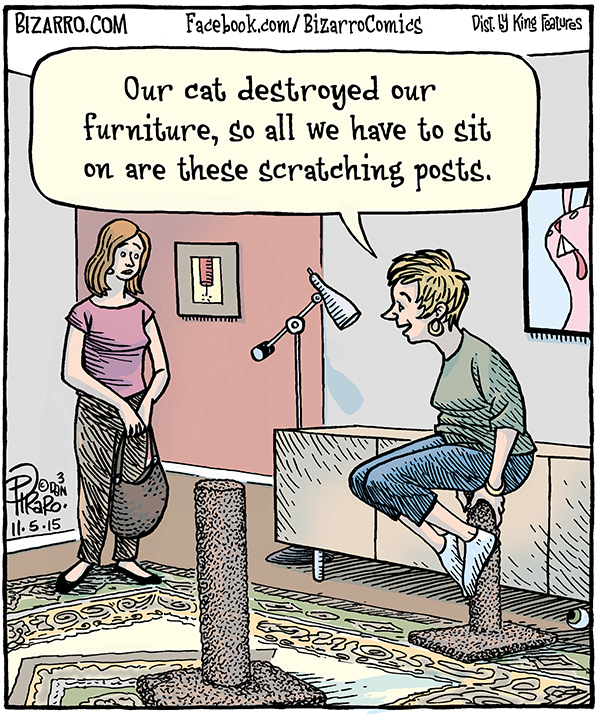 I confess I’m much more of a dog person than a cat person and one huge reason is that cats destroy furniture. (I’ve read enough to be convinced that declawing them is unconscionably cruel so I don’t consider that an option.) Because I am heterosexual, I’ve lived with many cats because I have never been in a relationship with a woman who did not insist on having cats. It has been my personal experience that the only thing you can count on a cat leaving completely alone is a scratching post or any sort of device designed to attract a cat to scratch it. Unless, of course, it is shaped like a chair and made of leather or a reasonable facsimile. 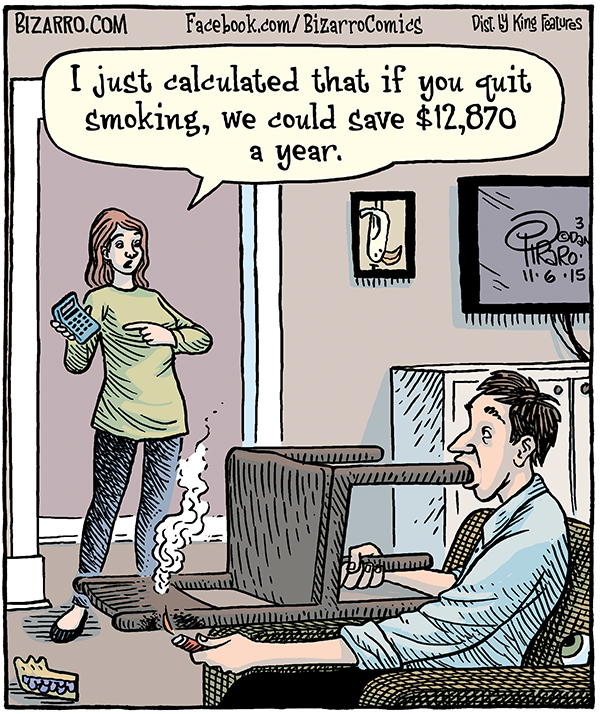 I’ve quit smoking twice in my life and I can tell you without fear of contradiction that it is a singularly miserable experience. (Quitting, that is, not smoking. I really loved smoking.) The constant anxiety, the nagging hunger for a puff, the irritability that makes you want to kill someone in yoga class because they are too close to your mat; it’s just a joy from start to finish. I am now 11 months away from my last cigar so the daily discomfort is long gone, but I have to admit that I still miss it terribly. I don’t, however, miss the fact that I and everything I owned smelled like a cigar. I happen to love the smell of cigars but the majority of my species does not, especially here in California where the only class of people more despised than smokers of tobacco is pedophiles. I am now able to walk down the streets of Los Angeles without people throwing rotten produce at me from passing cars, so I guess it was worth it. 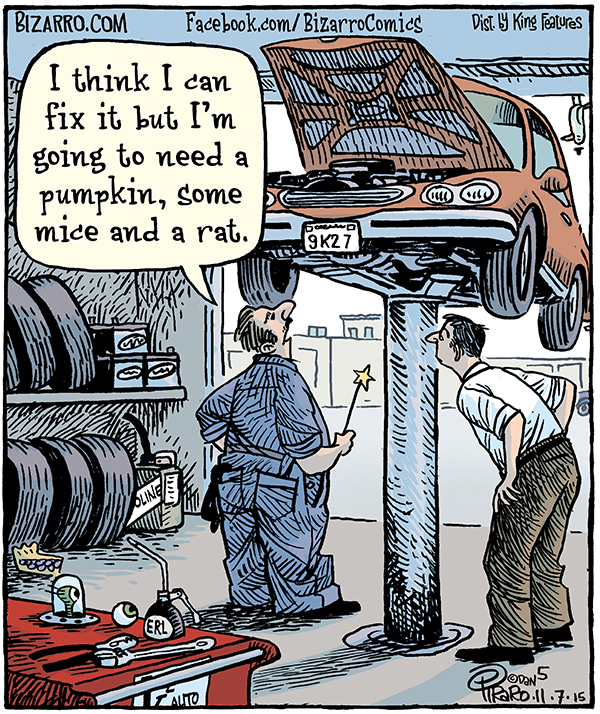 My final cartoon this week is a reference to Cinderella’s coach, which was notoriously fabricated from a squash and some rodents. I thought this story was a fairytale but according to the Ben Carson book I mentioned above, it has its roots in fact. In ancient Europe, poor people could not afford to eat the super-nutritious grain stored in Egyptian pyramids and so they were much smaller than modern-day Americans––like, 1/8 as big. Accordingly, they used to fashion carriages out of various kinds of produce––pumpkins, watermelons, acorn squash––and use trained rodents to pull them. Personally, I can’t wait until Dr. Carson is president and shares his knuggets of knowledge with us on a daily basis!