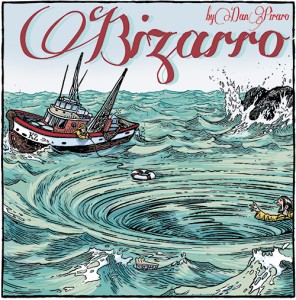 (Wanna see it more embiggenated? Click the cartoon with the pointy hand deal.) 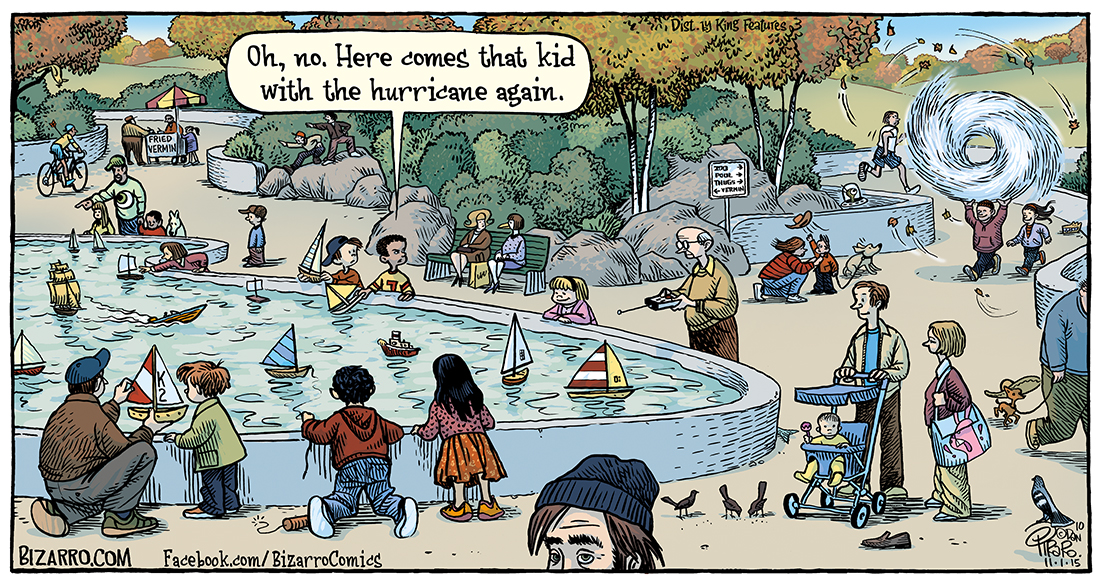 Bizarro is brought to you today by Unusual Things To Do With Children.

When I lived in NYC I used to occasionally enjoy watching people playing with miniature boats in the big pond in Central Park. May I assume you will not be surprised to discover that it was the inspiration for this cartoon? I’m glad that a hurricane hasn’t hit somewhere this week and killed tons of people, otherwise folks would be all up in my grill about making fun of tragedy too soon, not realizing I submitted this cartoon for publication weeks ago. Here are a few fun things in the background of this pic that you might not be able to see even in the embiggenated view: The white sign just right of center says, “Zoo, Pool, Thugs, Vermin”: The food cart in the far background on the left is selling “Fried Vermin”: On the park bench in the center is a woman with a bird head: The pigeon in the right foreground corner is standing on my signature. Other than that, there are also 10 “secret symbols,” as the small number above my signature implies. If you’re not aware of the secret symbols, check out this link here, but keep it to yourself or they won’t be secret anymore.

On the same day this cartoon about court published, there was a very similar gag in another cartoon feature, Non Sequitur. A few people asked if we coordinated that for some reason but we did not. Similar cartoon ideas get published by different artists all the time, sometimes on the same day. It’s almost always purely coincidence and it’s just the way things work. Unless you’re a person inclined toward conspiracy theories. 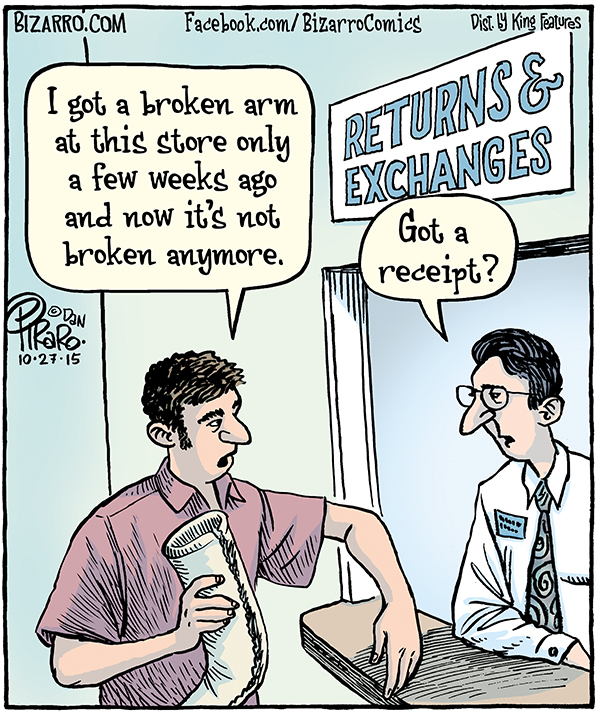 Broken bones are not always funny but in this case I thought it was. 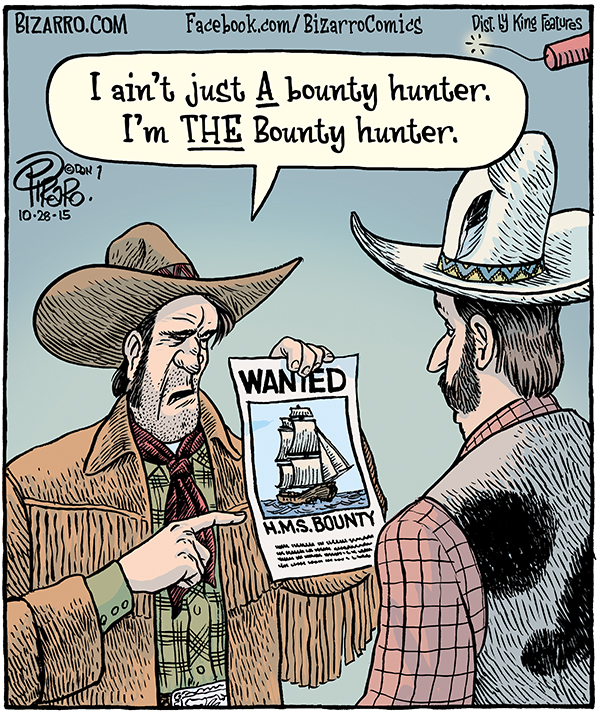 You may enjoy the cartoon above if you like cowboy stuff or tall ship stuff. Even if you don’t, you might like it. Or you might not. I can’t predict these things. If you don’t know what the H. M. S. Bounty refers to, have a google. It’s a good story. 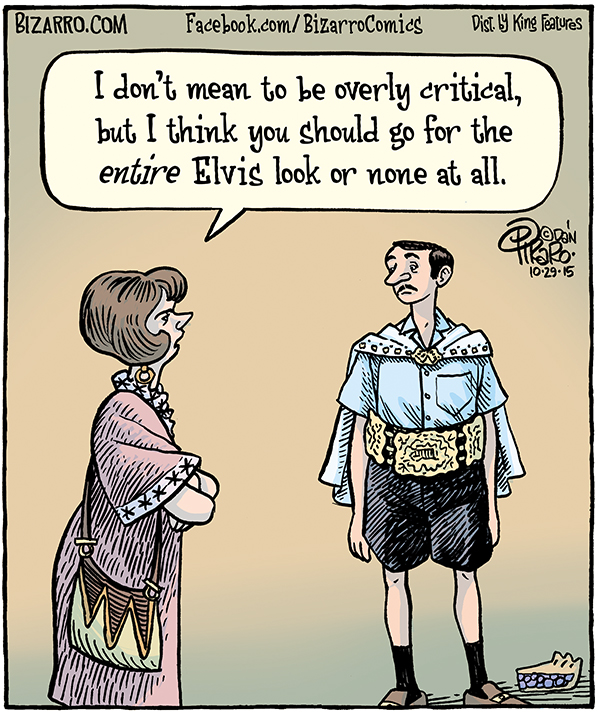 I was thinking that dressing like Elvis is pretty silly and then I thought that a half-assed Elvis would be even sillier. Seems appropriate for Halloween week. 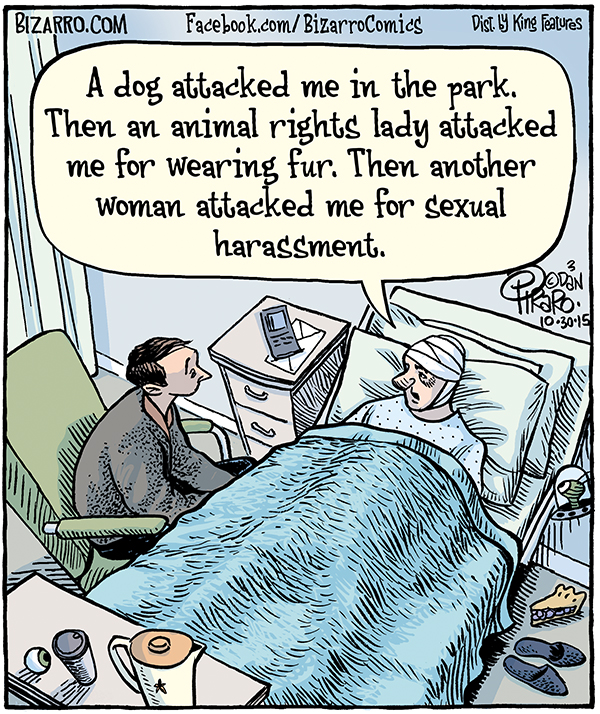 If you think about this cartoon sequentially, it can be kind of funny, I think. Many Americans are super into “activism” on just about any level you can think of so even though this is over the top, it’s not entirely inconceivable. 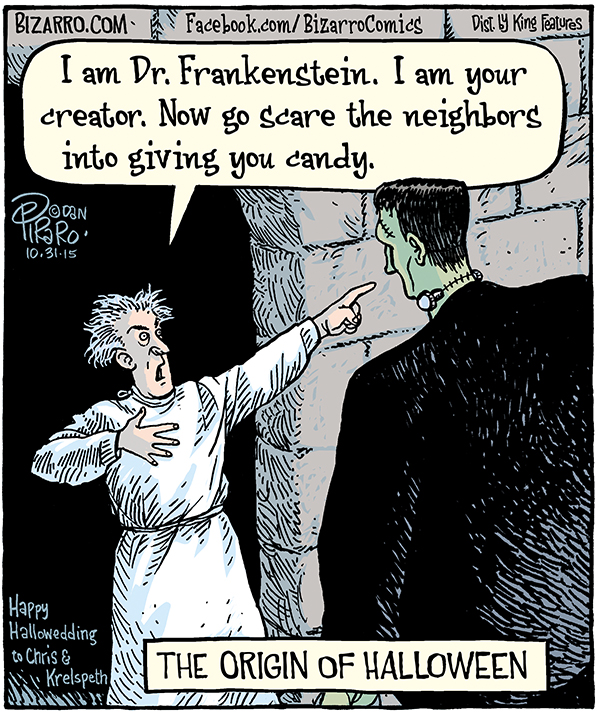 I’m writing this blog post on Thursday morning because I’ll be out of town this weekend attending the costume wedding of my youngest daughter and some guy she’s marrying. They’re calling it a “Hallowedding.” That’s what the message in the lower left corner is about. I’m sure it will be tons of fun and if I think it warrants it, I’ll share some pictures next week.

In the meantime, check out my Bizarro Facebook page where I’ve been posting some pics of an oil painting of mine. People have been really liking it and that makes me happy.

Have a great week, Jazz Pickles!