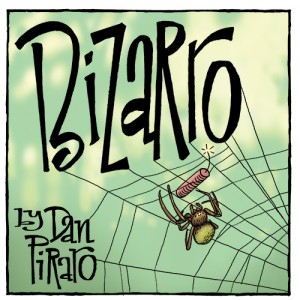 (If you enjoy the embiggenation of cartoons, click on them.) 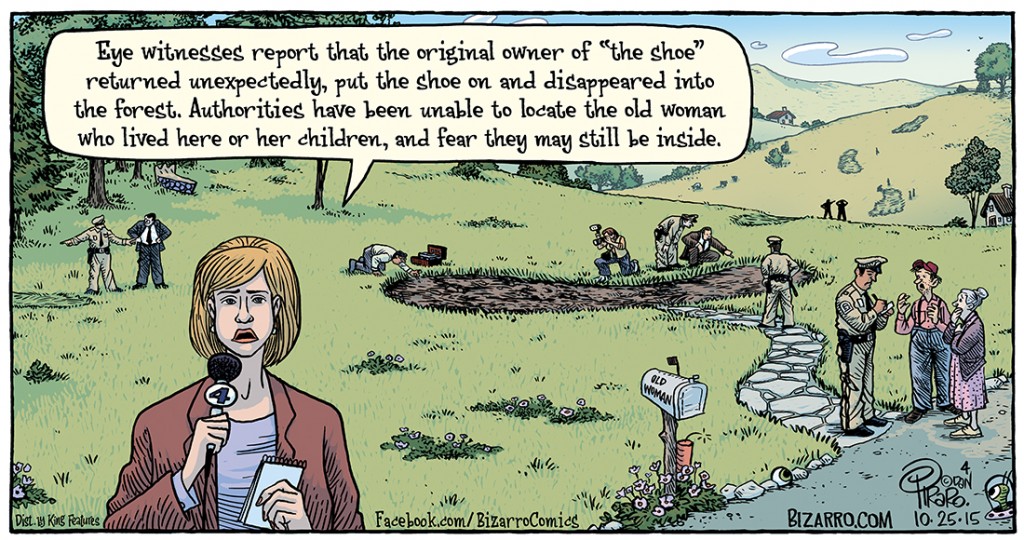 Bizarro is brought to you today by Seats Are Cheaper On The Wing.

There have been a few “Old Woman Who Lived in a Shoe” cartoons over the span of my 87 year career as a cartoonist and this is arguably one of them. Here is another one that is built on the same premise but leaves less to the imagination. 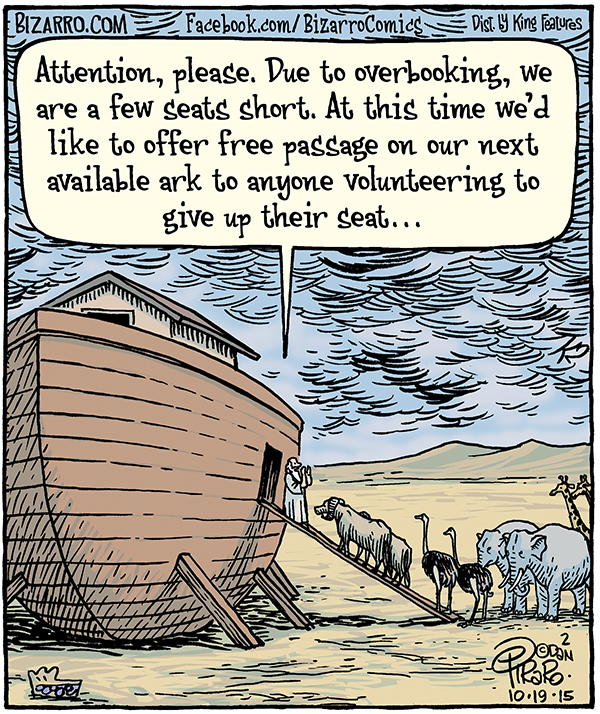 Here’s one built on a combination of the myths of Noah’s ark and the commercial airline industry. Myths can teach us important things about ourselves and our world, they only become dangerous when you believe them to be literally true. Like believing the TSA can keep us safe or that commercial airlines have anything even remotely approaching fair pricing policies. 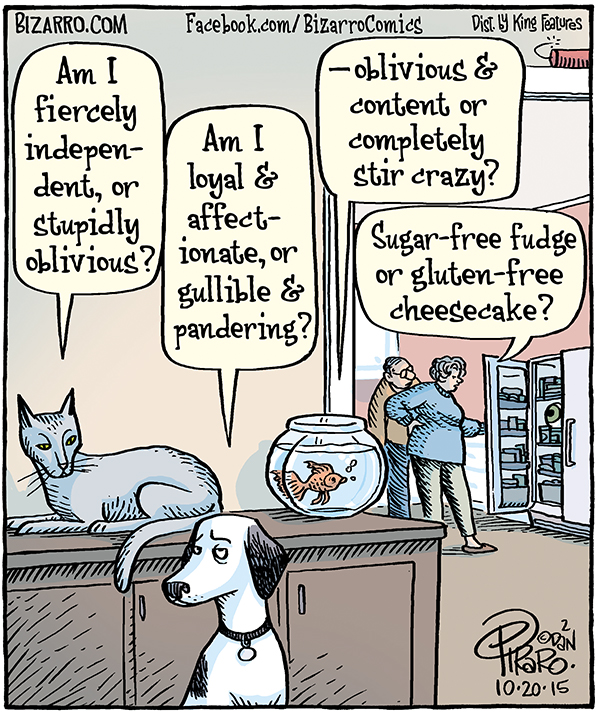 I’m not sure what got into me when writing this cartoon or exactly what it means. I think I was just riffing on the way we quite naturally anthropomorphize our pets and imagine we understand their behavior and motives. But then it turned into some lame statement about how unnatural our lives have become. I am one who believes that other animals are far more like us than not like us in some ways, and very unlike us in others. I know, that doesn’t tell you much at all. I also think that our species’ behavior since the Industrial Revolution has caused the Earth to find ways of drastically reducing our numbers and that we will very likely, very soon be returned to a more primitive, dystopian world to live in, one in which we “first world” citizens will be painfully ill prepared to compete. 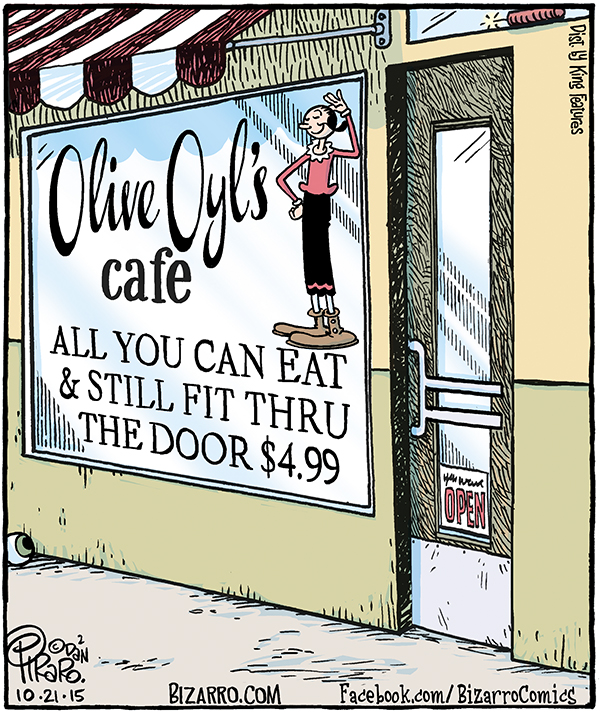 If you don’t understand this Olive Oyl’s Cafe joke you either have not noticed that the door is less than half the size of a normal commercial door, or you are on another web page right now and not even looking at this cartoon. Here in the U.S., obesity has become epidemic. I was in an all-you-can-eat restaurant in Oklahoma not long ago and was alarmed at the average size of the people there. If you live in those places you become used to it––studies have shown that the parents of obese children almost always think they look normal. And in those places, of course, normal-sized people look emaciated to the locals. (I’m using the term “normal” to refer to the size that humans with adequate diet and exercise have been for millions of years. The new normal in places like the U.S. is about a third bigger than that.) 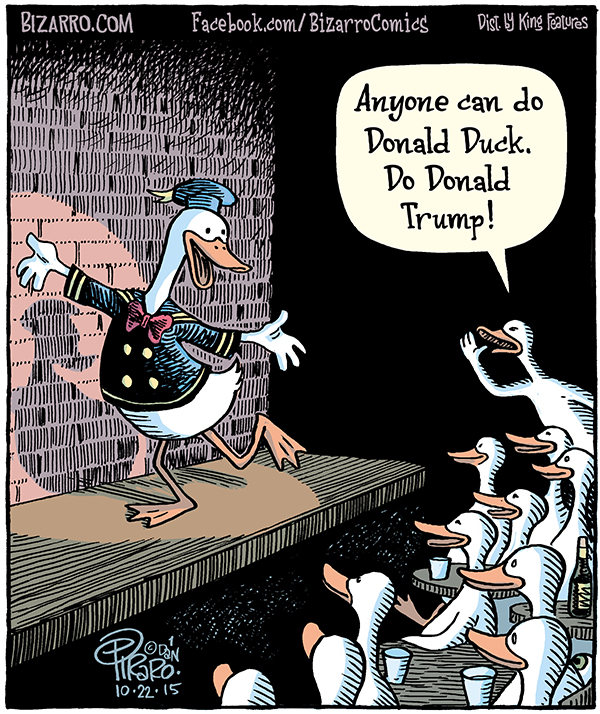 This gag may look like a political statement but it is actually just a bit of fun with ducks and things named Donald. But, WOW, it is actually beginning to look like Donald Trump will be the Republican nominee! It certainly says a lot about the depth of insanity that the Republican Party has descended into. I daresay that former Republican presidents and luminaries from more reasonable times are spinning in their graves at the possibility. I think it is important to note that if it weren’t for corporate propaganda machines like Murdoch’s FOX News Channel, he’d never have gotten this far. The average person would never run that far down a blind alley without being led by misinformation. I suspect most thinking Republicans are disappointed by the party’s lack of good candidates, too.

My uneducated opinion, of course, and one that will likely lose me some readers. 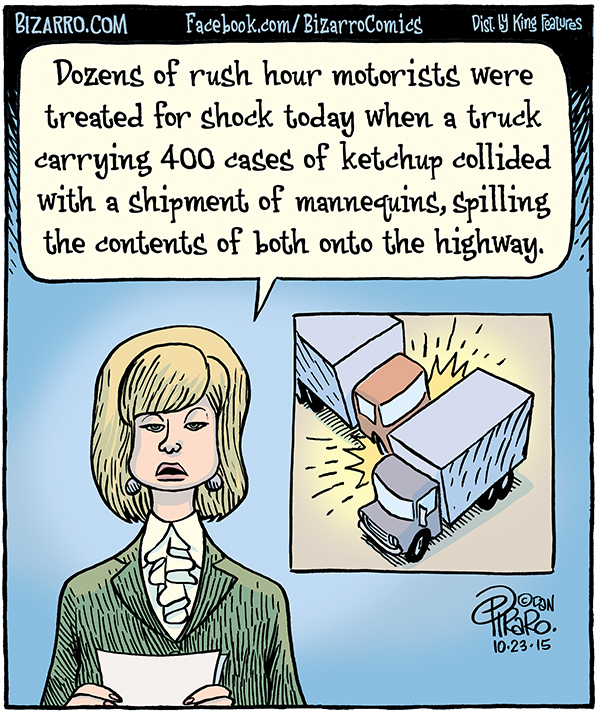 I quite enjoy the ludicrous setup of this truck crash cartoon but am sorry that I’ve got to discuss it the day after the tragic events at Oklahoma State University yesterday. I extend my heartfelt sympathy to all involved. 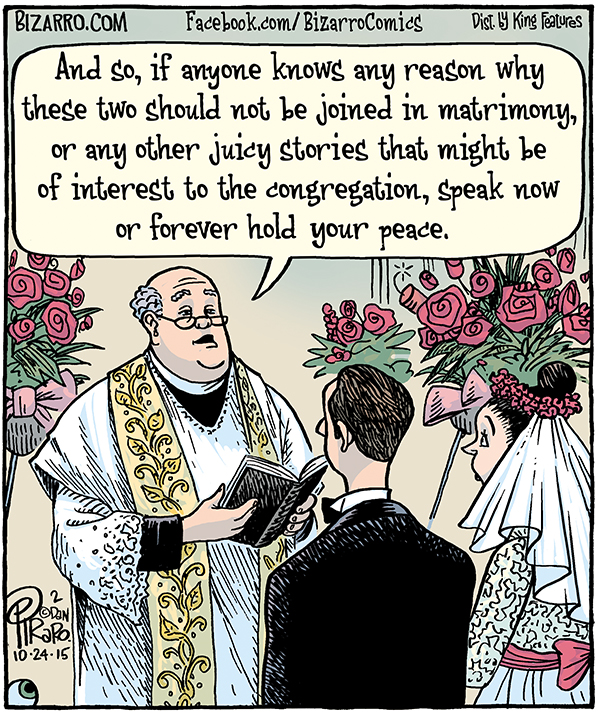 My youngest daughter is getting married next weekend (on Halloween––they’re calling it a Hallowedding) and I seriously doubt they’ll use this strange, archaic line from traditional weddings. But I’ve heard it used before and have always wished someone would speak up, just to spice things up a bit. “Uh, excuse me for butting in but he’s already married to me and these are our seven young’ns.” Or, “That’s not a woman, that’s an orangutan in a wedding dress.”  The ensuing chaos as the orangutan attempts to escape and the congregation panics would be much more entertaining than the average wedding. My daughter’s is a costume wedding, so it should be pretty fun. I’ll post pics in a week or so.

Thanks for reading, Jazz Pickles. Hope you have a dandy pre-Halloween week!