Ask the Archivist: WHAT A FAMILY!

Today’s entry is a little-known Sunday series from 1946-54 by gag panelist Colin Allen that covered the doings of the Looney family.  What A Family! bucked the usual trend in family strips, in that most of the time we’d follow what would be the familiar experiences that a normal everyday American would encounter with their growing children, their pets, and the neighbors. The “Blondie” standard is usually sought for family series, but Allen’s family takes the opposite approach.

The Looneys are not normal; they are all impossibly stupid, destructive and obnoxious.  They see themselves as superior to the surrounding populace, and seem to all at once dedicate themselves to one big dangerous or otherwise ill-thought-out project, or they’re scattering in different directions doing  something they shouldn’t.

They all have names beginning with “L”, including the dog. All but the mother have deep red hair, also including the dog.  It’s been said throughout history that “Gingers” have had wild tempers, overactive libidos, and can even have supernatural (evil) powers.  I guess that in Allen’s mind, that adds to the explanation for the brood’s wacky conduct.

I don’t know a lot about Colin Allen. For the most part, he was just another of those workaday cartoonists that lived off of one-shot submissions to the big mainstream magazines of the day; some ads, including a “Wheaties” campaign; and book illustrations. In the samples below, you’ll notice the style of pen work changes enough to assume a different man is doing it. According to Alan Holtz, it was also worked on by Jim and Dewey Clark and a certain “BIP.”

The series was not a big seller, and chiefly resided in the Hearst papers’ Saturday evening comics section, mainly the Chicago Herald-American and the New York Journal-American. I’ve never seen it in anything other than tabloid size, even when it was used in full-sized papers like the San Francisco Examiner. 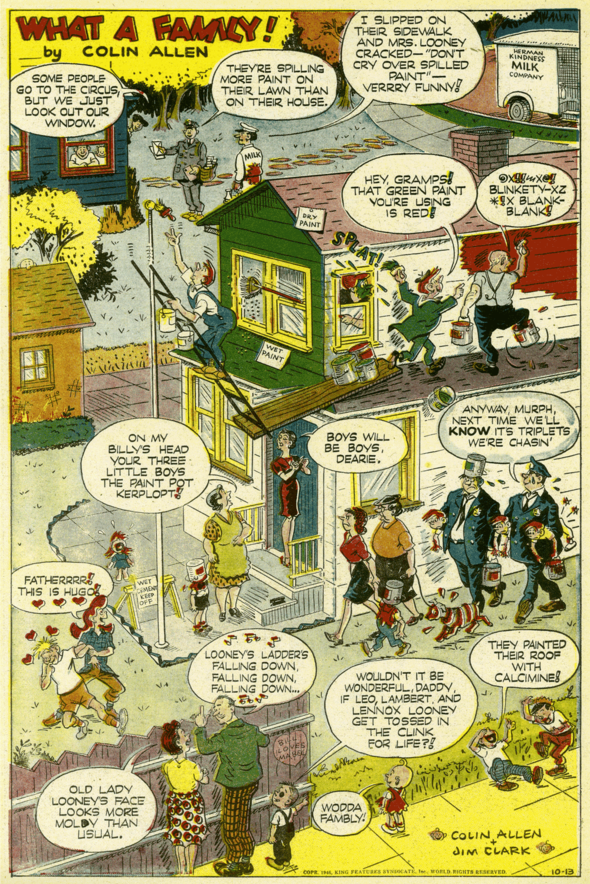 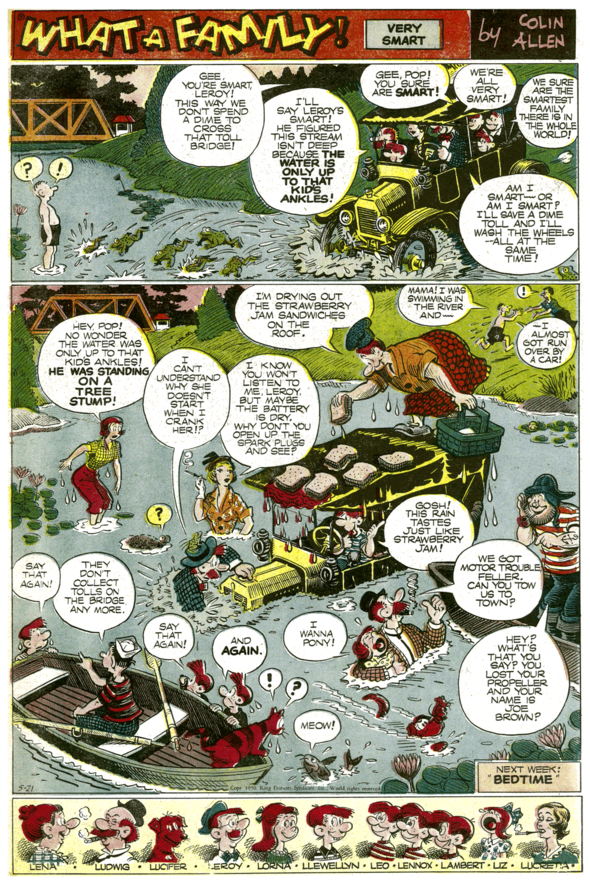 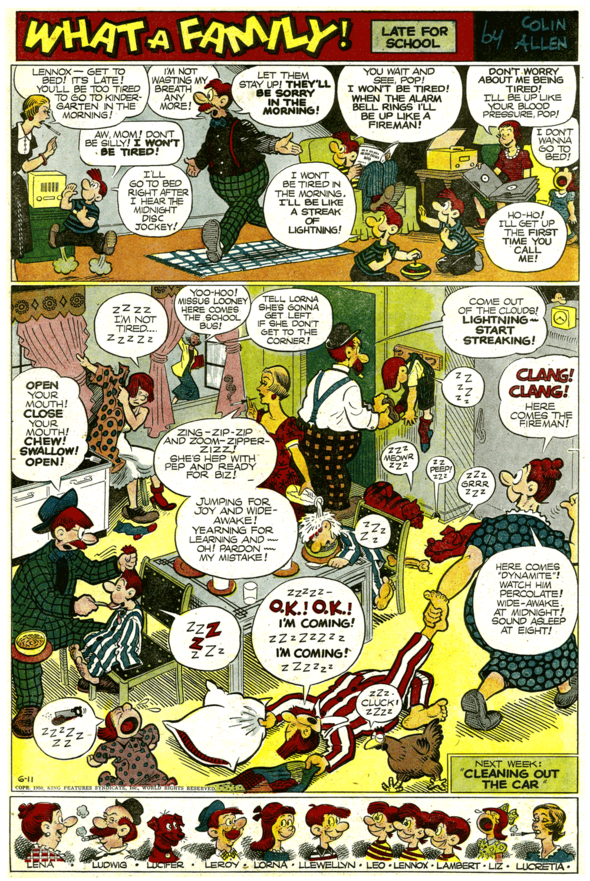 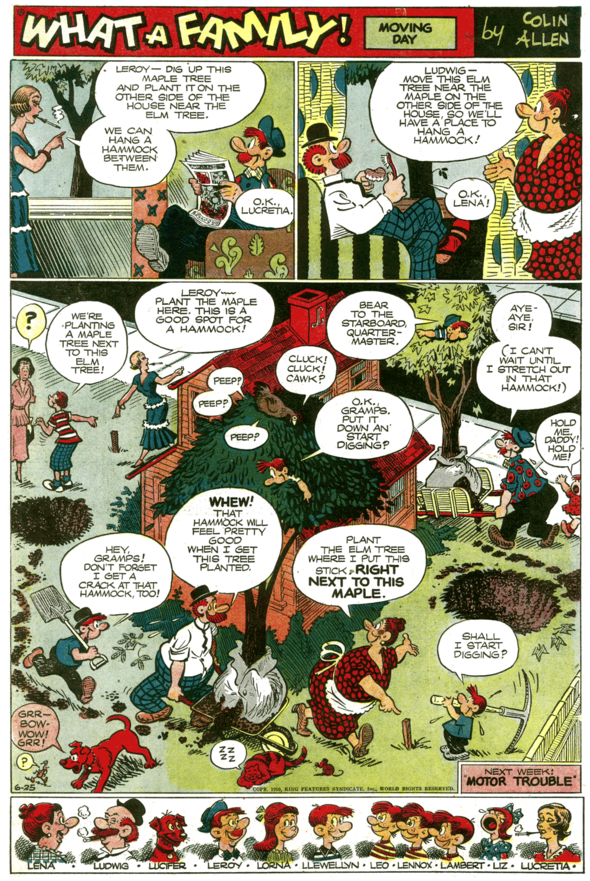 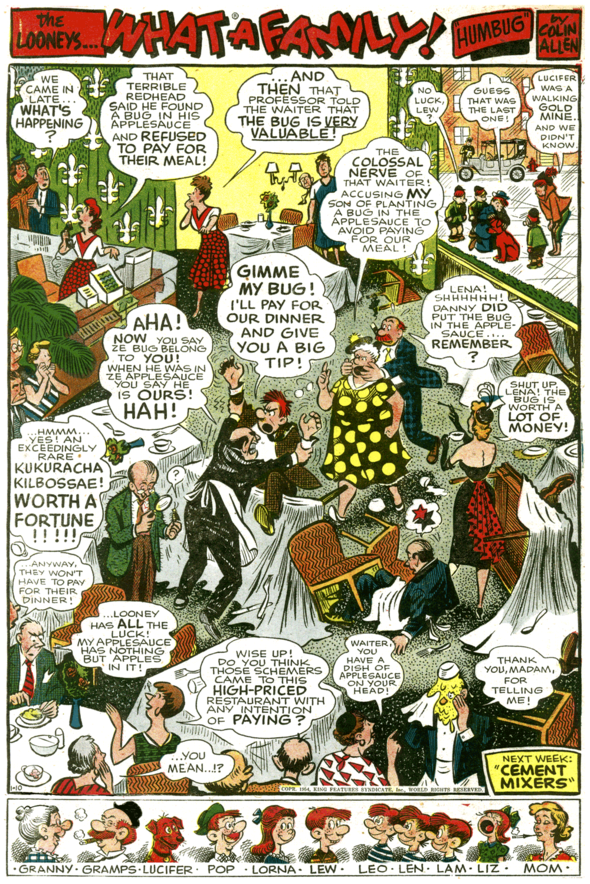 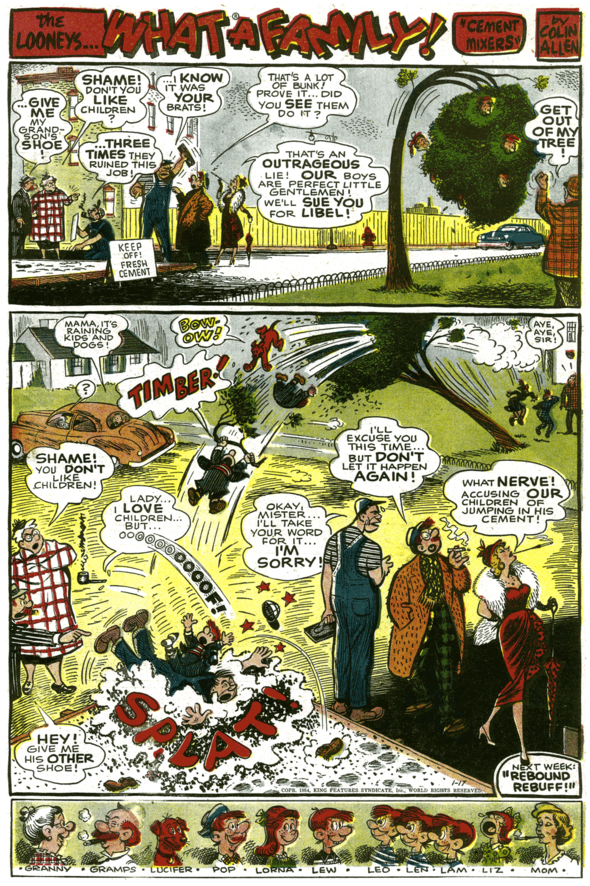 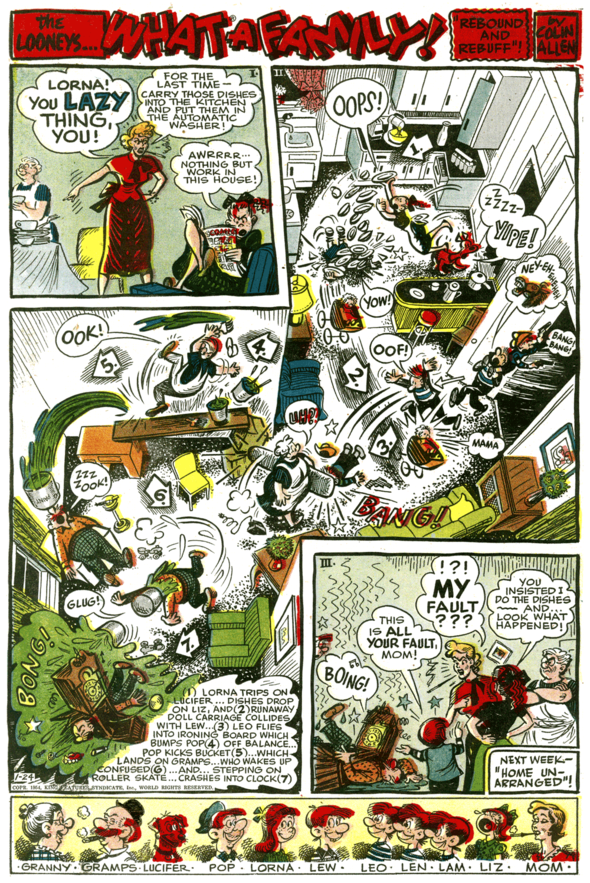 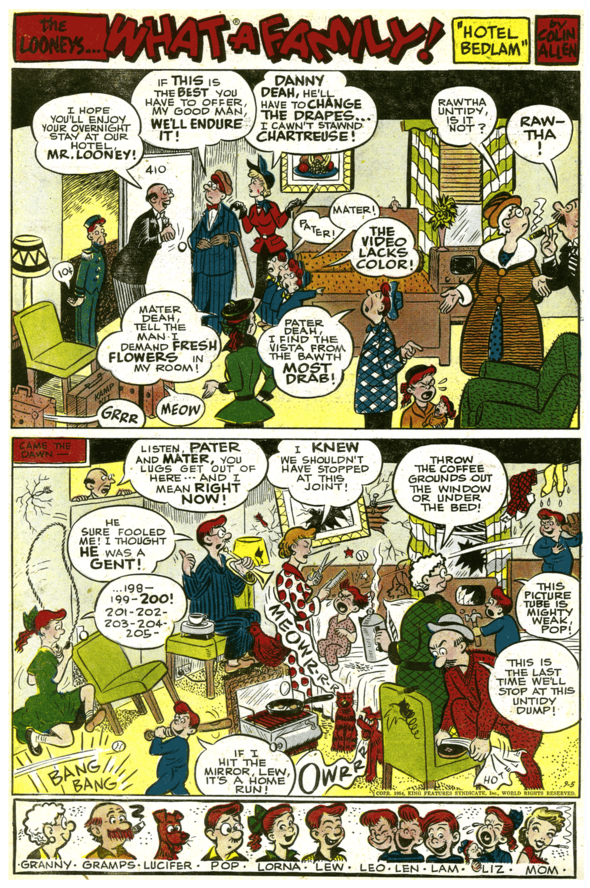 I don’t know what happened to the Charley Chaplin strip, Certainly they were knocked for a loop when Stewart  Corothers died so suddenly and horribly (100 years ago this week). Seemingly they had no bullpen at Keeley or maybe nobody wanted to touch a hoodooed series. Maybe that’s why they went with the three hacks, Segar being the least talented of them.

I’m surprised so few of our readers had anything to add or say about the series. But such is fame…

The name on the strips had evolved from the earliest Hearst sections, which had the type  set between what was originally a top picture instead of a top comic.

The reason for this is so they could easily change the title for different language versions, as in the time when we had a large German audience and the New York Journal even had a Deutsche doppelganger. Look at this for more:

TO Chuck in NYC-

My memory is fading fast, but I seem to recall Harvey Kurtzman once crediting what he thought of as very off-the-wall humor in Needlenose Noonan for being one of his childhood influences.  I guess he read the New York Sunday Mirror, which is the paper that attached play money and long skinny ads to the bottom of the strips in their comic section, which I showed last week.