(And when the illustration of the escaping Israelites was clicked, the Lord embiggenated it.)

Bizarro is brought to you today by Sibling Rivalries of the Bible. 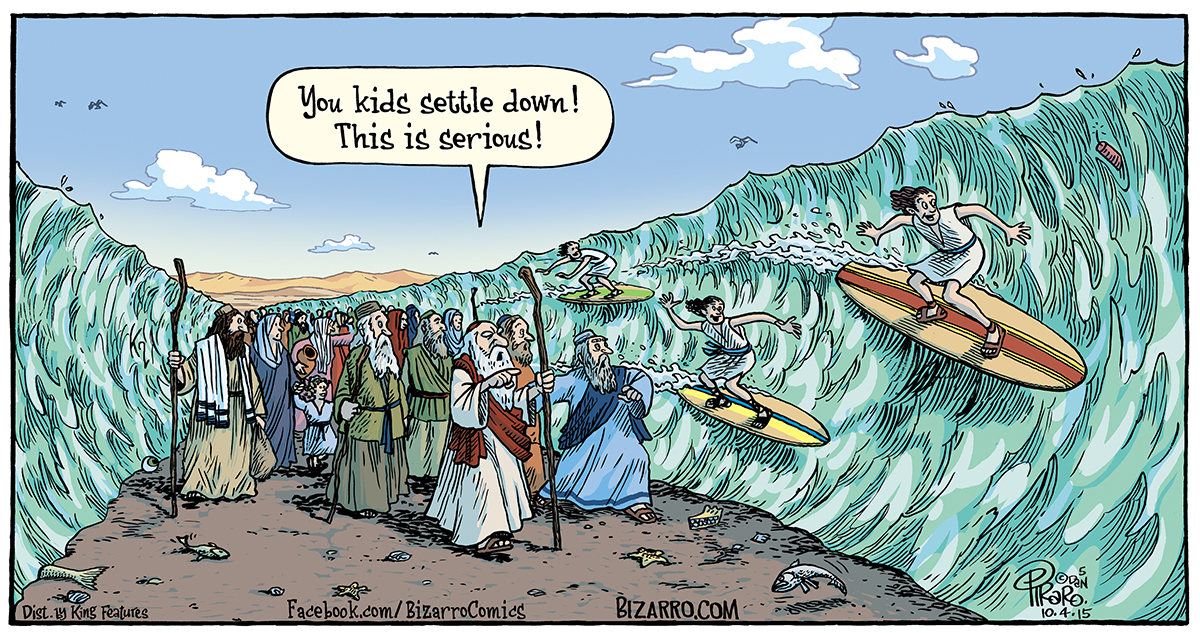 Ever wonder what those crazy stories in the Old Testament (or Torah) mean? Neither do I, but they are fun to do cartoons about and since it was supposed to have happened so long ago, very few people will say, “Too soon.” One might also wonder if this cartoon was created to mirror the current refugee crisis in the Middle East and Europe and the answer would be no, not directly. Pretty much any time one does a cartoon about escaping refugees, there’s going to be a group of refugees somewhere in the real world. Sadly, humans have a fairly consistent habit of treating each other horribly and keeping each other on the run. 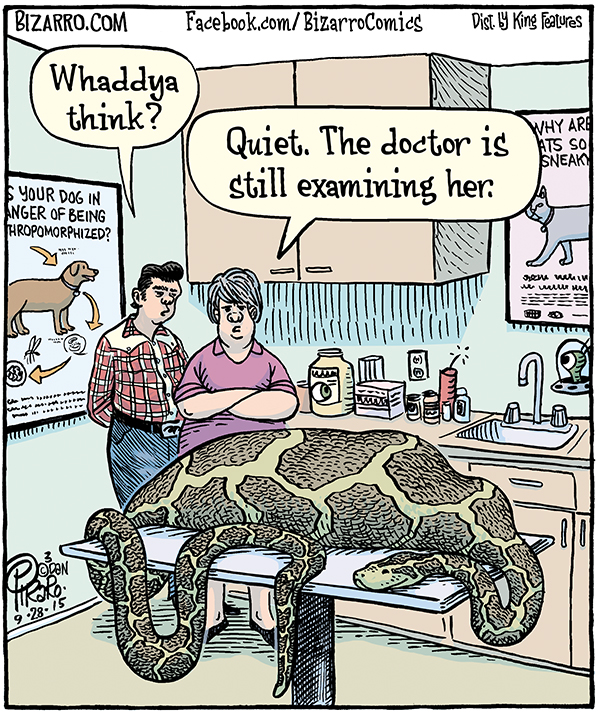 In other cartoon tragedies this week, this vet was swallowed by a snake. I was somewhat inspired to this cartoon by my friend, Jan, who has a hugely big Burmese Python named Louise, who once swallowed a UPS man who came to the door and Louise had to be force fed laxatives to save him. And I swear everything about that sentence is absolutely true other than the part about the UPS man. 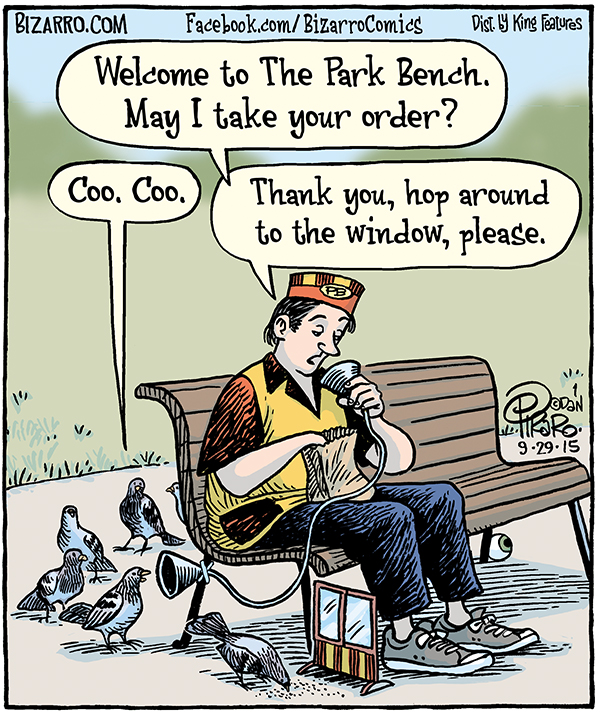 Here’s a guy––let’s call him Rusty––who has decided to enter the entrepreneurial field of pigeon fast food. Business is thriving but he’s yet to turn a profit. Come to think of it, it sort of mirrors my experiences with offering my cartoons for free on the Interwebs. If you feel badly about having read my cartoons for years and never sending me anything in return, you could buy a few of these T-shirts for yourself and others. The holidays are not far off, if I recall. (Only available till Oct 14) 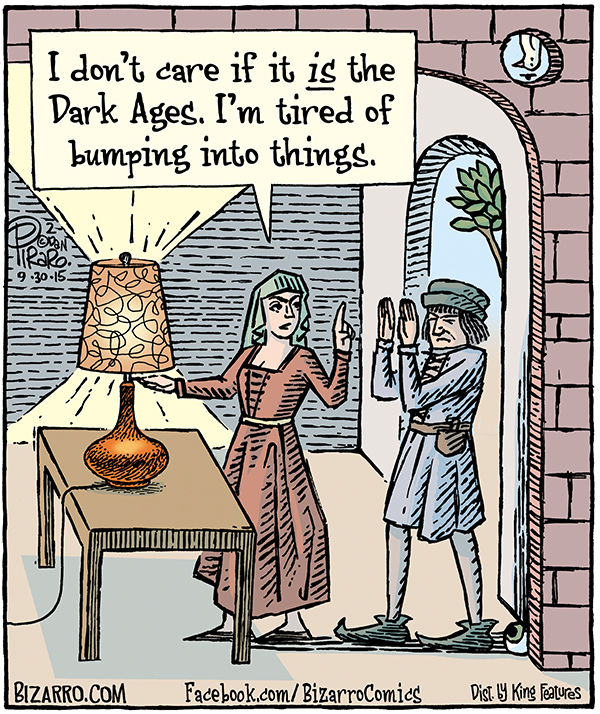 If you’re completely uneducated you may never have heard of The Dark Ages. Lucky for you, I have and am now going to tell you all about them.They happened a very long time ago in Europe, most people were poor and ignorant, a small handful of powerful kings had all the money and control, and very little progress of any kind was made. Sounds not unlike the very near future of the US should Donald Trump be elected president. 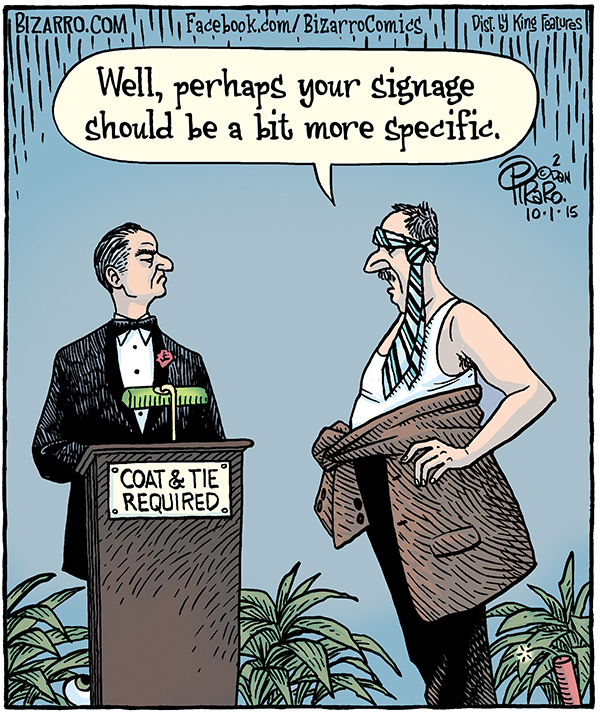 I once worked for an ad agency that was full of artists and creative types who literally never had to deal with the public. For some reason, one day the boss decided to pass a dress code requiring men to wear ties. That was pretty much the whole dress code. No requirements for women, just “men must wear ties”.  So I went to a Goodwill and bought the three largest, fattest, brightest, ugliest ties I could find and wore all three around my neck every day. Yes, I did. I’m just that edgy. No, I did not get fired but I probably should have. (The dress code was very unpopular with pretty much everyone and the boss gave it up after a few weeks.) 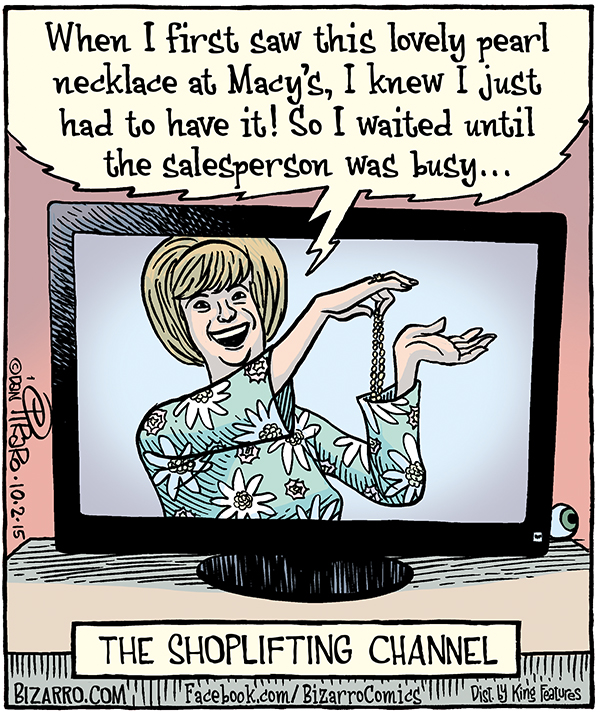 I was waiting for a well-meaning reader to write to me to complain that this Shoplifting Channel cartoon was a bad influence on children but no one has. Bummer. 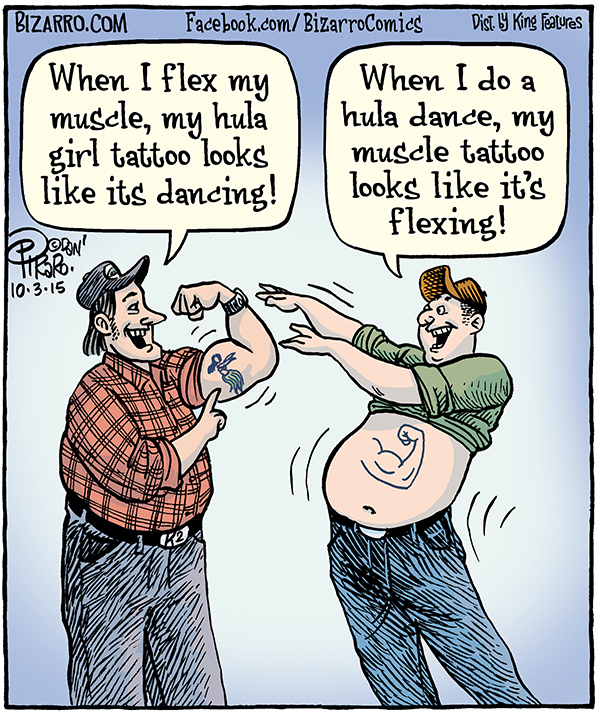 When I was a child in the mid 1900s, I remember seeing a guy on a TV show, movie, or cartoon who could make his hula girl tattoo dance by flexing his muscle. Years later, it became this cartoon. If I knew anything about animation, I’d animate it.

Click here if you’d like to show your appreciation for the fine cartoons I have been providing for you for the last many decades. These are all organic cotton and ship anywhere in the world for a reasonable shipping fee.