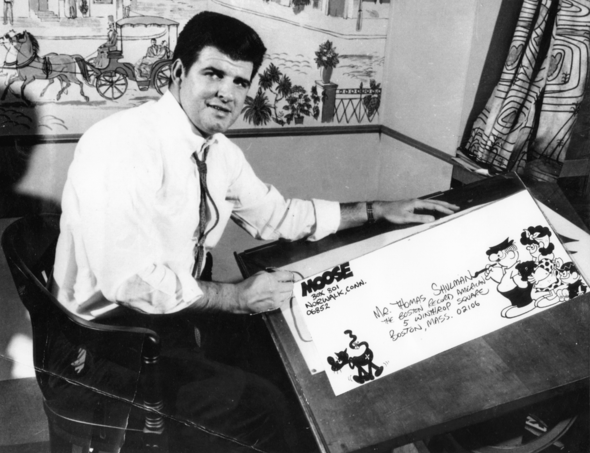 Bob Weber Sr. draws a promotional picture of Moose at KFS Headquarters in 1965, though someone attached over the drawing a reproduction of a letter, probably for use in a Thomas Shulman (1914-71) column. The Boston Record-American ceased publication in 1972,
so don’t get funny and use that address.

Bob  was a freelance cartoonist for years, contributing gags for various publications, including major titles like McCall’s, The Saturday Evening Post and The Wall Street Journal.  He also contributed panel gags to the King Features series Laff-A-Day, where he developed a character that would form the nucleus of what would become Moose.

The KFS editors liked the proto-Moose, and urged Bob to see if he could develop him and his family into strip material. He did, sending in several weeks of samples, and Moose was launched.

A Moose precursor in a Laff-A-Day gag, and
a promo cartoon showing an early design of the Miller clan.

Moose is a flabby, stogie-chomping, languid lout, a world-class work dodger, right up there with Beetle Bailey.  When not mooching off his neighbors, he’s often seen at employment agencies, but only long enough to fail an interview. He spends most of his time pigging out on beer and chips, watching TV, and watching Molly, his busy wife, work to keep the house running.

His kids are little boy Blip, gorgeous blonde daughter Blossom, and bespectacled high school letter man Barry. If that character doesn’t seem to ring a bell,  it’s because although there might be some implied humorous conflict to be derived from an aspiring intellectual son against a low-brow boor father, it appears that Weber decided that there just wouldn’t be enough to make it worthwhile. In fact, “Barry” is  seen very few times, and more like a background character than a main one. So about a year into the strip,  Moose’s son is relaunched as “Bunky”, a shaggy young oaf, befitting a Moose heir. 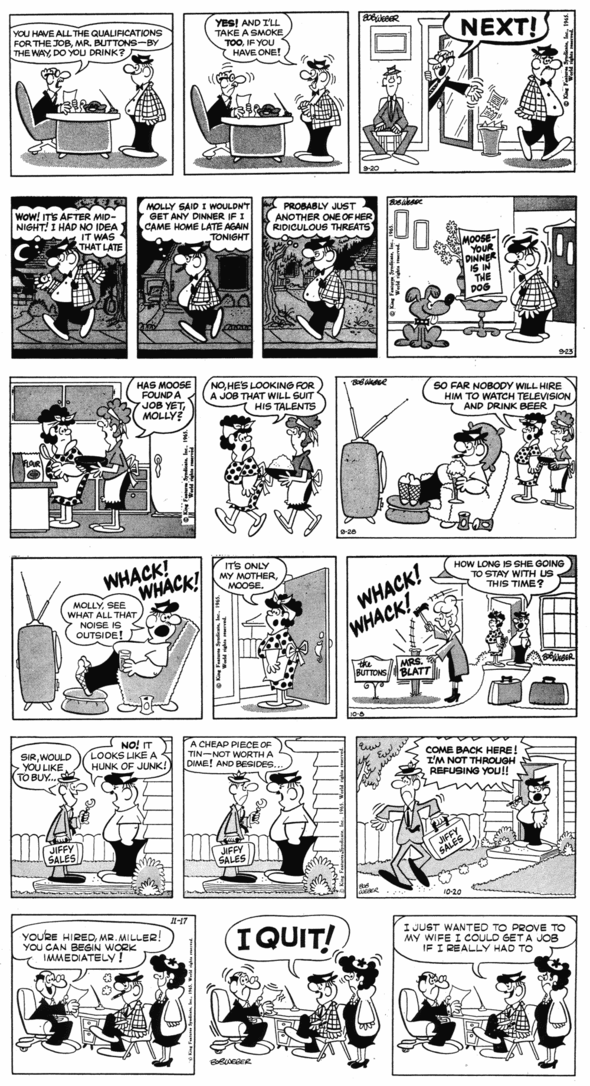 Originally, Moose’s surname was going to be “Buttons,” and there are a few early samples where it still is in evidence, but it has been “Miller” since November 1965. 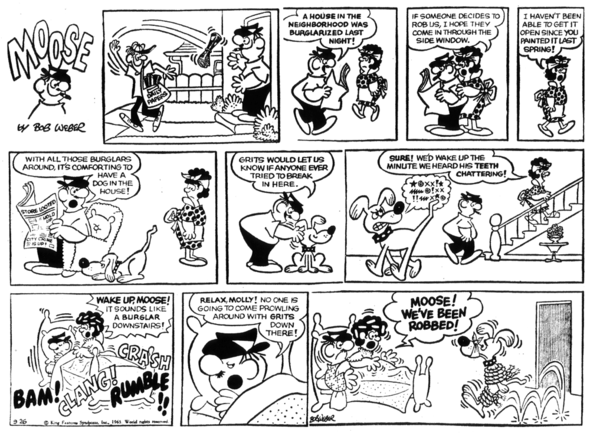 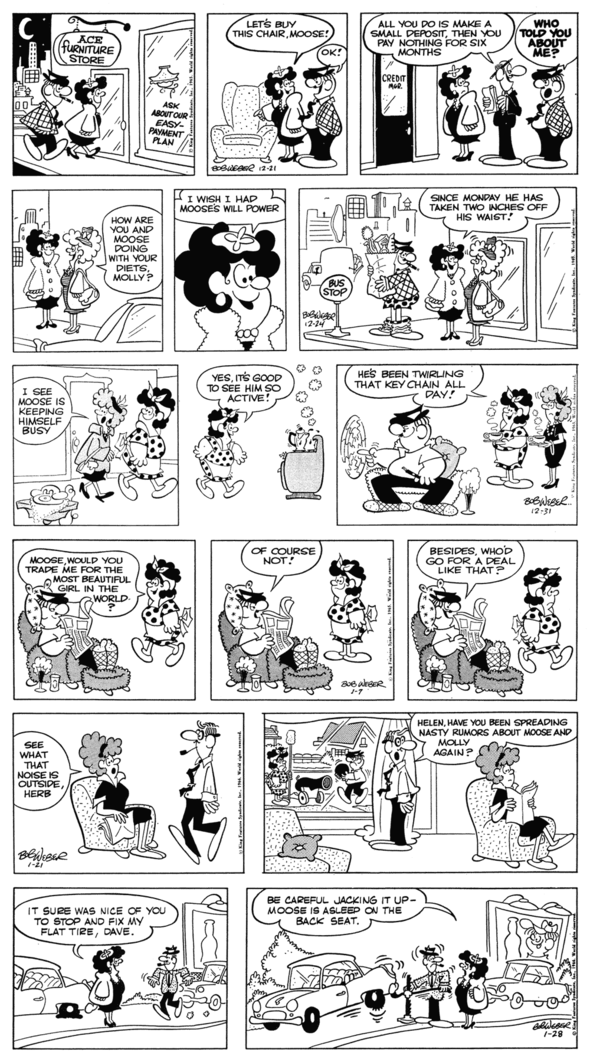 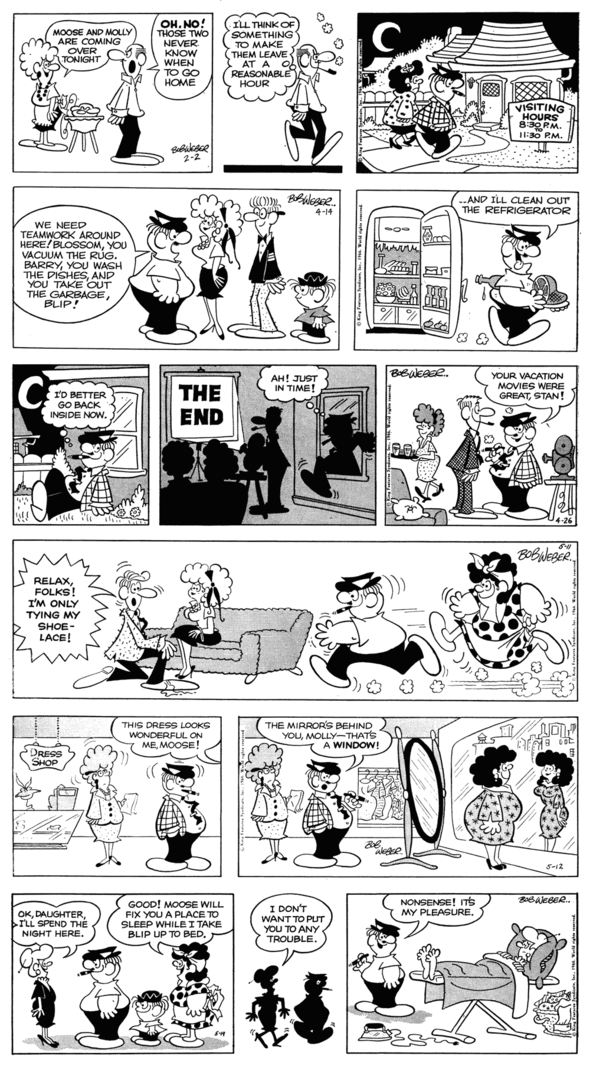 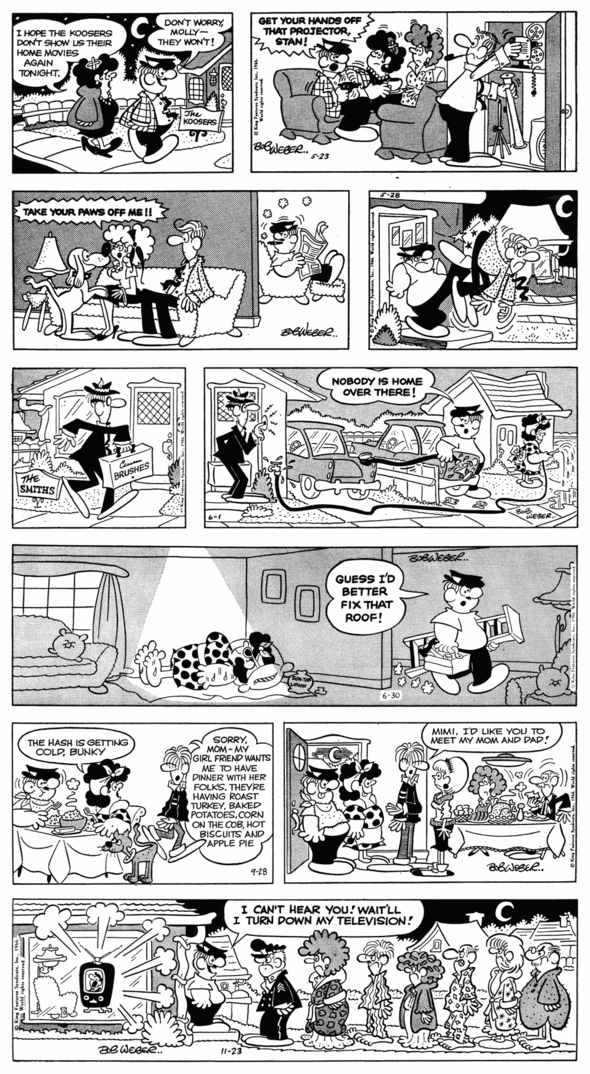 Here’s to the next fifty years!

And last but not least, on to the Mailbag:

Yes, Dora is kind of high maintenance, but perhaps Rod is really the “Dumb” one for putting up with her.

I don’t know if Dora has many followers, considering her relative obscurity, though there would be a lot of Chic Young fans.

Match Game had several incarnations, and your doddering old archivist can recall the original, black & white version of 1962-69. The host was still Gene Rayburn, and their theme tune was  Bert Kaempfert’s “A Swingin’ Safari”(1962). In those days they had new all-celebrity guest panelists each week who would form two teams and play five weekday morning games.  Out of 1752 episodes, only 11 exist today.

Fritzi Ritz was not the first “Flapper”; there were many. Pretty, young girls are always a dynamic subject. Our Etta Kett was one — it began after Dora, but outlasted her by many decades. Chic Young’s pretty girls can have a tendency to look similar, with the same dispassionate expression. Maybe if you can draw one girl, all you need to change is the hair and clothes. Look at George McManus’s gals–they all looked like Nora. When she’s shown with her girlfriends, they all look like clones!

Sure, the phrase Dumb Dora could have been launched by Tom Dorgan — he made up more slanguage than George Ade. His greatest “Hit” as it were, is supposedly bestowing on link sausages the moniker “Hot Dogs.” I should do a blog about TAD’s longtime panel, “Indoor Sports.”

And this question was sent by email:

Here is a question for the Archivist: What ever happened to Puck?

I remember as a boy in the San Francisco Bay Area in the early to mid-sixties that the Sunday comics section of the San Francisco Examiner, a Hearst paper at the time, was called “Puck” in the banner at the top of the front page of the section.  There a top-hatted Puck declared, “What fools these mortals be!”  When in 1965 the Examiner and San Francisco Chronicle merged their Sunday editions, the “Puck” name disappeared.  In the late 1970s, I had business in the Hearst Building in San Francisco and saw Puck on the building directory but never again saw the name in the Examiner.

Why did Hearst never decide to resurrect that ancient name?

“Puck” had a long history. First he was a character in the immortal Bard’s epic comedy-fantasy A Midsummer Night’s Dream (1595).  The “Fool’s” quote is from the play:

Captain of our fairy band,
Helena is here at hand,
And the youth, mistook by me,
Pleading for a lover’s fee.
Shall we their fond pageant see?
Lord, what fools these mortals be!
— Act 3, Scene 2

Next, when the cartoon magazines came to prominence in the mid-nineteenth century, the first major American one was called Puck, established in 1876.   William Randolph Hearst bought them out in 1917, and ceased publication a year later.  In 1931 we launched a new concept, a brand-name comic section using the dormant title, that would showcase advertising space.

The “Puck Section” was only seen in the Hearst-owned Sunday papers like the San Francisco Examiner. The problem for the project was that by the 1960s, the newspapers in the chain were changing their comic sections to include non-KFS strips. The problem specifically for the Frisco papers is their funnies were printed by the same press, and a combination of both papers’ comic sections were offered at the same time, so the Puck designation wouldn’t mean anything anymore.

The last days of Puck were in the 1970s. But so many of the Hearst papers have folded since then, there’s no purpose in a special section now anyway.