Today’s saunter through the dusty corridors of the archives takes us to Murat Young’s first major comic strip.  Murat you say? Isn’t that some old time cigarette brand? No, it’s the name of one of the immortals of comics history, better known by his pen name, Chic Young. 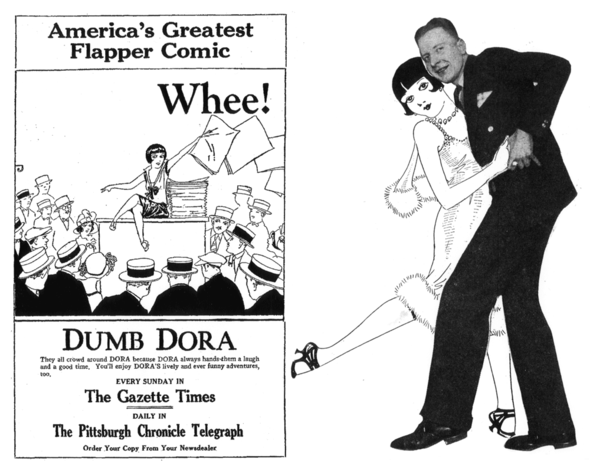 “Dumb Dora” promotion from 1925, and cartoonist
Chic Young tears into a Tango with his comely creation

This week is the eighty-fifth anniversary of the start of Blondie, but instead, we’ll see the gal that preceded her on Mr. Young’s drawing board, one Miss Dora Bell.

Having a goofy pun for a name never bothered her, as  she was better known as Dumb Dora. You’d think even “Chic” would have been better, but she didn’t mind.

Dora was his first Hearst series (through one of our second tier outlets,” Premier Syndicate Inc.”), though Young’s previous  efforts were in the same vein, starting with the short-lived Affairs of Jane over at NEA 1921-22, and then  Beautiful Bab, for Bell syndicate from 1922-24. His forte was the humor surrounding a college-age girl, one that involves a lot of young male attention, and how she can induce them to spend money on her. 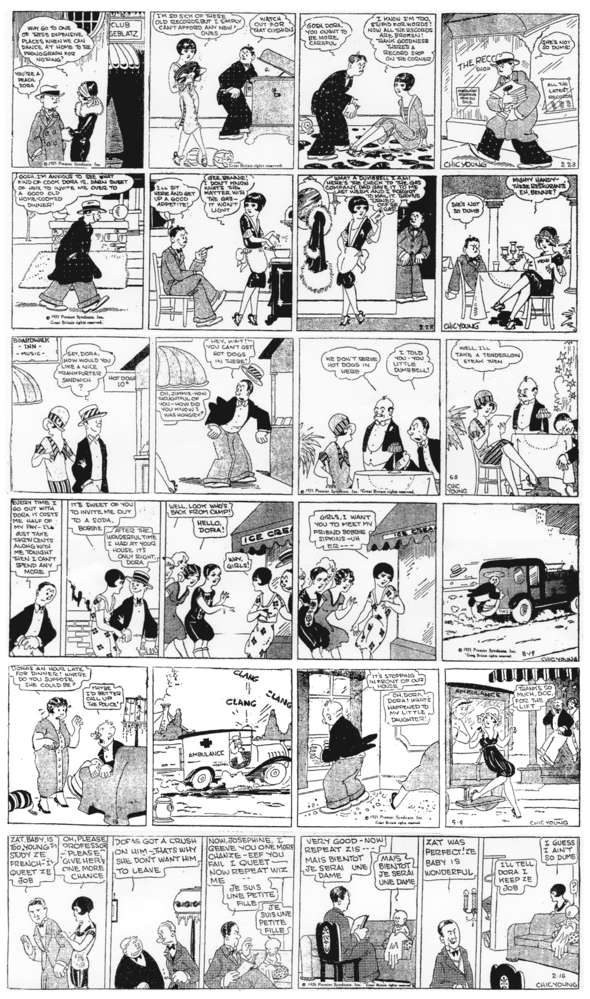 The term “Dumb Dora” was an American slang term for a naive/ stupid girl, often figuring in “she was so dumb, that ……” gags. Some of you older kids might recall these (even then aging) jokes used by Gene Rayburn on the “Match Game” TV series back in the 1960s-’70s. 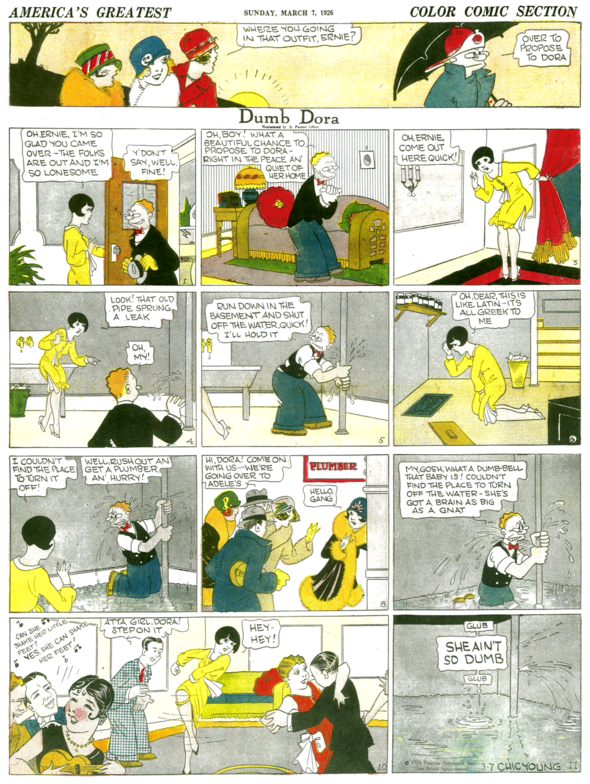 The phrase was not malicious, and was considered a gentle appellation in those more gentle times. Girls would form “Dumb Dora Clubs” in school.  I guess that the strip itself never captured the public’s imagination enough to make the term exclusively pertain to the comic though. I recall older people who probably never read the funnies using it in conversation. 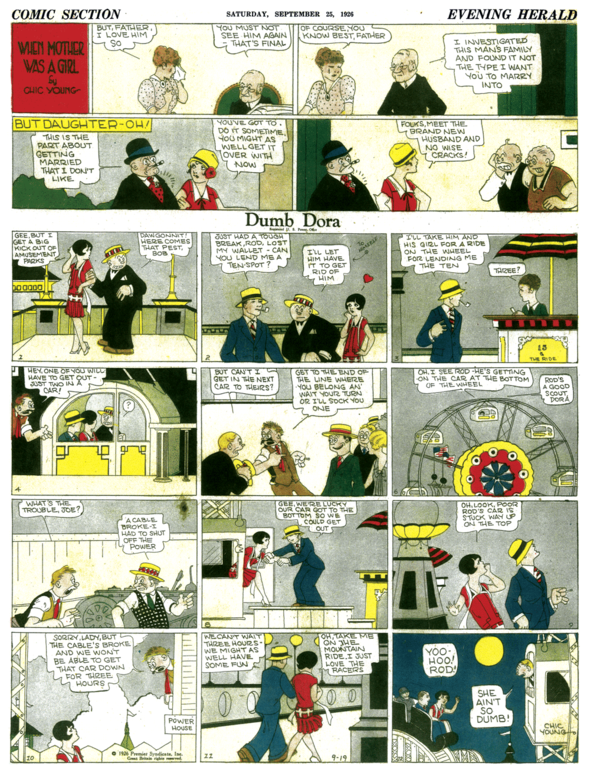 Dora was beautiful but dumb, and rather self-centered. Often she’d make a dumb choice that turned out to her benefit, and her boyfriend’s expense, leading to the tag line- “She ain’t so dumb!” She had many boyfriends, most notably Rod, a stocky, blonde-haired guy, easily put upon by the scheming Dora. 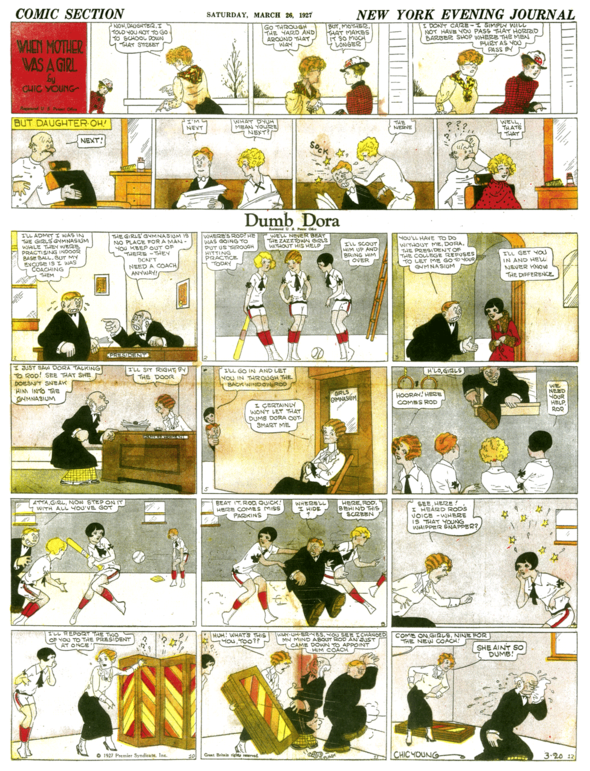 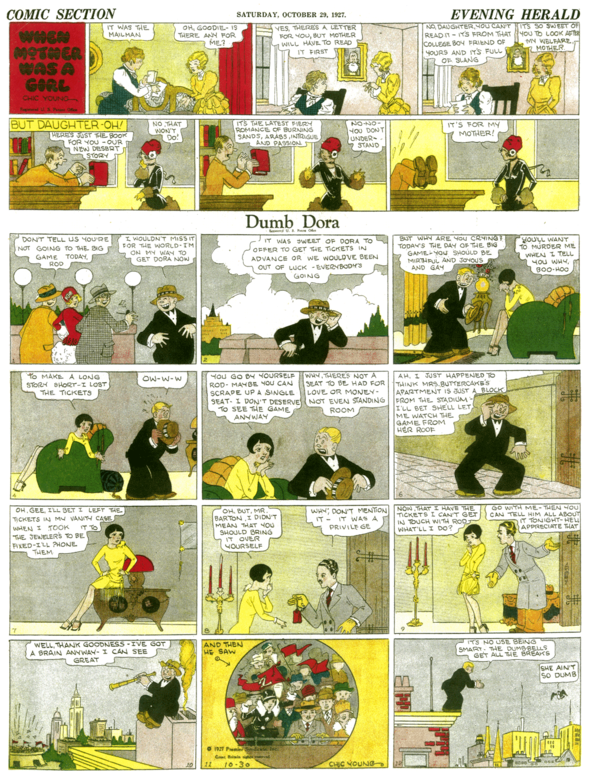 Chic Young left Dora in the hands of Paul Fung in early 1930, as he put together the first weeks of Blondie. The series lasted into 1936, eventually done by Bil Dwyer. 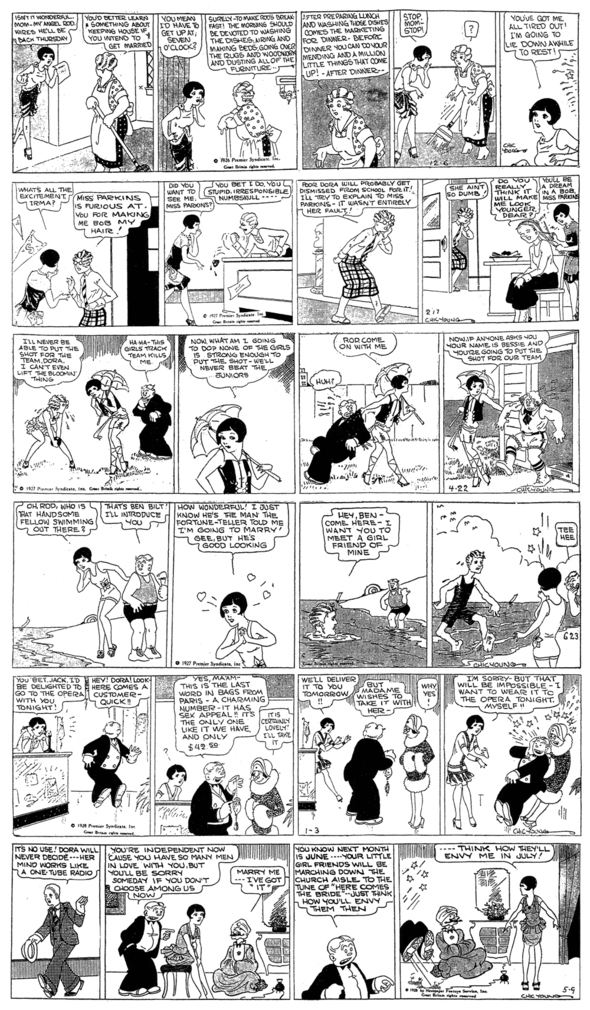 Thanks for looking in.

Here are my replies to last week’s post about Beetle Bailey’s Scandinavian incarnations:

TO Mythagoras-
A lot of countries still have mandatory military service for young men; some have it for women, too, such as Israel. Of course, every country in the west has some military traditions, and Beetle’s hijinks can be easily related to anywhere.

TO Germund-
I don’t remember which was the first foreign Beetle series- I have a few odd samples. Check out this 2012 entry:

Quite a lot of material used to be produced just for comic books, but it was created by Mort Walker’s studio staff, not Walker himself. Now the concentration is on Mort’s newspaper strips, even of great vintage.

TO Spaceman Spiff85-
Perhaps Mr. MkBerg is right, since Beetle has been around for so long, he has a nostalgic component now that will appeal to middle-aged readers. But there are still a lot of younger fans in the territories Egmont publishes for, thus they can sell so many, about thirty, fresh issues a year per title.