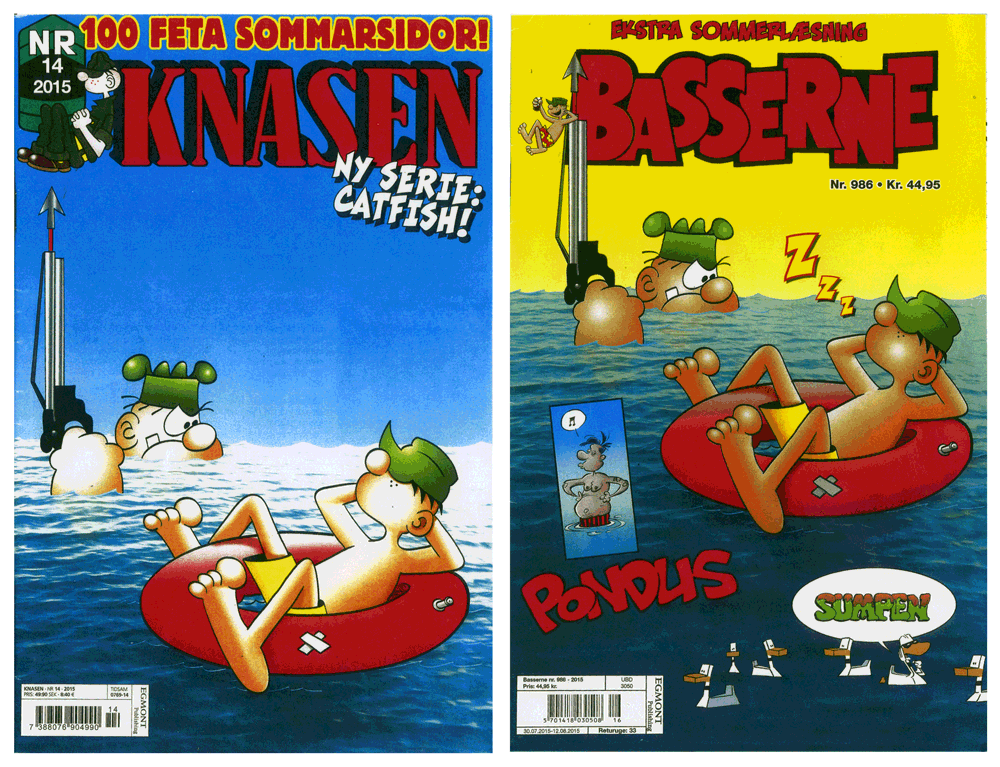 Today is a birthday  for our own Mort Walker, his ninety-second, and tomorrow will be the sixty-third anniversary of his beloved creation, Beetle Bailey.

Beetle has been among the most successful strips America has ever seen, and has  a large international following as well. In Scandinavia, Beetle is one of the top comic book stars, and has been for many years.

The Egmont Company currently prints them. Like many European publications, these come out every two weeks, hence they have numbers instead of dates. Egmont also has other characters, some King Features stars such as Zits , Hagar and Hi & Lois, and also some old favorites like Redeye. They also take some of our competitor’s titles like Creator’s B.C. and United’s Betty in addition to lots of locally produced material. A full mix of funny comics.

Here’s a recent sample of some covers for the BASSERNE (Denmark), BILLY (Norway) and KNASEN (Sweden) editions: 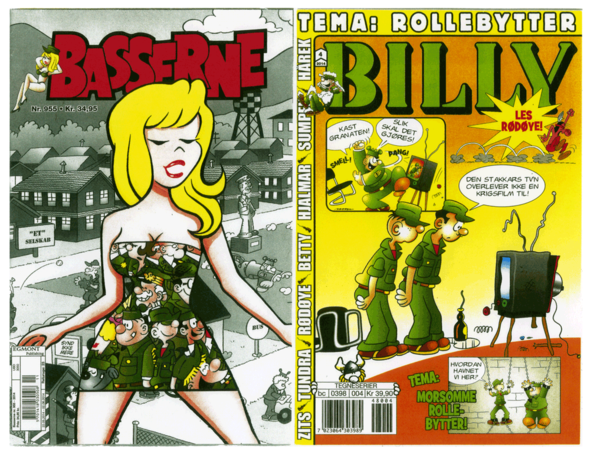 Miss Buxley is worked into a cover regularly; she doesn’t even have to have a gag. 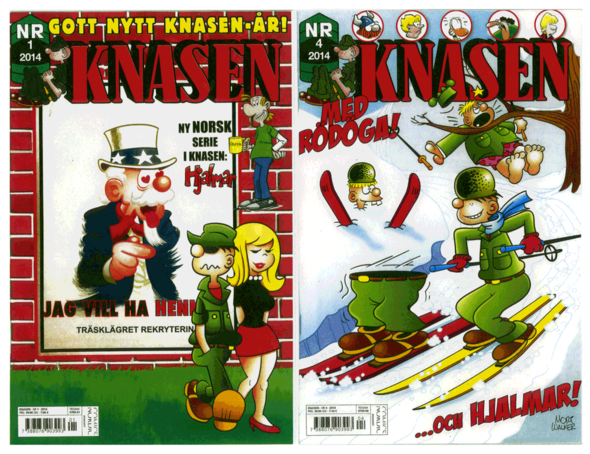 James Montgomery Flagg would be honored. 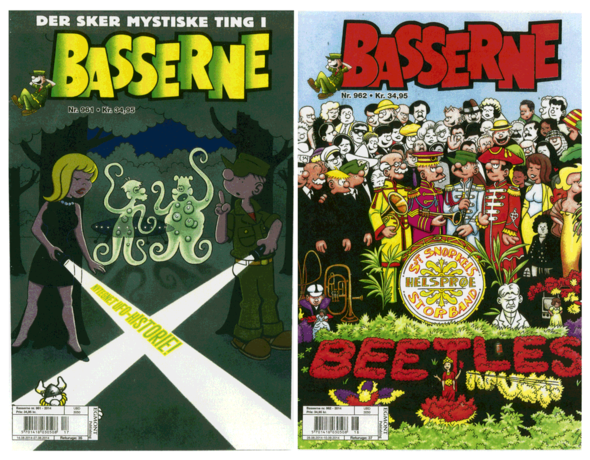 Who’d have thought Zero and Sarge are really calamari from outer space?
Ever hear of a rock hit called SJT. Snorkels Helsprøe Storband by the Beetles?
Those wacky Egmont guys will go a long way to work a pun. 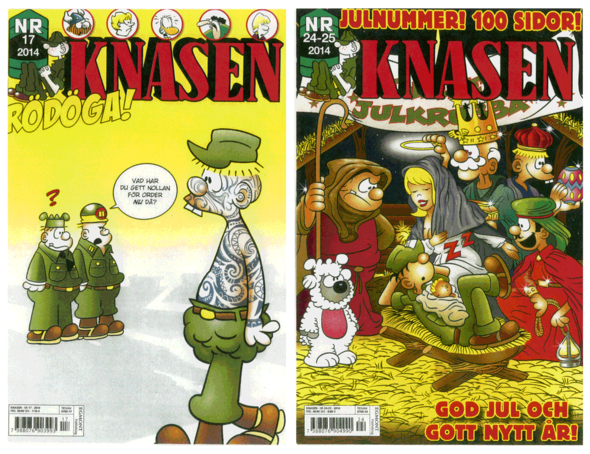 Zero takes a Maori turn; and what’s a little sacrilege between friends? 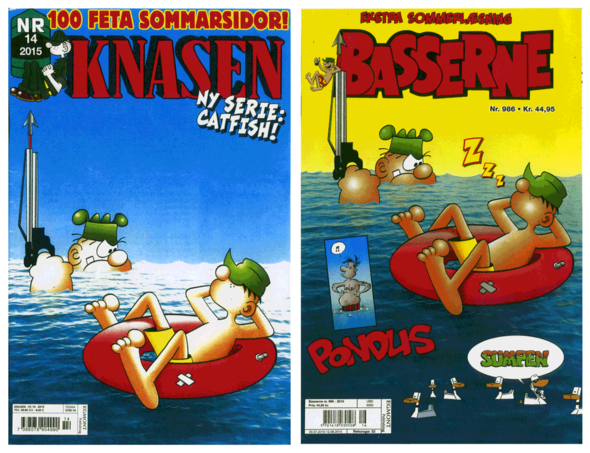 Often all the Beetle comic versions share the same cover art, though with minor changes. 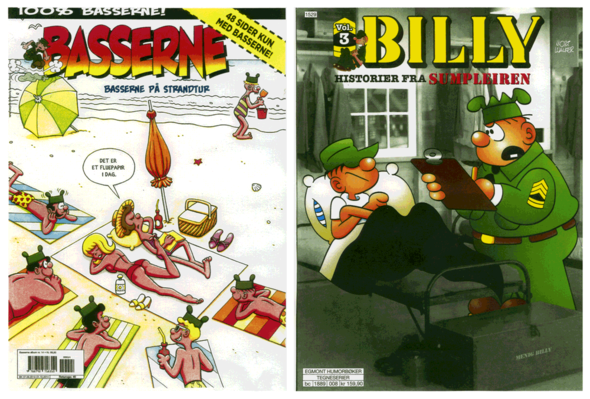 Specials, which are printed throughout the year, are known as “Albums.”

Specials are printed throughout the year, known as “Albums,” which are slightly larger in size than the regular books. These have thin cardboard covers and the title character strips exclusively. There’s no advertising, but then, the regular editions have only ads for other Egmont comics.

Sometimes they have some elaborate graphics, like the use of photo backgrounds. It looks like an old “Viewmaster” scene. 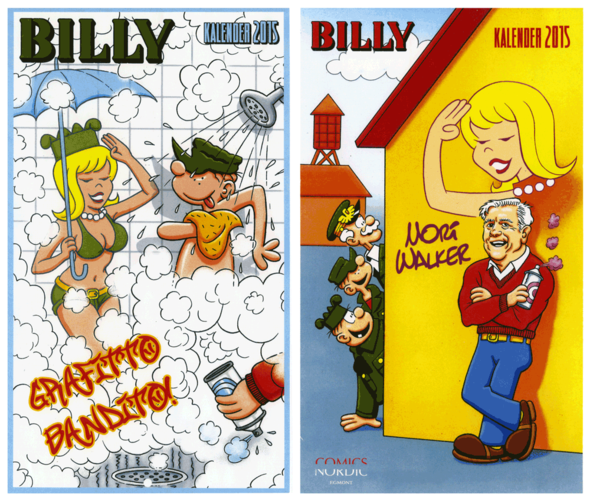 The annual calendar inevitably features more Miss Buxley than Beetle, even some nudity. I guess in the icy northland, political correctness has its limits. In this year’s entry, a graffiti bomber tags huge pin-ups of Miss Buxley on the walls of various Camp Swampy locations. I show the front and back covers, revealing the risqué property damage is all caused by Mort himself!

It’s no problem for me to pick who the best Katzenjammer artists was — it was Harold Knerr. He had a great steady hand, and was very clever about writing intricate cause-and-effect traps for whoever Hans and Fritz’s wrath was to be visited on. Moreso than Dirks. Even his earlier Philly strips (1903-14) were better than most.

Winner was apparently the pick-up replacement for any KFS funny strip, no matter how inept he was at imitating other artists. He often did Swinnerton’s titles, but his long-time appointment was taking over Elmer when Fera died in the 1920’s. His version lasted into the 1950’s.

No info yet on any big KFS books yet. However, when it does, the news will be heralded throughout Comics Kingdom.