For our Canine theme this week, we’ll look at Harold Knerr’s companion strip to The Katzenjammer Kids concerning a bald, roly-poly German fellow named Dinglehoofer. He was also a dog lover, and his entire world seemed to orbit around his two mutts.

16 May 1926: Debut of the strip has the jolly German with his name spelled differently,
but from week two on, it was DingleHoofer.

Herr Dinglehoofer and Adolph would have small-time adventures, usually because the dog got into some kind of reckless but adorable dog mischief. Adolph would sniff out some treat in the kitchen or elsewhere, innocently causing unintended destruction, often involving another small animal he had made a friend or foe out of. All of which led to some embarrassing moments for his master.

More complex continuity stories developed, such as Knerr trying to get Dinglehoofer a girl friend. She was a tall beauty named Polly, who unfortunately treated him like dirt, never appreciating his generosity or efforts to please her. Unfortunately, Adolph often inadvertently sabotaged his master’s endeavors. In the end, Dingy would choose his loyal mutt over the icy blonde.

Other storylines got a bit repetitive: Often, somehow, Dinglehoofer and Adolph became separated, and the stories followed their long, eventful course in being reunited again. Along the way, they meet crooks and farmers and funny critters. One significant day, they find an orphan boy named Tad, who is soon adopted by the lonesome bachelor. In the 1930’s, there were a lot of orphans in the strip world. Instant sympathy comes with them. 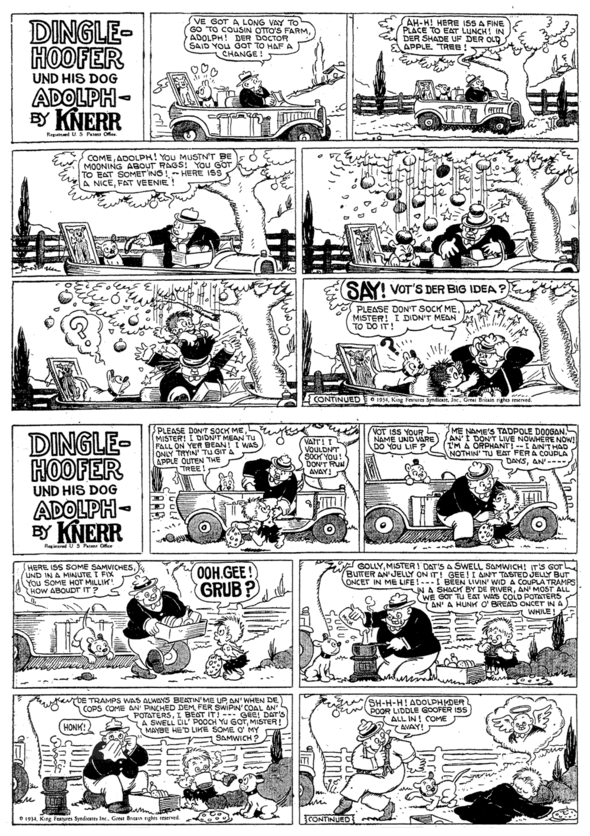 Real-world events influence the comics sometimes. Harold Herring Knerr was sensitive to perceptions of Germans. Not only was he of German extraction himself, but his career was invested in depicting Germans being presented as laugh makers. He started his long career in 1903 doing a Katzenjammer knock-off for the Philadelphia Inquirer, “Der Finehiemer Twins,” before taking over the real thing in 1914.

Hearst had been nervous enough about the public’s attitude toward Germans back in World War One that The Katzenjammers were temporarily renamed “The Shenanigan Kids” from 1918 to 1920.

So instead of viewing Dinglehoofer and maybe the Katzies as well with the fun-loving highjinks intended, a German character, even a dog, with a handle like Adolph couldn’t escape the association with that similarly named fellow in Berlin. 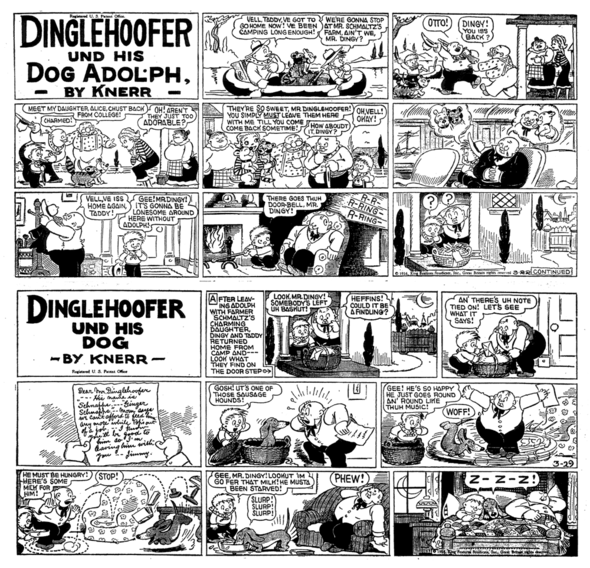 Knerr dumped Adolph with surprisingly little fanfare. After just short of ten years of running around the country, chasing bad guys, dangerous cliff hangers, and over and over again showing their deep loyalty to one another, Dinglehoofer just palms him off to a character we’ve never seen before and, after three panels, never will again.

The replacement for Adolph, Schnapps the Dachshund, arrives in a pretty contrived way the next week. Abandoned like Skeezicks on the doorstep, with a woeful letter from “Jimmy,” a character we won’t even lay eyes on. 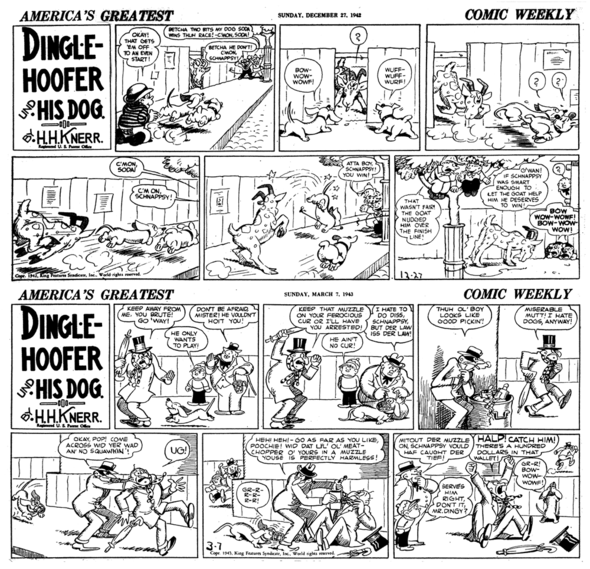 Soon, Knerr dropped long continued stories. Schnappsy just continued where Adolph left off anyway. Now there were just one-shot gags. They aren’t bad; Knerr was usually a very inventive man, right to the end of his life, which was in 1949.

Doc Winner, the King Features clean-up man, took over the Katzies and Dinglehoofer, though not for the first time. He had filled in for Knerr on 18 October and 8 November 1936. Doc took the strip to its termination in early 1952. The Katzenjammer Kids were no longer sold in a full-page size like most of the other Hearst Sunday comics, and the strips that once joined them on the page couldn’t survive on their own, few papers taking them independent of their main strips.

To David Colp,
The new Titan volume, “The Definitive Betty Boop: The Classic Comic Strip Collection,” has Sunday strips up to August 1937, though it did last until November. It’s an extremely rare strip and very hard to locate the later episodes.

To hyhybt,
Glad you enjoyed it. Hope you like Herr Dinglehoofer too.

To John W. Kennedy,
Denslow was an artist who worked to bring the characters of L. Frank Baum to cartoon form. I don’t think you’d find a character like Aunt Tillie stomping about Oz.

To Mike Smith,
Maybe Mr. Fudd set the type, too. Nevertheless, The Kingsport (Tennessee) Times was one of a very few papers to run the strip, and it certainly was nice of them to run the promo. I’ll bet they felt a little gypped;  they ran the ad and started the daily Betty strip in March 1935, just weeks before it was cancelled!

Here’s a few of the Helen Kane pages : you’ll see it was pretty  poorly delineated. 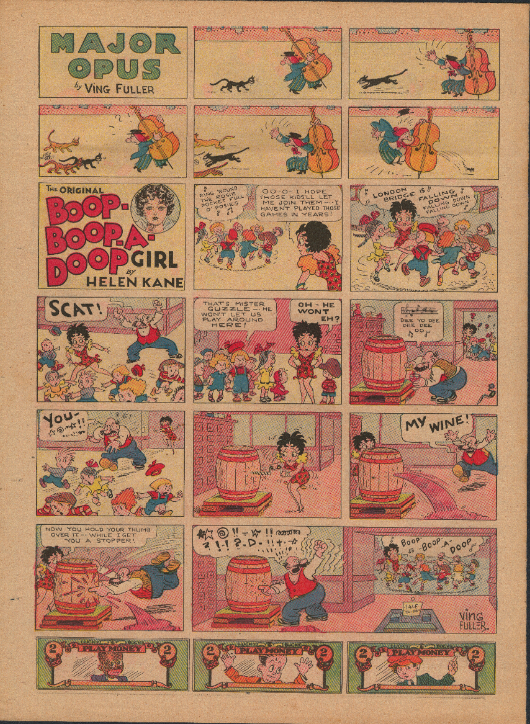 As far as Aunt Tillie having Popeye-like arms, it probably had little intended connection with Popeye,Fleischer Studios and Betty, though it was there.  Even before Popeye, the anchor tattoo on the forearms was just shorthand cartooning for a sailor, or in a wider sense, a low class, low brow, tough mug. Using it for a female character is an unusual choice, though.

Yours until next week when we look in on Billy, Knasen, Basserne and Mort,