The Definitive Betty Boop: The Classic Comic Strip Collection is being published September 15 by Titan Comics. Order your copy today! And now, for a look back at the classic strips…

A rare promo for the short-lived daily Betty Boop strip. They had a lot of problems with Tomorrow.

Good to see you here. Today’s exciting episode takes us to the world of animated cartoon comics. There’s been a lot we could put in this category, both animated cartoons made based on strip stars and strips made with animation stars.

I believe the first cartoon based on a strip was Winsor McCay’s  1911 Little Nemo cartoon. The first strip based on an animation character was John Randolph Bray’s Colonel Heeza Liar in 1917.

Few animated stars had such a meteoric career as Max Fleischer’s Betty Boop. Betty started out as a long-eared dog character with spit curls. It seems obvious that she was a caricature of Paramount Studios’ (who released the Fleischer output in 1930) hot singing and dancing star, Helen Kane.  Helen’s career in big-time Hollywood features was short lived. Betty would grow and grow in popularity though, and Miss Kane went back to vaudeville. By 1934, she had been so eclipsed by Betty, she took Fleischer to court for stealing her likeness and singing style, that of the “boop-oop-a-doop” baby voice .

The trial didn’t last long, and Helen lost.  In the meantime, she had contracted for a strip for KFS (it only ran in the New York Mirror) called “The Original Boop-Boop-A-Doop Girl By Helen Kane.” It was rather incompetently drawn by cartoonist Ving Fuller, who was tasked with making a cartoon character that did everything Betty Boop did, but had to be much different at the same time. The “girl” was supposed to be Helen Kane, who was short and pleasingly plump. However, in the strip, she was very tall, with gigantic bug eyes. The strip was not destined for greatness, even if Miss Kane had won the lawsuit. Her strip outlasted the trial by many weeks, but we were committed to running it. Meanwhile, in July of that year, a Betty Boop daily strip was launched. 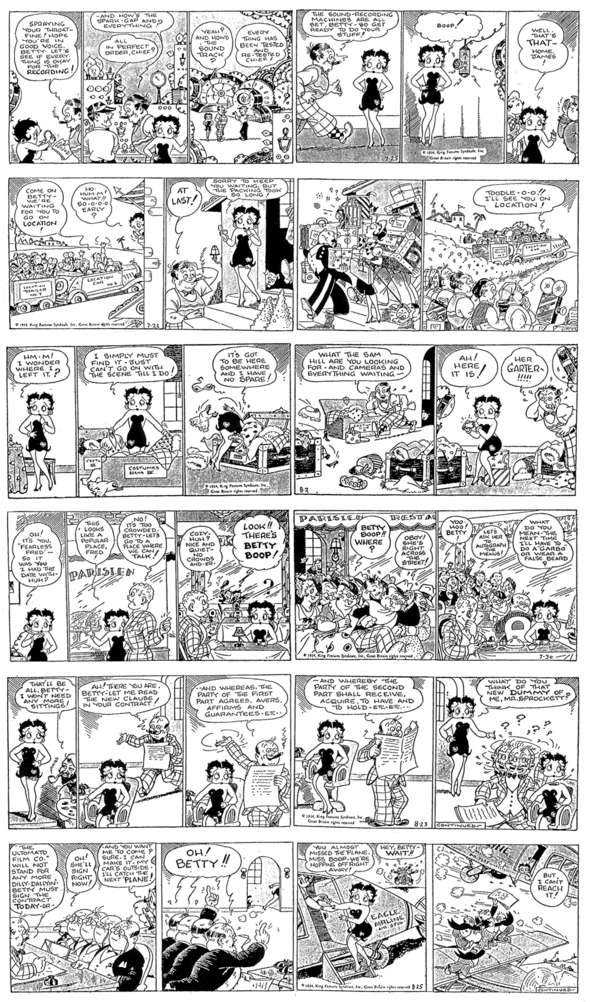 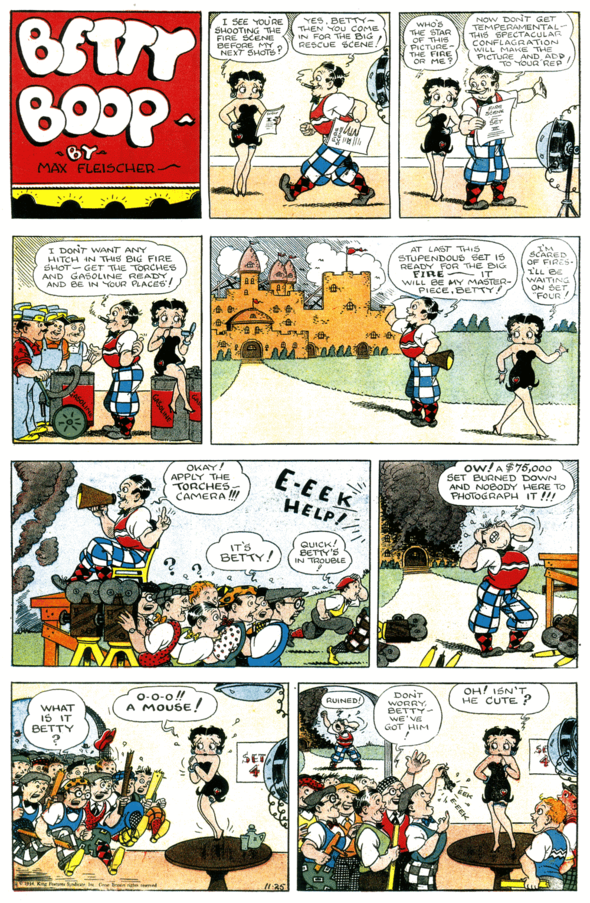 On 25 November Helen was finally gone and Fleisher was invited to fill the space.  Betty Boop’s Sunday strip debuted. Both were drawn by Bud Counihan, a strip maker for about twenty years, who turned out a number of now long-forgotten titles like Pinhead Dooley and The Big Little Family.  Also, a Koko the clown series appeared that day, perhaps as a possible later top comic in the Hearst style for the Sunday Betty page. It seems however that only about seven pages were made as a pilot.  King decided to drop it along with any plans for a Betty full Sunday format series. and we stayed with the “full Tab” size throughout the length of the strip. Most of the time, early on anyway,  the strips bore Saturday dates, intending on Saturday overflow sections in the Hearst chain like the Chicago Herald and Examiner had. But eventually they would be dated for Sundays. 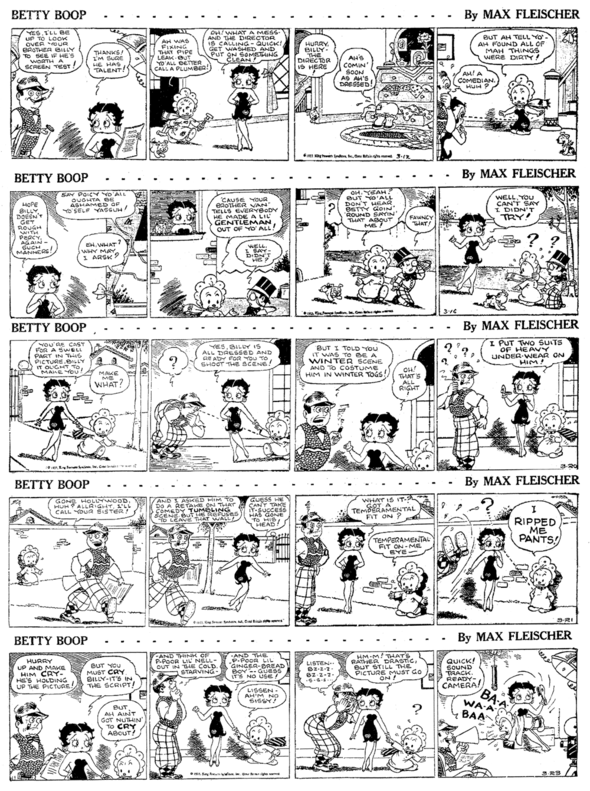 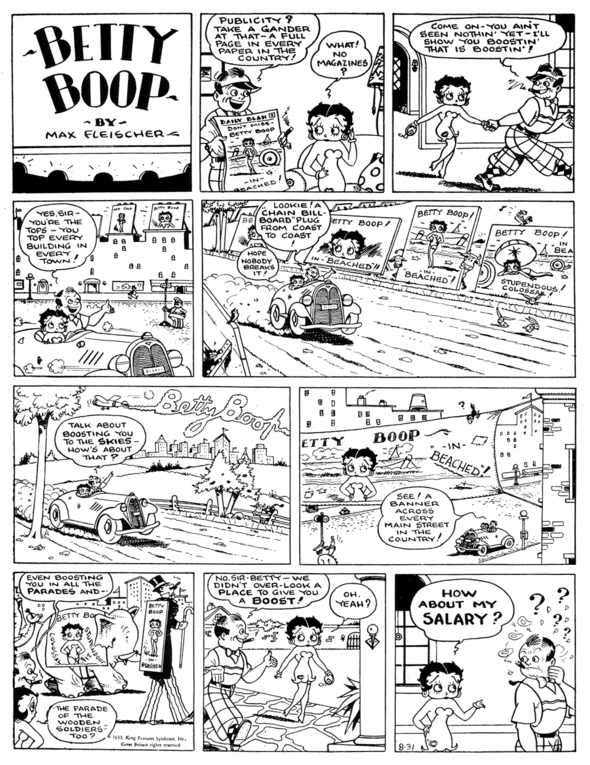 To me, Counihan had a stiff, repetitious style, able to draw about four different faces. The gags were standard for Betty’s role as a movie starlet. One of the more annoying parts of the series was Aunt Tillie, a violent, sailor-tattooed Amazon, who fairly took over the strip about halfway through. Supposedly, Counihan had a small corner at Fleischer’s studio on Broadway where he would draw the strips, but I would like to see what might have been made of it if in fact Fleischer’s animation artists and writers had had a hand in it. 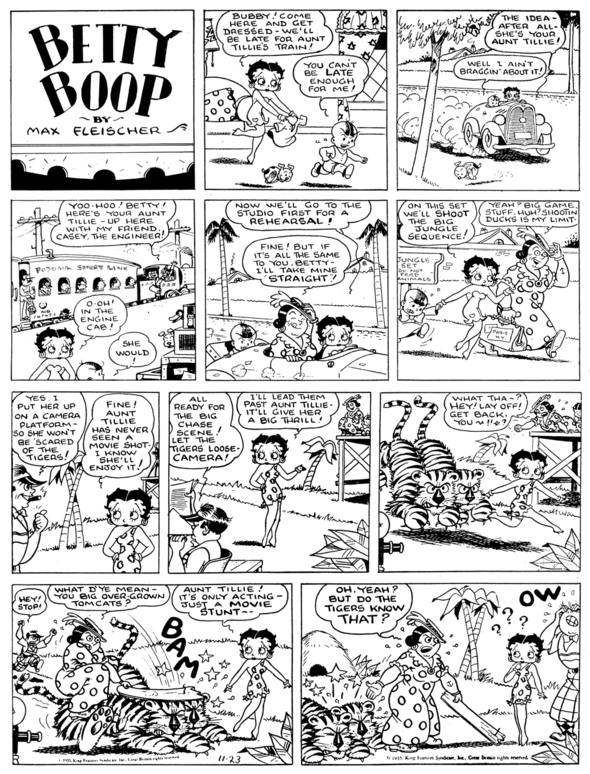 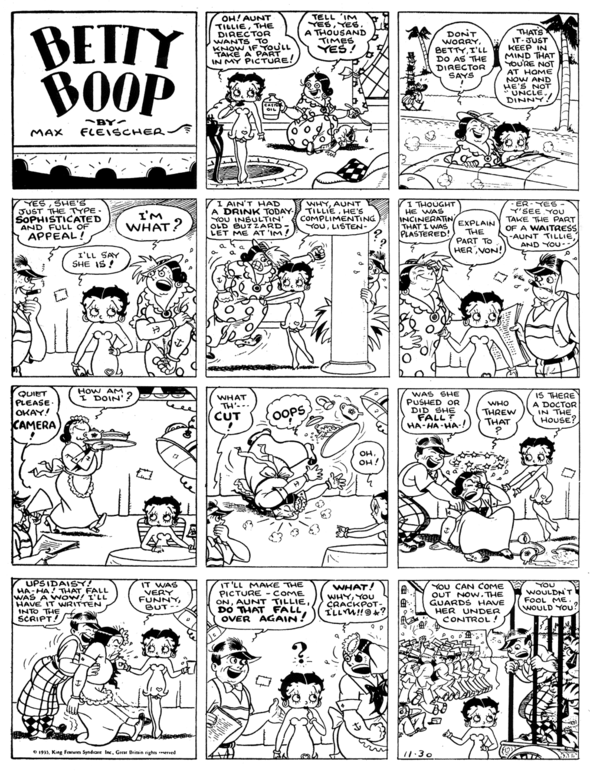 It never became a hit, far from it, it was taken by few client papers. The daily only ran from July 1934 to March 1935. The Sunday ended in November 1937, and by then, it was a very rarely seen strip. Outside of Hearst papers, I know of only the Miami News running it to the end. The cinematic Betty lasted until 1939. 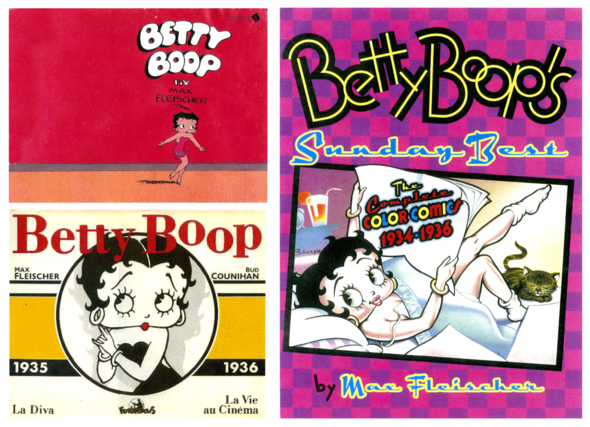 Order your copy of the latest collection being published September 15 by Titan Comics:
The Definitive Betty Boop: The Classic Comic Strip Collection.

And now, to the mailbag:

TO hyhybt-
The Little King lasted until 1975. Here’s the first and last episodes:
http://comicskingdom.com/blog/2014/10/23/ask-the-archivist-the-little-king
His majesty will return soon with the rest of the run, after a few adjustments wayback machine.

TO pschearer-
I remember my own grandmother flattening out tins as proscribed for wartime scrap recycling, and carefully bundling up the newspapers and magazines as well. Though the war had been long over, she maintained these habits. Until the 1970’s, the local Boy Scouts would collect the paper, too.

Why don’t you think my real name is KFS Archive guy?

TO Timothy Fisher-
As far as our men went, most of them in place during WWII were older men, long past their draftable age, except maybe  Clyde Lewis and Fred Lasswell. Some like Lee falk and Alex Raymond signed up anyway and were given officer positions. Several came from the war to King Features, including Dick Wingert, Dave Breger.