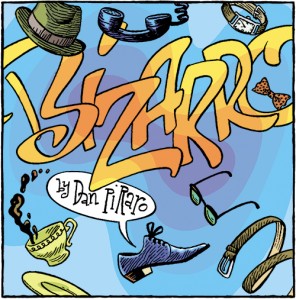 If you’ve missed it, there is only one day left to grab one of my favorite and most popular cartoons on a T-shirt while donating to Roots and Shoots, a kid’s program at the Jane Goodall Institute. A percentage of all sales go to JGI and they promised to use it to teach kids to be better stewards of the planet than our species has previously managed. Hooray! Have a look now, then come back for the weekly roundup of my cartoons!

Bizarro is brought to you today by Excellent Advice.

Today’s big Sunday cartoon addresses my long fascination with hidden furniture. I used to own a sofa bed, as probably most people do or have, but what I really wanted was a Murphy Bed, one of those beds that folds out of a wall. I don’t know why I’m fascinated with those things, I guess for the humor factor of having a bed hidden in your wall. I’m guessing they were (or are, if still being manufactured) as uncomfortable as my old sofa bed used to be. The couple of times I slept on that thing it felt as if I was laying on a bicycle frame with a beach towel thrown over it. 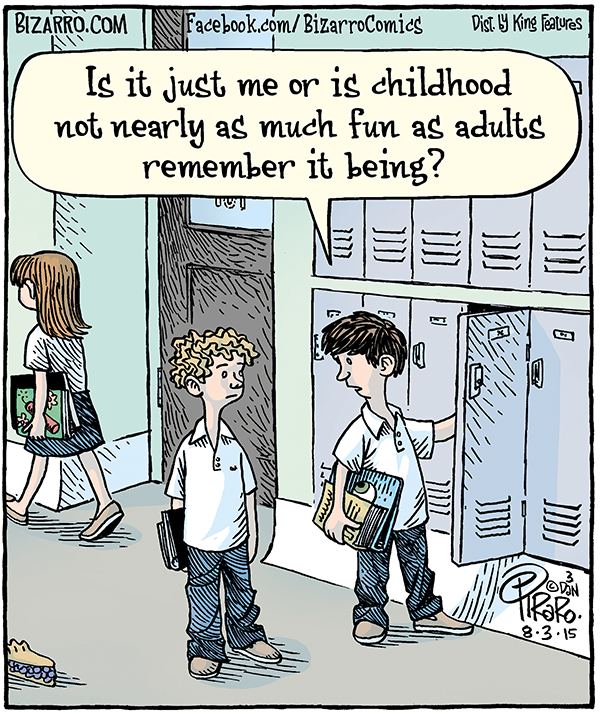 Here’s a gag for the young at heart. Like most adults, I sometimes glorify my memories of childhood but when I really think about it, it was kind of miserable. The complete lack of personal freedom was, in and of itself, a terrific reason not to want to return. School (especially back then when there was no such thing as “alternative” methods of doing anything) was a nightmare of control and oppression by the ruling class. Add to that puberty and the abject fear that social interactions with the “cool kids” or any female I was attracted to would cause and it’s no wonder I laid awake at night worrying. No thanks. I prefer adulthood, even with it’s myriad pitfalls. At least now I don’t care what the cool kids think. 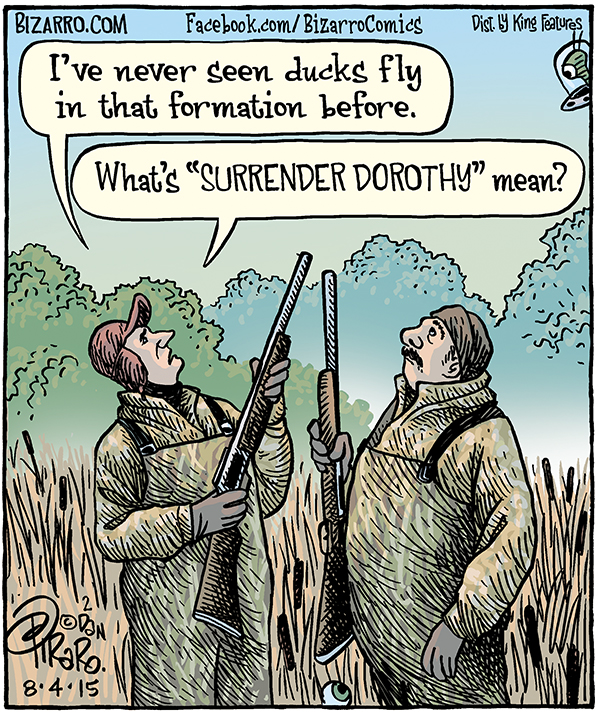 A bit surprisingly, I got a couple of comments this week from readers who did not understand this hunter gag. If you’re unfamiliar with the phrase, “Surrender Dorothy,” just google it. If you find out where it came from and still don’t understand the joke, you’re on your own.

This is just a little nod to the fact that we often confuse the term “UFO” for meaning flying saucer, when it actually is no longer a UFO as soon as you know it is a flying saucer. (Spoken like a true grammar nazi.)  It’s also an amusing example of how couples sometimes argue about trivial matters and ignore the elephant in the room. 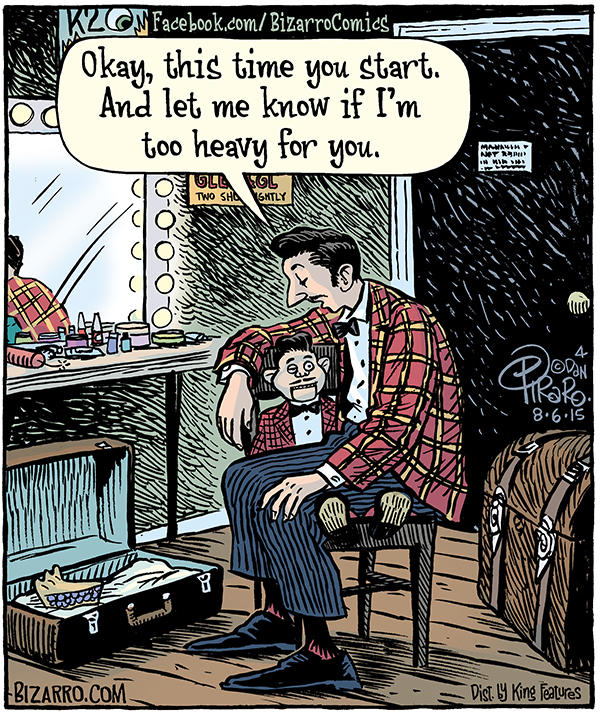 My regular readers know that I love ventriloquism gags and here’s another. My ventriloquists are often the sort who cross the line in their relationships with their “dummies.” Which, to be fair, would be very easy to do since as a ventriloquist you’d likely have very few “real” friends in the first place. 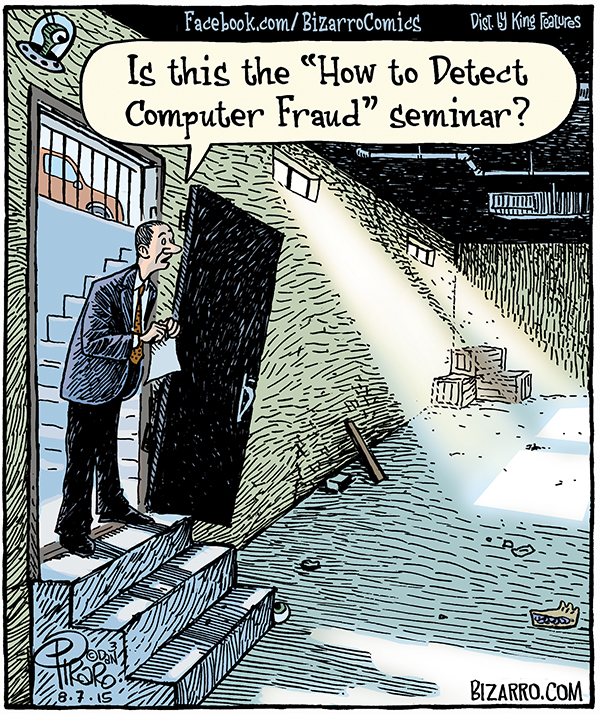 I’m not sure about this humor value of this computer fraud gag. Now and again someone writes an article on how many people each year still lose money because of Internet fraud so I guess there are still people who would fall for the sort of thing this guy seems to have. My rule of thumb is don’t believe anything you see on the Interwebs except this blog. 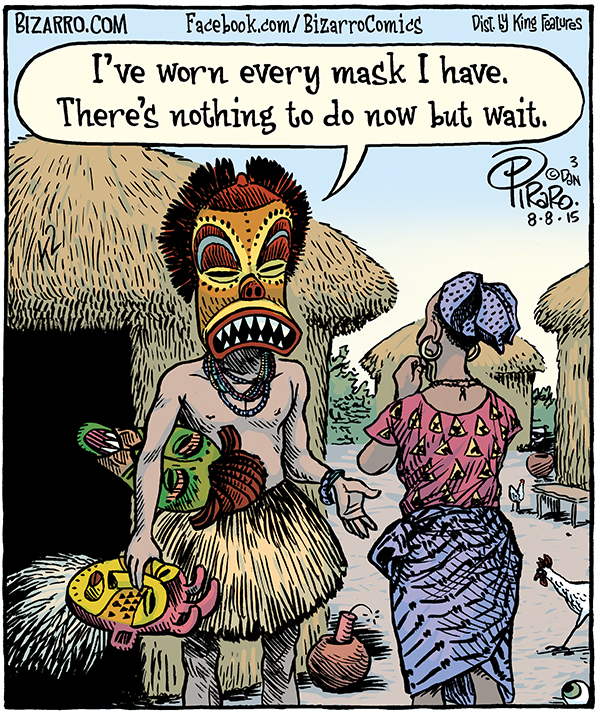 I was also surprised to get a few comments asking me what this cartoon about the African witch doctor meant. I thought the dramatic cliche of a (western) doctor coming out of surgery to tell the family something like, “We’ve done everything we can, the only thing to do now is wait” was pretty common. I guess maybe not as common as I assumed, though. If you didn’t like this setup, perhaps this one will make you chuckle.

That’s it for this week. Don’t forget to grab a T-shirt for yourself if you intended to but got wrapped up in reading this drivel instead. Sale ends tomorrow evening, Monday, Aug 10! Thanks, Jazz Pickles!